The asterism is formed by five bright stars: Deneb, Sadr, Albireo, Rukh, and Gienah. It is easy to locate in the night sky, especially in the summer months, when it is high overhead for observers in northern latitudes. 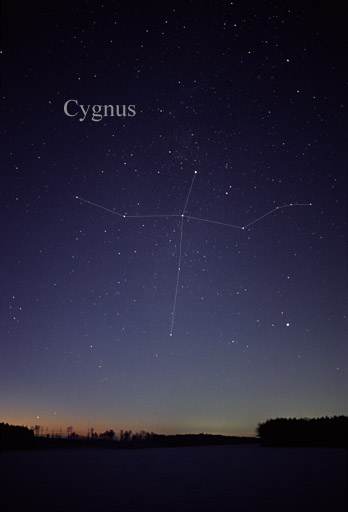 The first step is to find Deneb, the bright star that marks the Swan’s tail. Deneb is one of the three stars of the Summer Triangle, along with the even brighter stars Altair and Vega. The Northern Cross can be found within the Summer Triangle.

Albireo, the second most prominent star in the Northern Cross, marks the Swan’s beak. It is not as bright as Deneb, but can easily be seen without binoculars on a clear night. Albireo is located roughly halfway from Altair to Vega and slightly offset toward Deneb. Once you find Deneb and Albireo, it is easy to make out the pattern of the Northern Cross.

The Northern Cross lies in the direction of the Milky Way’s disk, and the galactic plane (equator) runs through the asterism.

In the northern hemisphere, the cross-shaped pattern is visible for at least part of the night throughout the year. It is most readily seen in the summer, when it rises in the east at sunset, climbs directly overhead after midnight, and moves to the west by sunset.

Deneb marks one end of the “Great Rift” in the Milky Way, a series of dark clouds that stretch all the way to the centre of our galaxy in Sagittarius constellation in the southern sky.

Deneb, Alpha Cygni, is the star at the top of the Northern Cross. It is a highly luminous blue-white supergiant with the stellar classification A2 Ia. Deneb is one of the brightest, largest, hottest stars in our region of the Milky Way. 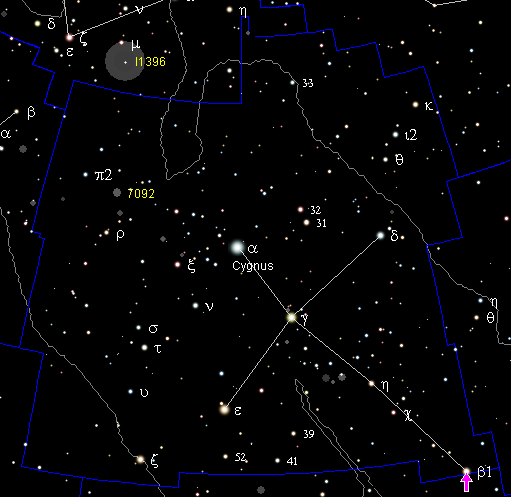 With an apparent magnitude of 1.25, it is the brightest star in Cygnus constellation and the 19th brightest star in the sky. Deneb’s estimated absolute magnitude is -8.38, which makes it one of the most luminous stars known. It is also the most distant of the 30 brightest stars, by a factor of almost 2. It has a diameter 100-200 times that of the Sun.

The name Deneb is derived from the Arabic dhaneb, meaning “tail.” The star was also known as Arided and Aridif, but these names have fallen out of use.

Along with Altair in Aquila and Vega in Lyra constellation, Deneb is one of the vertices of the Summer Triangle. 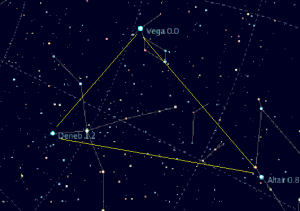 Its exact distance from Earth is uncertain, but current estimates settle on 2,600 light years.

The star’s luminosity is just as difficult to calculate, but estimates range from 54,000 to 196,000 solar luminosities.

Deneb is a very massive star, which means that it will have a relatively short lifespan. It will likely explode as a supernova within the next few million years.

Deneb is a prototype for a class of variable stars known as the Alpha Cygni variables. The star’s surface exhibits non-radial fluctuations and, as a result, its spectral type and brightness change slightly. Its brightness varies from magnitude 1.21 to 1.29.

Sadr, Gamma Cygni, is the central star of the Northern Cross, and marks the Swan’s breast. It is a yellow supergiant star with a visual magnitude of 2.23, located approximately 1,800 light years from Earth.

Sadr has about 12 times the Sun’s mass and 150 times its radius. It is 33,000 times more luminous than the Sun. The star’s estimated age is only about 12 million years. As a result of its mass, Sadr is going through its supply of nuclear fuel rapidly and will have a much shorter life than the Sun.

The star’s name is derived from the Arabic word şadr, meaning “chest.”

Sadr is surrounded by a diffuse nebula called the Sadr region or the Gamma Cygni region. The nebula has the designation IC 1318.

Albireo, Beta Cygni, is the star located at the base of the Northern Cross. It also represents the Swan’s beak.

Located about 400 light years from Earth, Albireo is one of the finest double stars in the night sky, with contrasting blue and yellow components, sometimes described as sapphire and gold. The primary star is an orange giant with a visual magnitude of 3.1 and the secondary component is a blue star with a magnitude of 5.1. The primary component is itself a binary star. Albireo B, the secondary component, is a fast-rotating Be star with a rotational velocity of at least 250 km/s. The Beta Cygni system can easily be resolved in large binoculars and small telescopes.

The two main components, Albireo A and Albireo B, are separated by 35 seconds of arc. It is uncertain whether they form a physical binary system, but if they are, their estimated orbital period is likely at least 100,000 years.

The binary nature of Albireo A was discovered in 1976. The two components are orbiting each other with a period just over 213 years. They are separated by about 0.4 seconds of arc and one needs an instrument of at least 20” in aperture to resolve the individual components.

Albireo is only the fifth brightest star in Cygnus. Even though it got the designation Beta, it is not as bright as Gamma, Delta, and Epsilon Cygni.

Medieval Arabic astronomers called the star minqār al-dajājah, which means “the hen’s beak.” This name was translated into Latin as Rostrum Gallinǣ.

Gienah, Epsilon Cygni, is the easternmost star of the Northern Cross and marks the Swan’s right wing. It is an orange giant belonging to the stellar class K0 III, lying at a distance of about 73 light years from Earth. It has an apparent magnitude of 2.5. The star has a radius almost 11 times solar and is 62 times more luminous than the Sun.

Rukh, Delta Cygni, is the westernmost star in the asterism, and marks the left wing of the Swan. It is really a triple star, consisting of two stars close together and another one more distant from the main pair. 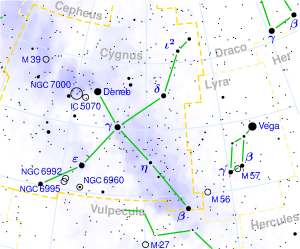 The system lies approximately 165 light years from Earth. The components have an orbital period of 800 years. The main star is a blue-white giant belonging to the spectral class B9. It is a fast spinner, with a projected rotational velocity of at least 135 km/s at the equator.

The close companion of the primary star is a yellow-white star with a magnitude of 6.6. The two stars can be resolved in a medium-sized telescope. The third star in the Delta Cygni system is an orange class K twelfth magnitude star. The combined apparent magnitude of the system is 2.87.

Rukh is one of the eight stars that serve as the North Star, the nearest bright star to the North Celestial Pole, over the course of Earth’s 26,000-year precession cycle. The other stars that lay claim to the name are the current North Star, Polaris in Ursa Minor, Alpha and Kappa Draconis in Draco constellation, Alpha and Gamma Cephei in Cepheus, Vega in in the constellation Lyra, and Tau Herculis in Hercules.

Delta Cygni will take over as the North Star around the year 11,250 and be the nearest bright star to the pole for at least four centuries.

Cygnus constellation culminates at midnight on June 29. For observers in the northern hemisphere, the constellation is best viewed from the early summer to mid-autumn.

The Northern Cross has symbolic meaning to Christians because every year before Christmas it sits upright on the horizon in the north-western sky for observers in northern latitudes.

In Greek mythology, Cygnus constellation is associated with the story of Phaeton, son of the Sun god Helios. Phaeton decided to go for a ride in his father’s chariot, lost control of it, and was thrown from the sky into the river Eridanus. His friend Cycnus, lamenting his death, kept plunging into the river to find him. The gods were moved by his efforts and transformed Cycnus into a swan. In another myth, Cygnus is associated with Zeus himself who seduced Leda in the guise of a swan.

In Chinese and Japanese mythology, the stars between Deneb and Albireo separate two lovers, represented by the bright stars Altair and Vega, who are allowed to meet only once a year. 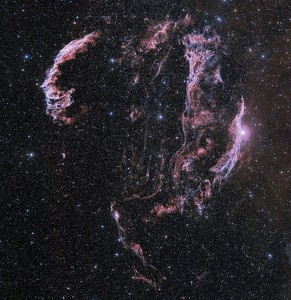 The Northern Cross occupies a region of the sky full of interesting deep sky objects. The North America Nebula lies just to the northeast of Deneb. It can be seen in binoculars in good viewing conditions. The open cluster Messier 39 can be found to the north of the star. It is visible in small telescopes and low-power eyepieces. Another open cluster, Messier 29, can be seen in binoculars just to the south of Sadr, but is better viewed in small telescopes. The Veil Nebula, a supernova remnant, can be seen in a large telescope or a small one with an O-III filter, near Gienah. Cygnus X-1, a famous black hole, lies about halfway along the Swan’s neck.