The Pelican Nebula is an emission nebula located near the bright star Deneb in the constellation Cygnus, the Swan. Named for its resemblance to a pelican, the nebula is associated with the neighbouring North America Nebula (NGC 7000) and is one of several notable nebulae found in the area of the Northern Cross.  It is an active star forming region with a particularly active mix of star formation and evolving gas clouds. The position and balance of the stars and gas will gradually change to leave the nebula looking completely different millions of years from now.

The young stars in the nebula are heating up the cold gas in their vicinity and, as a result, an ionization front gradually moves outward. A number of unusually dense filaments of cold gas are still visible, among them two jets emanating from the Herbig-Haro object 555 (HH 555).

Herbig-Haro objects are jets of matter and partially ionized gas ejected by newborn stars, which appear as patches of nebulosity in star-forming regions. These jets are ejected at speeds of several hundred kilometres per second and collide with nearby dust and gas, producing dramatic shock fronts that glow as a result of the gas being heated as it collides with the interstellar medium.

The jets evolve and are eventually blown away by the wind produced by the young star. They disperse after a few hundreds of thousands of years at most. HH 555 is the most prominent example of this kind of object found in the Pelican Nebula.

The Pelican Nebula is listed as IC 5070 and IC 5067 in the Index Catalogue. The nebula itself is catalogued as IC 5070, while IC 5067 is a prominent part of it, found along the curve of the celestial pelican’s head and neck. It is a ridge of emission spanning about 10 light years, home to many newly formed stars.

The nebula’s appearance is defined by dark dust clouds, which outline the pelican’s long bill and eye, and bright clouds of ionized gas, which form the curved shape of the pelican’s head and neck. 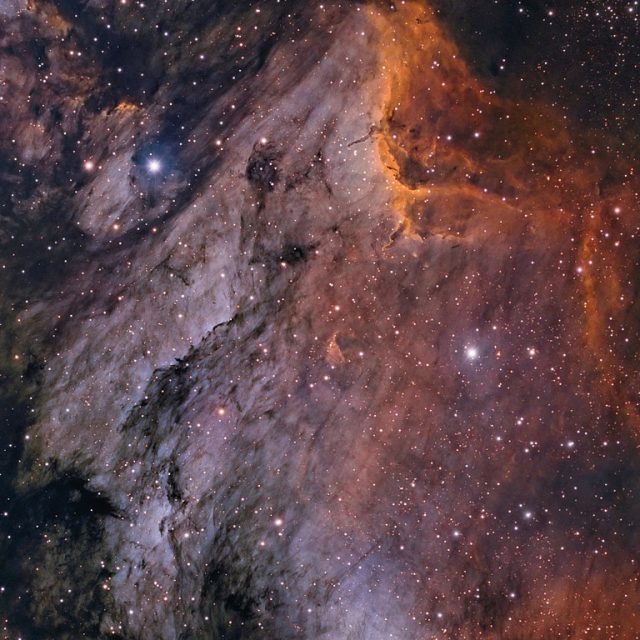 The Pelican Nebula lies at a distance of 1,800 light years and has a visual magnitude of 8.0. It occupies an area of 60′ x 50′ and is separated from the considerably larger North America Nebula by a dark molecular cloud. The two nebulae are parts of the same interstellar cloud of ionized hydrogen, or the same H II region. 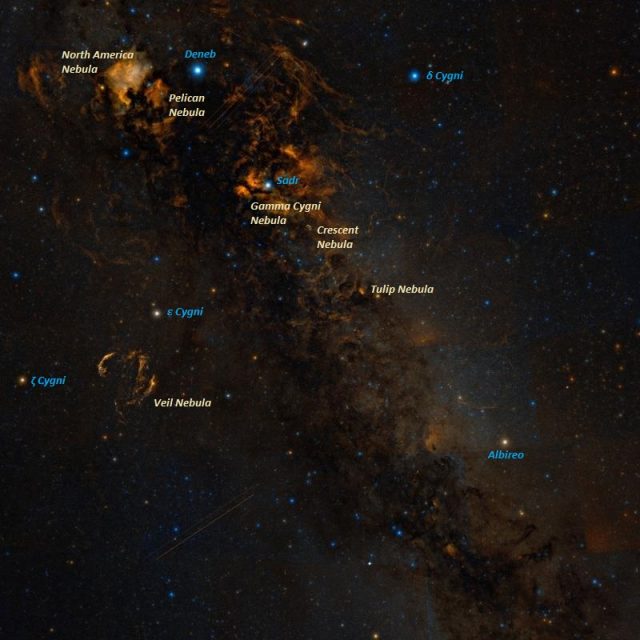