They can be seen in the night sky throughout the year, while other constellations are seasonal, visible only at certain times of year.

The five northern constellations visible from most locations north of the equator throughout the year are Cassiopeia, Cepheus, Draco, Ursa Major, and Ursa Minor.

The three southern circumpolar constellations visible from most locations in the southern hemisphere are Carina, Centaurus, and Crux.

Other constellations are just as prominent in the sky and can be seen for most of the year, but only these eight are circumpolar. 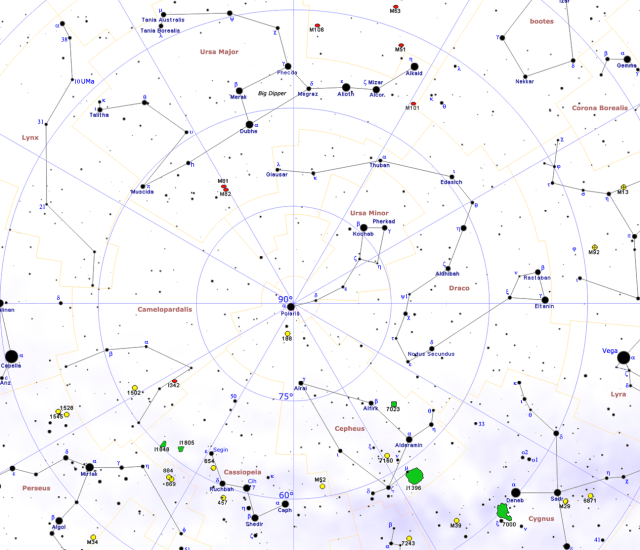 Three of these constellations are very easy to find in the night sky because they are dominated by familiar asterisms, formed by their brightest stars. Ursa Major, the largest of all northern constellations, is known for (and sometimes confused with) the Big Dipper, the smaller Ursa Minor contains the slightly fainter Little Dipper, and Cassiopeia is easily recognized for its prominent W shape.

Draco is the large serpentine constellation wrapped around the much smaller Ursa Minor, with the dragon’s tail found between the two bear constellations and its head pointing toward Hercules. Draco represents Ladon, the dragon that guarded the golden apples on Mount Atlas and was killed by Heracles as part of his 12 labours. The constellation is not particularly prominent despite being one of the largest.

Cepheus, representing Cassiopeia’s husband and Andromeda’s father in Greek mythology, is found between Cassiopeia, Draco and Ursa Minor. It is the 27th largest constellation, only slightly smaller than Orion, and known for its variable stars. However, its brightest star Alderamin, or Alpha Cephei, comes in only 89th on list of the brightest stars. 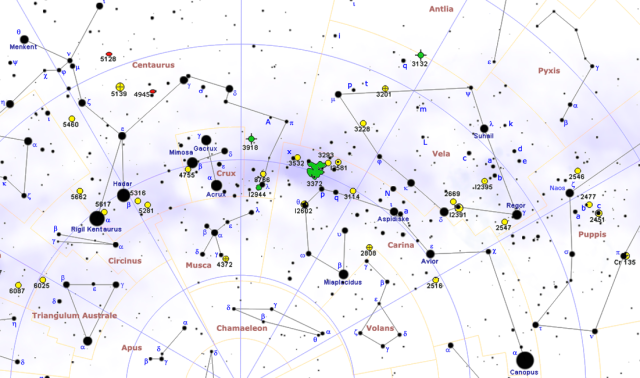 The southern constellations Carina, Centaurus, and Crux are found circling the south celestial pole and can be seen from southern latitudes at any time of year while remaining invisible for observers in most northern locations.

In spite of being the smallest constellation in the sky, Crux is the easiest of the three to identify as it contains the Southern Cross, a familiar grouping of stars that has played a prominent role in many cultures south of the equator. The Southern Cross is featured on the national flags of Australia, New Zealand, Samoa, Papua New Guinea and Brazil. The asterism is formed by five stars, three of which are among the 25 brightest stars in the sky, and is used in navigation, to find true south. Two of its stars – Acrux and Gacrux (Alpha and Gamma Crucis) point the way toward the southern celestial pole.

Carina, which used to be part of the much larger Greek constellation Argo Navis, representing the ship of the Argonauts, marks the keel of the ship. It contains Canopus, the second brightest star in the sky, and Miaplacidus, the 28th brightest star. The constellation is easy to find as most of it lies between Crux on one side and is marked by Canopus on the other.

In addition to these eight, there are other constellations that are circumpolar when seen from different locations. When observed from the North Pole, all fully visible constellations lying north of the celestial equator can be seen throughout the year.  The same goes for the southern constellations: their stars never rise or set, but only rotate around the pole. For observers in equatorial latitudes, there are no circumpolar constellations as the stars change from season to season.