Coma Berenices, or Berenice’s Hair, is a constellation in the northern sky. It was named after the Queen Berenice II of Egypt.

The Greek astronomer Ptolemy considered Coma Berenices to be an asterism in the constellation Leo, representing the tuft at the end of the lion’s tail, and it was not until the 16th century that Berenice’s Hair was promoted to a constellation in its own right, on a celestial globe by the cartographer Caspar Vopel. It is the Danish astronomer Tycho Brahe who is usually credited for the promotion. He included Coma Berenices among the constellations in his star catalogue of 1602.

Coma Berenices is not a large constellation, yet it contains a number of famous deep sky objects, among them the Black Eye Galaxy (Messier 64), Messier 98, Messier 99, Messier 100, the globular cluster Messier 53, the Needle Galaxy (NGC 4565) and the Coma Cluster of galaxies. It also contains the northern part of the Virgo cluster of galaxies.

Also of note, the constellation is home to the North Galactic Pole.

Coma Berenices is the 42nd constellation in size, occupying an area of 386 square degrees. It lies in the third quadrant of the northern hemisphere (NQ3) and can be seen at latitudes between +90° and -70°. The neighboring constellations are Boötes, Canes Venatici, Leo, Ursa Major, and Virgo.

Coma Berenices Constellation Map, by by IAU and Sky&Telescope magazine

Coma Berenices is associated with the story of a historical figure, Queen Berenice II of Egypt. Berenice was married to Ptolemy III Euergetes (fl. 246 BC-221 BC), who went on a dangerous mission against the Seleucids, who had killed his sister, in 243 BC, during the Third Syrian War.

Worried for her husband’s life, the queen swore to Aphrodite that she would cut off her beautiful long, blonde hair if the goddess brought Ptolemy back home safely.

Once her husband returned, Berenice fulfilled her promise to the goddess. She cut off her hair and placed it in Aphrodite’s temple. The hair disappeared the next day. This made the king furious. To appease him, the court astronomer Conon said that Aphrodite was so pleased with Berenice’s offering that she had placed it in the sky, pointing to the group of stars that have since been known as Berenice’s Hair.

Diadem is the second brightest star in Coma Berenices, with an apparent magnitude of 4.32. It represents the gem in Queen Berenice’s crown. The word itself is derived from the Greek διάδημα (diádēma), which means “band” or “fillet.”

Diadem is a binary star composed of two stars belonging to the spectral class F5V, with magnitudes of 5.05 and 5.08. The system is approximately 63 light years distant. The two stars appear nearly edge-on, as if they were moving back and forth in a straight line, separated at most by only 0.7 arc seconds.

Alpha Comae Berenices is sometimes known by its other traditional name, Al Zafirah, from the Arabic word for “the braid.”

Beta Comae Berenices is the brightest star in the constellation, despite the beta designation, with an apparent magnitude of 4.26. It is a main sequence dwarf star, 29.78 light years distant from the solar system. It is similar to the Sun, only slightly larger and brighter. No planets have yet been discovered in its orbit.

Gamma Comae Berenices is a giant star belonging to the spectral class K1II. It has an apparent magnitude of 4.350 and is approximately 170 light years distant.

FK Comae Berenices is a variable star with an apparent magnitude that varies between 8.14 and 8.33 over a period of 2.4 days. It serves as the prototype for an entire class of variable stars, the FK Com class. These stars are believed to be variable as a result of having large cold spots on their rotating surfaces.

The Black Eye Galaxy (Messier 64) is a spiral galaxy with an apparent magnitude of 9.36, lying approximately 24 million light years from Earth. It is sometimes also called the Sleeping Beauty Galaxy or Evil Eye Galaxy. 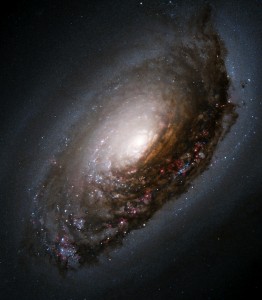 It is a popular object among amateur astronomers, as it can be easily observed in small telescopes. The Black Eye Galaxy has a bright nucleus and a dark band of dust in front of it, which earned it the nickname the Evil Eye.

The galaxy is an unusual one; the gas in its outer regions rotates in the opposite direction from the stars and gas in its inner regions. Astronomers speculate that this could be a result of M64 having absorbed a smaller satellite galaxy about a billion years ago.

The inner region spans only 3,000 light years in radius, while the outer parts extend to another 40,000 light years. The region separating the two is a site of active star formation.

M64 was independently discovered by Edward Pigott and Johann Elert Bode in 1779, and then by Charles Messier, who included the galaxy in his catalogue in 1780.

The Black Eye can be found one degree east-northeast of the star 35 Comae Berenices.

The Needle Galaxy is one of the most famous edge-on spiral galaxies in the sky. It was discovered by Sir William Herschel in 1785.

The galaxy can be seen in a small telescope. It lies exactly above the North Galactic Pole, a degree east of the star 17 Comae.

The galaxy has an apparent magnitude of 10.42 and is approximately 42.7 million light years distant.

Based on the shape of the central bulge, astronomers believe that NGC 4565 is a barred spiral galaxy. Being 16 arc minutes in length, it has the largest apparent length of any edge-on galaxy discovered.

The Coma Star Cluster is a small star cluster with about 40 bright stars of magnitudes between 5 and 10. The stars in the cluster share a common proper motion.

The cluster was catalogued by P.J. Melotte. It spans over 7.5 degrees in the sky. It is believed to be around 450 million years old and lies approximately 280 light years from Earth.

The Coma Cluster of galaxies lies north of the Virgo Cluster, but is significantly more remote, between 230 and 300 million light years from the solar system.

The Coma Cluster contains about 1,000 large galaxies and 30,000 smaller ones, a great majority of them brighter than 19.0.

The brightest galaxies in the group are of thirteenth magnitude. They are NGC 4889 and NGC 4874.

Another notable member is NGC 4921, one of the comparatively few spirals in the group and the brightest spiral galaxy in the cluster.

The constellation Coma Berenices contains the northern part of the Virgo Cluster of galaxies, sometimes called the Coma-Virgo Cluster. The cluster is located roughly 60 million light years from Earth.

Round in shape and with a very bright centre, the cluster was discovered by Johann Elert Bode in 1775 and then independently by Charles Messier two years later.

It is one of the more distant globular clusters known. It has an apparent magnitude of 8.33. The stars in the cluster are mostly metal-poor.

M53 can be found a degree northeast of the star Alpha Comae Berenices. It is the brightest Messier object in the constellation. It can be seen with binoculars.

Messier 100 is a grand design spiral galaxy in Coma Berenices. It has a brilliant core, two main spiral arms and a number of less prominent ones, as well as a few dust lanes.

The galaxy lies in the Virgo cluster and is one of the brightest member galaxies in it. It also has the largest apparent size, seven arc minutes across.

Messier 100 is about 160,000 light years in diameter and approximately 55 million light years distant. It has an apparent magnitude of 10.1. It was discovered by Pierre Méchain on March 15, 1781. It was one of the first spiral galaxies ever discovered.

Five supernovae have been observed in the galaxy.

M100 contains a satellite galaxy, NGC 4323, which is about 52.5 million light years distant and has an apparent magnitude of 15.7.

Messier 85 is a lenticular galaxy in Coma Berenices. It is one of the most distant Messier objects, lying approximately 60 million light years away.

It is the northernmost member of the Virgo cluster of galaxies. A supernova was discovered in M85 in December 1960.

The galaxy is interacting with two smaller neighbours; the spiral galaxy 4394 and elliptical galaxy MCG 3-32-38.

Messier 99 is an unbarred spiral galaxy with an apparent magnitude of 10.4, approximately 50.2 million light years distant. It was discovered by Pierre Méchain in 1781 and subsequently included in the Messier Catalogue by Charles Messier. Three supernovae have been observed in the galaxy.

M99 is believed to have been distorted by the nearby possible dark galaxy VIRGOHI21, to which it appears to be linked by a bridge of neutral hydrogen gas.

Messier 88 is a spiral galaxy, discovered by Charles Messier in Coma Berenices in 1781.

It has an apparent magnitude of 10.4 and is approximately 47 million light years distant. It is classified as a type 2 Seyfert galaxy; it produces narrow spectral line emissions from highly ionized gas in its nucleus. 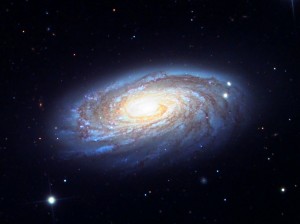 The galaxy has multiple spiral arms and a supermassive black hole in its centre, one that has 80 million times the mass of the Sun.

M88 is one of the 15 Messier objects that lie in the Virgo Cluster of galaxies. A supernova was observed in the galaxy in 1999.

Messier 91 is a barred spiral galaxy that also belongs to the Virgo Cluster. It was discovered by Charles Messier in 1781. It has an apparent magnitude of 11.0 and is approximately 63 million light years distant.

Messier 98 is an intermediate, elongated spiral galaxy with an apparent magnitude of 11.0. It appears almost edge-on. It has a small core and large, faint spiral arms.

M98 is located half a degree west of the star 6 Comae, or one and a half degrees west-northwest of Messier 99.

The galaxy lies approximately 54.1 million light years from Earth. It was first observed by Pierre Méchain in 1781 and catalogued by Charles Messier the same year.

M98 is located within the Virgo Cluster.

NGC 4889 is a supergiant elliptical galaxy located in the Coma Cluster. It has an apparent magnitude of 11.4 and is approximately 308 million light years distant. The galaxy can be found in the vicinity of the star Beta Comae Berenices.

NGC 4147 is a small, relatively faint globular cluster with an apparent magnitude of 10.2. It appears diffuse in smaller telescopes, but larger ones reveal a bright cluster, round in shape, without a brighter, well-defined core.