Mensa constellation lies in the southern hemisphere. Its name means “the table” in Latin.

Next to Octans, Mensa is the southernmost of the 88 constellations and it cannot be observed from the northern hemisphere. The constellation was introduced by the French astronomer Nicolas Louis de Lacaille in the 18th century. Lacaille named it Mons Mensae, or Table Mountain, after the mountain in South Africa, from where he had observed the constellations in the southern sky.

Mensa does not contain any stars brighter than fifth magnitude and, other than a part of the Large Magellanic Cloud, does not have any notable deep sky objects.

Mensa is the 75th constellation in size, occupying an area of only 153 square degrees. It is located in the first quadrant of the southern hemisphere (SQ1) and can be seen at latitudes between +4° and -90°. The neighboring constellations are Chamaeleon, Dorado, Hydrus, Octans and Volans.

Mensa contains two stars with known planets and does not have any Messier objects. The brightest star in the constellation is Alpha Mensae, with an apparent magnitude of 5.09. There are no meteor showers associated with the constellation.

Mensa is not associated with any myths. Lacaille created it out of dim southern stars to commemorate Table Mountain near Cape Town in South Africa, from where he observed and catalogued southern stars in 1751 and 1752. Mensa contains a part of the Large Magellanic Cloud, which makes the constellation appear as if it were capped by a white cloud, similar to the way clouds cap the Table Mountain.

Lacaille originally named the constellation Montagne de la Table on his planisphere from 1756, but later Latinized it to Mons Mensae in the second edition in 1763. The English astronomer John Herschel suggested shortening the constellation’s name to Mensa, and in 1845, Francis Baily adopted this suggestion in his British Association Catalogue.

The star is a yellow main sequence dwarf with the stellar classification of G5 V. It has roughly the same mass and radius as the Sun, and 83 percent of the Sun’s luminosity. It has a red dwarf companion at a separation of 3.05 arc seconds.

Gamma Mensae is the second brightest star in Mensa. It has an apparent magnitude of 5.18 and is approximately 101 light years distant from the Sun.

Gamma Mensae is a double star with the stellar classification K4III, which means that the primary component in the system is an orange giant.

Beta Mensae is the third brightest star in the constellation. It has an apparent magnitude of 5.302 and is approximately 640 light years distant. It is a yellow giant star belonging to the stellar class G8III.

Theta Mensae is a blue-white giant star with the stellar classification of B9.5V. It has an apparent magnitude of 5.45 and is approximately 356 light years distant from Earth.

Mu Mensae is another blue giant in Mensa. It belongs to the spectral class B8II-IIISi. It has an apparent magnitude of 5.54 and is approximately 483 light years distant from the solar system.

Zeta Mensae is a white giant with the stellar classification A5III. It has an apparent magnitude of 5.61 and is 403.97 light years distant from the Sun.

Pi Mensae is a yellow subgiant belonging to the stellar class G1IV. It has a visual magnitude of 5.67 and is 59.7 light years distant from Earth. The star has a high proper motion.

The star has 1.1 times the Sun’s mass, 2.1 times the radius, and is 4.73 times more luminous than the Sun. It is one of the top 100 target stars for the planned Terrestrial Planet Finder mission.

An extrasolar planet was discovered orbiting the star in October 2001. It is a massive superjovian planet, with a mass at least 10.27 times that of Jupiter, which makes it one of the most massive planets known. It orbits the star every 2,151 days (5.89 years). It has an eccentric orbit and passes through the habitable zone over the course of its orbit, so if there were any Earth-like planets there, the planet would likely have disrupted their orbits and maybe even thrown them into the star or out of the system, into the interstellar medium.

Lambda Mensae is an orange giant belonging to the stellar class K0III. It has an apparent magnitude of 6.54 and is 385.80 light years distant from the Sun. It has 27 times the Sun’s luminosity and is only the 24th brightest star in Mensa constellation.

W Mensae is a yellow-white supergiant star with the stellar classification of F8Iabp. It is classified as an R Coronae Borealis type variable star. The star is located in the Large Magellanic Cloud galaxy, approximately 168,000 light years from earth. It has a maximum apparent magnitude of 13.8 and can only be seen in a larger telescope.

R Coronae Borealis variables are a rare class of stars, often called “inverse novae” because they exhibit sudden and dramatic drops in brightness. When at minimum, W Mensae has a visual magnitude of only 18.3.

The star’s variability was discovered by the Dutch-American astronomer W. J. Luyten in 1927.

The Large Magellanic Cloud is an irregular galaxy only 163,000 light years distant from Earth. It is a satellite galaxy of the Milky Way and the third closest galaxy to our own, next to the Sagittarius Dwarf Spheroidal galaxy in Sagittarius and the Canis Major Dwarf Galaxy in Canis Major constellation. 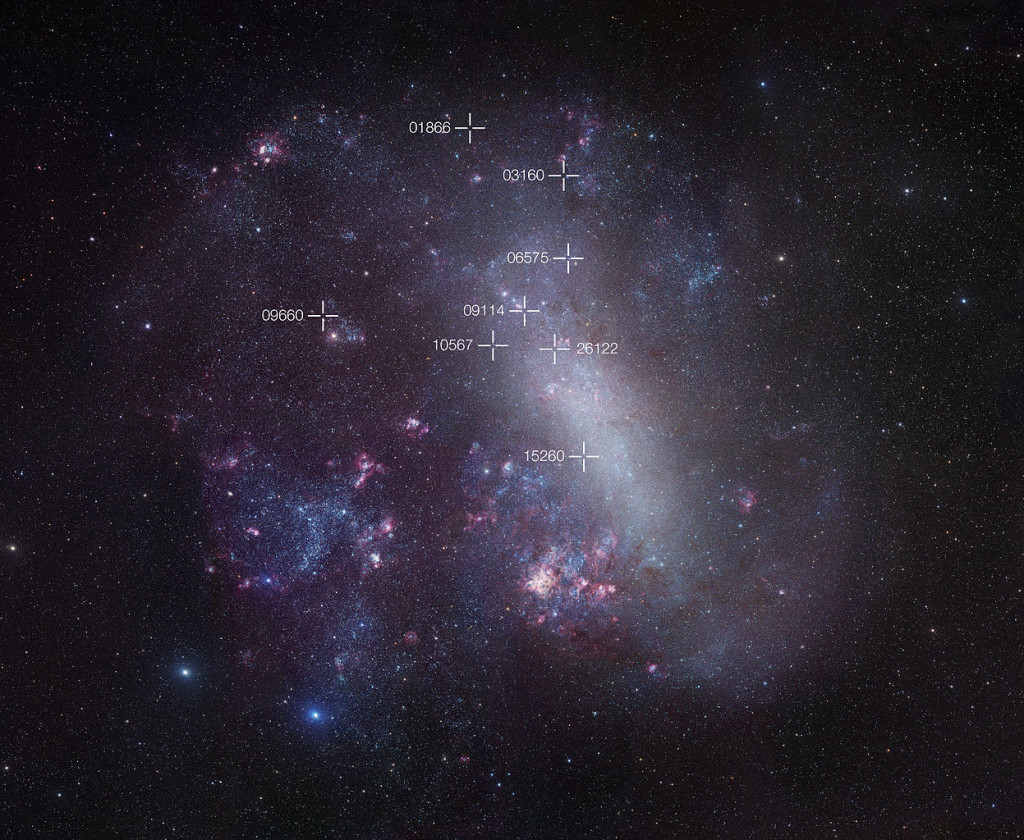 This photograph shows the Large Magellanic Cloud, a neighbouring galaxy to the Milky Way. The positions of eight faint and rare cool eclipsing binary stars are marked with crosses (these objects are too faint to appear directly in this picture). By studying how their light changes, and other properties of these systems, astronomers can measure the distances to eclipsing binaries very accurately. A long series of observations of these objects has now led to the most accurate determination so far of the distance to the Large Magellanic Cloud — a crucial step in the determination of distances across the Universe. Image: ESO, R. Gendler

The Large Magellanic Cloud is about 14,000 light years in diameter and about 1/100 as massive as the Milky Way. It is the fourth largest galaxy in the Local Group, after the Andromeda Galaxy, the Milky Way, and the Triangulum Galaxy (M33). It appears as a faint cloud on the border between Mensa and Dorado constellation. The larger part of the galaxy is located in Dorado.

The galaxy has a prominent bar in its centre and is believed to have once been a barred spiral galaxy, but its shape got distorted as a result of interactions with the Milky Way and the Small Magellanic Cloud, located in Tucana constellation.

NGC 1987 is a globular star cluster in Mensa. It has a visual magnitude of 12. The cluster was discovered by John Herschel in 1834.

NGC 1987 – Based on observations made with the NASA, ESA Hubble Space Telescope, and obtained from the Hubble Legacy Archive, which is a collaboration between the Space Telescope Science Institute (STScI, NASA), the Space Telescope European Coordinating Facility (ST-ECF, ESA) and the Canadian Astronomy Data Centre (CADC, NRC, CSA).

PKS 0637-752 is a quasar (quasi-stellar radio source) in Mensa constellation. It has a large gas jet which is visible in both optical and X-ray wavelengths. The quasar is about 6 billion light years distant from Earth.

In an optical telescope, the quasar appears like a star, but PKS 0637-752 is a very luminous quasar, radiating with the power of 10 trillion Suns from an area which is smaller than our solar system.

The source of its energy is believed to be a supermassive black hole. Its extended radio jet spans at least 200,000 light years.