Andromeda Galaxy (also known as Messier 31, M31, or NGC 224) is a spiral galaxy located in the Andromeda constellation.

Andromeda Galaxy is one of the most famous objects in the night sky, and the nearest spiral galaxy to our own, the Milky Way. It is on a collision course with the Milky Way, and the two galaxies are expected to merge in about 4 billion years.

The Andromeda Galaxy is located at a distance of about 2.54 million light years from Earth. With an apparent visual magnitude of 3.44, it is the most distant object visible to the naked eye, and one of the brightest deep sky objects listed in Messier’s catalogue.

Andromeda is the closest spiral galaxy to the Milky Way and belongs to the Local Group of galaxies, along with our own galaxy, the Triangulum Galaxy (Messier 33) in Triangulum constellation, and about 30 smaller galaxies.

Andromeda is classified as a SA(s)b galaxy. It is the largest galaxy in the Local Group, but may not be more massive than the Milky Way, which is believed to contain more dark matter.

The Andromeda Galaxy underwent a collision with one of its satellite galaxies, Messier 32 (M32) over 200 million years ago, which left M32 stripped of more than a half of its mass and created several rings within Andromeda. The Hubble Space Telescope has documented a double nucleus at the galaxy’s centre, which is either an illusion created by a dust cloud in front of the single nucleus, or it indicates that, once upon a time, Andromeda swallowed a smaller galaxy and the second nucleus is a result of the collision.

The Andromeda Galaxy is home to a trillion stars, which is at least twice as many stars than the Milky Way contains, based on information provided by the Spitzer Space Telescope in 2006.

The existence of the galaxy was first documented in 964 by the Persian astronomer Abd al-Rahman al-Sufi in his Book of Fixed Stars. He described it as a small cloud. German astronomer Simon Marius was the first to describe the object after observing it through a telescope in 1612. In 1764, Charles Messier included it in his catalogue and labelled it M31.

Even though the galaxy was first photographed in 1887 by the Welsh engineer and astronomer Isaac Roberts, it was still believed to be a nebula within the Milky Way Galaxy. It was not until 1925 that American astronomer Edwin Hubble proved conclusively that the Great Andromeda Nebula was in fact a galaxy independent of the Milky Way.

Andromeda is believed to have formed as a result of a collision of two smaller galaxies approximately 5-9 billion years ago.

The galaxy contains a notable deep sky object: NGC 206. It is the brightest star cloud in the galaxy, originally discovered by William Herschel in 1786.

How to find the Andromeda Galaxy

The Andromeda Galaxy can be seen without binoculars even from places where there is moderate light pollution. When seen through a telescope, it is over six times wider than the full Moon, but when observed with the naked eye, binoculars or a small telescope, only the galaxy’s bright central region is visible.

COLLISION WITH THE MILKY WAY

Andromeda is approaching the Milky Way at an approximate speed of 100-140 kilometres per second. The two galaxies are expected to collide in about 3.75 billion years. As a result, they will likely merge into a giant elliptical galaxy. 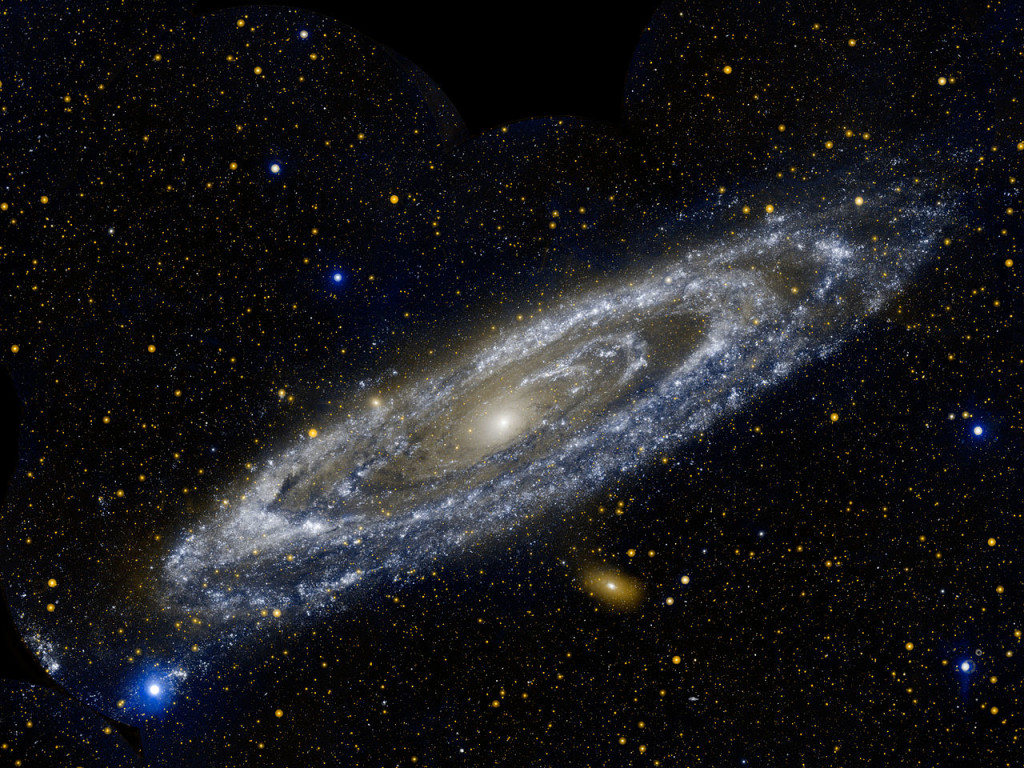 Hot stars burn brightly in this image from NASA’s Galaxy Evolution Explorer, showing the ultraviolet side of a familiar face. At approximately 2.5 million light-years away, the Andromeda galaxy, or M31, is our Milky Way’s largest galactic neighbor. The entire galaxy spans 260,000 light-years across — a distance so large, it took 11 different image segments stitched together to produce this view of the galaxy next door. The bands of blue-white making up the galaxy’s striking rings are neighborhoods that harbor hot, young, massive stars. Dark blue-grey lanes of cooler dust show up starkly against these bright rings, tracing the regions where star formation is currently taking place in dense cloudy cocoons. Eventually, these dusty lanes will be blown away by strong stellar winds, as the forming stars ignite nuclear fusion in their cores. Meanwhile, the central orange-white ball reveals a congregation of cooler, old stars that formed long ago. When observed in visible light, Andromeda’s rings look more like spiral arms. The ultraviolet view shows that these arms more closely resemble the ring-like structure previously observed in infrared wavelengths with NASA’s Spitzer Space Telescope. Astronomers using Spitzer interpreted these rings as evidence that the galaxy was involved in a direct collision with its neighbor, M32, more than 200 million years ago. Andromeda is so bright and close to us that it is one of only ten galaxies that can be spotted from Earth with the naked eye. This view is two-color composite, where blue represents far-ultraviolet light, and orange is near-ultraviolet light. Image: NASA, JPL-Caltech 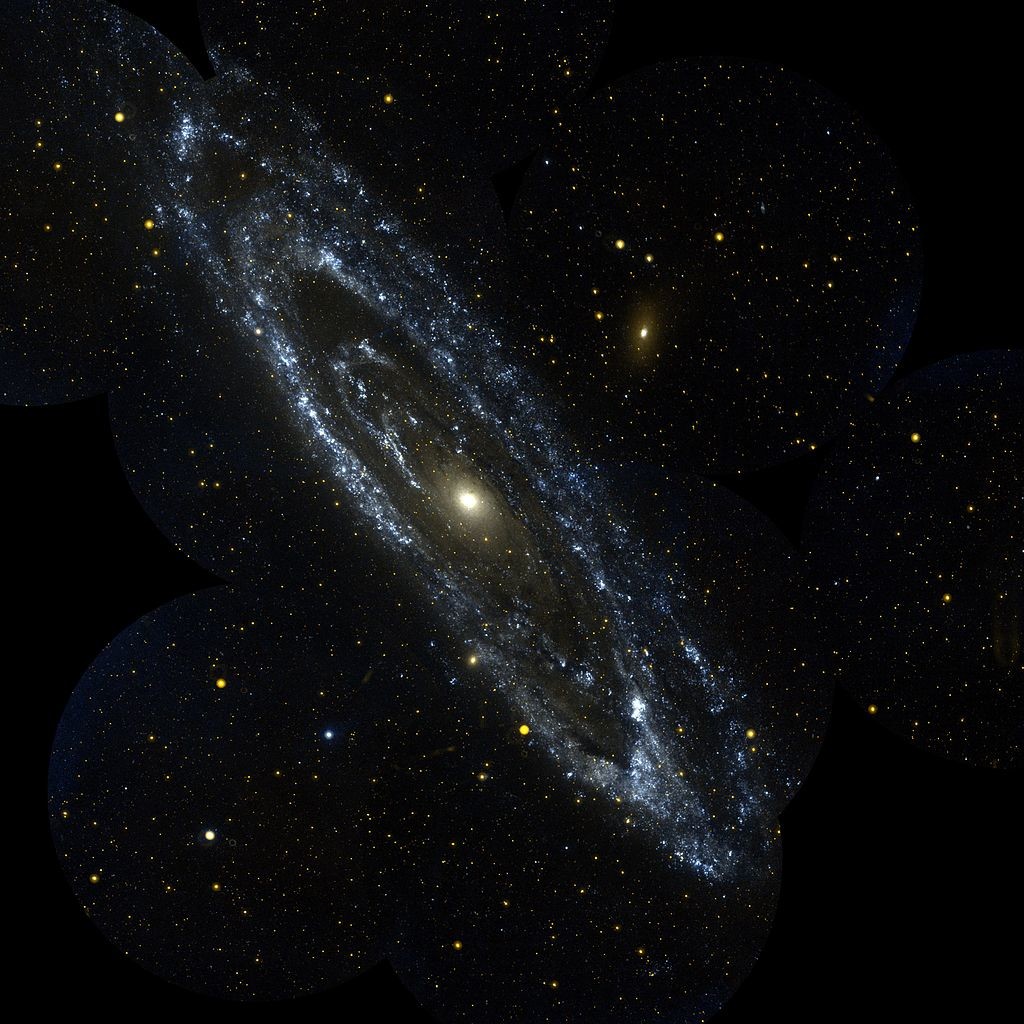 This image is in ultraviolet waves! This image is a Galaxy Evolution Explorer observation of the large galaxy in Andromeda, Messier 31. The Andromeda galaxy is the second massive in the local group of galaxies that includes our Milky Way. Andromeda is the nearest large galaxy to our own. The image is a mosaic of 10 separate Galaxy Evolution Explorer images taken in September, 2003. The color image (with near ultraviolet shown by red and far ultraviolet shown by blue) shows blue regions of young, hot, high mass stars tracing out the spiral arms where star formation is occurring, and the central orange-white “bulge” of old, cooler stars formed long ago. The star forming arms of Messier 31 are unusual in being quite circular rather than the usual spiral shape. Several companion galaxies can also be seen. These include Messier 32, a dwarf elliptical galaxy directly below the central bulge and just outside the spiral arms, and Messier 110 (M110), which is above and to the right of the center. M110 has an unusual far ultraviolet bright core in an otherwise “red”, old star halo. Many other regions of star formation can be seen far outside the main body of the galaxy. Image: NASA, JPL, California Institute of Technology 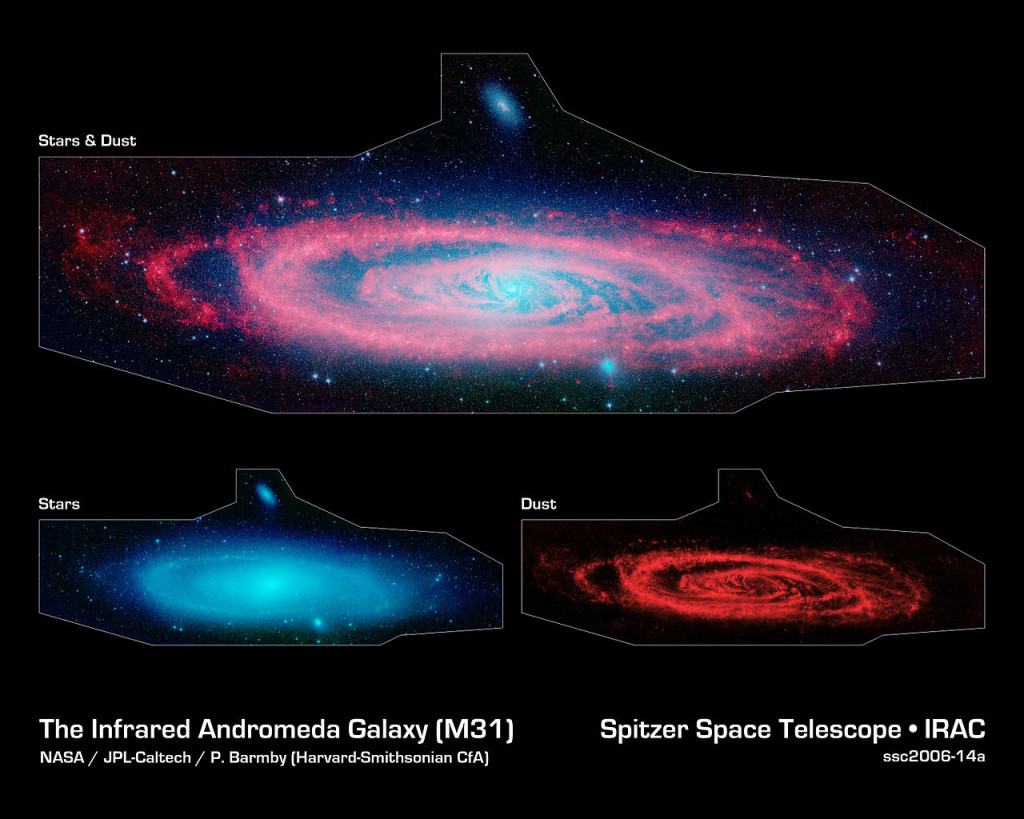 This infrared composite image from NASA’s Spitzer Space Telescope shows the Andromeda galaxy, a neighbor to our Milky Way galaxy. The main image (top) highlights the contrast between the galaxy’s choppy waves of dust (red) and smooth sea of older stars (blue). The panels below the main image show the galaxy’s older stars (left) and dust (right) separately. Spiral galaxies tend to form new stars in their dusty, clumpy arms, while their cores are populated by older stars. The Spitzer view also shows Andromeda’s dust lanes twisting all the way into the center of the galaxy, a region that is crammed full of stars. In visible-light pictures, this central region tends to be dominated by starlight. Astronomers used these new images to measure the total infrared brightness of Andromeda. Because the amount of infrared light given off by stars depends on their masses, the brightness measurements provided a novel method for “weighing” the Andromeda galaxy. According to this method, the mass of the stars in Andromeda is about 110 billion times that of the sun, which is in agreement with past calculations. This means the galaxy contains about one trillion stars (because most stars are actually less massive than the sun). For comparison, the Milky Way is estimated to hold about 400 billion stars. A small, companion galaxy called NGC 205 is visible above Andromeda. Another companion galaxy called M32 can also been seen below the galaxy. The Andromeda galaxy, also known as Messier 31, is located 2.5 million light-years away in the constellation Andromeda. It is the closest major galaxy to the Milky Way, making it the ideal specimen for carefully examining the nature of galaxies. On a clear, dark night, the galaxy can be spotted with the naked eye as a fuzzy blob. Andromeda’s entire disk spans about 260,000 light-years, which means that a light beam would take 260,000 years to travel from one end of the galaxy to the other. By comparison, the Milky Way is about 100,000 light-years across. When viewed from Earth, Andromeda occupies a portion of the sky equivalent to seven full moons. Because this galaxy is so large, the infrared images had to be stitched together out of about 3,000 separate Spitzer exposures. The light detected by Spitzer’s infrared array camera at 3.6 and 4.5 microns is sensitive mostly to starlight and is shown in blue and green, respectively. The 8-micron light shows warm dust and is shown in red. The contribution from starlight has been subtracted from the 8-micron image to better highlight the dust structures. Image: NASA, JPL-Caltech, P. Barmby (Harvard-Smithsonian CfA) 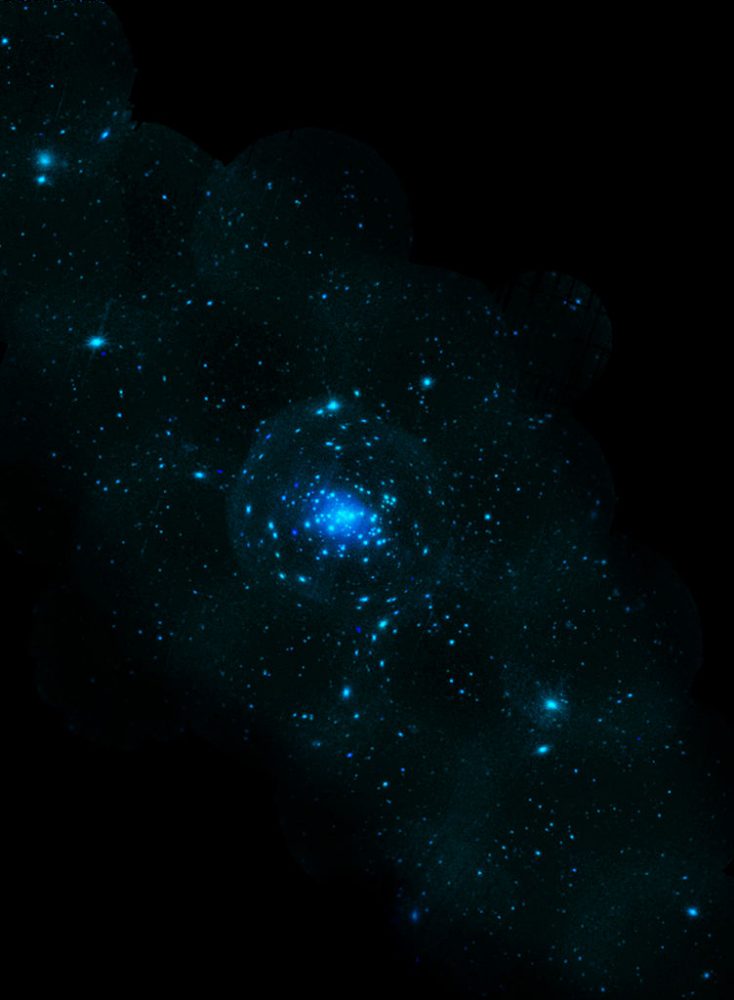 This image of the Andromeda spiral galaxy highlights explosive stars in its interior, and cooler, dusty stars forming in its many rings. The XMM-Newton telescope captured in X-rays. NASA plays a role in both of these European Space Agency-led missions. XMM-Newton is capturing what happens at the end of the lives of massive stars. It shows the high-energy X-rays that come from, among other objects, supernova explosions and massive dead stars rotating around companions. These X-ray sources are clustered in the center of the galaxy, where the most massive stars tend to form. Andromeda is our Milky Way galaxy’s nearest large neighbor. It is located about 2.5 million light-years away and holds up to an estimated trillion stars. Our Milky Way is thought to contain about 200 billion to 400 billion stars. Image: ESA, XMM-Newton, EPIC, W. Pietsch

The many “personalities” of our great galactic neighbor, the Andromeda galaxy, are exposed in this new composite image from NASA’s Galaxy Evolution Explorer and the Spitzer Space Telescope. The wide, ultraviolet eyes of Galaxy Evolution Explorer reveal Andromeda’s “fiery” nature — hotter regions brimming with young and old stars. In contrast, Spitzer’s super-sensitive infrared eyes show Andromeda’s relatively “cool” side, which includes embryonic stars hidden in their dusty cocoons.
Galaxy Evolution Explorer detected young, hot, high-mass stars, which are represented in blue, while populations of relatively older stars are shown as green dots. The bright yellow spot at the galaxy’s center depicts a particularly dense population of old stars. Swaths of red in the galaxy’s disk indicate areas where Spitzer found cool, dusty regions where stars are forming. These stars are still shrouded by the cosmic clouds of dust and gas that collapsed to form them.Together, Galaxy Evolution Explorer and Spitzer complete the picture of Andromeda’s swirling spiral arms. Hints of pinkish purple depict regions where the galaxy’s populations of hot, high-mass stars and cooler, dust-enshrouded stars co-exist. Located 2.5 million light-years away, the Andromeda is our largest nearby galactic neighbor. The galaxy’s entire disk spans about 260,000 light-years, which means that a light beam would take 260,000 years to travel from one end of the galaxy to the other. By comparison, our Milky Way galaxy’s disk is about 100,000 light-years across. This image is a false color composite comprised of data from Galaxy Evolution Explorer’s far-ultraviolet detector (blue), near-ultraviolet detector (green), and Spitzer’s multiband imaging photometer at 24 microns (red). Image: NASA, JPL-Caltech/K. Gordon (Univ. of Arizona) & GALEX Science Team

NASA Tour of the Andromeda Galaxy