The Summer Triangle is one of the most familiar patterns in the northern summer night sky.

The three bright stars that mark the vertices of the Summer Triangle are Altair, Deneb, and Vega, the brightest stars in the constellations Aquila, Cygnus, and Lyra. The star pattern makes it easy to locate each of the three constellations.

The Summer Triangle is as noticeable in the summer sky as Orion constellation is in the winter. In fact, the asterism is so prominent in the sky that it was once used for navigation.

It was referred to as the Navigator’s Triangle by U.S. military navigators before GPS systems and other navigational equipment took over. 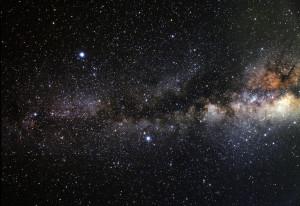 A wide field image of the region of sky in which HD 189733b is located – In this image we can see the asterism of the “Summer Triangle” a giant triangle in the sky composed of the three bright stars Vega (top left), Altair (lower middle) and Deneb (far left). HD 189733b is orbiting a star very close to the centre of the triangle. Image: NASA, ESA. Credit: A. Fujii

In northern latitudes, the three stars can easily be located in the evening sky in June and July. Vega, which lies at the apex of the Summer Triangle, can be found in the east. It is the brightest star in the eastern sky and very easy to find. All three stars are bright enough to be visible even from light-polluted urban areas. In the summer months, Deneb lies to the lower left or east of Vega and Altair to the lower right in the south at dusk.

The name of the asterism became widely used in the 1950s, with the British astronomer Sir Patrick Moore and American author H.A. Rey responsible for popularising the term. The Summer Triangle can be found in astronomy guidebooks dating back to 1913. 19th century astronomers Bode and J.J. Littrow noted the asterism, but did not give it a label.

The constellations Aquila and Cygnus are linked by a Greek myth. When Zeus fell in love with the goddess Nemesis, she did not return his affection. Zeus then decided to turn himself into a swan and he persuaded Aphrodite to take the shape of an eagle and pretend to pursue him. Nemesis saw the swan being pursued and gave it refuge. Zeus is said to have placed the constellations Swan (Cygnus) and Eagle (Aquila) into the sky to commemorate the success of his conquest.

The stars that form the Summer Triangle are among the brightest stars in the night sky. Vega, Alpha Lyrae, is the brightest of the three. Deneb, Alpha Cygni, is the dimmest, yet most luminous and by far the most distant. Altair, Alpha Aquilae, is the nearest of the three to Earth, only 16.7 light years away. Vega is not much farther away, at a distance of 25 light years.

Deneb, on the other hand, is located at a distance of 3,550 light years from the solar system. It is the most distant first magnitude star, and its brightness is greatly diminished by the distance. All three vertices of the Summer Triangle are bluish-white stars, belonging to the spectral class A.

Vega is located at the north-west corner of the Summer Triangle, Deneb marks the north-east corner, and Altair sits in the southern corner.

There are several notable deep sky objects located within the boundaries of the asterism. Among them, the Ring Nebula (Messier 57) lies to the south-east of Vega and the Dumbbell Nebula (Messier 27) can be found in Vulpecula constellation, halfway between Deneb and Sadr, the star that marks the centre of the Northern Cross in Cygnus constellation.

Vega is the brightest star in Lyra constellation and the fifth brightest star in the night sky. It has the Bayer designation Alpha Lyrae. The stars visible to the south of Vega reminded observers in ancient times of the lyre, the string instrument, which is how Lyra constellation got its name. Several stars in Vega’s vicinity are binary stars and can be seen in binoculars. 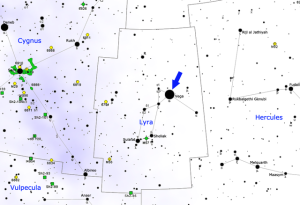 Vega has the stellar classification A0 V. It is a blue-white main sequence star with an apparent magnitude of 0.03, only 25 light years distant from Earth. It has 2.1 times the Sun’s mass and 2.4 times the solar radius. It is about 40 times more luminous than the Sun.

Altair, Alpha Aquilae, is the brightest star in the constellation Aquila, the Eagle. The star marks the eagle’s head. Altair belongs to the spectral class A7 V, which means that it is a blue-white main sequence star. It has a visual magnitude of 0.77 and is 16.73 light years distant from the solar system. It is classified as a Delta Scuti type variable. The star has 1.79 solar masses and is 10.6 times more luminous than the Sun.

Altair is the 12th brightest star in the sky. It is a fast spinner, rotating at a speed of 286 km/s with a period of about 9 hours. As a result, it has a flattened shape. Along with the stars Alshain (Beta Aquilae) and Tarazed (Gamma Aquilae), Altair forms the Shaft of Aquila, a line of stars sometimes also known as the Family of Aquila.

Deneb can be found at the end of the line of bright stars located to the south of Vega. It is, however, easier to find by looking for a big cross in the northern sky, a pattern slightly resembling a kite. Deneb is the brightest star of the Northern Cross, the most prominent star pattern in Cygnus constellation and one of the most easily recognised asterisms in northern latitudes, next to the Big Dipper, Little Dipper, and Cassiopeia‘s ‘W.’ The Northern Cross is significantly larger than its southern counterpart, the Southern Cross, located in the constellation Crux. 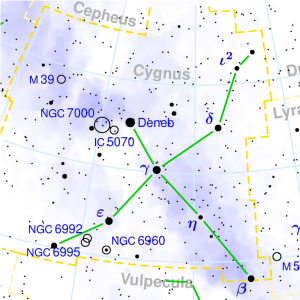 Deneb has the Bayer designation Alpha Cygni. It is a blue-white supergiant star with the stellar classification A2 Ia. It has an apparent magnitude of 1.25, which makes it the 19th brightest star in the sky, and it lies at a distance of 3,550 light years distant from Earth. The star is 19 times more massive than the Sun, has 203 times the Sun’s radius, and is 196,000 times more luminous.

Deneb marks the Swan’s tail, while the bright Albireo, Beta Cygni, marks the bird’s head. Vega appears three times as bright as Deneb because it is closer to us, but Deneb is by far the most luminous of the three stars, and one of the greatest supergiant stars known.