Cygnus X-1 is a galactic X-ray source located in the northern constellation Cygnus. The X-ray source is believed to be a stellar mass black hole, one created from the collapse of a massive star about 5 to 6 million years ago. It is one of the strongest sources of X-ray emissions discovered and was the first X-ray source that was widely accepted to be a black hole candidate.

Cygnus X-1 belongs to a massive X-ray binary system approximately 6,070 light years from Earth. Discovered in 1964, it is one of the most studied objects in its class. It is also one of the strongest persistent X-ray sources known.

Cygnus X-1 has a mass 14.8 times that of the Sun and its compact size indicates that it can’t be a regular star or any object other than a black hole. 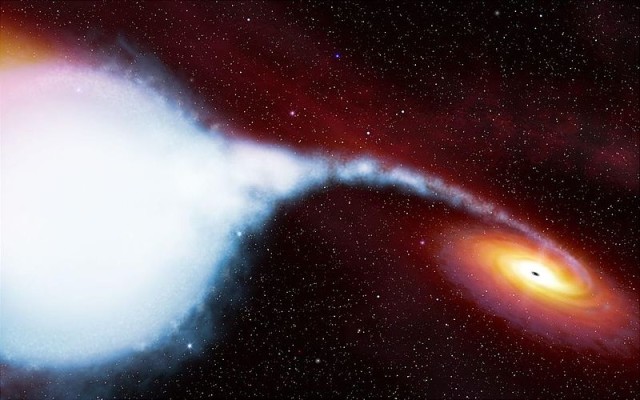 The physicists Stephen Hawking and Kip Thorne had a friendly wager about Cygnus X-1 in 1974, with Hawking betting that the object was not a black hole. In 1990, he conceded the bet after additional observational data had strengthened the theory that there really was a black hole in the system.

Today, the theory is widely accepted even though without direct observation it can’t be confirmed.

The X-ray binary system consists of the compact object Cygnus X-1 and a blue supergiant designated HDE 226868, which Cygnus X-1 orbits at about 0.2 astronomical units – about 20 percent of the distance from the Earth to the Sun – with an orbital period of 5.599829 days. Cygnus X-1 and the supergiant star do not eclipse; Cygnus X-1 never goes behind the star. The mass of the black hole is estimated to be around 14.8 solar masses, while the supergiant is believed to have 19.2 solar masses.

The accretion disk around the X-ray source draws material from the supergiant star’s stellar wind and heats it to millions of degrees. As a result, X-ray emissions are generated from the source and a pair of jets are taking some of the energy generated by the material away into space. 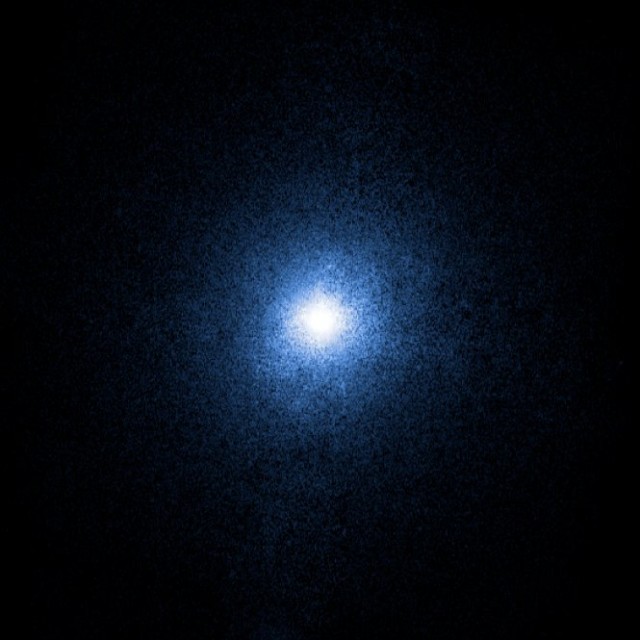 The Cygnus X-1/HDE 226868 pair possibly belongs to the Cygnus OB3 stellar association, as it shares a common motion through space with stars belonging to the association. If the binary system is indeed a member, the estimated age of Cygnus X-1 and HDE 226868 would be around five million years, and the progenitor star that collapsed into a black hole would have been over 40 times more massive than the Sun as the largest member of the Cygnus OB3 association has 40 solar masses. The progenitor star is believed to have lost more than 30 solar masses of material, some of it possibly to the supergiant star because the helium enrichment in the star’s outer atmosphere may indicate that there was a mass transfer between the two.

The surface of the supergiant is tidally distorted by the gravity of Cygnus X-1, resulting in the star having a shape similar to a teardrop, further distorted by rotation. In profile, HDE 226868 would look like an egg, with the small end pointed toward the black hole. As a result of star not being spherical, the visual magnitude of HDE 226868 varies by 0.06 magnitudes during each orbit. It is at its dimmest when the binary system is aligned with the line of sight, and classified as an ellipsoidal variable.

Without the gas and dust between the star and our solar system, HDE 226868 would be a fifth magnitude star, visible without binoculars.

Cygnus X-1 was discovered by X-ray instruments that were carried by a sounding rocket launched in New Mexico, from White Sands Missile Range. A survey was conducted in 1964 to map the X-ray sources using two Aerobee suborbital rockets that carried Geiger counters to measure the emissions. Cygnus X-1 was one of the eight X-ray sources discovered during the survey.

Evidence for the existence of black holes – both stellar mass black holes like Cygnus X-1 and supermassive black holes like Sagittarius A*, which are about a million times heavier and found at the centres of galaxies – has been found in the last 50 years or so, but at the time Cygnus X-1 was discovered, they were still considered hypothetical objects. Black holes can’t be observed directly, which means that proving their existence is difficult. The strongest evidence comes from binary systems like Cygnus X-1/HD 226868 or V404 Cygni, in which a star that can be observed is seen orbiting a massive but invisible companion.

In 1970, NASA launched the Uhuru satellite, which detected 300 new X-ray sources and revealed new information about Cygnus X-1. The Uhuru observations showed fluctuations in intensity of the X-ray emissions occurring several times a second. This meant that the energy was generated over a region of approximately 105 kilometres, which was relatively small.

The X-ray source was pinpointed to the star HDE 226868 in April and May 1971, when astronomers at Leiden Observatory and the National Radio Astronomy Observatory made independent observations of the system. The star, a supergiant, is located about half a degree from Eta Cygni. As the star is not capable of emitting such quantities of X-rays, scientists theorized that it had to have a companion that was capable of heating gas to the extreme temperatures needed to generate the emissions. 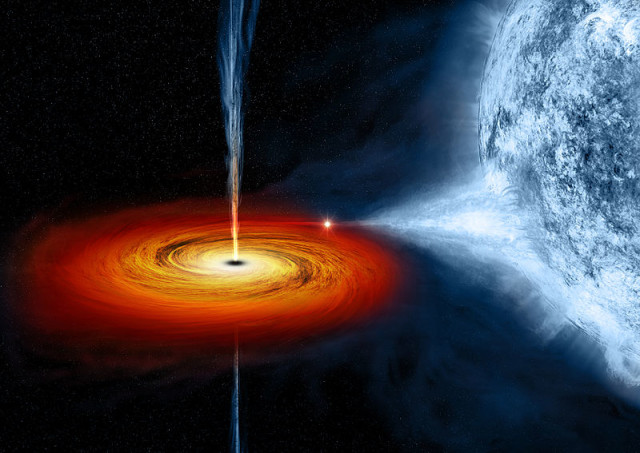 A massive hidden companion to the supergiant was discovered the same year by astronomers at the Royal Greenwich Observatory and the David Dunlap Observatory at the University of Toronto. The companion was detected by measuring the Doppler shift of the supergiant star’s spectrum. As the companion’s mass, estimated from orbital parameters, was extremely high, the object was taken to be a black hole, because the alternative – a neutron star – could not have a mass more than three times that of the Sun, which the companion did. (The consensus on neutron stars is that they can’t have more than three solar masses.) Additionally, neutron stars typically exhibit pulsations with a stable period, and these have never been detected from Cygnus X-1. Also, measurements of the motion of Cygnus X-1 through space revealed that it was moving quite slowly with respect to the Milky Way, suggesting that it was not created in a supernova explosion: it did not get that much of a kick when it was born. If it had, it would travel faster through the Milky Way. The progenitor star remained in orbit, which suggests that it did not explode as a supernova because it would have likely been ejected from the star system at a high speed. As it stayed in orbit, this indicates that it may have collapsed directly into a black hole or only had a modest explosion. After further observations strenghtened the black hole theory, Cygnus X-1 was widely accepted to be one by the end of 1973.

In 1992, the High Speed Photometer on the Hubble Space Telescope may have detected evidence of an event horizon around Cygnus X-1, when it recorded two final bursts of energy from material passing through what is presumably the event horizon.

In 2006, Cygnus X-1 became the first candidate for a stellar mass black hole to show evidence of gamma ray emission in the high energy band.

Cygnus X-1 lies near the bright star Eta Cygni, which can be found by first locating either the Summer Triangle or the Northern Cross, two familiar asterisms in the summer sky. To find out how to pinpoint the location of the binary system, watch the video.

Chandra: A Tour of Cygnus X-1