April is the best time of year to see a number of famous galaxies, nebulae and star clusters located in these constellations. Some of the best known deep sky objects visible in April include the Cigar Galaxy (M82), the Pinwheel Galaxy (M101), the Owl Nebula (M97), the Leo Triplet of galaxies (M65, M66 and NGC 3628) and the Southern Pinwheel Galaxy (M83).

Ursa Major is the largest northern constellation and third largest overall, after Hydra and Virgo. It stretches across an area of 1280 square degrees and it is circumpolar to northern observers, which means that it stays visible throughout the year. Observers living south of latitude 30°S cannot see it.

Easily recognizable for the Big Dipper asterism, the constellation hosts a number of interesting stars and famous deep sky objects. Six of the seven bright stars that form the Big Dipper are of the second magnitude or brighter. The brightest ones – Alioth (Epsilon Ursae Majoris, mag. 1.77), Dubhe (Alpha UMa, mag. 1.79) and Alkaid (Eta UMa, mag. 1.86) – are the 32nd, 34th and 40th brightest star in the sky respectively.

Following the imaginary line formed by the stars of the Dipper’s handle leads to the bright Arcturus in the constellation Boötes and then to Spica in Virgo, while Dubhe and Merak, the stars at the opposite end of the asterism, point the way to Polaris, the North Star, in Ursa Minor.

Bode’s Galaxy and the Cigar Galaxy are located northwest of Dubhe. They can be found by extending the imaginary line from Phecda to Dubhe by approximately the same distance. Both galaxies are quite bright. Bode’s Galaxy is a grand design spiral galaxy with an apparent magnitude of 6.94, while the Cigar Galaxy, situated just to the north of M81 and seen edge-on, is the nearest starburst galaxy to Earth. It has a visual magnitude of 8.41. Both galaxies can be seen in larger binoculars and small telescopes. 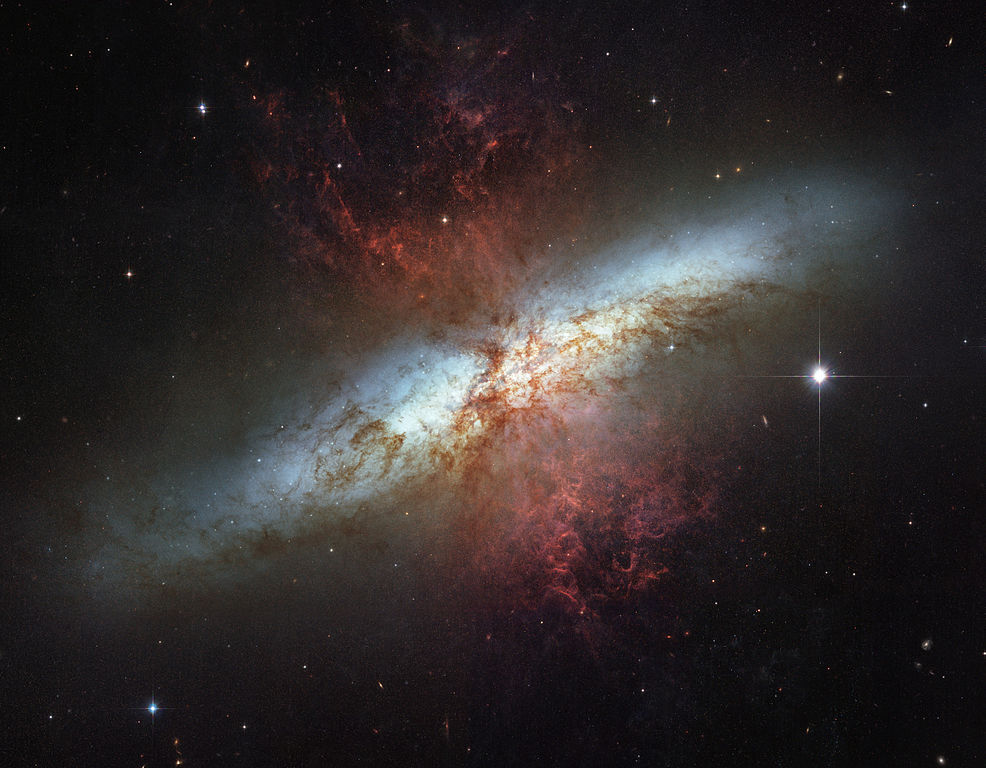 Cigar Galaxy – Messier 82 (NGC 3034), photo: NASA, ESA, and The Hubble Heritage Team (STScI, AURA) – The galaxy is remarkable for its bright blue disk, webs of shredded clouds, and fiery-looking plumes of glowing hydrogen blasting out of its central regions. Throughout the galaxy’s center, young stars are being born 10 times faster than they are inside our entire Milky Way Galaxy. The resulting huge concentration of young stars carved into the gas and dust at the galaxy’s center. The fierce galactic superwind generated from these stars compresses enough gas to make millions of more stars. In M82, young stars are crammed into tiny but massive star clusters. These, in turn, congregate by the dozens to make the bright patches, or “starburst clumps,” in the central parts of M82. The clusters in the clumps can only be distinguished in the sharp Hubble images. Most of the pale, white objects sprinkled around the body of M82 that look like fuzzy stars are actually individual star clusters about 20 light-years across and contain up to a million stars. The rapid rate of star formation in this galaxy eventually will be self-limiting. When star formation becomes too vigorous, it will consume or destroy the material needed to make more stars. The starburst then will subside, probably in a few tens of millions of years. Photo:

The Owl Nebula is a magnitude 9.9 planetary nebula that resembles the eyes of an owl in larger telescopes. It can be seen just under bottom of the Big Dipper’s bowl, 2.5 degrees southeast of Merak in the direction of Phecda.

The Pinwheel Galaxy is a face-on spiral galaxy with a visual magnitude of 7.86. It sits just above the handle of the Big Dipper, forming a triangle with Alkaid and the Mizar/Alcor pair. 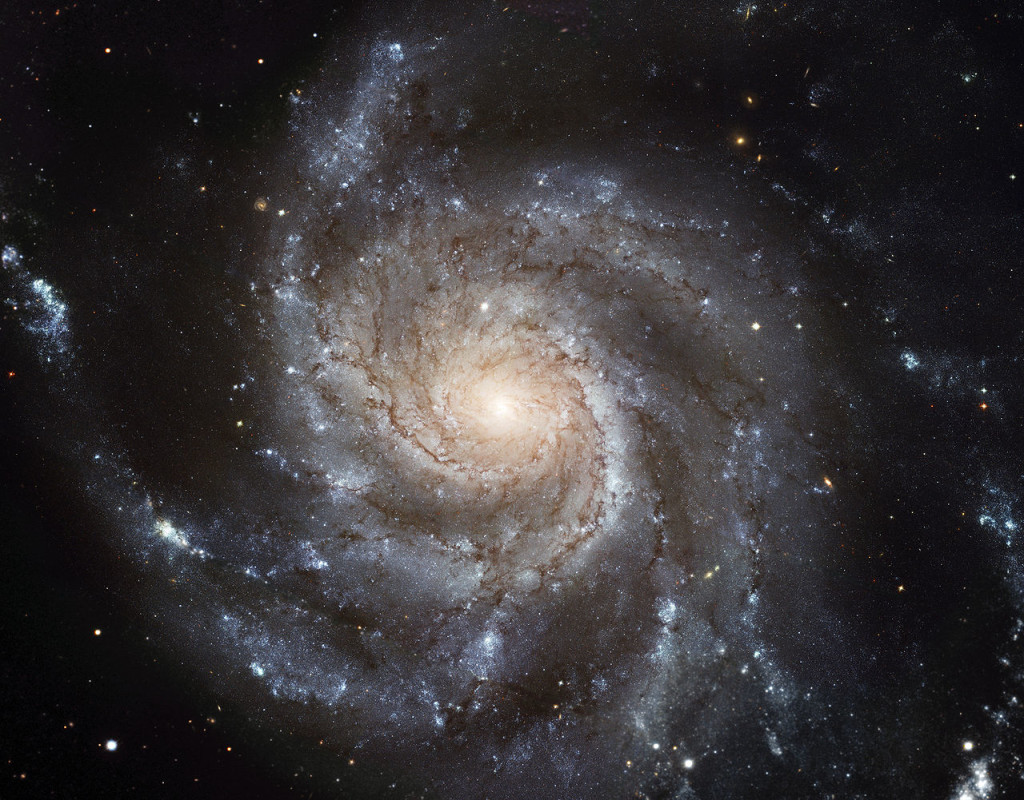 Other notable deep sky objects in Ursa Major include the barred lenticular galaxy NGC 2787, the starburst spiral galaxies NGC 3079 and NGC 3310, the peculiar dwarf galaxy NGC 5474, and the dwarf irregular galaxy I Zwicky 18, one of the youngest known galaxies.

Ursa Major’s zodiac neighbour Leo is slightly smaller, but just as rich in deep sky objects. Occupying an area of 947 square degrees, Leo is the 12th largest constellation in the sky and its brightest star, Regulus, is the 21st brightest star.

Leo is easily identified because the six bright stars that mark the lion’s head form a prominent spring asterism known as the Sickle. The Sickle, which resembles a backwards question mark, ends with Regulus, the star that marks the lion’s heart. The constellation’s second brightest star, Denebola, which marks the lion’s tail, is located at the opposite end to Regulus and the Sickle. Denebola and the star Vindemiatrix in the neighbouring Virgo constellation are used to locate the centre of the Virgo Cluster, the closest large galaxy cluster to the Milky Way. 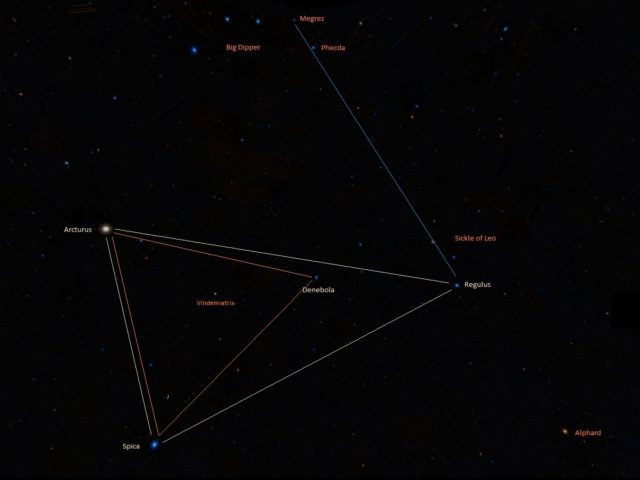 Denebola is easy to find as it forms an equilateral triangle with the bright stars Arcturus and Spica, known as the Spring Triangle. The asterism is sometimes taken to be the less equilateral triangle formed by Arcturus, Spica and Regulus. Denebola is also part of the Great Diamond of Virgo, another prominent spring asterism, which it forms with Arcturus, Spica and Cor Caroli, the brightest star in Canes Venatici constellation.

Leo hosts a number of notable deep sky objects. These include the Leo Triplet (the M66 Group), a group of galaxies that consists of the bright spiral galaxies Messier 65, Messier 66 and NGC 3628, and the Leo I Group (M96 Group), a group of between 8 and 24 galaxies that includes three bright Messier galaxies: the spirals Messier 95 and Messier 96 and the elliptical galaxy Messier 105. 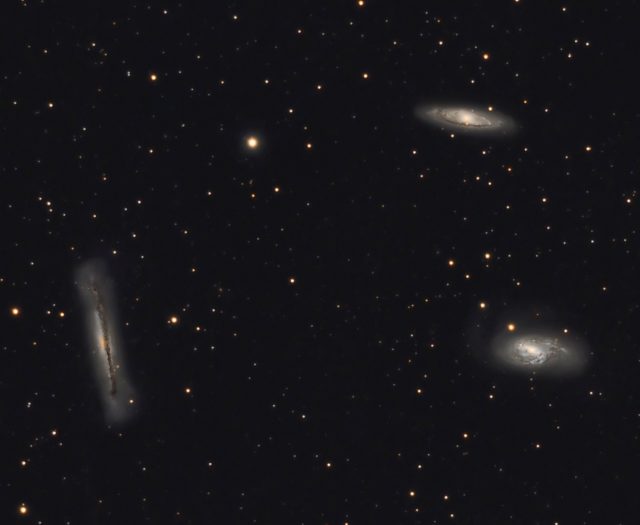 Leo Minor, the smaller lion, is as the name suggests one of the smaller constellations. Occupying an area of 232 square degrees, it is the 64th constellation in size. It was created in the late 17th century from the stars between the considerably larger Ursa Major and Leo constellations.

Leo Minor does not have any bright stars, but it contains several interesting deep sky objects. One of these is quite unique. Nicknamed the Green Blob, Hanny’s Voorwerp is a quasar ionization echo, an ionized cloud the size of a small galaxy, illuminated by the radiation from the giant black hole at the heart of the spiral galaxy IC 2497. The black hole is believed to be a former quasar. The origin of Hanny’s Voorwerp is still uncertain. The object lies at an approximate distance of 650 million light years from Earth.

Representing the mythical Lernaean Hydra, the southern constellation Hydra is the largest and longest of all the 88 constellations. Occupying 1303 square degrees, the constellation has been known since ancient times. It is, however, far from being one of the most prominent constellations in the sky. It only has two stars brighter than magnitude 3.0 and its brightest star, the orange giant Alphard, is only moderately bright at magnitude 2.0.

Hydra contains a number of interesting deep sky objects. These include three Messier objects: the Southern Pinwheel Galaxy (M83), a bright, face-on spiral galaxy, the globular cluster Messier 68 and the open cluster Messier 48. Other notable objects in the constellation include the Ghost of Jupiter nebula (NGC 3242), a planetary nebula sometimes also known as the Eye Nebula, Tombaugh’s Globular Cluster (NGC 5694) and the overlapping but physically unrelated pair of galaxies catalogued as NGC 3314. NGC 3314 belongs to the Hydra Cluster, a group of 157 relatively bright galaxies whose largest members are the elliptical galaxies NGC 3309 and NGC 3311 and the large spiral galaxy NGC 3312.

This new Hubble image shows the scatterings of bright stars and thick dust that make up spiral galaxy Messier 83, otherwise known as the Southern Pinwheel Galaxy. One of the largest and closest barred spirals to us, this galaxy is dramatic and mysterious; it has hosted a large number of supernova explosions, and appears to have a double nucleus lurking at its core. Image: NASA, ESA, and the Hubble Heritage Team (STScI/AURA) Acknowledgement: William Blair (Johns Hopkins University)

Sextans is a faint constellation located in the inconspicuous region of the sky between Hydra, Leo and Crater. It only has one star brighter than fifth magnitude: with a visual magnitude of 4.49, Alpha Sextantis is just visible to the naked eye in good conditions.

Notable deep sky objects in Sextans include the bright dwarf irregular galaxy Sextans B, a member of the Local Group, the considerably fainter Sextans A, a small dwarf irregular galaxy that lies in the outskirts of the Local Group, the interacting pair of spiral galaxies catalogued as NGC 3169 and NGC 3166, and the Spindle Galaxy (NGC 3115), a field lenticular galaxy seen edge-on (not to be confused with the other Spindle Galaxy, NGC 5866, located in the constellation Draco and believed to be the object Charles Messier catalogued as Messer 102). 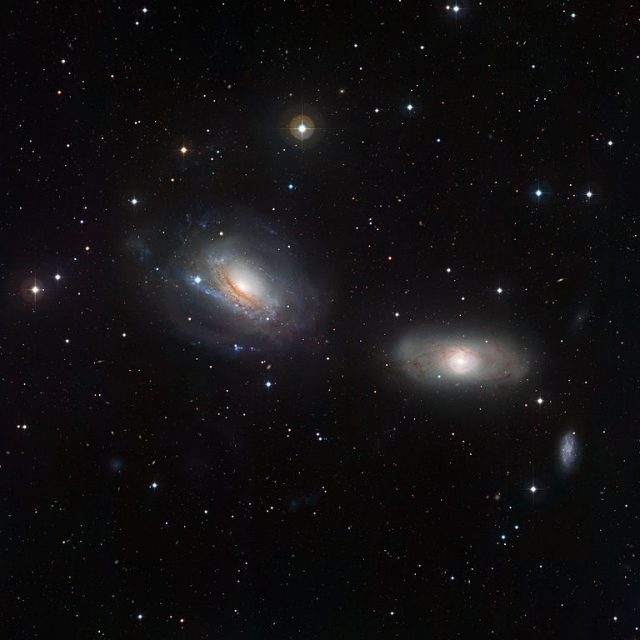 This image from the Wide Field Imager on the MPG/ESO 2.2-metre telescope at the La Silla Observatory in Chile captures the pair of galaxies NGC 3169 (left) and NGC 3166 (right). These adjacent galaxies display some curious features, demonstrating that each member of the duo is close enough to feel the distorting gravitational influence of the other. The gravitational tug of war has warped the spiral shape of one galaxy, NGC 3169, and fragmented the dust lanes in its companion NGC 3166. Image: ESO/Igor Chekalin

The brightest stars in Crater, Delta Crateris (mag. 3.56) and Alpha Crateris (mag. 4.07), are easier to see than those in Sextans, but don’t make the constellation particularly prominent. Crater does not have many notable deep sky objects either. Crater 2, the fourth largest dwarf galaxy orbiting the Milky Way, and the spiral galaxies NGC 3511, NGC 3513 ad NGC 3981 are among the brightest.

Representing the air pump, the constellation Antlia is also relatively small and faint. It does, however, contain several interesting deep sky objects. These include the face-on unbarred spiral galaxy NGC 2997, the dwarf spheroidal galaxy known as the Antlia Dwarf, the Milky Way satellite Antlia 2, discovered in 2018, and the giant elliptical galaxies NGC 3268 and NGC 3258, members of the Antlia Cluster, the third closest cluster of galaxies to the Local Group.

Chamaeleon is one of the smallest constellations, with an area of only 132 square degrees. It is completely invisible to northern observers. None of the four bright stars that form the constellation’s diamond shape are brighter than magnitude 4.00.

Chamaeleon is home to several interesting deep sky objects. These include the Eta Chamaeleontis Cluster (Mamajek 1), a young open cluster, the planetary nebula NGC 3195, and the Chamaeleon cloud complex, a vast star forming region that stretches across almost the entire constellation and overlaps into the neighbouring Apus, Musca, Octans and Carina.

The table below shows the latitudes between which the April constellations are visible.