The Owl Nebula, also known as Messier 97 (M97), is a planetary nebula located in Ursa Major. The nebula lies at an approximate distance of 2,030 light years from Earth. It is known for its distinctive shape, resembling a pair of owl-like eyes, that can be seen in larger telescopes.

The estimated age of the Owl Nebula is about 8,000 years. The nebula has the designation NGC 3587 in the New General Catalogue.

The Owl Nebula was formed when a central star expelled its outer gaseous layers about 8,000 years ago. As the outer layers were gradually blown off over thousands of years, what was left of the original star contracted to form a hot white dwarf. 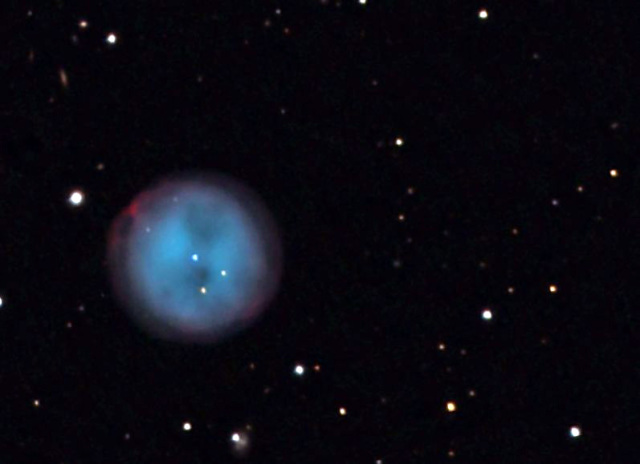 Most stars that expel material to form planetary nebulae – about 80 percent of them – expel a large amount of it in two opposing directions. The jets blown off by the progenitor star of the Owl Nebula are almost aligned with our line of sight. The dust within the jets blocks enough light from the expanding nebula to create the appearance of owl-like eyes.

One of the nebula’s eyes appears darker than the other. This is the jet that is emitted in our direction, while the fainter eye marks the jet expelled in the opposite direction, away from us.

The nebula will gradually disperse over the next several thousand years, while the central white dwarf will cool and fade away. In about 5 billion years, our Sun will end its life in similar fashion.

The Owl Nebula is one of the faintest Messier objects. It is quite large and has a relatively low surface brightness, but it can be seen in amateur telescopes in good conditions, with clear skies and no light pollution. It can even be spotted with larger binoculars. However, to see why the nebula was named the Owl, one needs a larger instrument, starting from an 8-inch telescope and moderately high power. The 14th magnitude central star can be seen in 10-inch or larger telescopes.

M97 is considerably brighter visually than photographically because most of its light is emitted in one green spectral line.

The nebula can be found just below the bowl of the Big Dipper. It lies about 2.3 degrees to the east-southeast of the star Merak, Beta Ursae Majoris, just south of the line from Merak to Phecda, Gamma Ursae Majoris, the other star marking the bottom of the Dipper’s bowl. The barred spiral galaxy Messier 108 lies in the vicinity and can be seen at about a third of the distance between M97 and Merak.

The Owl Nebula was discovered by the French astronomer Pierre Méchain, Charles Messier’s friend and colleague, on February 16, 1781. Messier included the object in his catalogue On March 24, 1781. 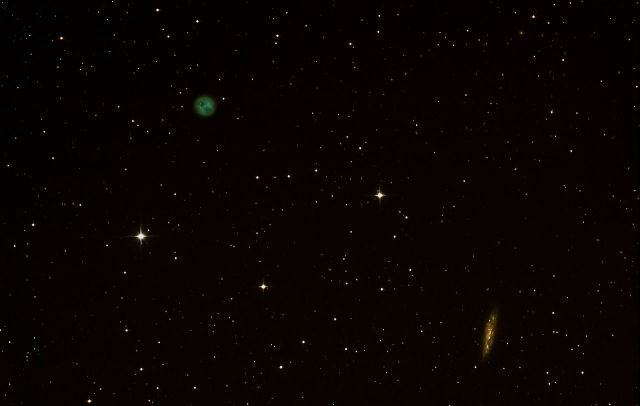 Upon discovery, Méchain reported that the nebula was a difficult object to see. Messier noted, “Nebula in the great Bear, near Beta: It is difficult to see, reports M. Méchain, especially when one illuminates the micrometer wires: its light is faint, without a star. M. Méchain saw it the first time on Feb 16, 1781, & the position is that given by him. Near this nebula he has seen another one [M108], which has not yet been determined, and also a third [M109] which is near Gamma of the Great Bear.”

The two “nebulae” Messier mentioned in his description of M97 were later named Messier 108 and Messier 109 by the American astronomer Owen Gingerich and added to Messier’s catalogue in 1960. They are in fact barred spiral galaxies.

There are two remote galaxies lying in the same line of sight as the Owl Nebula. The galaxies have the designations PGC 34279 and PGC 2490640.

Admiral William H. Smyth was the first to classify the object as a planetary nebula in 1844. 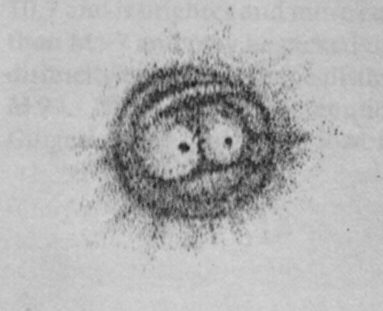 Drawing of the Owl Nebula (M97) by Lord Rosse.

M97 became known as the Owl Nebula after William Parsons, 3rd Earl of Rosse drew an illustration of the object after observing it with his home-made 72-inch reflector, known as the Leviathan of Parsonstown, in Ireland in 1848. Lord Rosse’s sketch of the nebula resembled an owl’s head. He described the object as “Two stars considerably apart in the central region, dark penumbra round each spiral arrangement, with stars as apparent centres of attraction. Stars sparkling in it; resolvable.”

M97 has about 0.13 solar masses and stretches across 0.91 light years in radius. It is expanding at an approximate speed of 27 to 39 km/s into the surrounding space.

There is a strikingly similar planetary nebula designated PLN 283+25.1 located in Hydra constellation. The resemblance to M97 has earned it the nickname the Southern Owl Nebula. 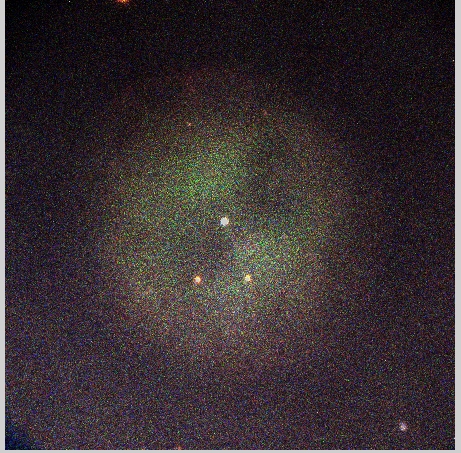