The Virgo Diamond is seen in the northern hemisphere in the evening during the months of spring. It covers a considerable area of the sky, slightly larger than the Big Dipper. Even though three of the four stars that form the asterism don’t belong to Virgo constellation, the stellar pattern is called the Great Diamond of Virgo because Spica, Virgo’s brightest star, forms the base of the diamond-shaped pattern. In addition to containing portions of Canes Venatici, Boötes, Virgo and Leo constellations, the asterism also almost completely encloses Coma Berenices. 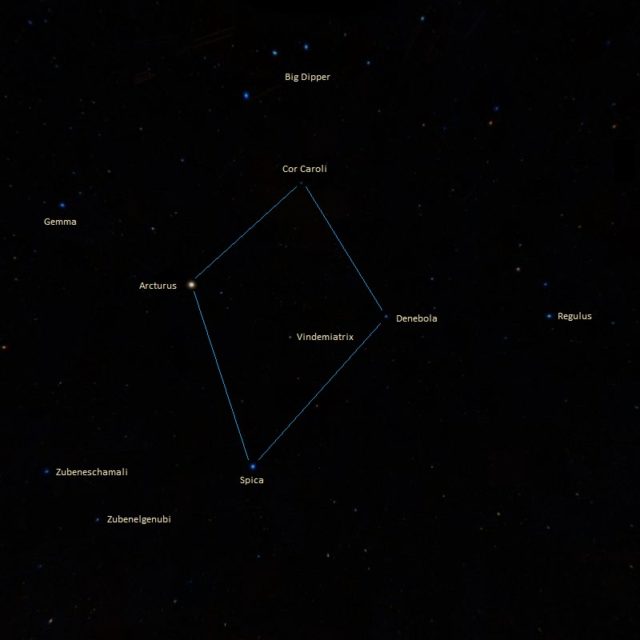 The triangle formed by Arcturus, Spica and Denebola is sometimes called the Spring Triangle, even though Regulus is usually taken as the third vertex of the asterism.

Arcturus, the brightest star in Boötes constellation and fourth brightest star in the sky, is an orange giant with a visual magnitude of -0.05. It lies at a distance of only 36.7 light years from Earth and is one of the most luminous nearby stars. It is 110 times more luminous than the Sun. The star is easy to find in the sky using the stars of the Big Dipper. The line formed by the three bright stars of the Dipper’s handle leads right to it.

Spica, the brightest star in Virgo and the 15th brightest star in the night sky, lies a little bit further along the same line. Located approximately 250 light years from us, the star is really a spectroscopic binary system classified as a rotating ellipsoidal variable. The two stars in the Spica system are very close together and, as a result, they are distorted by their mutual interaction and egg-shaped rather than spherical. The stars cannot be resolved and can only be separated by their spectrum. The primary component in the system is a B-type giant classified as a Beta Cephei type variable star. Spica has an apparent magnitude of 0.97. 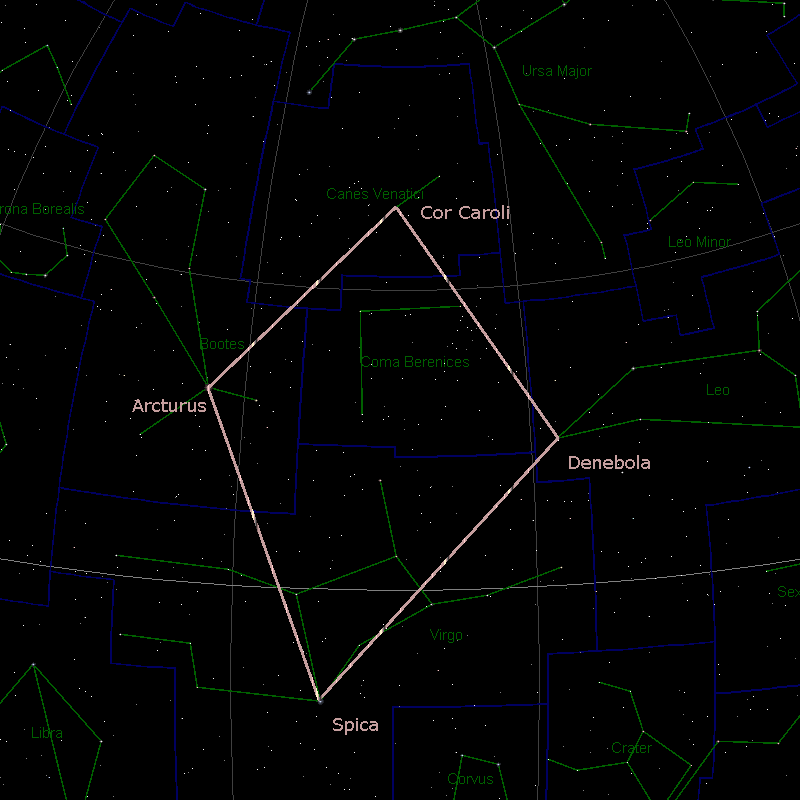 Denebola, Beta Leonis, is the third brightest star in Leo constellation. It lies at a distance of only 35.9 light years from Earth and has an apparent magnitude of 2.113. It is a white main sequence star with the spectral classification A3V. The star is a suspected Delta Scuti type variable, exhibiting variations in luminosity every few hours.

Denebola marks the tail of the celestial Lion. Its name is derived from the Arabic phrase Deneb Alased, which means “the lion’s tail.” The star is a rapid rotator, with a projected rotational velocity of 128 km/s. As a result, it has an oblate shape with a bulge along the equator.

Cor Caroli, the brightest star in Canes Venatici, marks the northern vertex of the Great Diamond. It is a binary system with a combined visual magnitude of 2.81 and the faintest of the four stars that form the asterism. The two components of the binary system are separated by 19.6 arc seconds and can easily be seen in small telescopes. Cor Caroli lies at an approximate distance of 110 light years from Earth and has the stellar classification A0. It is a variable star: its magnitude varies between 2.84 and 1.98 with a period of 5.47 days.

The star’s name means “Charles’ Heart,” referring to the King Charles I of England, who was beheaded in 1649. The star was named by King Charles II’s physician Sir Charles Scarborough to honour the late king in the 17th century. The original name, Cor Caroli Regis Martyris (“the heart of Charles, the martyred king”) first appeared on a star map in 1673.

The region of the sky framed by the Great Diamond contains many Messier galaxies and other deep sky objects that can be seen in small and medium-sized telescopes.

The Boötes Dwarf Galaxy, a faint dwarf spheroidal galaxy with a visual magnitude of 13.1, lies in the same region of the sky as Arcturus, in the direction of Spica.

The Whale Galaxy (NGC 4631) and the pair known as the Hockey Stick Galaxies or the Crowbar Galaxy (NGC 4656 and NGC 4657) in Canes Venatici can be seen just under Cor Caroli, in the direction of Denebola.

The famous Black Eye Galaxy (Messier 64) lies 19 degrees west and a little north of Arcturus, not far from M53. Its bright core can be seen in 4-inch and larger telescopes. The Needle Galaxy (NGC 4565), a famous edge-on spiral galaxy visible in small telescopes, is another object found in the upper corner of the Great Diamond, in Coma Berenices. 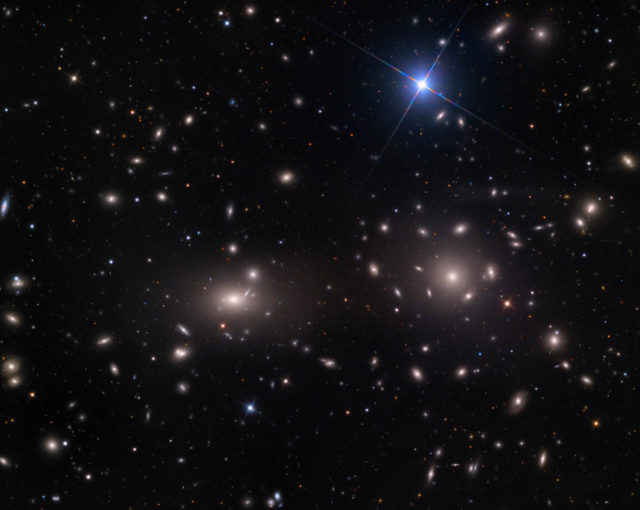 Elements of the Coma Cluster of galaxies – Three of the galaxies seen in this image are IC 4040 (left edge) NGC 4889 (center-left) NGC 4874 (center-right). The bright star in the upper right is HD 112887. Image: Adam Block/Mount Lemmon SkyCenter/University of Arizona

Coma Berenices is home to a number of other interesting objects, including the Coma Berenices Open Cluster (Melotte 111), a diffuse open cluster covering more than 5 degrees of the sky, and the Coma Cluster, a large cluster of galaxies approximately 321 million light years from Earth with two supergiant ellipticals at the core, NGC 4874 (Coma A) and NGC 4889 (Coma B).

Two galaxies belonging to the Virgo Cluster, Messier 85 and Messier 100, also lie in Coma Berenices, in the northern corner of the cluster, whose centre is located between Denebola and the star Vindemiatrix in Virgo. Other Messier galaxies that are members of the cluster include Messier 49, Messier 60, Messier 84, Messier 86 and Messier 87, also known as Virgo A. These galaxies are located in the constellation Virgo, near the border with Coma Berenices. 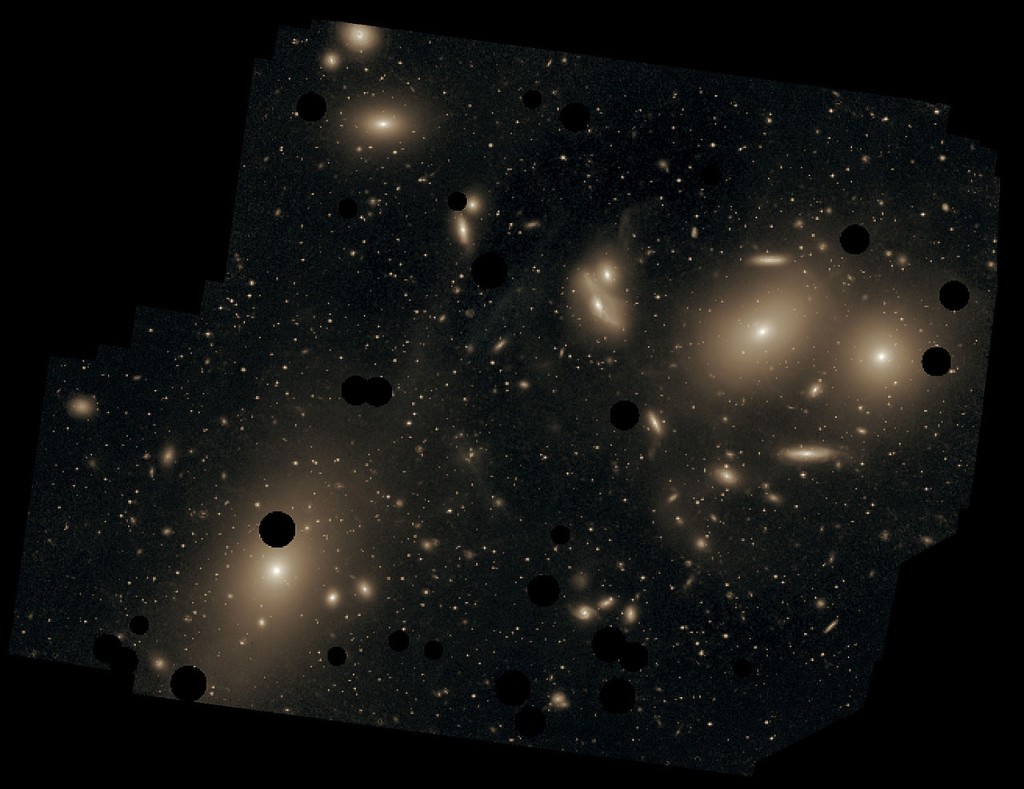