Canis Major is a constellation in the southern sky. Its name means “the greater dog” in Latin.

Canis Major is home to Sirius, the brightest star in the sky, as well as to several notable deep sky objects: the Canis Major Dwarf Galaxy, the open cluster Messier 41, the emission nebula NGC 2359 (also known as Thor’s Helmet), and the colliding spiral galaxies NGC 2207 and IC 2163.

Canis Major is the 43rd biggest constellation in the sky, occupying an area of 380 square degrees. It is located in the second quadrant of the southern hemisphere (SQ1) and can be seen at latitudes between +60° and -90°. The neighboring constellations are Columba, Lepus, Monoceros, and Puppis.

Canis Major belongs to the Orion family of constellations, along with Canis Minor, Lepus, Monoceros, and Orion.

Canis Major is commonly taken to represent the “greater dog” following the hunter Orion in Greek myth. The constellation is depicted as a dog standing on its hind legs, pursuing a hare, represented by the constellation Lepus.

Canis Major was described by Manilius as “the dog with the blazing face” because the dog appears to hold Sirius, the brightest star in the sky, in its jaws.

In mythology, Canis Major is associated with Laelaps, the fastest dog in the world, one destined to catch anything it pursued. Zeus gave Laelaps to Europa as a present, along with a javelin that could not miss. The gift proved to be an unfortunate one, as Europa herself was killed accidentally by her husband Cephalus, who was out hunting with the javelin.

Cephalus took the dog to Thebes in Boeotia (a Greek province north of Athens) to hunt down a fox that was causing some trouble there. Like Laelaps, the fox was extremely fast and was destined never to be caught. Once the dog found the fox and started chasing it, the race did not appear to have an end in sight. Zeus himself finally ended it and turned both animals to stone. He placed the dog in the night sky as the constellation Canis Major.

Sirius, also known as the Dog Star, is the brightest star in the sky and the fifth nearest star system to the Sun. Sirius is a binary star with an apparent magnitude of -1.42. It is only 8.6 light years distant.

The brighter component, Sirius A, is a white main sequence star and the companion, Sirius B, is a white dwarf that orbits the primary every 50 years. The distance between the two stars varies between 8.1 and 31.5 astronomical units. The companion is not visible to the naked eye.

Sirius A belongs to the spectral class A1V, and the dwarf to DA2. Sirius A has twice the mass of the Sun and is 25 more luminous. Sirius B is almost equal to the Sun in mass (0.98 solar masses) and is one of the most massive white dwarfs known.

The name Sirius comes from the Greek Σείριος (Seirios), which means “scorching,” “glowing” or “searing.” In ancient times, the star rose just before sunrise during the hottest summer period, the so-called Dog Days. Greeks and Romans believed the star was somehow responsible for the summer heat. 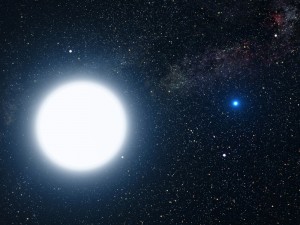 In Egypt, Sirius marked the flooding of the Nile. The star’s heliacal rising, just before the annual flooding and the summer solstice, played a crucial role in the Egyptian calendar during the Middle Kingdom era.

Along with the stars Rigel in Orion, Aldebaran in Taurus, Capella in Auriga, Pollux/Castor in Gemini, and Procyon in Canis Minor, Sirius forms the Winter Hexagon (or Winter Circle) asterism, which appears prominently in the northern sky between December and March.

Sirius is also part of the Winter Triangle (or the Great Southern Triangle), together with Procyon in Canis Minor and Betelgeuse in Orion constellation.

Adhara is the second brightest star in Canis Major and the 24th brightest star in the night sky. Its name comes from the Arabic aðāra, which means “virgins.” It is a binary star that lies about 430 light years from Earth.

About 4.7 million years ago, Adhara was the brightest star in the sky. It was only 34 light years distant and had a magnitude of -3.99. No other star has ever been as bright since, nor is one expected to be in the next five million years.

Wezen is a yellow-white F-type supergiant approximately 1,800 light years distant. It has an apparent magnitude of 1.83. It is the third brightest star in Canis Major. Wezen can be found about 10 degrees southeast of Sirius. Its name is derived from the Arabic al-wazn“, meaning “the weight.” The star’s estimated age is 10 million years, which means that it will become a red supergiant within the next 100,000 years, and eventually a supernova.

Mirzam (Al-Murzim, Murzim) is a blue-white giant with brightness varying between magnitude 1.95 and 2.00. It is approximately 500 light years distant. The star’s name comes from the Arabic word for “the herald,” presumably referring to Mirzam’s position in the sky. (The star rises before Sirius, i.e. it heralds it.)

Mirzam is classified as a Beta Cephei variable, a star that exhibits variations in brightness as a result of pulsations of its surface.

Aludra is an Alpha Cygni type variable star, with luminosity varying between magnitude 2.38 and 2.48. It is a blue supergiant, approximately 3,000 light years distant, and already approaching the final stages of its life. It is expected to become a supernova within the next few million years.

The star’s name is derived from the Arabic al-‘aðrā, meaning “the virgin.” Along with Adhara, Wezen and Omicron-2 Canis Majoris, Aludra was one of the stars known as the Virgins.

Tau CMa is an eclipsing spectroscopic binary star about 3,200 light years from Earth. It is the brightest star of the open cluster NGC 2362 (Caldwell 64), which is why the cluster is sometimes called the Tau Canis Majoris Cluster.

The star is an O-type blue supergiant classified as a Beta Lyrae type variable. Its brightness varies between magnitude 4.32 and 4.37 with a period of 1.28 days.

Phurud (or Furud) is a spectroscopic binary star. Its name comes from the Arabic phrase al-furud, which means “the solitary ones.” The star lies about 336 light years from Earth and has an apparent magnitude of 3.02.

The brighter component is a blue-white B-type main sequence dwarf. The companion is an unseen star. The two orbit around a common centre once every 675 days.

Muliphein is a blue-white B-type right giant, approximately 402 light years distant. It has an apparent magnitude of 4.11.

M41 is an open cluster located four degrees south of Sirius. It is 25-26 light years in diameter and between 190 and 240 million years old.

The cluster contains about 100 stars, with the brightest one being a K3-type giant located near the centre of the cluster. M41 also contains several red giants.

The cluster is approximately 2,300 light years distant. It has an apparent magnitude of 4.5. It was discovered by the Italian astronomer Giovanni Batista Hodierna in the 17th century.

The Canis Major Dwarf Galaxy (CMa Dwarf) is an irregular galaxy, roughly elliptical in shape, that is believed to be the nearest neighbouring galaxy to the solar system.

The Canis Major Dwarf Galaxy contains about a billion stars, among them a significant number of red giants. The galaxy was first discovered in 2003 by an international team of astronomers. It is a difficult object to observe because it lies behind the plane of the Milky Way, obscured by stars, dust and gas.

Because the galaxy’s main body is highly degraded, the Canis Major Dwarf is believed to be severely affected by the Milky Way’s gravitational field.

There are a number of globular clusters associated with the galaxy, among them NGC 1851, NGC 1904, and NGC 2808. These clusters are thought to be remnants of the dwarf’s globular cluster system before the galaxy started getting pulled apart and swallowed into the Milky Way.

NGC 2359 is an emission nebula in Canis Major. It is about 30 light years in size, and some 15,000 light years distant from Earth.

The nebula is formed around the central Wolf-Rayet star, an extremely hot giant which is about to explode as a supernova.

NGC 2207 and IC 2163 are colliding spiral galaxies in Canis Major. They are approximately 80 million light years distant. The galaxies were discovered by the English astronomer John Herschel in 1835. They have apparent magnitudes of 12.2 and 11.6, respectively.

The galaxies are in the process of tidal stripping, with the larger galaxy pulling stars and other material from the smaller one.