March is the best time of year to observe some of the well-known deep sky objects located in these constellations, including Praesepe (the Beehive Cluster, M44), the Eight-Burst Nebula, the Theta Carinae Cluster, the Wishing Well Cluster and the Carina Nebula.

Situated between the far more prominent Ursa Major and Auriga, Lynx is the largest of the March constellations, occupying an area of 545 square degrees. It is, however, very faint, with no stars brighter than magnitude 3.00. Created to fill the gap between its two better known neighbours, the constellation was named Lynx because it took the eyesight of a lynx to spot it.

Lynx contains several notable deep sky objects, including the Intergalactic Wanderer (NGC 2419), one of the most distant globular clusters known in the Milky Way, the unbarred spiral galaxy NGC 2683, also known as the UFO Galaxy, and the Bear’s Paw Galaxy (NGC 2537), a blue compact dwarf galaxy.

Cancer, the celestial crab, is slightly smaller (506 square degrees) and also relatively faint. With no stars brighter than magnitude 3.00, it is the second faintest of the zodiac constellations. However, Cancer is a popular target for stargazers because it contains two well-known deep sky objects.

Praesepe, also known as the Beehive Cluster or Messier 44, lies in the centre of the constellation, and is one of the nearest open star clusters to Earth. Covering an area three times the size of the full Moon, Praesepe is also one of the largest visible open clusters in the sky. The brightest stars in the cluster are 6th magnitude.

The other notable open cluster in Cancer, Messier 67, is smaller, fainter and more concentrated. It occupies an area roughly the size of the full Moon and its brightest stars are of 10th magnitude.

Canis Minor is home to Procyon, one of the brightest stars in the sky. Representing one of Orion’s dogs (the other being Canis Major), the constellation is only the 71st in size with an area of 183 square degrees. It is, however, considerably easier to find than Lynx and Cancer because Procyon, the eighth brightest star in the sky, marks one of the vertices of the Winter Triangle and is also part of the Winter Hexagon, two prominent winter asterisms.

The Winter Triangle and Hexagon

Vela and Carina are the largest of the southern March constellations. With areas 500 and 494 square degrees in size respectively, the neighbouring constellations are prominent in the southern winter sky. Together with Puppis, they once formed a much larger constellation known as the Argo Navis, which represented the Argonauts’ ship, but was divided into the three smaller constellations in the mid-18th century.

Vela, which represents the sails, contains a number of interesting deep sky objects, including the Eight-Burst Nebula (NGC 3132, Southern Ring Nebula), one of the several dozen planetary nebulae in the constellation, the Gum Nebula (Gum 12) with the Vela Supernova Remnant, Vela Pulsar and Pencil Nebula (NGC 2736).

Remnants from a star that exploded thousands of years ago created a celestial abstract portrait, as captured in this NASA Hubble Space Telescope image of the Pencil Nebula. Officially known as NGC 2736, the Pencil Nebula is part of the huge Vela supernova remnant, located in the southern constellation Vela. Discovered by Sir John Herschel in the 1840s, the nebula’s linear appearance triggered its popular name. The nebula’s shape suggests that it is part of the supernova shock wave that recently encountered a region of dense gas. It is this interaction that causes the nebula to glow, appearing like a rippled sheet. In this snapshot, astronomers are looking along the edge of the undulating sheet of gas. This view shows large, wispy filamentary structures, smaller bright knots of gas, and patches of diffuse gas. The Hubble Heritage Team used the Advanced Camera for Surveys in October 2002 to observe the nebula. The region of the Pencil Nebula captured in this image is about three fourths of a light-year across. The Vela supernova remnant is 114 light-years (35 parsecs) across. The remnant is about 815 light-years (250 parsecs) away from our solar system. Image: NASA and The Hubble Heritage Team

The stars Delta and Kappa Velorum in Vela and Epsilon and Iota Carinae in Carina form the False Cross, an asterism sometimes mistaken for the brighter but smaller Southern Cross, which is used in navigation to find true south.

Carina also contains Eta Carinae, one of the best known variable stars in the sky. The star is embedded inside the Homunculus Nebula, a bipolar nebula which is part of the larger Carina Nebula (NGC 3372), a vast star-forming region that consists of both bright and dark nebulae. Even though it is about four times larger than the Orion Nebula (Messier 42), its location in the southern sky makes it invisible to most northern observers and less well-known than M42. Eta Carinae itself cannot be seen north of latitude 30°N. It is a binary system composed of one of the most massive stars known and a companion that is also highly luminous, likely of spectral class O. The primary component is expected to end its life in a supernova explosion in the relatively near future.

A huge, billowing pair of gas and dust clouds are captured in this stunning NASA Hubble Space Telescope image of the supermassive star Eta Carinae. Eta Carinae was observed by Hubble in September 1995 with the Wide Field and Planetary Camera 2 (WFPC2). Images taken through red and near-ultraviolet filters were subsequently combined to produce the color image shown. A sequence of eight exposures was necessary to cover the object’s huge dynamic range: the outer ejecta blobs are 100,000 times fainter than the brilliant central star. Eta Carinae suffered a giant outburst about 160 years ago, when it became one of the brightest stars in the southern sky. Though the star released as much visible light as a supernova explosion, it survived the outburst. The explosion produced two lobes and a large, thin equatorial disk, all moving outward at about 1 million kilometers per hour. Image: Nathan Smith (University of California, Berkeley), and NASA

Pyxis and Volans are considerably smaller and fainter than Vela and Carina. Neither constellation contains any stars brighter than magnitude 3.00.

Pyxis, which represents a mariner’s compass, is located next to what used to be Argo Navis and occupies 221 square degrees. Notable deep sky objects in the constellation include the planetary nebula NGC 2818, the Pyxis Globular Cluster, the open cluster NGC 2627 and the barred spiral galaxy NGC 2613.

Volans, the 76th constellation in size, occupies an area of only 141 square degrees and represents the flying fish. It is home to several interesting galaxies. These are the Lindsay-Shapley Ring (AM 0644-741), an unbarred lenticular galaxy also classified as a ring galaxy that can be seen not far from the Large Magellanic Cloud, the elliptical galaxy NGC 2434, and the Meathook Galaxy (NGC 2442 and NGC 2443), an intermediate spiral galaxy named for its distorted, hook-like shape. 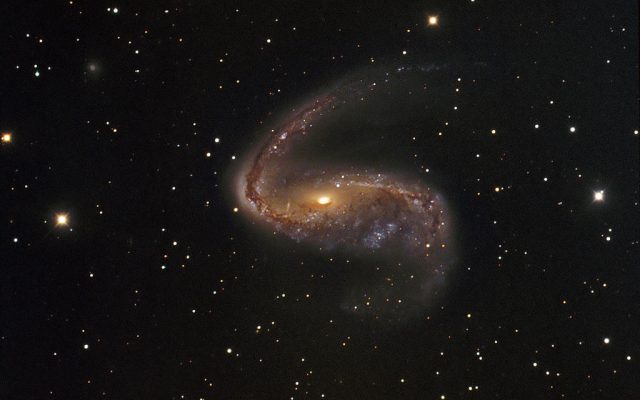 The distorted galaxy NGC 2442, also known as the Meathook Galaxy, is located some 50 million light-years away in the constellation of Volans (the Flying Fish). The galaxy is 75,000 light-years wide and features two dusty spiral arms extending from a pronounced central bar that give it a hook-like appearance, hence its nickname. The galaxy’s distorted shape is most likely the result of a close encounter with a smaller, unseen galaxy. Image: ESO/IDA/Danish 1.5 m/R. Gendler, J.-E. Ovaldsen, C. C. Thöne and C. Féron

The table below shows the latitudes between which the March constellations are visible.