The Sickle of Leo is one of the most recognizable patterns in the spring sky. Formed by some of the brightest stars in the constellation Leo, the asterism outlines the mane of the celestial Lion. 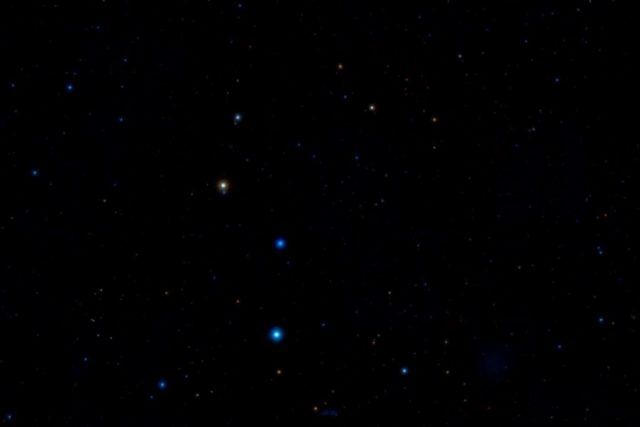 The Sickle of Leo, image: Wikisky

The Sickle is easy to find using the bright stars that form the inner side of the bowl of the Big Dipper. An imaginary line drawn from Megrez through Phecda points in the general direction of Regulus and, going from Regulus, the rest of the asterism is easy to identify. 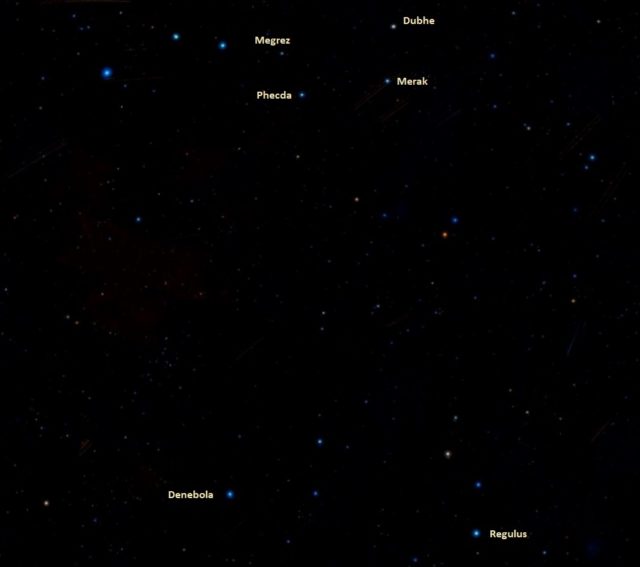 Big Dipper and the Sickle of Leo, image: Wikisky

Regulus, the brightest of the stars that form the Sickle, is the 21st brightest star in the sky. It is a multiple star system with a combined apparent magnitude of 1.35. The system consists of at least four stars. The main pair, designated Regulus A, is a spectroscopic binary system consisting of a blue-white main sequence star and a smaller companion, likely a white dwarf. The secondary pair, Regulus BC, is composed of two main sequence stars, one orange (K2V) and the other red (M4V). The system lies 79.3 light years away. 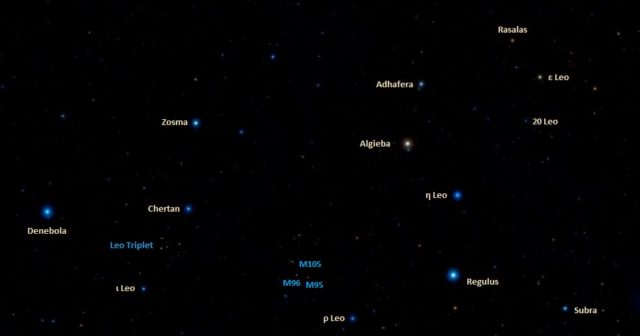 Epsilon Leonis is a yellow bright giant of the spectral type G1 II. It has an apparent magnitude of 2.98 and lies at a distance of 247 light years. The star has a radius 21 times that of the Sun and a mass 4.01 times solar. It is 288 times more luminous than the Sun. It has been known by the traditional names Ras Elased Australis and Algenubi, but neither of these has been formally approved by the International Astronomical Union (IAU).

Rasalas, Mu Leonis, is an orange giant of the spectral type K2 IIIb. It has an apparent magnitude of 3.88 and lies 124.1 light years away. The star has a mass 1.5 times that of the Sun and a radius 14 times solar. It shines with 63 solar luminosities.

Adhafera, Zeta Leonis, is a white giant star with the stellar classification F0 III. It has three times the Sun’s mass and has expanded to a size of 6 solar radii. It is 85 times more luminous than the Sun. It lies at a distance of 274 light years and has an apparent magnitude of 3.33.

Algieba, Gamma Leonis, is the second brightest star in Leo, after Regulus. It is a binary star system consisting of an orange giant of the spectral type K0III and a class G giant. The system has a combined apparent magnitude of 2.08 and is located about 130 light years away. The primary component has 1.23 solar masses and a radius 31.88 times that of the Sun. It is 320 times more luminous than the Sun.

Eta Leonis may not appear particularly prominent compared to its brighter neighbours, but it is the behemoth of the group. It is a white supergiant of the spectral type A0 Ib located at a distance of 1,270 light years from Earth. The star is 19,000 times more luminous than the Sun. It has 10 solar masses and has expanded to a size 47 times that of the Sun. It has an apparent magnitude of 3.486 and an absolute magnitude of -5.54. The star is only 25 million years old.

The Sickle makes it easy to find several bright deep sky objects in Leo. The best-known ones are those located between Regulus and Denebola (Beta Leonis), the star that marks the Lion’s tail: the M66 Group (Leo Triplet) and the M96 Group (Leo I Group).

Located closer to Regulus, the Leo I Group contains three Messier objects – Messier 95, Messier 96, and Messier 105 – and a number of fainter galaxies. Messier 95 is a barred spiral galaxy with a visual magnitude of 11.4, located 32.6 million years away. Messier 96 is a magnitude 10.1 intermediate spiral galaxy 31 million light years away, and Messier 105 is an elliptical galaxy with an apparent magnitude of 10.2 lying at an approximate distance of 36.6 million light years. The group lies within the Virgo Supercluster. 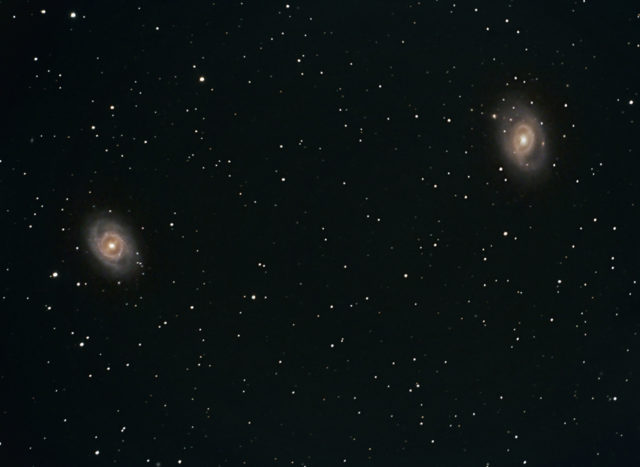 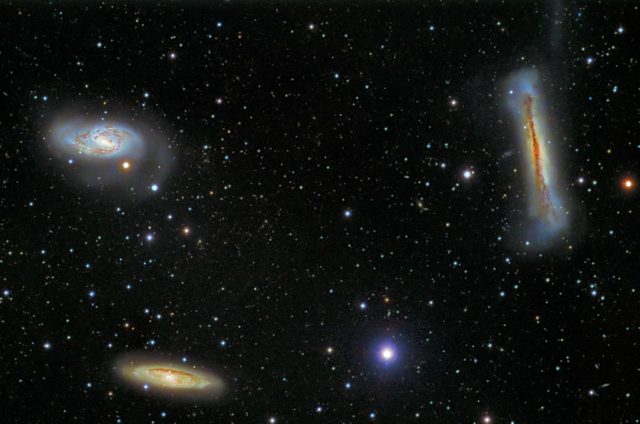 Hickson 44 (HCG 44), a compact group of galaxies about 80 million light years away, is found between Adhafera and Algieba. 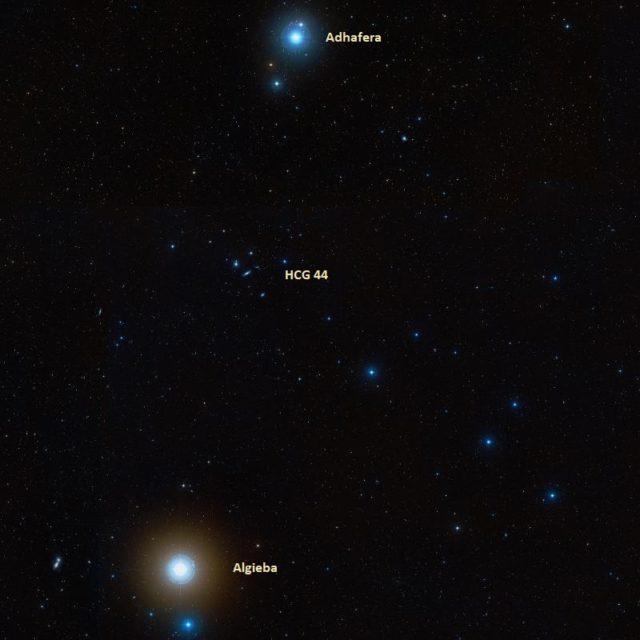 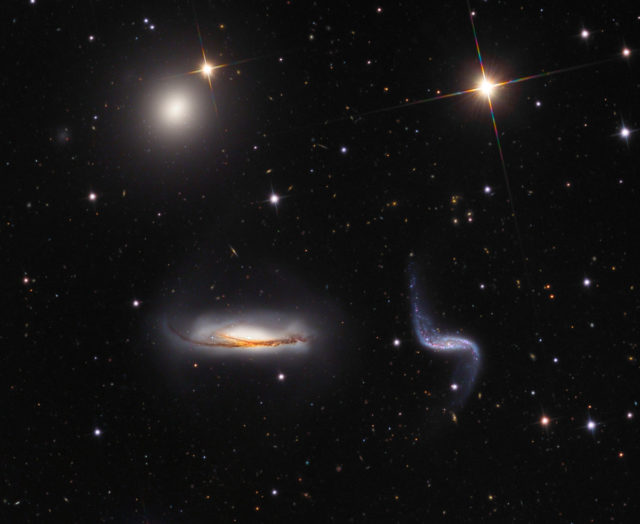 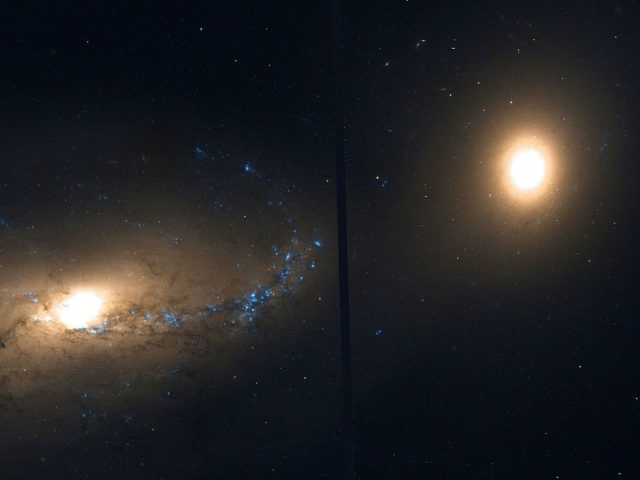 The best time of year to observe the stars and deep sky objects in Leo is during the month of April.