Octans constellation is located in the southern hemisphere. It was named after the octant, a navigational instrument.

The constellation was introduced by the French astronomer Nicolas Louis de Lacaille in the 18th century. Octans is the location of the South Celestial Pole. The constellation is circumpolar to the South Pole – it never sets below the horizon. It does not have any stars brighter than fourth magnitude or any deep sky objects that are bright enough for observers. Octans contains the southern pole star, Sigma Octantis, which is located about a degree away from the South Celestial Pole. The star cannot be used in navigation because it is too faint.

Octans is the 50th constellation in size, occupying an area of 291 square degrees. It lies in the fourth quadrant of the southern hemisphere (SQ4) and can be seen at latitudes between +0° and -90°. The neighboring constellations are Apus, Chamaeleon, Hydrus, Indus, Mensa, Pavo and Tucana.

Octans contains two stars with known planets and has no Messier objects. The brightest star in the constellation is Nu Octantis, with an apparent magnitude of 3.76. There are no meteor showers associated with the constellation.

Octans was created by Nicolas Louis de Lacaille in 1752. There are no myths associated with the constellation, in part because it is located too far south. Lacaille created it out of dim circumpolar stars and originally named it l’Octans de Reflexion, or “the reflecting octant,” which was the precursor to the modern sextant.

The constellation was also known as Octans Hadleianus, after John Hadley, the English mathematician who invented the octant in 1730. When he created the constellation, Lacaille moved several stars from the neighbouring constellation Hydrus.

Nu Octantis is the brightest star in the constellation. It has an apparent magnitude of 3.76 and is approximately 69 light years distant from the solar system. The star is an orange giant with the stellar classification K1III. It is one of the least luminous giant stars known, with a luminosity only 16 times that of the Sun. It is also a relatively small giant, with a radius only 5.9 times solar and a mass 1.4 times that of the Sun. The star will eventually expand and, in about 100 million years, it will become 15 times larger and 60 times brighter than it is now. The star’s estimated age is about 12.1 billion years.

Nu Octantis has a binary companion, a K7-M1 class dwarf with a mass 0.5 times solar. The two are separated by 2.55 astronomical units and orbit each other with a period of 2.9 years.

The primary star, Nu Octantis A, has a unconfirmed planet with a mass at least 2.5 times that of Jupiter in its orbit.

Beta Octantis is a white star halfway between the dwarf and subgiant stage of evolution. It has the stellar classification of A9IV-V. It has an apparent magnitude of 4.14 and is approximately 140 light years distant from the Sun. It is the second brightest star in Octans constellation.

Delta Octantis is an orange giant star belonging to the stellar class K2III. It has an apparent magnitude of 4.31 and is approximately 279 light years distant from the solar system.

The star has a mass 1.2 times that of the Sun and a radius 25 times solar. Its estimated age is the same as the Sun’s, about 4.3 billion years.

Delta Octantis is the southern pole star on Saturn.

Theta Octantis is another orange giant in Octans. It has the stellar classification K3III. It has an apparent magnitude of 4.79 and is approximately 221 light years distant from the Sun.

Alpha Octantis is a spectroscopic binary star composed of two F-class giants. It has a combined visual magnitude of 5.15 and is approximately 148 light years distant from the solar system.

The two stars in the Alpha Octantis system are believed to belong to the stellar classes F4III and F5III. They orbit each other with a period of 9.073 days. The combined luminosity of the system is 13.9 times that of the Sun.

Alpha Octantis is classified as a Beta Lyrae-type eclipsing binary system, one in which variations in luminosity are caused by one component periodically passing in front of the other and blocking its light. Beta Lyrae-type stars are usually in such close orbit that their shapes are distorted by each other’s gravitational forces, and they typically have ellipsoidal shapes.

Sigma Octantis is currently the southern pole star, and is sometimes known by the name Polaris Australis. It is the counterpart to Polaris in Ursa Minor, the northern pole star. Sigma Octantis is 25 times fainter than the North Star, which makes it is too dim to be used for navigation, so it is the Southern Cross, which is usually used for establishing the position of the South Celestial Pole.

The star is a yellow-white giant star belonging to the stellar class F0III. It has an apparent magnitude of 5.42 and is approximately 270 light years distant from the Sun. It has about 2 solar masses.

Sigma Octantis is classified as a Delta Scuti variable, which is to say a variable star that exhibits variations in brightness as a result of both radial and non-radial pulsations of its surface. These stars are used as standard candles for determining the distances to deep sky objects such as globular and open star clusters and the Galactic centre. Sigma Octantis exhibits a variation of 0.03 magnitudes over a period of 2.3 hours. 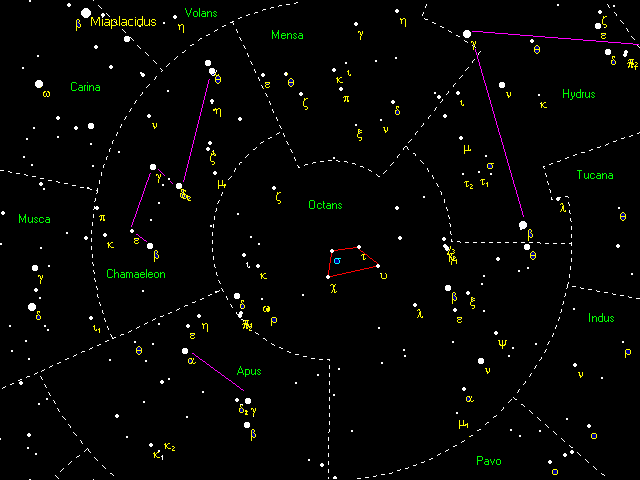 A trapezoidal asterism within the constellation Octans, useful for locating Sigma Octantis

Mu-2 Octantis is another binary system in Octans. It consists of two yellow dwarf stars, HD 196067 and HD 196068, about 144 light years distant from Earth. The system shares the Mu designation with Mu-1 Octantis, from which it is separated by 50 minutes of arc.

The two stars in the Mu-2 Octantis system are separated by 17 arc seconds and gravitationally bound. The system has an apparent magnitude of 6.51.

HD 142022 is another binary system in the constellation. It has an apparent magnitude of 7.69 and is approximately 117 light years distant from the Sun. The primary component belongs to the spectral class G9V and has a mass 1% less than the Sun. It is a very old star, only about 400 million years younger than the Universe itself. A planet was discovered orbiting it in 2005.

HD 212301 has the stellar classification of F8V, which makes the star a yellow-white dwarf. It has an apparent magnitude of 7.77 and is 171.93 light years distant from the Sun. The star has a planet orbiting it with a period of 2.24572 days.