Cassiopeia constellation is located in the northern sky. It was named after Cassiopeia, the vain and boastful queen in Greek mythology.

The constellation was first catalogued by the Greek astronomer Ptolemy in the 2nd century, along with other constellations in the Perseus family (except Lacerta). Cassiopeia is easily recognizable in the sky because of its distinctive W shape.

The constellation contains several notable deep sky objects, among them the open clusters Messier 52 and Messier 103, the Heart Nebula and the Soul Nebula, the supernova remnant Cassiopeia A, the star-forming cloud popularly known as the Pacman Nebula, and the White Rose Cluster.

Cassiopeia is the 25th largest constellation in the night sky, occupying an area of 598 square degrees. It lies in the first quadrant of the northern hemisphere (NQ1) and can be seen at latitudes between +90° and -20°. The neighboring constellations are Andromeda, Camelopardalis, Cepheus, Lacerta, and Perseus.

Cassiopeia belongs to the Perseus family of constellations, along with Andromeda, Auriga, Cepheus, Cetus, Lacerta, Pegasus, Perseus, and Triangulum.

Cassiopeia has three stars with known planets and contains two Messier objects: M103 (NGC 581) and M52 (NGC 7654). The brightest star in the constellation is Schedar, Alpha Cassiopeiae. The Perseid meteor shower is associated with the constellation Cassiopeia.

In mythology, Cassiopeia was the wife of King Cepheus (represented by the neighbouring constellation Cepheus in the sky) of Ethiopia. Once, she boasted that she was more beautiful than the Nereids. The Nereids were the 50 sea nymphs fathered by the Titan Nereus. They were enraged by Cassiopeia’s comments and appealed to Poseidon to punish Cassiopeia for her boastfulness. Poseidon was married to one of the nymphs, Amphitrite.

The sea god obliged and sent Cetus, a sea monster represented by the constellation Cetus (the Whale), located in the same region of the sky, to ravage the coast of Cepheus’ kingdom. Cepheus turned to an oracle for help and the oracle told him that, in order to appease Poseidon, he and Cassiopeia had to sacrifice their daughter Andromeda to the sea monster. Reluctantly, they did so, leaving Andromeda chained to a rock for the monster to find. However, she was saved in the last minute by the Greek hero Perseus, who happened to be passing by, saw Andromeda and rescued her from the monster.

Perseus and Andromeda were later married. At the wedding, one of her former suitors, named Phineus, appeared and claimed that he was the only one who had the right to marry Andromeda.

There was a fight and Perseus, desperately outnumbered, used the head of Medusa, the monster he had recently slain, to defeat his opponents. One look at Medusa’s head turned them all into stone. In the process, however, the king and queen were also killed because they did not look away from the monster’s head in time.

It was Poseidon who placed Cassiopeia and Cepheus in the sky. Cassiopeia, the myth goes, was condemned to circle the celestial pole forever, and spends half the year upside down in the sky as punishment for her vanity. She is usually depicted on her throne, still combing her hair.

Cassiopeia is famous for its distinctive W shape, an asterism formed by five bright stars in the constellation. The stars, from left to right, are Epsilon, Delta, Gamma, Alpha and Beta Cassiopeiae.

It is a suspected variable star. Its apparent magnitude can be either slightly brighter or dimmer than Caph (Alpha Cassiopeiae), depending on which photometric system is used. It is in the range from 2.20 to 2.23 magnitudes.

Alpha Cassiopeiae is located at the bottom right of the W asterism.

The star’s traditional name, Schedar, is derived from the Arabic şadr, which means “breast.” The name refers to the star’s position, marking Cassiopeia’s heart.

Delta Scuti variables, which are also known as Dwarf Cepheids, Al Velae or Al Velorum stars, typically show fluctuations in luminosity due to both radial and non-radial pulsations on their surface. They are usually giants or main sequence stars of spectral types ranging between A0 and F5.

Caph has a mean apparent magnitude of 2.27. Its traditional name is derived from the Arabic kaf, which means “palm” (i.e. palm of the Pleiades or reaching from the Pleiades, the famous cluster in Taurus constellation). The star’s other traditional names are al-Sanam al-Nakah and al-Kaff al-Khadib.

Together with the stars Alpheratz in Andromeda and Algenib in Pegasus, Caph was known as one of the Three Guides; three bright stars marking the equinoctial colure, the imaginary line from Caph to Alpheratz to the celestial equator, at a point where the Sun crosses it at each spring and autumn equinox.

The yellow-white star is 28 times brighter than the Sun and four times the size. It is currently in the process of cooling down and will eventually become a red giant.

Gamma Cassiopeiae is the central star in the W shape and currently the brightest star in the constellation. It is a blue star (spectral type B0.5 IVe), about 610 light years distant, with a luminosity 40,000 times that of the Sun, and having about 15 solar masses.

Gamma Cassiopeiae is an eruptive variable star that serves as a prototype of a class of stars, the Gamma Cassiopeiae variable stars. It exhibits irregular variations in brightness, which ranges between 2.20 magnitudes and 3.40 magnitudes. The star rotates very rapidly and bulges outward along the equator. As a result of its fast spinning, a “decretion” disk of lost mass and material forms around the star, which causes the fluctuations in luminosity.

The Chinese call the star Tsih, which means “the whip.” It also has the nickname Navi, which it got from the American astronaut Virgil Ivan Grissom – Navi is Ivan spelled backwards. The star was used as a navigational reference point by astronauts.

Gamma Cassiopeiae is a spectroscopic binary star, an optical double with a magnitude 11 companion about two arc seconds away, one with a mass comparable to that of the Sun. The orbital period is roughly 204 days.

The star is a known X-ray source. The amount of X-ray radiation that it emits is 10 times higher than that of other B or Be class stars. Gamma Cassiopeiae was the first Be star known (e stands for emission).

Delta Cassiopeiae is an eclipsing binary star with a period of 460 days. It belongs to the spectral class A5. It is about 99 light years distant and has an apparent magnitude that varies between 2.68 and 2.74. It is the fourth brightest star in the constellation. The star’s traditional name, Ruchbah, comes from the Arabic rukbah, which means “the knee”. Sometimes the star is also known as Ksora.

Epsilon Cassiopeiae is a bright blue-white B-class giant, approximately 440 light years distant. It is 2,500 times more luminous than the Sun. It has an apparent magnitude of 3.34. The star’s estimated age is 65 million years and it is at the end of the hydrogen-fusing cycle. Segin is notable for showing extremely weak spectral absorptions of helium.

Eta Cassiopeiae is the nearest star in Cassiopeia to our solar system, lying only 19.4 light years away. It is similar to the Sun; a yellow-white G-class hydrogen fusing dwarf, slightly cooler than the Sun with a surface temperature of 5730 Kelvin. It has an apparent magnitude of 3.45.

Achird has a dimmer companion, an orange K-class dwarf with an apparent magnitude of 7.51, located 11 arc seconds away. The two stars are classified as an RS Canum Venaticorum type variable star; they form a close binary star and have active chromospheres that cause large stellar spots which, in turn, cause variations in the star system’s luminosity. The system’s brightness varies by 0.05 magnitudes.

Zeta Cassiopeiae is a blue-white subgiant (spectral type B2IV), approximately 600 light years distant. It has an apparent magnitude of 3.67.

Zeta Cassiopeiae is classified as a SPB variable star (Slow Pulsating B star), the first one of its kind discovered to have a magnetic field. The star’s rotation speed is 56 km/s and its rotation period is 5.37 days.

Rho Cassiopeiae belongs to a very rare class of stars, the yellow hypergiants, only seven of which are currently known in the Milky Way Galaxy. The star belongs to the spectral class G2Ia0e. It is approximately 11,650 light years distant and one of the most luminous stars known. In spite of the distance, Rho Cassiopeiae is visible to the naked eye.

Rho Cassiopeiae is 550,000 times brighter than the Sun, with an absolute magnitude of -7.5. Its apparent magnitude varies from 4.1 to 6.2. The star is classified as a semi-regular variable. It undergoes enormous outbursts roughly every 50 years, resulting in change in luminosity. In 2000-2001, the star ejected about 10,000 Earth masses in one of these outbursts.

Rho Cassiopeiae is suspected to already have exploded as a supernova because it has used up most of its nuclear fuel, but if this is the case, the light from the explosion has yet to reach us.

V509 Cassiopeiae is another G-type hypergiant, at least 7,800 light years distant. The yellow-white star is classified as a semi-regular variable. Its luminosity varies between magnitudes 4.75 and 5.5.

Messier 52 is an open cluster, approximately 5,000 light years distant. It has an apparent magnitude of 5.0 and can be seen with binoculars.

The age of the cluster is estimated to be around 35 million years. It is 13 arc minutes (19 light years) in diameter.

The cluster was discovered by Charles Messier in 1774. The brightest stars in it are two yellow giants of magnitude 7.77 and 8.22.

Messier 103 is another open cluster in Cassiopeia. It lies approximately 10,000 light years from Earth and contains 172 stars. The age of the cluster is estimated to be about 25 million years.

The cluster was discovered by the French astronomer Pierre Méchain in 1781. It was the last object Charles Messier entered into his catalogue.

Cassiopeia A is a supernova remnant. It is notable for being the brightest astronomical radio source in the sky. 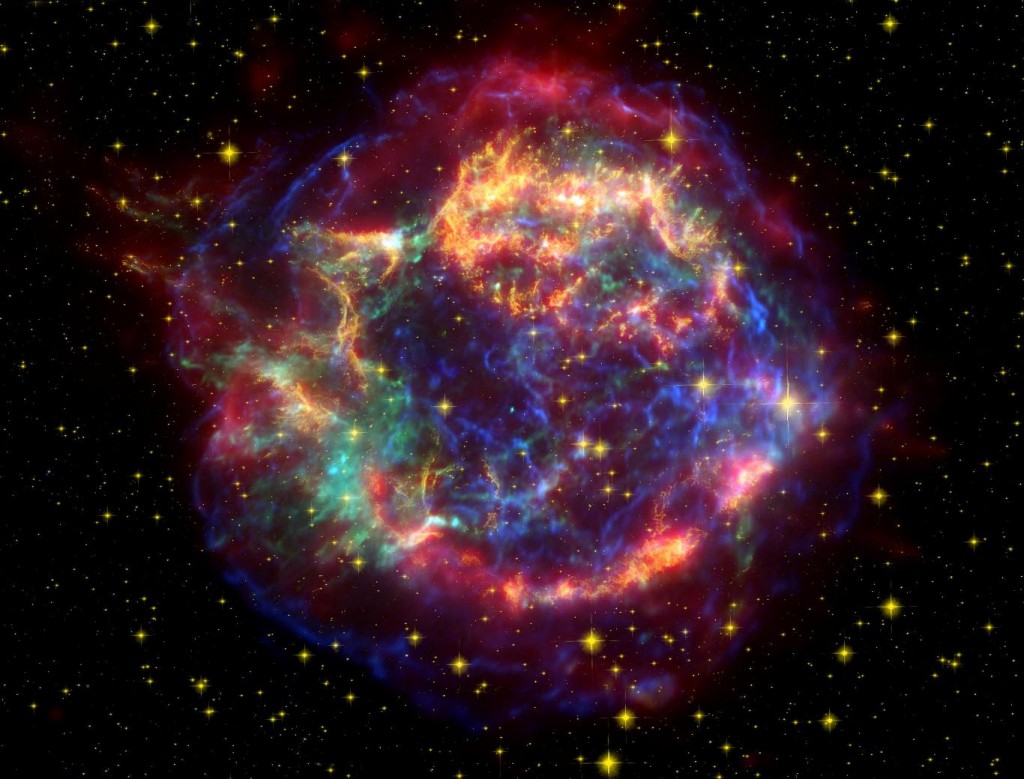 It is the strongest radio source in the sky outside the solar system and was one of the first radio sources to be discovered, in 1947.

The cloud of material ejected in the explosion is about 10 light years across and is expanding at the rate of 4,000-6,000 km/s. It has a temperature of about 50 million degrees Fahrenheit.

The explosion occurred at an approximate distance of 11,000 years from Earth and the first light of the supernova is believed to have reached us about 300 years ago.

NGC 281 is an H II region, a large gas cloud in which star formation has recently taken place. It contains a large amount of ionised atomic hydrogen (H II) which is lit by the ultraviolet light of young, hot, blue stars. It was nicknamed the Pacman Nebula because of its resemblance to the character from the popular video game. 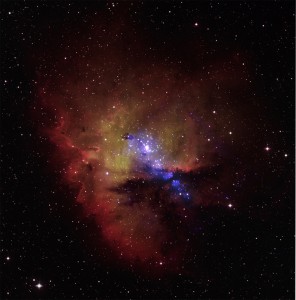 The nebula is 9,500 light years from Earth. It was discovered by American astronomer E.E. Barnard in 1883.

It has an apparent magnitude of 6.7. It was discovered by the British astronomer Caroline Herschel in 1783.

The cluster is also known as Caroline’s Rose or The White Rose because the loops of stars in it resemble the pattern of rose petals.

NGC 185 is a dwarf spheroidal galaxy, approximately 2.08 million light years from Earth. It is a satellite galaxy of the Andromeda Galaxy (Messier 31) and forms a physical pair with NGC 185.

The galaxy is classified as a type 2 Seyfert galaxy. It has an active galactic nucleus (AGN).

The galaxy was discovered by the English astronomer John Herschel (Caroline Herschel’s brother) in 1787 and first photographed by the American astronomer James Edward Keeler between 1898 and 1900. He photographed the galaxy using the Crossley telescope (36-inch/910mm), the reflecting telescope located at Lick Observatory in California.

Atypical for a dwarf elliptical galaxy, NGC 185 contains young clusters of stars and shows evidence of star formation that occurred in the cluster until recently.

NGC 147 is another dwarf spheroidal galaxy in Cassiopeia, approximately 2.53 million light years distant. Like NGC 185, it is a satellite galaxy of the Andromeda Galaxy (Messier 31) and a member of the Local Group of galaxies. It was originally discovered by John Herschel in 1829. It has an apparent magnitude of 10.5.