Cassiopeia A (Cas A) is a supernova remnant located in the constellation Cassiopeia. It lies at an approximate distance of 11,000 light years from Earth and has a diameter of about 10 light years.

The remnant can be seen in visible light with amateur telescopes, starting with 9.25-inch instruments with filters.  It can also be observed in infrared and X-ray wavelengths and appears as a ring of expanding material about 5 arcminutes across.

Cassiopeia A is the remnant of a supernova that first became visible from Earth about 300 years ago. There are no recorded sightings of the supernova event, likely due to its light having been absorbed by interstellar dust. The supernova, however, may have been recorded by the English astronomer John Flamsteed, who noted a sixth magnitude star on August 16, 1680 and recorded it as 3 Cassiopeiae. 3 Cassiopeiae is a hypothethical star, one that doesn’t correspond to any star observed today. Its position, as given by Flamsteed, is within 10 arcminutes of the Cas A radio source. 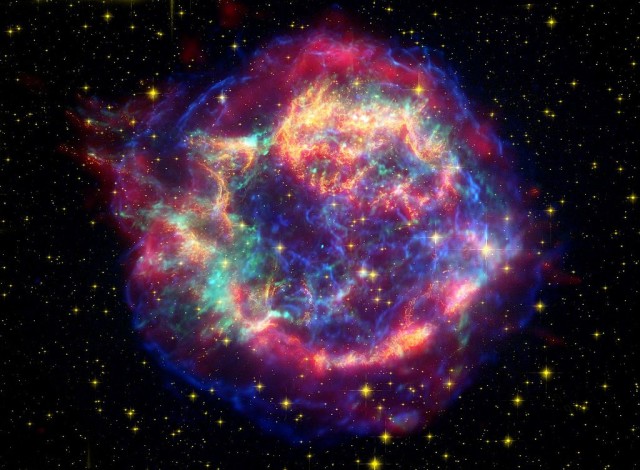 This stunning false-color picture shows off the many sides of the supernova remnant Cassiopeia A. It is made up of images taken by three of NASA’s Great Observatories, using three different wavebands of light. Infrared data from the Spitzer Space Telescope are colored red; visible data from the Hubble Space Telescope are yellow; and X-ray data from the Chandra X-ray Observatory are green and blue. Image: NASA/JPL-Caltech/STScI/CXC/SAO Animation: NASA/JPL-Caltech/Univ. of Ariz./STScI/CXC/SAO

Another possible explanation for no recorded sightings of the progenitor supernova is that the progenitor star was exceptionally massive and had ejected much of its outer layers before exploding. The clouds of expelled material would have cloaked the light of the supernova event.  The progenitor star had an estimated mass 15 to 20 times that of the Sun.

The remnant’s expansion shell has an estimated temperature of 50 million degrees Fahrenheit and is expanding at 4,000 to 6,000 km/s. It will keep expanding for thousands of years. 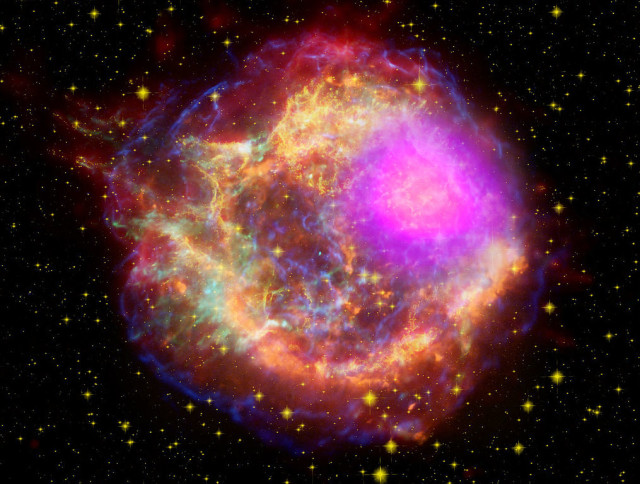 Cassiopeia A was discovered in 1947 by radio astronomers from Cambridge, England. It was one of the first discrete radio sources to be detected. The optical component of the remnant was first discovered in 1950.

The central star of Cassiopeia A is a neutron star. It was the first neutron star detected to have a carbon atmosphere.  In 2011, astronomers discovered that the star was rapidly cooling.

Cassiopeia A is catalogued as 3C 461 in the Third Cambridge Catalogue of Radio Sources and as G111.7-2.1 in the Green Catalog of Supernova Remnants. 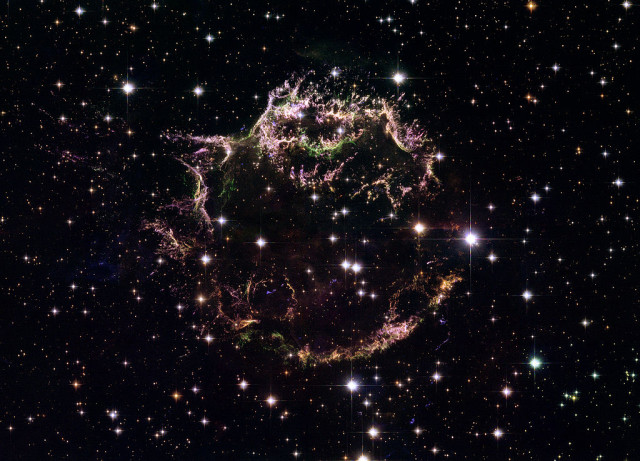 Image taken with the NASA/ESA Hubble Space Telescope provides a detailed look at the tattered remains of a supernova explosion known as Cassiopeia A (Cas A). It is the youngest known remnant from a supernova explosion in the Milky Way. The Hubble image shows the complex and intricate structure of the star’s shattered fragments. Image: NASA, ESA, and the Hubble Heritage (STScI/AURA)-ESA/Hubble Collaboration. Acknowledgement: Robert A. Fesen (Dartmouth College, USA) and James Long (ESA/Hubble)

Cassiopeia A is the brightest extrasolar radio source in the sky at frequencies above 1 GHz. At frequencies below 1 GHz, it is not as intense as Cygnus A, a radio galaxy located in the constellation Cygnus.

Phosphorus was reported to have been detected in Cassiopeia A in 2013, confirming that the element is indeed produced in supernova explosions. The phosphorus-iron ratio was up to 100 times higher in the material from the remnant than in the host galaxy (the Milky Way) in general.

Cassiopeia A was the only supernova remnant to be modelled in 3D and the only deep sky object to be included in the Smithsonian 3D project. 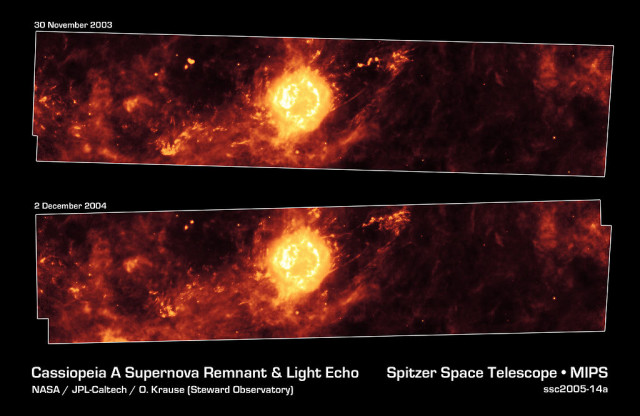 These Spitzer Space Telescope images, taken one year apart, show the supernova remnant Cassiopeia A (yellow ball) and surrounding clouds of dust (reddish orange). The pictures illustrate that a blast of light from Cassiopeia A is waltzing outward through the dusty skies. This dance, called an “infrared echo,” began when the remnant erupted about 50 years ago. Cassiopeia A is the remnant of a once massive star that died in a violent supernova explosion 325 years ago. It consists of a dead star, called a neutron star, and a surrounding shell of material that was blasted off as the star died. This remnant is located 10,000 light-years away in the northern constellation Cassiopeia. Infrared echoes are created when a star explodes or erupts, flashing light into surrounding clumps of dust. As the light zips through the dust clumps, it heats them up, causing them to glow successively in infrared, like a chain of Christmas bulbs lighting up one by one. The result is an optical illusion, in which the dust appears to be flying outward at the speed of light. Echoes are distinct from supernova shockwaves, which are made up material that is swept up and hurled outward by exploding stars. This infrared echo is the largest ever seen, stretching more than 50 light-years away from Cassiopeia A. If viewed from Earth, the entire movie frame would take up the same amount of space as two full moons. Hints of an older infrared echo from Cassiopeia A’s supernova explosion hundreds of years ago can also be seen. The top Spitzer image was taken on November 30, 2003, and the bottom, on December 2, 2004. Image: NASA/JPL-Caltech/O. Krause (Steward Observatory)

In 2015, Harvard-Smithsonian and Dartmouth College astronomers created an interactive 3D map of the remnant’s interior and discovered that it was composed of about a half dozen bubble-like cavities. The large, massive cavities appear as a Swiss cheese-like structure and are associated with the rings of debris that form the bright outer shell of Cassiopeia A. The two most well defined of these bubbles are 3 and 6 light years across.

Cassiopeia A is a remnant of a Type IIb supernova, one caused by an internal collapse of a massive star. Infrared observations with the Spitzer Space Telescope showed that the spectrum of the remnant indicated a supernova of this type. The progenitor star was likely a red supergiant with a helium core that had lost most of its hydrogen envelope.

Calculations using the observed expansion rate of the remnant pointed to 1667 as the year the light from the supernova explosion first reached Earth. However, observations with the Hubble Space Telescope have revealed that remnants were not expanding in a uniform manner, with the highest velocities observed in two opposing jets.  The light from the progenitor supernova of Cassiopeia A is believed to have first reached Earth at some point between 1662 and 1700. 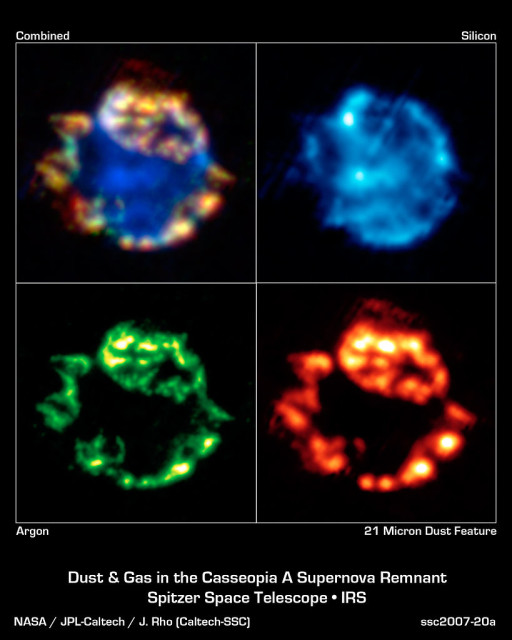 These beautiful bulbs might look like they belong on Christmas trees, but they are actually different Spitzer Space Telescope views of the blown-out remains of a stellar explosion, or supernova. Called Cassiopeia A, this supernova remnant is located about 10,000 light-years away in our own Milky Way galaxy. The upper left panel is a composite made up of three infrared views shown in the remaining panels. The bottom left view shows argon gas (green) that was synthesized as it was ejected from the star. The bottom right view shows a collection of dust (red), including proto-silicates, silicate dioxide and iron oxide. The fact that these two features line up (as seen in yellow in the combined view) tells astronomers that the dust, together with the gas, was created in the explosion. This is the best evidence yet that supernovae are a significant source of dust in the early universe — something that was postulated before, but not proven. Dust in our young universe is important because it eventually made its way into future stars, planets and even people. The upper right panel shows silicon gas (blue) deep in the interior of the remnant. This cooler gas, called the unshocked ejecta, was also synthesized in the supernova blast. The data for these images were taken by Spitzer’s infrared spectrograph, which splits light apart to reveal the fingerprints of molecules and elements. In total, Spitzer collected separate “spectra” at more than 1,700 positions across Cassiopeia A. Astronomers then created maps from this massive grid of data, showing the remnant in a multitude of infrared colors. Image: NASA/JPL-Caltech/J. Rho (Caltech-SSC)