Corvus constellation is located in the southern sky. Its name means “crow” or “raven” in Latin.

Corvus constellation represents Apollo’s sacred bird in Greek mythology. It was first catalogued by the Greek astronomer Ptolemy in the 2nd century.

Corvus does not contain many bright stars and deep sky objects, but it is home to a very famous pair of interacting galaxies, the Antennae Galaxies. The Antennae Galaxies show a likely future of the Milky Way and Andromeda Galaxy (M31) when the two collide.

Corvus is the 70th constellation in size, occupying an area of 184 square degrees. It is located in the third quadrant of the southern hemisphere (SQ3) and can be seen from latitudes between +60° and -90°. The neighboring constellations are Crater, Hydra, and Virgo.

Corvus has one star with known planets and contains no Messier objects. The brightest star in the constellation is Gienah, Gamma Corvi, with an apparent magnitude of 2.59. There is one meteor shower associated with the constellation; the Corvids.

The constellation Corvus represents the raven (or crow), Apollo’s sacred bird in Greek mythology. According to the myth, the raven originally had white feathers. In one story, Apollo told the bird to watch over Coronis, one of his lovers, who was pregnant at the time.

Coronis gradually lost interest in Apollo and fell in love with a mortal man, Ischys. When the raven reported the affair to Apollo, the god was so enraged that the bird did nothing to stop it that he flung a curse on it, scorching the raven’s feathers. That, the legend goes, is why all ravens are black. Apollo then sent his sister Artemis to kill Coronis. Before Coronis’ body was burned, the unborn child, Asclepius, was cut out of her womb and given to the centaur Chiron, who raised him. Asclepius grew up to be a famous healer and is represented by the constellation Ophiuchus, the serpent bearer.

The Greek Corvus was borrowed from the mythical Babylonian raven, MUL.UGA.MUSHEN, which was usually depicted perched on the tail of a serpent. Babylonians associated the constellation with Adad, the god of rain and storm, because its stars would rise before the rainy season, in the fall, in the second millennium.

Gamma Corvi is the brightest star in Corvus. It has an apparent magnitude of 2.59 and is approximately 165 light years distant. It is suspected to be a binary star.

Its traditional name, Gienah, which the star shares with Epsilon Cygni, comes from the Arabic phrase al-janāħ al-ghirāb al-yaman, which means “the right wing of the crow.”

Gamma Corvi is a giant belonging to the spectral class B8III.

Beta Corvi, or Kraz, is a yellow-white G-type bright giant 140 light years distant from Earth. The star’s visual magnitude varies between 2.60 and 2.66. Beta Corvi is the second brightest star in Corvus. Its proper name, Kraz, was assigned to it in modern times, but the origin of the name is uncertain. Beta Corvi has a luminosity 160 times that of the Sun.

Delta Corvi, also known as Algorab, is a class A0 star in Corvus, approximately 87 light years distant from the solar system. It has an apparent magnitude of 3.1. The star’s traditional name comes from the Arabic word al-ghuraab, which means “the crow.”

Epsilon Corvi is a K2 III class star with a visual magnitude of 3.02. It is approximately 303 light years distant. The star’s traditional name, Minkar, comes from the Arabic word almánxar, which means “the nostril of the crow.”

Alpha Corvi is only the fifth brightest star in the constellation. It has a visual magnitude of 4.02. It is the third faintest star with the Alpha designation in the sky, brighter only than Alkes (Alpha Crateris) and Alfecca Meridiana (Alpha Coronae Australis).

Alchiba is a class F0 dwarf or subdwarf only 48.2 light years distant. It is four times more luminous than our Sun. The star’s traditional name is derived from the Arabic al hibaa, which means “tent.” Alpha Corvi is another suspected binary star.

Eta Corvi, the sixth brightest star in Corvus, is a main sequence star, a hydrogen fusing dwarf, belonging to the spectral type F2 V. It is slightly more massive and a bit younger than the Sun. It has an apparent magnitude of 4.31 and is approximately 59.4 light years distant.

Eta Corvi is similar to Vega, the brightest star in the constellation Lyra, in that it has a debris disk in its orbit. In fact, it has two. The star emits an excess of infrared radiation, significantly more than what is usually observed in an object belonging to this class.

VV Corvi is a close double star composed of two stars that orbit each other with a period of 1.46 days. The system is approximately 280 light years distant. The binary also has a tertiary companion, discovered only in the last decade.

The Antennae Galaxies are a well-known pair of interacting galaxies in Corvus. They were first discovered by the German-born British astronomer Sir William Herschel in 1785. The galactic collision is currently in the starburst stage: the rate of star forming activity in the region is exceptionally high.

The Antennae are sometimes also known as the Ring Tail. 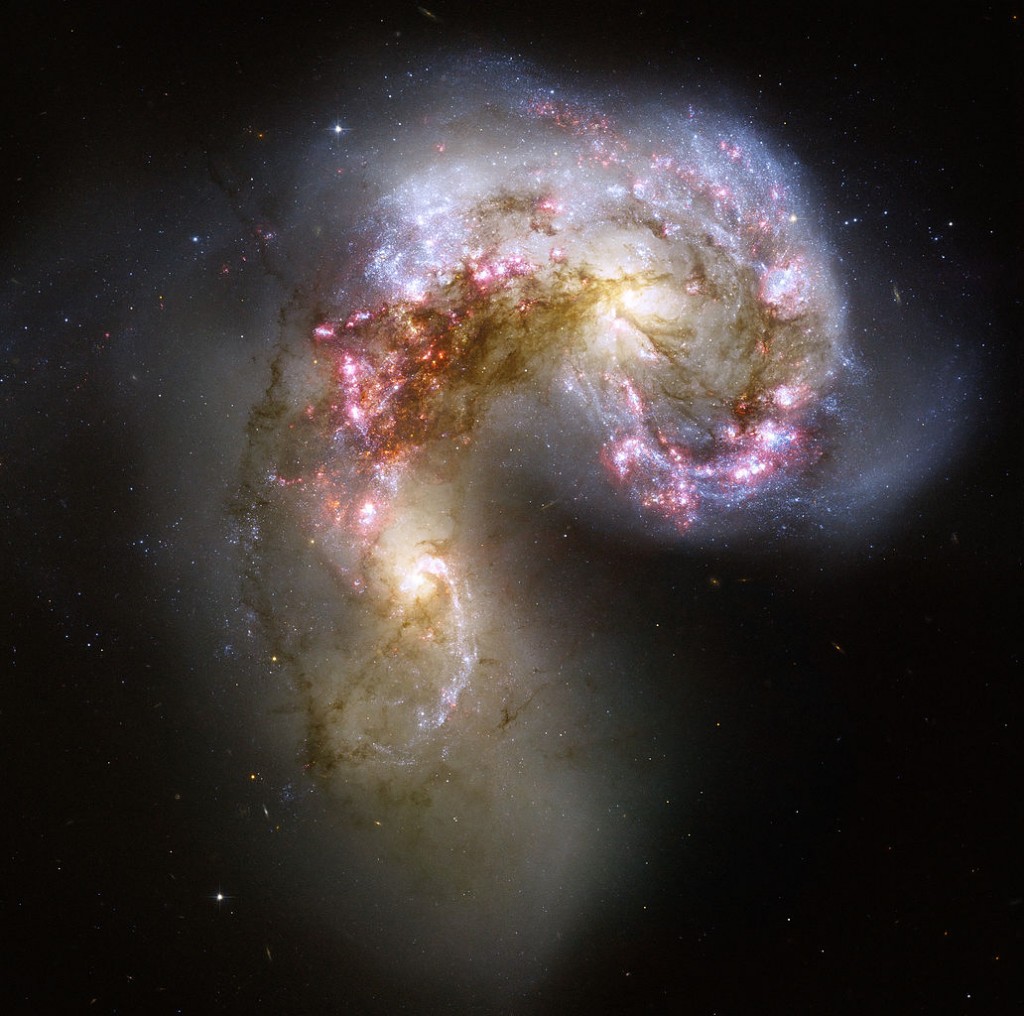 The Antennae Galaxies belong to the NGC 4038 group, a group of galaxies that consists of between 13 and 27 members located in the constellations Corvus and Crater.

The colliding galaxies got named the Antennae because their shape resembles that of an insect’s antennae. They have two long tails comprised of gas, dust and stars ejected from their main bodies as a result of the interaction.

The Antennae Galaxies have an apparent magnitude of 11.2/11.1 and are 45 million light years distant from Earth.

Two supernovae have been observed in the galaxies in recent years: SN 2004GT and SN 2007 sr.

They started ejecting stars some 300 million years ago and now the streams of ejected stars have grown so large that they appear as the antennae, an extension of the colliding pair.

The nuclei of the two galaxies are expected to merge into a single core within the next 400 million years, and the pair will eventually most likely settle into the form of an elliptical galaxy.

NGC 4027 is a barred spiral galaxy in Corvus. It has a visual magnitude of 11.7 and is about 83 million light years distant from the solar system.

The galaxy is a peculiar one: one of its spiral arms extends further outwards than the other, possibly as a result of a past collision with another galaxy.

NGC 4027 is also a member of the NGC 4038 group of galaxies. It is located less than a degree southwest of the Antennae Galaxies.

NGC 4361 is a large planetary nebula located in the centre of the constellation. Its shape is similar to that of a dim elliptical galaxy.

The nebula is about 50’’ in diameter and surrounds a 13th magnitude star.