Lynx constellation is located in the northern hemisphere. It represents the lynx, and it is not usually associated with any myths.

Lynx is one of the several constellations that were introduced by the Polish astronomer Johannes Hevelius in the 17th century.

Hevelius created the constellation to fill a relatively large gap between the two neighboring constellations, Auriga and Ursa Major. He named it Lynx because it was pretty faint and it took the eyesight of a lynx to see it. Other than Alpha Lyncis, the constellation does not contain any stars brighter than fourth magnitude.

Lynx is the 28th constellation in size, occupying an area of 545 square degrees. It lies in the second quadrant of the northern hemisphere (NQ2) and can be seen at latitudes between +90° and -55°. The neighboring constellations are Auriga, Camelopardalis, Cancer, Gemini, Leo, Leo Minor and Ursa Major.

Lynx contains five stars with known planets and has no Messier objects. The brightest star in the constellation is Alpha Lyncis, with an apparent magnitude of 3.13. There are no meteor showers associated with the constellation.

Hevelius named the constellation after the lynx because it is a relatively faint one. He wrote in his Prodromus astronomiae that only those who have the sight of a lynx can see it. The book is an unfinished work published by Hevelius’ wife around 1690, a few years after his death. In the accompanying star catalogue, Hevelius called the constellation “Lynx, sive Tigris” – Lynx or Tiger.

While it is not known if Hevelius had any myths in mind when he named the constellation, there is a figure in mythology that might be linked to the constellation’s name. Lynceus, who sailed with Jason and the Argonauts, was said to have the keenest eyesight of all men and could even see things underground. He and his twin brother Idas were part of the expedition for the Golden Fleece.

Some of the stars in Lynx were documented by the Greek astronomer Ptolemy in the 2nd century, but only as “unformed” stars near Ursa Major, and not as part of any constellation.

Alpha Lyncis has an apparent magnitude of 3.13 and is about 203 light years distant from the solar system. It belongs to the spectral class K7 III, which means that it is an orange giant that has moved past the main sequence stage and exhausted the hydrogen at its core.

The star has a radius 55 times solar and is about 673 times more luminous than the Sun.

Alsciaukat is the only star in Lynx that has a proper name. It is derived from the Arabic word aš-šawkat which means “thorn.” The star is also sometimes also called Mabsuthat, from the Arabic al-mabsūtah for “the outstretched (paw).”

The star is very similar to Alpha Lyncis in radius and mass. Both stars have roughly two solar masses and are about 1.4 billion years old. Like Alpha Lyncis, Alsciaukat is an orange giant, one belonging to the spectral class K4.5 III.

31 Lyncis is also variable star and is sometimes known as BN Lyncis. Its brightness only varies slightly, by 0.05 magnitudes, but this indicates that the star will eventually turn into a long-period variable similar to Mira (Omicron Ceti) in the Cetus constellation.

Alsciaukat is the fourth brightest star in Lynx. It has a visual magnitude of 4.25 and is approximately 389 light years distant.

38 Lyncis is the second brightest star in the constellation. It has a visual magnitude of 3.82 and is approximately 122 light years distant. It belongs to the spectral class A1V.

38 Lyncis is in fact a binary star composed of a close pair separated by only 2.6 arc seconds. The brighter component is a class A3 hydrogen fusing dwarf that has a sixth magnitude star, either a class A4 or A6 dwarf, for a companion. The primary component in the system is 31 times more luminous than the Sun. It is a rapid rotator, with a speed of over 190 km/s at the equator, and it completes a rotation in less than 15 hours.

12 Lyncis is a star of the spectral type A3V. It has an apparent magnitude of 4.86 and is approximately 229 light years distant. It is really a triple star system, with the second component 1.7” away from the primary and orbiting it with a period of 699 years, and the third component separated by 8.7” from the primary.

19 Lyncis is a binary star with a visual magnitude of 5.80. The primary component in the system is a B8V class star 468 light years distant, and the companion belongs to the spectral class K5III and is approximately 1148 light years distant from the Sun.

6 Lyncis is a subgiant of the spectral type K0IV 15 times brighter than the Sun. It has an apparent magnitude of 5.88 and is about 182 light years distant. A planet with at least 2.4 Jupiter masses was discovered in the star’s orbit in July 2008. It orbits the star with a period of 899 days.

HD 75898 is a yellow subgiant star belonging to the spectral type G0IV. It has a visual magnitude of 8.04 and is 262.82 light years distant from the Sun. The star’s estimated age is only 3.8 billion years. HD 75898 is 28% more massive and 60% larger than the Sun, and has three times the solar luminosity. A planet was discovered orbiting the star in January 2007. It has an orbital period of about 418.2 days.

NGC 2419, also known as the Intergalactic Tramp or Intergalactic Wanderer, is a globular star cluster with a visual magnitude of 9.06. It is a Shapley class II cluster, which means that it is highly concentrated at the centre.

The cluster got its nickname because it was originally believed not to be in orbit around the Milky Way. This has been proven false since: NGC 2419 takes about three billion years to complete an orbit around our galaxy. It is 300,000 light years distant from the galactic centre and about 275,000 light years from the solar system. It is one of the most remote globular clusters, both from the galactic centre and from the Sun, almost twice as distant as the Large Magellanic Cloud in the constellation Dorado.

The cluster was discovered by the German-born British astronomer William Herschel on December 31, 1788.

NGC 2419 was originally believed to be a star. It was the American astronomer Carl Lampland who discovered that it was really a globular cluster of stars.

NGC 2683 is an unbarred spiral galaxy in Lynx. It appears nearly edge-on when observed from Earth. The galaxy has a visual magnitude of 10.6 and is about 25 million light years distant. 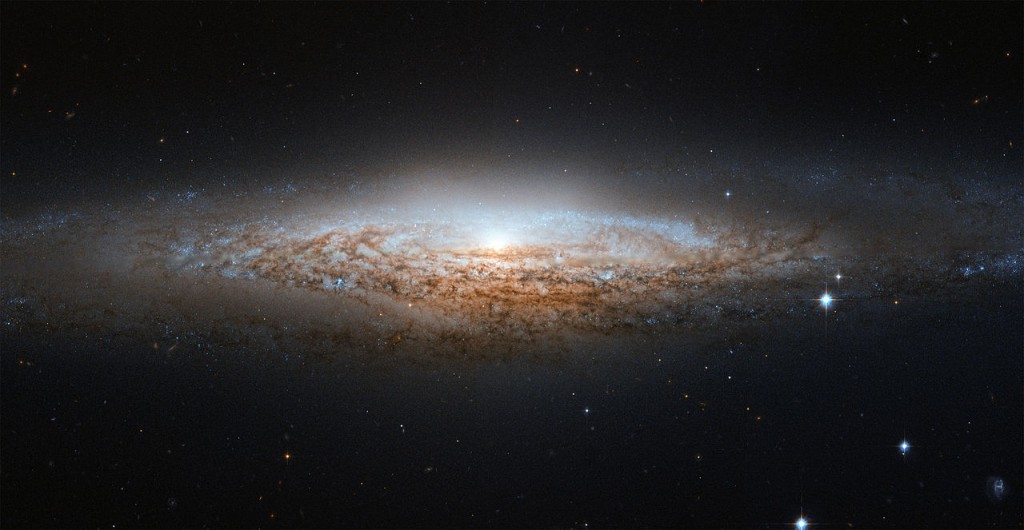 The NASA Hubble Space Telescope has spotted the “UFO Galaxy.” NGC 2683 is a spiral galaxy seen almost edge-on, giving it the shape of a classic science fiction spaceship. Image: NASA

The Astronaut Memorial Planetarium and Observatory site gave it the nickname the ‘UFO galaxy.’

The galaxy was discovered by William Herschel in February 1788. It is moving away from Earth at the speed of 410 km/s and from the galactic centre at 375 km/s.

NGC 2537 is classified as a blue compact dwarf galaxy (BCD galaxy), which means that it is a small galaxy that contains large clusters of hot young stars which make the galaxy appear blue in colour.

The galaxy has a visual magnitude of 12.3.

NGC 2770 is a spiral galaxy in Lynx. It has an apparent magnitude of 12.0 and is 88 million light years distant.

The galaxy has been nicknamed the ‘Supernova Factory’ because three supernova events have been observed in it in recent years: SN 1999eh, SN 2007uy and SN 2008D. SN 2008D is notable for being the first supernova to first be detected by the x-rays emitted early in its formation and not by the light emitted later in the process.

NGC 2541 is an unbarred spiral galaxy with a visual magnitude of 12.3, approximately 41 million light years from the Sun.

It belongs to the NGC 2841 group, a group of galaxies located in the constellations Lynx and Ursa Major.