The Big Dipper is one of the most easily recognizable asterisms in the night sky, found in the constellation Ursa Major, the Great Bear.

The Big Dipper is well-known in many cultures and goes by many names, among them the Plough, the Great Wagon, Saptarishi, and the Saucepan. The asterism is particularly prominent in the northern sky in the summer, and is one of the first star patterns we learn to identify.

Ursa Major constellation covers a much larger area of the sky than the Big Dipper, but the stars marking the bear’s head, torso, legs and feet are not as bright or as easy to see as the seven stars marking its tail and hindquarters.

The stars that form the Big Dipper are the seven brightest stars in Ursa Major: Alioth, Dubhe, Merak, Alkaid, Phecda, Megrez, and Mizar.

Alkaid, or Benetnash, (from the Arabic qā’id bināt na’sh, or “the leader of the daughters of the bier”) is one of the hottest stars that can be seen with the naked eye.

Alkaid is a young blue main sequence star belonging to the stellar class B3V. It has an apparent magnitude of 1.85 and is about 101 light years distant from Earth. It is the third brightest star in Ursa Major and the 35th brightest star in the sky. It is six times more massive than the Sun and 700 times more luminous.

Mizar (from the Arabic mīzar, or “girdle”) consists of two double stars. It was the first double star to be photographed, in 1857. It is the middle star in the Big Dipper’s handle. Mizar has an apparent magnitude of 2.23 and is 82.8 light years distant. 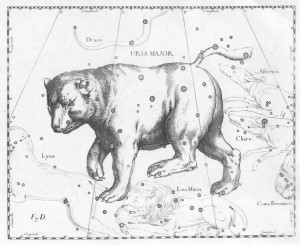 Ursa Major constellation from Uranographia by Johannes Hevelius – the view is mirrored following the tradition of celestial globes, showing the celestial sphere in a view from “outside”. Scan: Torsten Bronger

Alioth (from the Arabic alyat, “fat tail of a sheep”) is the star in Ursa Major’s tail which is the closest to the bear’s body. It has a visual magnitude of 1.76 and is about 81 light years distant from Earth. It has the stellar classification of A0pCr.

Alioth is a peculiar star, one that shows variations in its spectral lines over a period of 5.1 days. It is the brightest of the seven stars in the asterism.

Megrez (from the Arabic al-maghriz, “the base,” referring to the base of the Big Bear’s tail), is the dimmest of the seven stars. It has an apparent magnitude of 3.312 and is 58.4 light years distant from earth. Megrez is a white main sequence dwarf. It has the stellar classification of A3V. The star has 63 percent more mass than the Sun and 14 solar luminosities.

Phecda, or Phad (from the Arabic fakhð ad-dubb, “the thigh of the bear”), has the stellar classification A0Ve, which makes it another white main sequence dwarf. It has an apparent magnitude of 2.438 and is 83.2 light years distant from Earth.

Dubhe (from the Arabic dubb, meaning “bear,” abbreviated from the phrase żahr ad-dubb al-akbar, which means “the back of the Greater Bear”) has a visual magnitude of 1.79 and is about 123 light years distant from Earth. It is the second brightest star in the constellation.

Dubhe is an orange giant with the stellar classification of K1II-III. It is a spectroscopic binary star, with a companion belonging to the stellar class F0V, a yellow-white main sequence star. The two stars are 23 astronomical units apart and have an orbital period of 44.4 years.

Merak (from the Arabic al-maraqq, “the loins”) is a white main sequence star of the spectral type A1V. It has an apparent magnitude of 2.37 and is 79.7 light years distant from Earth. It is a suspected variable star with a mass 2.7 times that of the Sun and 68 solar luminosities.

Ursa Major lies in the second quadrant of the northern hemisphere (NQ2), which makes it visible at latitudes between +90° and -30°. It is best seen in the evenings in April.

The Big Dipper is circumpolar in most of the northern hemisphere, which means that it does not sink below the horizon at night. As a result of the Earth’s rotation, Ursa Major appears to rotate slowly counterclockwise at night around the north celestial pole.

A picture of the Big Dipper taken 2007/08/23 from the Kalalau Valley lookout at Koke’e State Park in Hawaii, credit: Gh5046 at wikipedia.org

The Big Dipper can be found in different parts of the sky at different times of year. In spring and summer, the Big and Little Dippers are higher overhead, and in autumn and winter, they are closer to the horizon. The rule is, spring up and fall down.

The appearance of the Big Dipper changes from season to season. In autumn, it rests on the horizon in the evening. In winter evenings, the handle appears to be dangling from the bowl. In spring, it is upside down in the evening hours, and in summer the bowl leans toward the ground.

The Big Dipper is located in the region of the sky that contains several famous deep sky objects, including the Whirlpool Galaxy (Messier 51), located under the Big Dipper’s handle in Canes Venatici constellation, and the Pinwheel Galaxy (Messier 101) in Ursa Major, which can be found with binoculars or small telescopes. Other notable deep sky objects in the area include the double star Messier 40 (Winnecke 4), the spiral galaxy Messier 81 (Bode’s Galaxy), the irregular galaxy Messier 82 (Cigar Galaxy), the planetary nebula Messier 97 (Owl Nebula), and spiral galaxies Messier 108 and Messier 109. 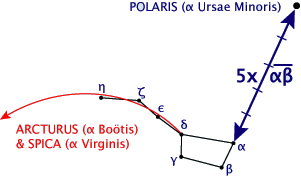 The line from Megrez to Dubhe points the way to Capella in Auriga constellation, and one drawn from Megrez to Merak leads to Castor in Gemini when extended by about five times the distance between the two stars.

In about 50,000 years, the stars of the Big Dipper will be at different locations, which will result in the asterism changing shape and facing the opposite way. Still, as most of the stars that form the asterism (all except Alkaid and Dubhe) are members of the Ursa Major Moving Group, which means that they share common motion through space, the asterism will not look significantly different. The pattern will be present even 100,000 years from now, but the shape of the handle, with Alkaid marking the tip, and the end of the bowl marked by Dubhe, will appear slightly different.

NORTH STAR AND THE LITTLE DIPPER

Finding the Big Dipper in the night sky is the easiest way to find Polaris, the North Star, located in the constellation Ursa Minor, the Little Bear. The Big Dipper rotates around the north celestial pole, and always points the way to the North Star.

The Little Dipper, formed by the seven brightest stars in Ursa Minor constellation, lies in the vicinity of the Big Dipper, but as the stars of the Little Dipper aren’t quite as bright, especially the four located between Polaris on one end and Kochab and Pherkad on the other, the Little Dipper is not as easy to find in the sky, especially in areas polluted by light.

Since the Little Dipper is not quite as prominent in the sky as its larger neighbour, it is easier to use the stars of the Big Dipper to find both the North Star and true north. To find Polaris, follow the line from the Pointer Stars, Merak and Dubhe, to the first bright star along the same line. That is the North Star. Merak and Dubhe are the stars that mark the end of the bowl of the Big Dipper. They are called the Pointer Stars because they point the way to Polaris and true north.

Once you have located Polaris, on a clear night it is easy to find the Little Dipper asterism as Polaris is the star at the tip of its handle (or the Little Bear’s tail).

The Big Dipper is associated with a number of different myths and folk tales in cultures across the world. In Hindu astronomy, the asterism is called Sapta Rishi, or The Seven Great Sages. In eastern Asia, it is known as the Northern Dipper. The Chinese know the seven stars as the Government, or Tseih Sing. In Malaysia, the asterism is called Buruj Biduk, or The Ladle, and in Mongolia, it is known as the Seven Gods. In an Arabian story, the stars that form the bowl represent a coffin and the three stars marking the handle are mourners following it. The name of the star Alkaid (or Benetnash), located at the tip of the handle, refers to that story.

In the UK and Ireland, the asterism is known as the Plough, and sometimes as the Butcher’s Cleaver in northern parts of England. The old English name for the asterism is Charles’ Wain (wagon), which is derived from the Scandinavian Karlavagnen, Karlsvognen, or Karlsvogna. Charles or Karl was a common name in Germanic languages and the name of the asterism meant “the men’s wagon,” as opposed to the Little Dipper, which was “the women’s wagon.” An even older name for the stars of the Big Dipper was Odin’s Wain, or Odin’s Wagon, referring to Scandinavian mythology.

In Slavic languages and in Romanian, the Big and Little Dipper are known as the Great and Small Wagon, and Germans know the Big Dipper as Großer Wagen, or the Great Cart. The Romans knew the seven stars as the “seven plough oxen,” or Septentrio, with only two of the seven stars representing oxen and the others forming a wagon pulled by the oxen.

Some Native American groups saw the bowl as a bear and the three stars of the handle either as three cubs or three hunters following the bear. The second interpretation is linked to a folk tale explaining why the leaves turn red in autumn: the hunters are chasing a wounded bear and, since the asterism is low in the sky that time of year, the bear’s blood is falling on the leaves, making them turn red.

In more recent history, black slaves in the United States knew the constellation as the Drinking Gourd and used it to find their way north, to freedom. The folk song, “Follow the Drinking Gourd,” gave runaway slaves directions to follow the Big Dipper to get to north. In Africa, the seven stars were sometimes seen as a drinking gourd, which is believed to be the origin of the name the Big Dipper, most commonly used for the figuration in the U.S. and Canada.