Vulpecula constellation lies in the northern sky. Its name means “the little fox” in Latin. It is not associated with any myths.

The constellation is a relatively faint one, with no stars brighter than fourth magnitude. It lies in the middle of the Summer Triangle, an asterism formed by the bright stars Vega in the constellation Lyra, Altair in Aquila, and Deneb in Cygnus.

Notable deep sky objects in Vulpecula include the famous Dumbbell Nebula (Messier 27), which was the first planetary nebula to be discovered, the elliptical galaxy NGC 7052, and Brocchi’s Cluster. The constellation is also home to the first pulsar ever discovered, PSR B1919+21, first observed by Jocelyn Bell Burnell and Antony Hewish in 1967.

Vulpecula is the 55th constellation in size, occupying an area of 268 square degrees. It is located in the fourth quadrant of the northern hemisphere (NQ4) and can be seen at latitudes between +90° and -55°. The neighboring constellations are Cygnus, Delphinus, Hercules, Lyra, Pegasus and Sagitta.

Vulpecula contains one Messier object – Messier 27 (M27, NGC 6853, Dumbbell Nebula) – and has four stars with known planets. The brightest star in the constellation is Anser, Alpha Vulpeculae, with an apparent magnitude of 4.44. There are no meteor showers associated with the constellation.

Vulpecula constellation has not been named after a figure in mythology. It was introduced by Johannes Hevelius in 1687. Hevelius placed it near two constellations that also represent hunting animals: the eagle (Aquila) and the vulture (which the constellation Lyra used to be associated with).

Hevelius said that Vulpecula et Anser, or the little fox with the goose, represented a fox carrying a goose to Cerberus, the dog that guarded the entrance to the Underworld in Greek mythology. Hevelius had invented the Cerberus constellation too, but it is now obsolete.

Vulpecula and Anser were later split into two constellations, the Fox and the Goose, only to be merged again under the name Vulpecula. The brightest star in the constellation, Alpha Vulpeculae, carries the name Anser and now represents the Goose.

Anser is a red giant star with the stellar classification M0III. It has an apparent magnitude of 4.44 and is approximately 297 light years distant from the Sun. It is the brightest star in Vulpecula. It is sometimes also known as Lucida Anseris or Lukida.

Alpha Vulpeculae forms a wide optical binary with the star 8 Vulpeculae, an orange giant of the spectral type K0III, about 484 light years distant from Earth. 8 Vulpeculae has an apparent magnitude of 5.81.

23 Vulpeculae is the second brightest star in Vulpecula constellation. It has an apparent magnitude of 4.52 and is approximately 328 light years distant. It is a star in a binary system. It belongs to the spectral class K3III.

31 Vulpeculae is the third brightest star in the constellation. It has a visual magnitude of 4.59 and is 216.57 light years distant from the Sun. It is a variable star. It has the stellar classification G8III.

HD 189733 is a binary star located 0.3 degrees east of Messier 27 (the Dumbbell Nebula). The primary component is believed to be an orange dwarf with the stellar classification K1.5V, and the other star is a red dwarf. The stars have an apparent magnitude of 6.07 and 10.116 and have an orbital period of about 3,200 years. The system can easily be found with binoculars.

The primary star is smaller and much less luminous than the Sun. It has 82% the solar mass, 75% the radius, and only 26.4% the luminosity. It is believed to be over 600 million years old. HD 189733 is classified as a BY Draconis variable, which means that it exhibits variations in luminosity as a result of rotation of the star coupled with star spots. The starspots affect the star’s luminosity by 1.5 percent in visible light.

In October 2005, an extrasolar planet, HD 189733 b, was confirmed to be orbiting the primary star. It is a hot Jupiter class planet with a close orbit to the orange dwarf. It was the first extrasolar planet to be discovered with carbon dioxide in its atmosphere.

PSR B1919+21 was the first pulsar ever discovered. The name PSR B1919+21 comes from the word “pulsar” and the declination and right ascension at which it is located. British astrophysicist Jocelyn Bell Burnell and her thesis supervisor Antony Hewish discovered the pulsar in 1967, and Hewish shared the Nobel Prize in Physics for the discovery. Before they figured out what the nature of the signal was, Bell and Hewish had considered the possibility that they had picked up a signal from an extra-terrestrial civilization. Astrophysicist Thomas Gold and astronomer Fred Hoyle eventually identified these signals as rapidly rotating neutron stars that had very strong magnetic fields.

English post-punk band Joy Division used an image of the pulsar’s radio pulses on the cover of their debut album Unknown Pleasures, released in June 1979.

PSR B1937+21 is the first millisecond pulsar ever discovered, located only a few degrees away from PSR B1919+21. It was discovered in 1982. The pulsar has a rotational period of 1.557708 miliseconds, which means that it completes nearly 642 rotations per second.

The Dumbbell Nebula is one of the best known planetary nebulae in the sky. It was formed when a dying star threw off its gas, and named Dumbbell because it has a double-lobed structure resembling a bar-bell. It is also sometimes called the Apple Core Nebula.

Messier 27 was the first planetary nebula ever discovered. Charles Messier first observed it in 1764.

The nebula has an apparent magnitude of 7.5 and is approximately 1,360 light years distant from the solar system. It is about 8 arc minutes in diameter and can easily be observed in binoculars and amateur telescopes. The central star, a white dwarf, is larger than any other known white dwarf. 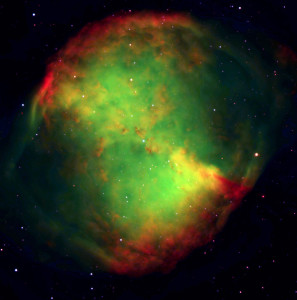 The Dumbbell Nebula — also known as Messier 27 or NGC 6853 — is a typical planetary nebula and is located in the constellation Vulpecula (The Fox). The distance is rather uncertain, but is believed to be around 1200 light-years. It was first described by the French astronomer and comet hunter Charles Messier who found it in 1764 and included it as no. 27 in his famous list of extended sky objects. Despite its class, the Dumbbell Nebula has nothing to do with planets. It consists of very rarified gas that has been ejected from the hot central star now in one of its last evolutionary stages. Image: ESO

NGC 7052 is an elliptical galaxy in Vulpecula. It has an apparent magnitude of 13.4 and is approximately 191 million light years distant. The galaxy is a known radio source.

The galaxy has a dust disk that is 3,700 light years in diameter and believed to have formed in a galaxy collision a long time ago.

In the next several billion years, the disk will be swallowed by the galaxy’s black hole, which is 100 times more massive than the disk itself.

NGC 6820 is an emission nebula in Vulpecula. It surrounds the open cluster NGC 6823, located near Messier 27. The cluster is about 50 light years across and lies about 6,000 light years from Earth.

The center of NGC 6823 is believed to be two million years old and contains many young blue stars. The outer parts of the cluster that appear next to the pillars of the nebula are home to even younger stars.

The cluster lies near the Dumbbell Nebula and surrounds a star that belongs to the spectral class O or B and can be seen without binoculars.

Brocchi’s Cluster is a group of stars located near the border with Sagitta constellation. The brighter stars in the cluster form the Coathanger, a well-known asterism in Vulpecula. 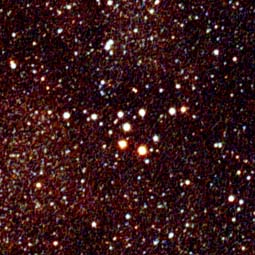 Brocchi’s Cluster is also known as Al Sufi’s Cluster, after the Persian astronomer Al Sufi who discovered it and described it in his Book of Fixed Stars in 964.

The Italian astronomer Giovanni Batista Hodierna independently discovered the cluster in the 17th century, and Brocchi, who was an amateur astronomer and chart maker, created a map of the cluster for use in calibrating photometers. The Swedish astronomer Per Collinder included it in his catalogue of open clusters in 1931.

The Coathanger is an asterism formed by the 10 brightest stars in Brocchi’s Cluster. It appears as a patch of light to the unaided eye and can easily be seen in binoculars.