The Great Square of Pegasus is an asterism formed by three bright stars in Pegasus constellation – Markab, Scheat and Algenib – and Alpheratz in the neighbouring constellation Andromeda. For northern observers, the asterism is particularly prominent in the summer months, when it can be seen high overhead in the evening.

The Great Square represents Pegasus’ main body. It is one of the several most recognizable northern asterisms, along with the Summer Triangle, Cassiopeia’s W, the Keystone in Hercules, the Water Jar in Aquarius, the Northern Cross in Cygnus, and the Circlet of Pisces in Pisces. 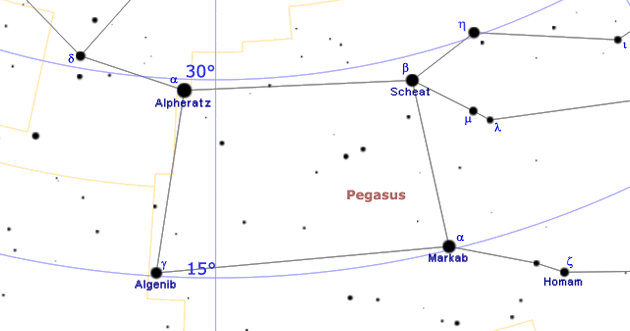 The asterism can be used to find several notable deep sky objects, including the famous Andromeda Galaxy (M31), the Triangulum Galaxy (M33) and the Great Pegasus Cluster (M15).

The star 51 Pegasi, also known by the name Helvetios, can be seen right next to the Great Square, about halfway between Scheat and Markab. It was the first ever main sequence star known to have a planet in its orbit. The first extrasolar planet, nicknamed Bellerophon and designated 51 Pegasi b, was detected in 1995 and later named Dimidium.

The four stars that form the Great Square of Pegasus are all second magnitude and appear similar in brightness.

Alpheratz, Alpha Andromedae, is the brightest of the four, with an apparent magnitude of 2.06. The star is also known by the name Sirrah. It is 97 light years distant from the Sun and marks the northeastern (upper left) corner of the Great Square.

Alpheratz is really a binary system composed of two stars closely orbiting each other with a period of 96.7 days. The brighter component is the brightest mercury-manganese star known. It contains abnormally high levels of manganese, mercury, gallium, xenon and other elements. The star has the spectral classification B8IVpMnHg. The secondary component is a main sequence star of the spectral type A3V. 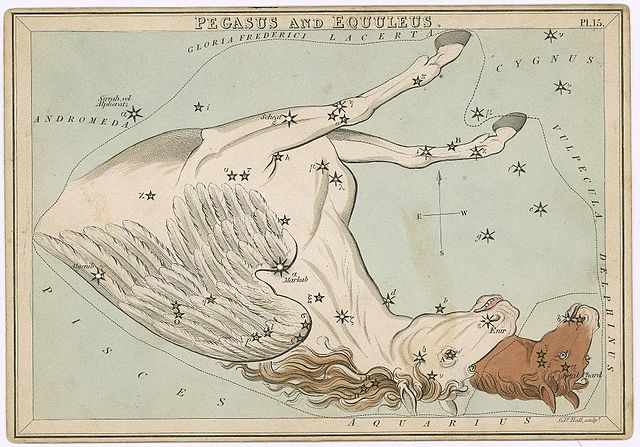 “Pegasus and Equuleus”, plate 15 in Urania’s Mirror, a set of celestial cards accompanied by A familiar treatise on astronomy… by Jehoshaphat Aspin.

Scheat, Beta Pegasi, is a red giant with the stellar classification M2.5 II–IIIe. It has a mean apparent magnitude of 2.42 and lies at a distance of 196 light years from Earth. The star marks the northwest (upper right) corner of the asterism. It is 95 times larger than the Sun and 1,500 times more luminous.

Scheat is classified as a semi-regular variable. Its brightness varies from magnitude 2.31 to 2.74 over a period of 43.3 days.  The star has an absolute magnitude of -1.49.  Its traditional name was derived from the Arabic Al Sā’id, which means “the upper arm.”

Markab, Alpha Pegasi, is a subgiant star of the spectral type A0 IV. It sits at the southwest corner of the Great Square. It has an apparent magnitude of 2.48 and lies at a distance of 133 light years from the Sun. The star has evolved beyond the main sequence and expanded to almost five times the Sun’s radius. It is a very fast rotator, with a projected rotational velocity of 125 km/s.

The name Markab means “the saddle of the horse” in Arabic. It may be a mistranscription of the word Mankib, derived from the Arabic phrase Mankib al-Faras, meaning “the shoulder of the horse.”

Algenib, Gamma Pegasi, marks the southeast corner of the Great Square of Pegasus. It has an apparent magnitude of 2.84 and is about 390 light years distant from the Sun. The star is a subgiant with the stellar classification B2 IV. It is classified as a Beta Cephei variable and exhibits small rapid variations in brightness as a result of pulsations of its surface. Algenib’s brightness varies from magnitude 2.78 to 2.89 with a pulsation period of 3.642 hours. The star also exhibits slow pulsations every 1.47 days.

Several famous deep sky objects can be found using the asterism. The Andromeda Galaxy (Messier 31) can be found between the Great Square and Cassiopeia’s W asterism. Several bright stars in Andromeda form a chain that begins with Alpheratz at the northern corner of the Great Square and then leads to Mirach and Almach in the direction of Perseus, just under Cassiopeia’s W. The Andromeda Galaxy is located about 8 degrees northwest of Mirach, the middle star in the chain. 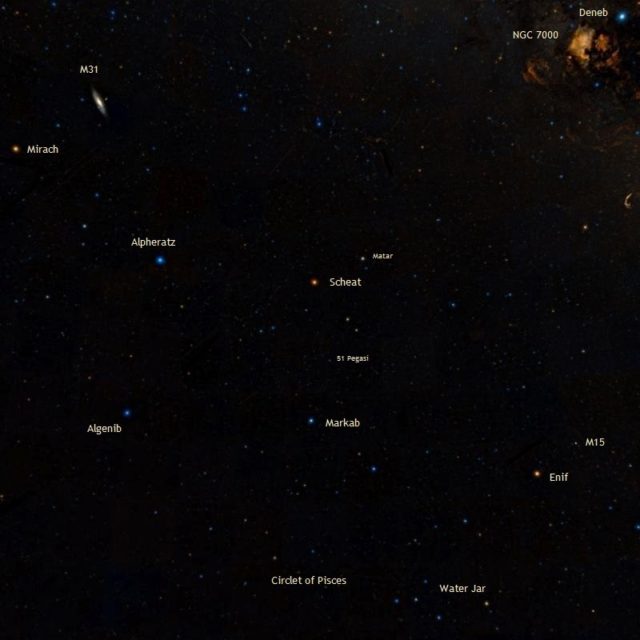 Andromeda, the closest large galaxy to the Milky Way, is one of the brightest galaxies in the sky and one of the most distant objects that can be seen without binoculars. It will collide with our galaxy in about 4.5 billion years and the collision will produce a single new galaxy. The bright spiral galaxy has an apparent magnitude of 3.44 and lies at a distance of 2.54 million light years. With an apparent size of 3.167° by 1°, the galaxy appears like a nebulous smear to the naked eye on moonless nights. In binoculars, it looks like a small oval cloud.

The Triangulum Galaxy (Messier 33) can also be found using Mirach. It is located about 7 degrees southwest of the star, in the direction opposite to the Andromeda Galaxy. The spiral galaxy has an apparent magnitude of 5.72 and is located at an approximate distance of 3 million light years from Earth. It occupies an area of 70.8’ by 41.7’. Despite its brightness and size, the galaxy is diffuse and has a low surface brightness, which makes it difficult to observe in less than ideal viewing conditions. 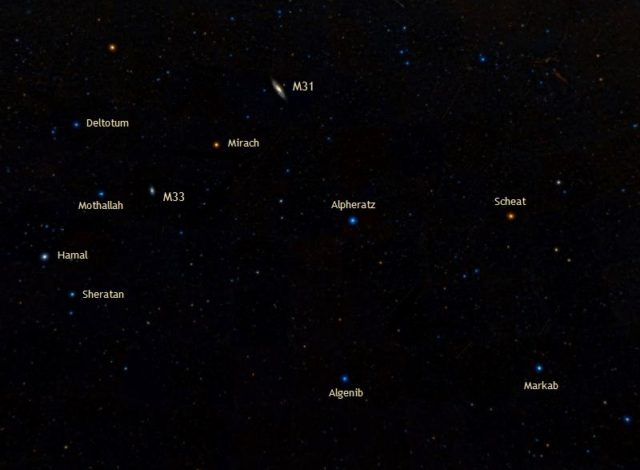 The Great Pegasus Cluster (Messier 15) can be seen 3 ½ degrees west and 2 ¼ north of Enif, the brightest star in Pegasus. Enif can be found quite easily, as it is the brightest star outside the Great Square, near Markab. M15 is located along the line from Enif to the constellation Delphinus, easily recognized for its kite shape.

M15 is one of the oldest known globular clusters in the Milky Way, with an estimated age of 12 billion years. It contains more than 100,000 stars. The cluster is 175 light years in diameter and occupies 18’ of the apparent sky. It has an apparent magnitude of 6.2.

NGC 7331, a bright unbarred spiral galaxy, and Stephan’s Quintet,  a group of five galaxies in Pegasus, can also be seen in the vicinity of the Great Square, but require considerably better equipment than the three Messier objects. NGC 7331 lies a little more than 4 degrees north and slightly west of Matar, Eta Pegasi, which can be found by star-hopping from Enif. Stephan’s Quintet is located only half a degree southwest of NGC 7331. 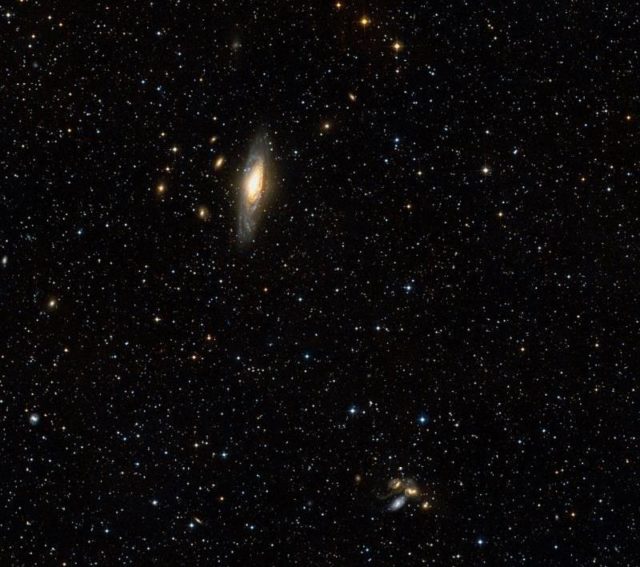 NGC 7331 has a high surface brightness and can be seen in large binoculars in good conditions. It is a spiral galaxy with an apparent magnitude of 10.4, about 50 million light years distant from the solar system. It is the brightest galaxy in the Deer Lick Group (NGC 7331 Group), a visual grouping of galaxies that appear in the same line of sight as NGC 7331 when observed from Earth. The four smaller galaxies (NGC 7335, NGC 7336, NGC 7337 and NGC 7340), nicknamed the “fleas,” lie about 10 times farther away than NGC 7331. 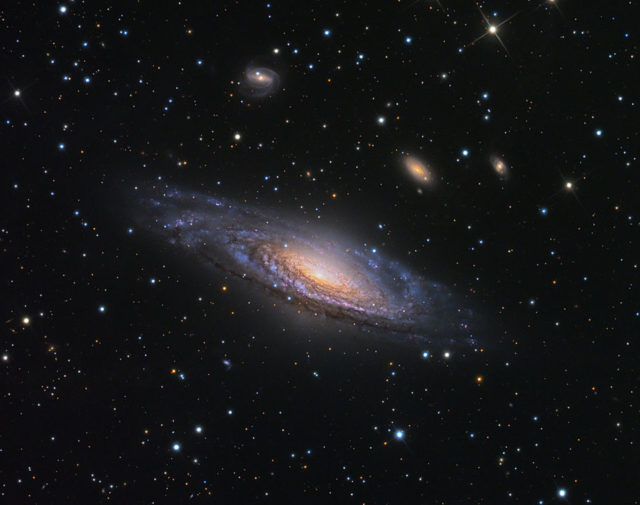 NGC 7331 is about 20 times more distant than the Andromeda Galaxy and appears much smaller, with an apparent size of 10.5’ by 3.7’, but is similarly inclined to our line of sight and resembles the larger galaxy. NGC 7331 was often called the Milky Way’s twin because it was thought to be similar in size and structure to our galaxy. (In recent decades, studies have indicated that the Milky Way is in fact a barred spiral, not an unbarred one as previously believed.) 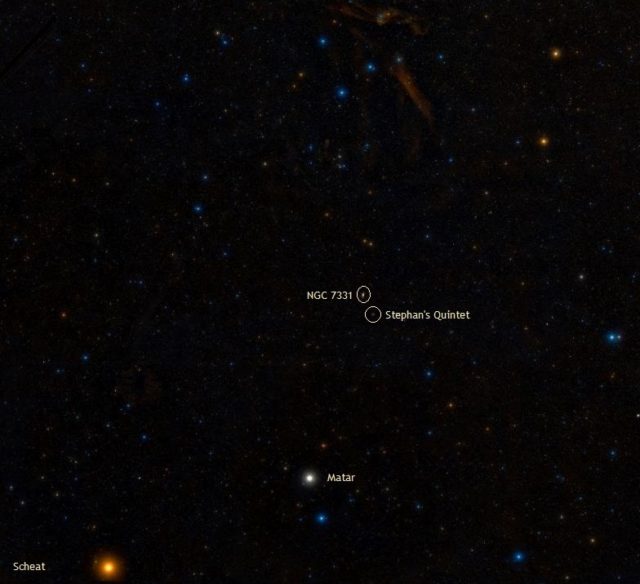 Stephan’s Quintet is a visual grouping of five galaxies, four of which are interacting and will eventually merge to form a single elliptical galaxy. The four interacting galaxies – NGC 7317, NGC 7318A, NGC 7318B and NGC 7319 – form the Hickson Compact Group 92. This was the first compact group of galaxies ever discovered. The spiral galaxy NGC 7320, which lies in the same line of sight, is 39 million light years distant, while the compact group lies much farther away, at an approximate distance of 300 million light years. 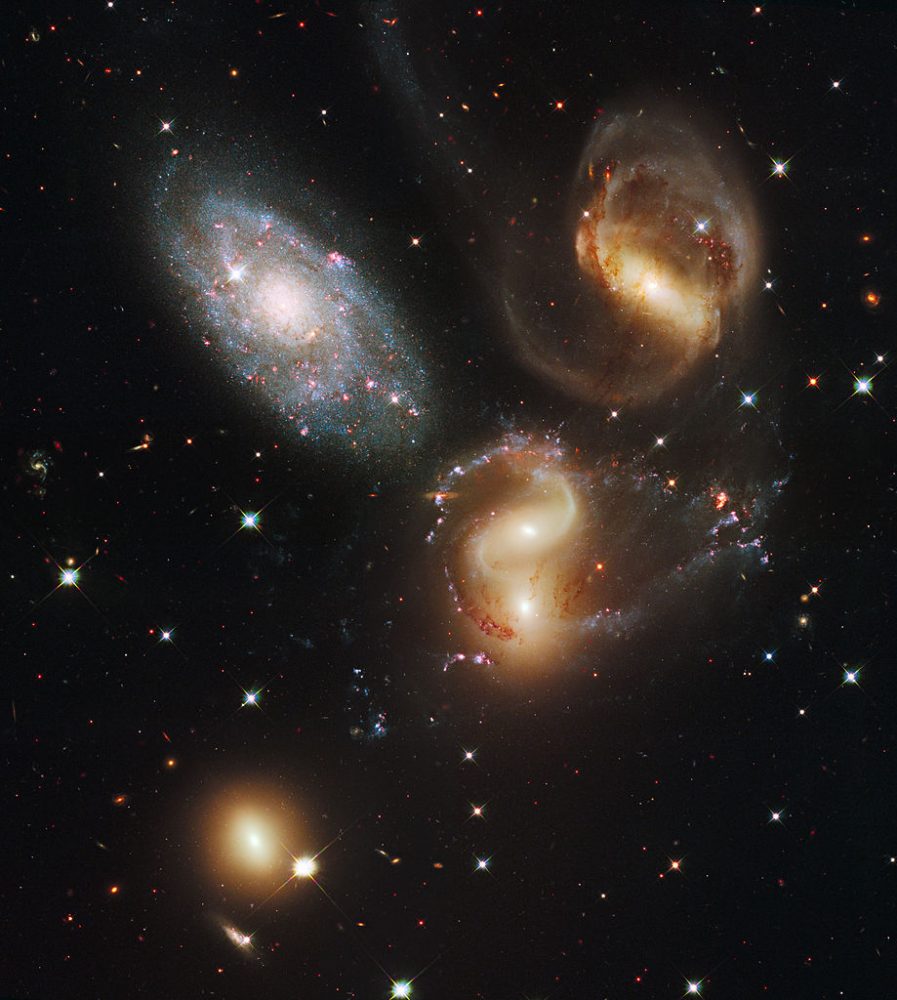 A clash among members of a famous galaxy quintet reveals an assortment of stars across a wide color range, from young, blue stars to aging, red stars. This portrait of Stephan’s Quintet, also known as Hickson Compact Group 92, was taken by the new Wide Field Camera 3 (WFC3) aboard NASA’s Hubble Space Telescope. Stephan’s Quintet, as the name implies, is a group of five galaxies. The name, however, is a bit of a misnomer. Studies have shown that group member NGC 7320, at upper left, is actually a foreground galaxy about seven times closer to Earth than the rest of the group. Three of the galaxies have distorted shapes, elongated spiral arms, and long, gaseous tidal tails containing myriad star clusters, proof of their close encounters. These interactions have sparked a frenzy of star birth in the central pair of galaxies. This drama is being played out against a rich backdrop of faraway galaxies. The image, taken in visible and near-infrared light, showcases WFC3’s broad wavelength range. The colors trace the ages of the stellar populations, showing that star birth occurred at different epochs, stretching over hundreds of millions of years. The camera’s infrared vision also peers through curtains of dust to see groupings of stars that cannot be seen in visible light. NGC 7319, at top right, is a barred spiral with distinct spiral arms that follow nearly 180 degrees back to the bar. The blue specks in the spiral arm at the top of NGC 7319 and the red dots just above and to the right of the core are clusters of many thousands of stars. Most of the quintet is too far away even for Hubble to resolve individual stars. Continuing clockwise, the next galaxy appears to have two cores, but it is actually two galaxies, NGC 7318A and NGC 7318B. Encircling the galaxies are young, bright blue star clusters and pinkish clouds of glowing hydrogen where infant stars are being born. These stars are less than 10 million years old and have not yet blown away their natal cloud. Far away from the galaxies, at right, is a patch of intergalactic space where many star clusters are forming. NGC 7317, at bottom left, is a normal-looking elliptical galaxy that is less affected by the interactions. Sharply contrasting with these galaxies is the dwarf galaxy NGC 7320 at upper left. Bursts of star formation are occurring in the galaxy’s disk, as seen by the blue and pink dots. In this galaxy, Hubble can resolve individual stars, evidence that NGC 7320 is closer to Earth. NGC 7320 is 40 million light-years from Earth. The other members of the quintet reside 290 million light-years away in the constellation Pegasus. These farther members are markedly redder than the foreground galaxy, suggesting that older stars reside in their cores. The stars’ light also may be further reddened by dust stirred up in the encounters. Image: NASA, ESA, and the Hubble SM4 ERO Team