The Keystone is an asterism formed by four relatively bright stars in the constellation Hercules: Pi, Eta, Zeta and Epsilon Herculis. The trapezoid-shaped pattern makes it easy for observers to identify the constellation and to find several well-known deep sky objects. On a clear night, the Keystone can be seen between the bright Vega, the brightest star in Lyra, and the stars of Corona Borealis, the Northern Crown. The asterism represents Hercules’ torso.

The Keystone lies between the two brightest northern stars, Vega and Arcturus. It can be found about a third of the way from Vega to Boötes’ brightest star. 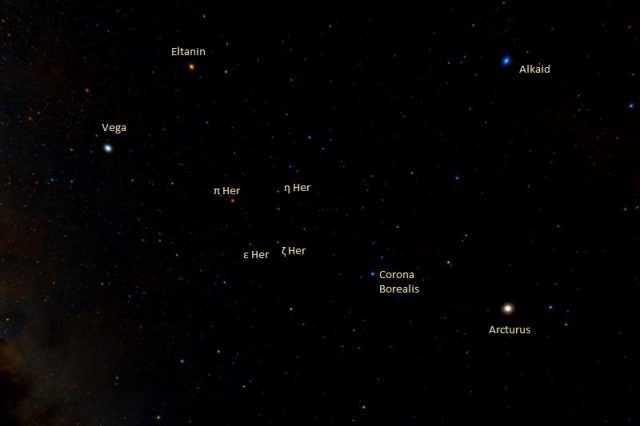 Location of the Keystone, image: Wikisky

Zeta Herculis is only 35 light years distant from the solar system. The primary component in the system is a class F subgiant with a radius 2.6 times that of the Sun and 1.45 solar masses.  It is over six times more luminous than the Sun. It is a member of the Zeta Herculis moving group, a group of stars that share a common origin and motion through space. The group also includes the stars Beta Hydri, Rho Persei, Eta Reticuli, Epsilon Octantis and Phi-1 Lupi.

Pi Herculis (π Her), the second brightest star of the Keystone and fourth brightest in Hercules, is a bright giant with the stellar classification of K3 II, which means that it appears orange in colour. The star has an apparent magnitude of 3.15 and lies at an approximate distance of 377 light years.  It has the traditional name Fudail.

Eta Herculis is the third brightest of the four stars. It has a visual magnitude of 3.487 and lies at a distance of 112 light years from Earth. It is a class G giant with a mass 2.3 times that of the Sun, a radius 9.8 times solar and luminosity 50 times that of the Sun. The star is also known by its traditional name, Sophian.

Epsilon Herculis, the faintest of the Keystone stars, is a spectroscopic binary system with a combined apparent magnitude of 3.91. Also known as Cujam or Kajam, it lies about 155 light years from Earth and has the combined spectral classification of A0 V or A0 IV.

The Keystone makes it easy to locate several notable deep sky objects. The most famous of these is the Hercules Globular Cluster (Messier 13), which lies about 2.5 degrees south of Eta Herculis, in the direction of Zeta Herculis. 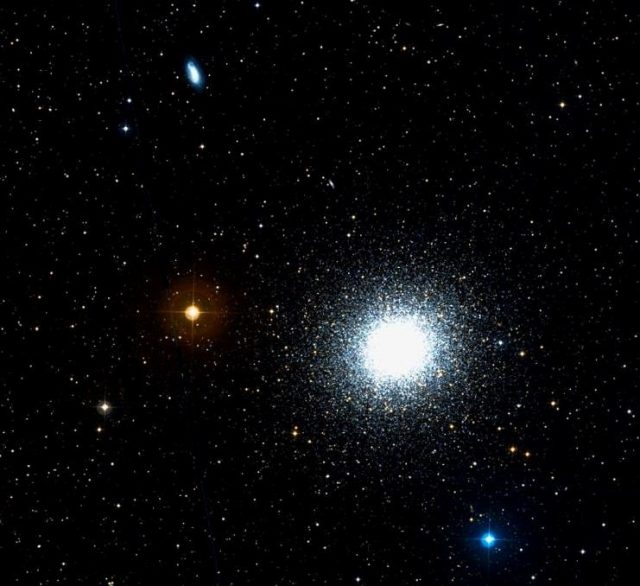 M13 is one of the brightest northern globular clusters, with an apparent magnitude of 5.8. It lies at an approximate distance of 22,200 light years from Earth and contains some 300,000 stars. The cluster’s estimated age is 11.65 billion years. On a very clear night, M13 is just barely visible without binoculars. 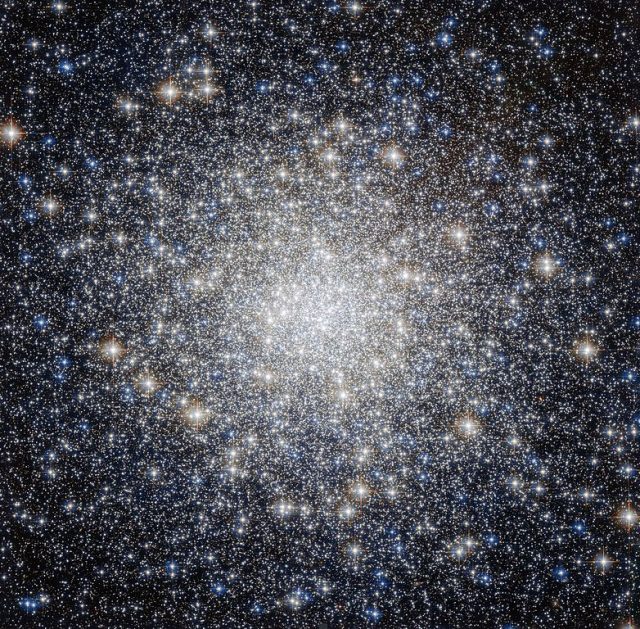 Messier 92, another bright globular cluster in the vicinity of the Keystone, has a visual magnitude of 6.3 and is some 26,700 light years distant from Earth. It lies north of the Keystone and forms a triangle with Eta and Pi Herculis. It can be seen about 60% of the way from Eta to Iota Herculis.

The barred spiral galaxy NGC 6239 lies in the same area of the sky as M92, just north of Eta Herculis. It is located at an approximate distance of 42 million light years and has an apparent magnitude of 11.27. It occupies an area 2.40’ by 1.1’ in apparent size.

NGC 6229, another globular cluster in Hercules, can be seen a little further away from NGC 6239. The cluster has a visual magnitude of 9.4 and lies at a distance of 100,000 light years.

The multipolar planetary nebula NGC 6058, which can be seen outside the Keystone, in the direction of Boötes, occupies an area of about 45 arc seconds and has a visual magnitude of 12.9. It lies at an approximate distance of 11,000 light years.

NGC 6210, another planetary nebula, lies about 4 degrees northeast of Kornephoros, the brightest star in Hercules. The nebula’s estimated distance is 6,500 light years. NGC 6210 is notable for its two sets of relatively bright bipolar jets, which give it a shape that resembles a turtle. 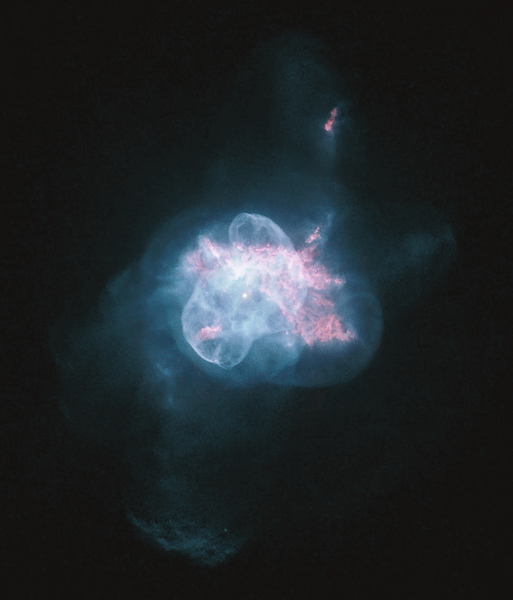