The Heart Nebula (IC 1805) is an emission nebula located at an approximate distance of 7,500 light years from Earth, in the constellation Cassiopeia. It is also known as Sharpless 2-190 (Sh2-190) or the Running Dog Nebula because, when seen through a telescope, it looks a bit like a running dog. The nebula has an apparent magnitude of 18.3 and an absolute magnitude of 6.5. It is 150 arcminutes in size and known for its intensely red glowing gas and dark dust lanes forming a shape that resembles a heart symbol.

The Heart Nebula forms a famous complex known as the Heart and Soul with its smaller neighbour Westerhout 5, also known as the Soul Nebula, which lies just 2.5 degrees to the southeast. 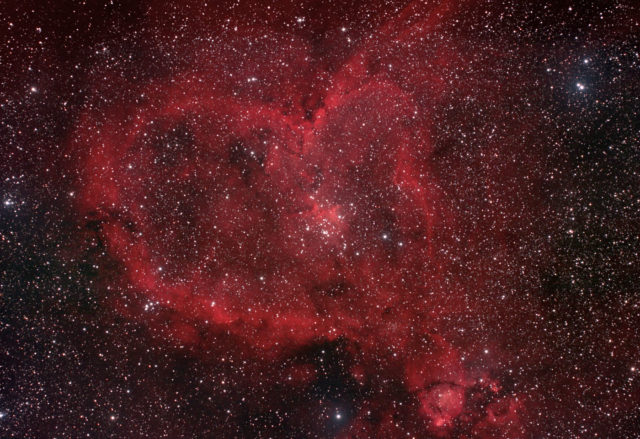 Both nebulae shine bright in red light due to the emission of that specific colour of light by the excited nearby hydrogen gas. The nebulae form a large star-forming complex in the Perseus Arm of the Milky Way. The clusters found in the region belong to the Cas OB6 association. The Heart and Soul region is barely visible in small telescopes and best seen photographically. It is a popular target for astrophotographers. 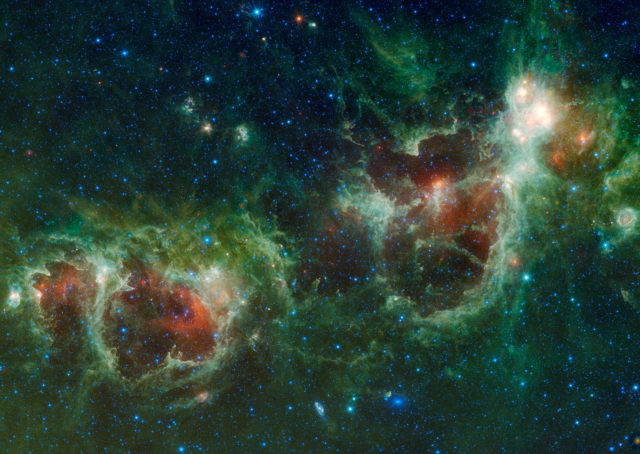 The Heart and Soul nebulae are seen in this infrared mosaic from NASA’s Wide-field Infrared Survey Explorer, or WISE. Also visible near the bottom of this image are two galaxies, Maffei 1 and Maffei 2. Maffei 1 is the bluish elliptical object and Maffei 2 is the spiral galaxy. All four infra-red detectors aboard WISE were used to make this image. Colour is representational: blue and cyan represent infra-red light at wavelengths of 3.4 and 4.6 microns, which is dominated by light from stars. Green and red represent light at 12 and 22 microns, which is mostly light from warm dust. Image: NASA/JPL-Caltech/UCLA

The brightest part of the Heart Nebula has the designation NGC 896 in the New General Catalogue. It is classified separately because it was the first part of IC 1805 to be discovered. 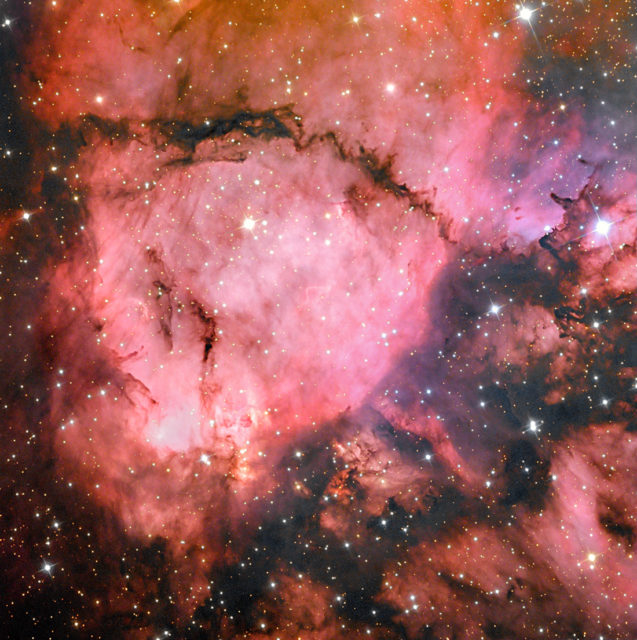 The nebula’s glow comes from the radiation of a small open cluster of stars known as Melotte 15. The cluster contains very young, blue, hot supergiant stars about 1.5 million years old. It is located near the nebula’s centre and home to several bright stars with a mass almost 50 times that of the Sun, as well as many faint stars far less massive than the Sun. Melotte 15 once contained a microquasar, a radio emitting X-ray binary system, but the system was expelled from the cluster millions of years ago. 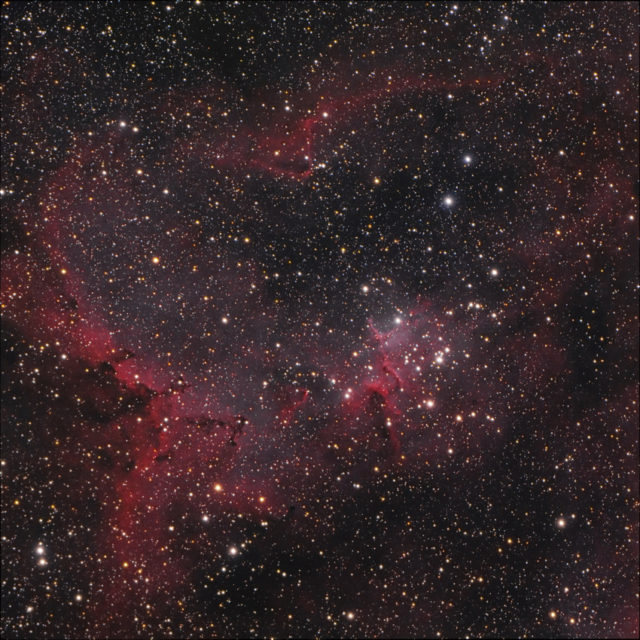 The Heart and Soul Nebulae lie in the region of the sky that also contains several smaller nebulae. The Fishhead Nebula (IC 1795) is a relatively bright nebula just to the right of IC 1805, while IC 1871 is found to the left of the Soul Nebula. 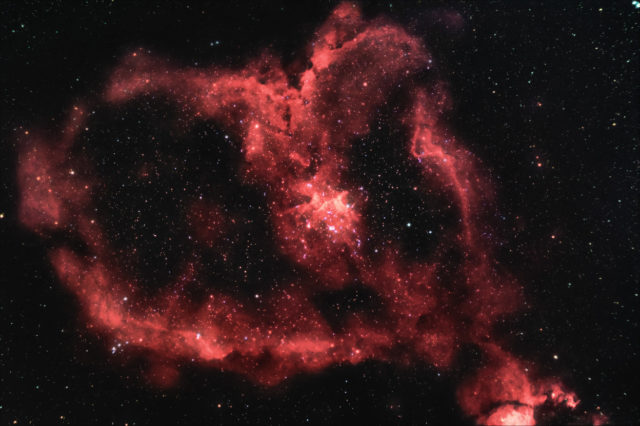 The Heart and Soul region contains a total of seven open clusters of young stars. Two of these, IC 1805 and IC 1848, are directly associated with the nebulae and share the catalogue designations with them. The others are Basel 10, occupying only 2 arcminutes of the sky, NGC 957 (10 arcminutes), and Berkeley 65 (5 arcminutes). Rounding off the group is the famous Double Cluster (the Sword Handle) in Perseus, formed by two bright, large open clusters known as h and Chi Persei or NGC 869 and NGC 884. The Heart Nebula lies only 5 degrees to the northwest of the Double Cluster.

A mosaic of images from WISE in the constellation of Cassiopeia. This region contains a large star forming nebula within the Milky Way Galaxy, called IC 1805 (sometimes called the Heart Nebula), a portion of which is seen at the right of the image. IC 1805 is over 6 thousand light-years from Earth. Also visible in this image are two nearby galaxies, Maffei 1 and Maffei 2. In visible light these galaxies are hidden by dust in IC 1805 and were unknown until 1968 when Paolo Maffei found them using infra-red observations. Both galaxies contain billions of stars and are located some 10 million light-years away (well outside our own Milky Way Galaxy). Maffei 1 is the bluish elliptical object in the centre of the image. It is a lenticular type galaxy, which has a disk-like structure and a central bulge but no spiral structure or appreciable dust content. Maffei 2 (to the upper left of Maffei 1) is a spiral type galaxy that also has a disk shape, but with a bar-like central bulge and two prominent dusty spiral arms. Image: NASA/JPL-Caltech/WISE Team

The Heart Nebula lies in the vicinity of Maffei 1 (PGC 9892) and Maffei 2 (UGCA 39), the brightest galaxies in the IC 342/Maffei Group, the nearest galaxy group to our Local Group. The galaxies are difficult to find and observe as they are obscured by the Milky Way’s dust and stars, and their features are not easy to make out. Both galaxies – the elliptical Maffei 1 and the intermediate spiral Maffei 2 – were discovered in 1967 by the Italian astronomer and infrared astronomy pioneer Paolo Maffei, who detected the galaxies via their infrared emissions.  Each galaxy contains billions of stars. At an approximate distance of 10 million light years, they are relatively close to the Milky Way compared to most known galaxies. 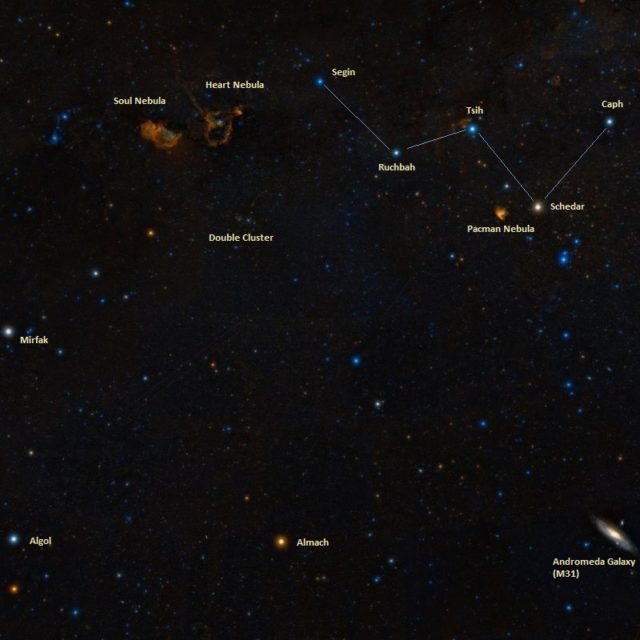