The Southern Pinwheel Galaxy, also known as Messier 83 (M83), is a barred spiral galaxy located in Hydra constellation. M83 lies at a distance of 15 million light years from Earth. It is one of the nearest and brightest spiral galaxies, and can even be seen in binoculars. The galaxy appears face-on when viewed from Earth.

Messier 83 was nicknamed the Southern Pinwheel Galaxy because of its prominent, very well defined spiral arms, which give the galaxy an appearance similar to the famous Pinwheel Galaxy (Messier 101), located in Ursa Major. Messier 83 has the designation NGC 5236 in the New General Catalogue.

Messier 83 stretches across an area of over 40,000 light years, which is roughly 40 percent the size of the Milky Way Galaxy. 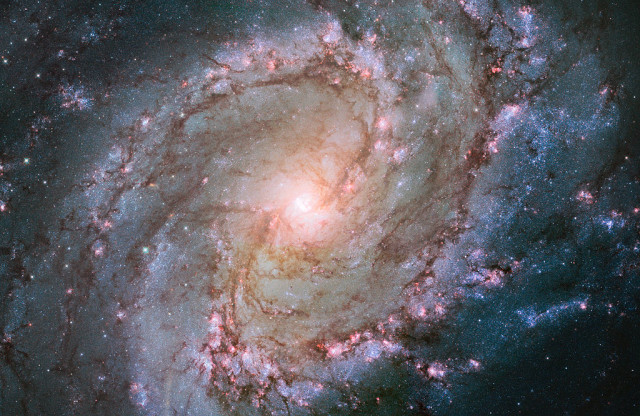 This new Hubble image shows the scatterings of bright stars and thick dust that make up spiral galaxy Messier 83, otherwise known as the Southern Pinwheel Galaxy. One of the largest and closest barred spirals to us, this galaxy is dramatic and mysterious; it has hosted a large number of supernova explosions, and appears to have a double nucleus lurking at its core. Image: NASA, ESA, and the Hubble Heritage Team (STScI/AURA) Acknowledgement: William Blair (Johns Hopkins University)

A number of barred spiral galaxies have highly luminous central regions. This happens because the central bar channels gas toward the galaxy’s core and the gas is then used to form new stars. Like many other barred spirals, the Southern Pinwheel is classified as a starburst galaxy. The galaxy is undergoing more rapid star formation than the Milky Way, especially in its central region.

The Southern Pinwheel Galaxy lies at the centre of the M83 Group, a subgroup of the Centaurus A/M83 Group, which includes the peculiar radio galaxy Centaurus A and the galaxy NGC 5253, also located in Centaurus constellation. The galaxies in the two groups are physically close to each other and the groups seem to not be moving relative to each other, so they are often identified as a single galaxy group.

The central region of Messier 83 is quite unusual. Like our neighbour, the Andromeda Galaxy (Messier 31), M83 has a double nucleus. The double nucleus does not mean that the Southern Pinwheel Galaxy has two black holes at its core, but that the single supermassive black hole in the galaxy may be ringed by a disc of stars that orbits around it, creating the appearance of a dual core at the galaxy’s centre. 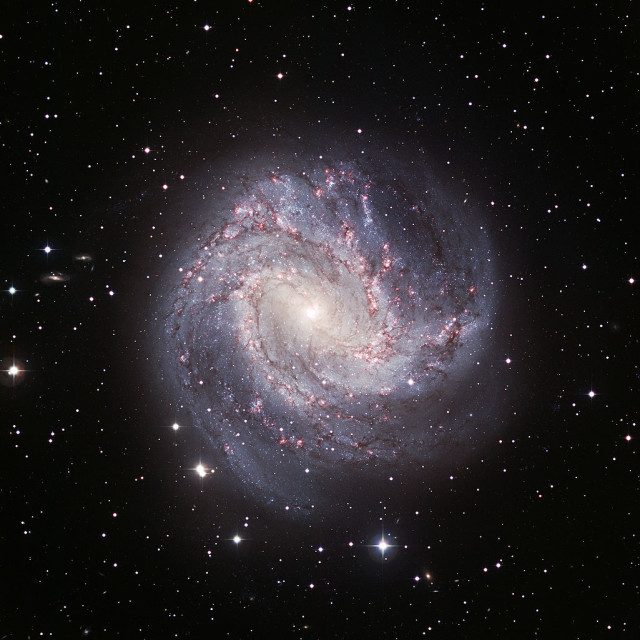 If our Milky Way were to resemble this one, we certainly would be proud of our home! The beautiful spiral galaxy Messier 83 [4] is located in the southern constellation Hydra (the Water Snake) and is also known as NGC 5236 and as the Southern Pinwheel galaxy. Its distance is about 15 million light-years. Being about twice as small as the Milky Way, its size on the sky is 11×10 arcmin2.. The image show clumpy, well-defined spiral arms that are rich in young stars, while the disc reveals a complex system of intricate dust lanes. This galaxy is known to be a site of vigorous star formation. Image: ESO

The galaxy’s visible nucleus is off centre, and astronomers have suggested that this may be the result of Messier 83 having absorbed a small satellite galaxy in the past. The nucleus may be what is left of the smaller galaxy’s core. It is offset from the true dynamical nucleus by approximately 200 light years.

The best time of year to observe M83 is the spring. For observers in the northern hemisphere, the Southern Pinwheel Galaxy is not very easy to find and requires a 3-4-inch telescope and extremely dark skies for viewing. Those south of the equator can easily find the galaxy with small binoculars.

The galaxy can be found by first locating the stars Gamma or Pi Hydrae. 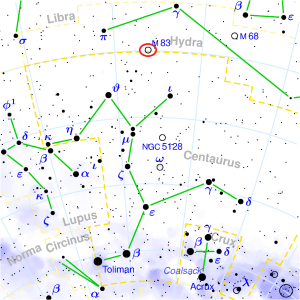 Observers in southern latitudes can locate the galaxy by first finding Iota and Theta Centauri, stars marking the head of Centaurus, and then hopping to stars i, h, k, and g Centauri. The stars g and i Centauri point in the direction of M83.

Another way is to locate the bright stars Spica and Menkent. Spica, Alpha Virginis, is the brightest star in Virgo and Menkent, Theta Centauri, is an orange giant with a visual magnitude of 2.06. Messier 83 lies about three quarters of the way from Spica to Menkent.

Spica can be found by following the arc of the Big Dipper. The two brightest stars along the imaginary extended line are Arcturus in Boötes constellation and then Spica.

Messier 83 was discovered by the French astronomer Nicolas Louis de Lacaille on February 23, 1752 from the Cape of Good Hope. He designated the object Lacaille I.6 and described it as “small nebula, shapeless.”

Charles Messier included the galaxy in his catalogue on February 17, 1781. The Southern Pinwheel Galaxy is the southernmost galaxy in Messier’s catalogue.

Upon discovery, Messier wrote, “Nebula without star, near the head of Centaurus: it appears as a faint & even glow, but it is difficult to see in the telescope, as the least light to illuminate the micrometer wires makes it disappear. One is only able with the greatest concentration to see it at all: it forms a triangle with two stars estimated of sixth & seventh magnitude: [its position was] determined from the stars i, k and h in the head of Centaurus.” 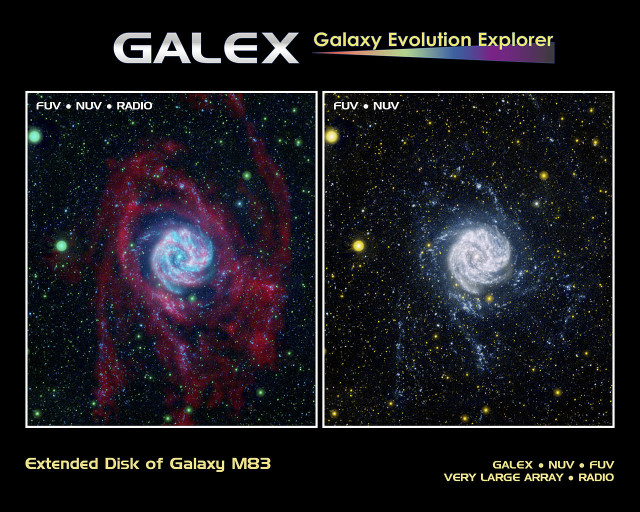 This side-by-side comparison shows the Southern Pinwheel galaxy, or M83, as seen in ultraviolet light (right) and at both ultraviolet and radio wavelengths (left). While the radio data highlight the galaxy’s long, octopus-like arms stretching far beyond its main spiral disk (red), the ultraviolet data reveal clusters of baby stars (blue) within the extended arms. The ultraviolet image was taken by NASA’s Galaxy Evolution Explorer between March 15 and May 20, 2007, at scheduled intervals. Back in 2005, the telescope first photographed M83 over a shorter period of time. That picture was the first to reveal far-flung baby stars forming up to 63,000 light-years from the edge of the main spiral disk. This came as a surprise to astronomers because a galaxy’s outer territory typically lacks high densities of star-forming materials. The newest picture of M83 from the Galaxy Evolution Explorer is shown at the right, and was taken over a longer period of time. In fact, it is one of the “deepest,” or longest-exposure, images of a nearby galaxy in ultraviolet light. This deeper view shows more clusters of stars, as well as stars in the very remote reaches of the galaxy, up to 140,000 light-years away from its core. The view at the left is a combination of the ultraviolet picture at the right and data taken by the telescopes of the National Science Foundation’s Very Large Array in New Mexico. The radio data, colored here in red, reveal extended galactic arms of gaseous hydrogen atoms, which are raw ingredients for stars. Astronomers are excited that the remote clusters of baby stars match up with the extended arms, because this helps them better understand how stars can be created out in the boondocks of a galaxy. M83 is located 15 million light-years away in the southern constellation Hydra. Image: NASA/JPL-Caltech/VLA/MPIA

M83 was the first galaxy to be found beyond the Local Group.

A double circumnuclear ring has been detected in the galaxy’s central region.

Six supernovae have been observed in the Southern Pinwheel Galaxy in the past century: SN 1923A, SN 1945B, SN 1950B, SN 1957D, SN 1968L, and SN 1983N. Along with these, astronomers have found close to 300 supernova remnants in the galaxy, which help them learn more about the progenitor stars.

The supernova SN 1957D, a Type II supernova observed in M83 in 1957, is particularly notable. Astronomers discovered the supernova remnant in radio wavelengths in 1981, in visible light in 1987, and only recently in X-ray. The spectrum of X-rays indicates that there is a pulsar within the remnant. If true, this would be the youngest pulsar known.

M83 contains around 3,000 star clusters. Some of them are less than 5 million years old. The brightest clusters are found along an arc near the galaxy’s centre.

The Southern Pinwheel Galaxy is receding from us at approximately 513 kilometres per second.

In June 2008, NASA’s Galaxy Evolution Explorer project announced the discovery of large numbers of newly formed stars in the galaxy’s outer regions. Astronomers had previously believed that these regions lacked the materials necessary for star formation to take place. 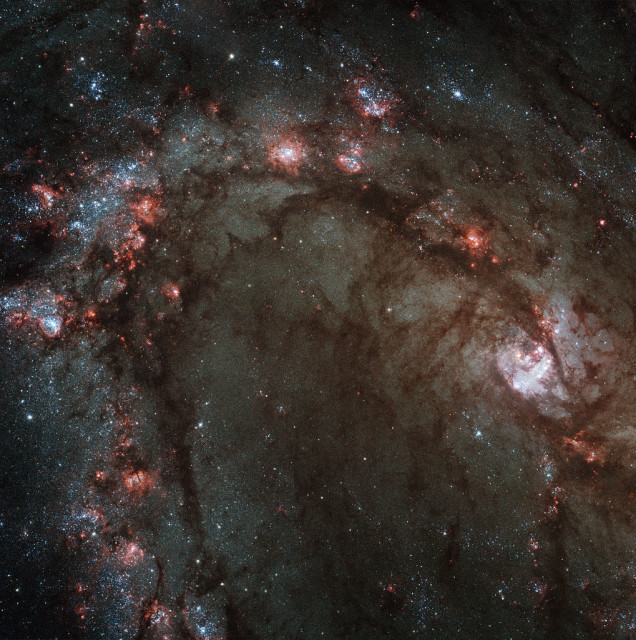 Nicknamed the Southern Pinwheel, M83 is undergoing more rapid star formation than our own Milky Way galaxy, especially in its nucleus. The sharp “eye” of the Wide Field Camera 3 (WFC3) has captured hundreds of young star clusters, ancient swarms of globular star clusters, and hundreds of thousands of individual stars, mostly blue supergiants and red supergiants. The image, taken in August 2009, provides a close-up view of the myriad stars near the galaxy’s core, the bright whitish region at far right. WFC3’s broad wavelength range, from ultraviolet to near-infrared, reveals stars at different stages of evolution, allowing astronomers to dissect the galaxy’s star-formation history. The image reveals in unprecedented detail the current rapid rate of star birth in this famous “grand design” spiral galaxy. The newest generations of stars are forming largely in clusters on the edges of the dark dust lanes, the backbone of the spiral arms. These fledgling stars, only a few million years old, are bursting out of their dusty cocoons and producing bubbles of reddish glowing hydrogen gas. The excavated regions give a colorful “Swiss cheese” appearance to the spiral arm. Gradually, the young stars’ fierce winds (streams of charged particles) blow away the gas, revealing bright blue star clusters. These stars are about 1 million to 10 million years old. The older populations of stars are not as blue. A bar of stars, gas, and dust slicing across the core of the galaxy may be instigating most of the star birth in the galaxy’s core. The bar funnels material to the galaxy’s center, where the most active star formation is taking place. The brightest star clusters reside along an arc near the core. The remains of about 60 supernova blasts, the deaths of massive stars, can be seen in the image, five times more than known previously in this region. WFC3 identified the remnants of exploded stars. By studying these remnants, astronomers can better understand the nature of the progenitor stars, which are responsible for the creation and dispersal of most of the galaxy’s heavy elements. M83, located in the Southern Hemisphere, is often compared to M51, dubbed the Whirlpool galaxy, in the Northern Hemisphere. Located 15 million light-years away in the constellation Hydra, M83 is two times closer to Earth than M51. Image: NASA, ESA, and the Hubble Heritage Team (STScI/AURA)