The Butterfly Nebula is a bipolar planetary nebula located in Scorpius. It lies at a distance of 3,800 light years from Earth. Named for its resemblance to a butterfly, the nebula has a wingspan that stretches across three light years. It is sometimes also called the Bug Nebula. It has the designation NGC 6302 in the New General Catalogue.

The Butterfly Nebula has one of the most complex structures ever seen in a planetary nebula. The dying central star is one of the hottest known stars in the galaxy. It has a surface temperature of around 222,204°C (400,000 F) and is hidden from view by dust clouds, but shines brightly in ultraviolet wavelengths. 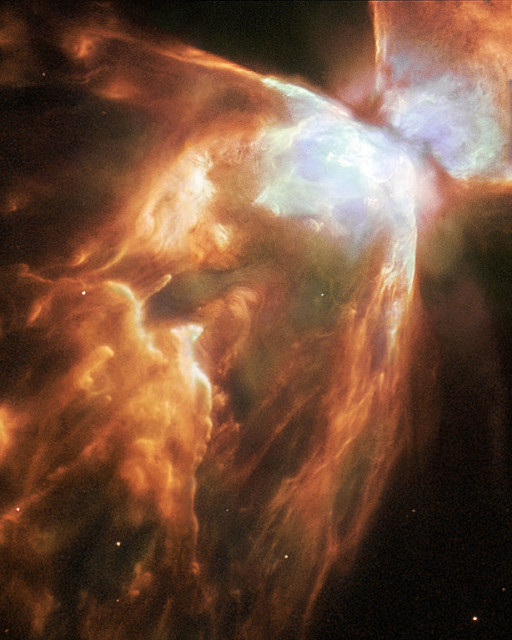 The star at the centre of the nebula is a white dwarf with an estimated mass of about 0.64 solar masses. It has a dense disc of dust and gas surrounding it at the equator, which is believed to have caused the star’s outflow of material to form the bipolar butterfly shape, resembling an hour-glass.

Planetary nebulae are formed when Sun-like stars in their final stages of life run out of fuel and start shedding off their outer layers and releasing gas at high speeds. Once the central stars begin to heat up, the radiation from the stars causes the clouds of ejected material to glow.

The term planetary nebula was first used by William Herschel in the 1780s. The objects got the name because when observed through a telescope their appearance resembled that of a planet. Even though the term is inaccurate and does not really describe these objects properly, it is still used today.

The Butterfly Nebula (NGC 6302) is not to be confused with any of the several nebulae which are either similar or referred to by that name: NGC 2346 in Monoceros constellation, the planetary nebula M2-9, also known as Minkowski’s Butterfly or the Twin Jet Nebula, found in Ophiuchus, NGC 6881 in Cygnus, NGC 5189 (Spiral Planetary Nebula) in Musca, Little Dumbbell Nebula (Messier 76) in Perseus, and IC 1318, also known as the Gamma Cygni Nebula, which lies near the centre of the Northern Cross in Cygnus.

The Butterfly Nebula has been known since at least 1888. The first known study of the object dates from 1907, when the American astronomer Edward Emerson Barnard drew and described the nebula. 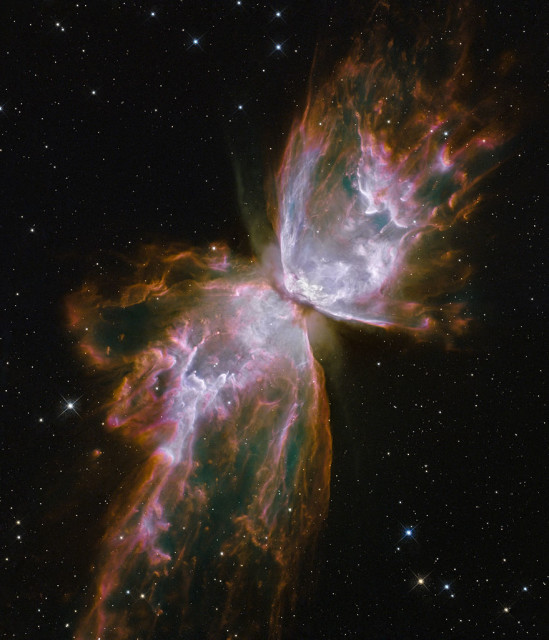 NGC 6302 lies within our Milky Way galaxy, roughly 3,800 light-years away in the constellation Scorpius. The glowing gas is the star’s outer layers, expelled over about 2,200 years. The “butterfly” stretches for more than two light-years, which is about half the distance from the Sun to the nearest star, Alpha Centauri. The central star itself cannot be seen, because it is hidden within a doughnut-shaped ring of dust, which appears as a dark band pinching the nebula in the center. The thick dust belt constricts the star’s outflow, creating the classic “bipolar” or hourglass shape displayed by some planetary nebulae. The star’s surface temperature is estimated to be about 400,000 degrees Fahrenheit, making it one of the hottest known stars in our galaxy. Spectroscopic observations made with ground-based telescopes show that the gas is roughly 36,000 degrees Fahrenheit, which is unusually hot compared to a typical planetary nebula. The WFC3 image reveals a complex history of ejections from the star. The star first evolved into a huge red-giant star, with a diameter of about 1,000 times that of our Sun. It then lost its extended outer layers. Some of this gas was cast off from its equator at a relatively slow speed, perhaps as low as 20,000 miles an hour, creating the doughnut-shaped ring. Other gas was ejected perpendicular to the ring at higher speeds, producing the elongated “wings” of the butterfly-shaped structure. Later, as the central star heated up, a much faster stellar wind, a stream of charged particles traveling at more than 2 million miles an hour, plowed through the existing wing-shaped structure, further modifying its shape. Image: NASA, ESA and the Hubble SM4 ERO Team

The Butterfly Nebula has a bipolar structure with two primary lobes and possibly another pair of lobes from an earlier phase of mass loss. The nebula’s central star is obscured by a dark lane that runs through the nebula’s waist.

NGC 6302 has a prominent northwestern lobe which is believed to have formed about 1,900 years ago.

The central star has not been detected because of the dusty torus obscuring it and absorbing a large amount of the light coming from the nebula’s central region, and because of the star’s bright background. The star has a mass approximately 0.64 times that of the Sun. It was originally much more massive, with a mass about five times solar, but ejected most of its mass in the event that resulted in the formation of the nebula. The star is currently evolving into a white dwarf. It is about 34 times as hot as the Sun and one of the hottest known stars. The ultraviolet radiation from the star is making the nebula glow.

The Butterfly Nebula was one of the bipolar planetary nebulae lying near the galactic core that were discovered to be preferentially aligned to the galactic plane of the Milky Way. The discovery, announced on September 4, 2013, suggests that there is an external force that is shaping their orientation, possibly a strong magnetic field emitted by the galaxy’s bulge.

Researchers studied over a hundred planetary nebulae in the central region of the galaxy using the Hubble Space Telescope and European Southern Observatory’s New Technology Telescope (NNT) when they found that the bipolar nebulae were in a surpring alignment with each other, with their long axes aligned along the plane of the Milky Way. The nebulae are in different locations, they have different compositions and histories, and don’t interact with each other, yet they are mysteriously aligned with one another. This is not the case with all planetary nebulae, only the bipolar ones. 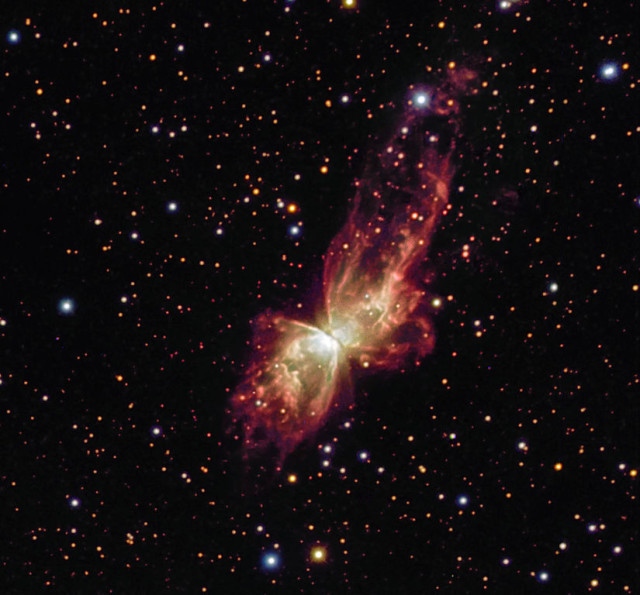 The Bug Nebula, NGC 6302, is one of the brightest and most extreme planetary nebulae known. It is located about 4,000 light-years away, towards the Scorpius constellation (the Scorpion). The nebula is the swansong of a dying solar-like star lying at its centre. At about 250,000 degrees Celsius and smothered in a blanket of hailstones, the star itself has never been observed as it is surrounded by a dense disc of gas and dust, opaque to light. This dense disc may be the origin of the hourglass structure of the nebula. This colour image, which nicely highlights the complex structure of the nebula, is a composite of three exposures through blue, green and red filters. It was made using the 1.5-metre Danish telescope at the ESO La Silla Observatory, Chile. Image: ESO/IDA/Danish 1.5 m/R. Gendler, A. Hornstrup and J.-E. Ovaldsen 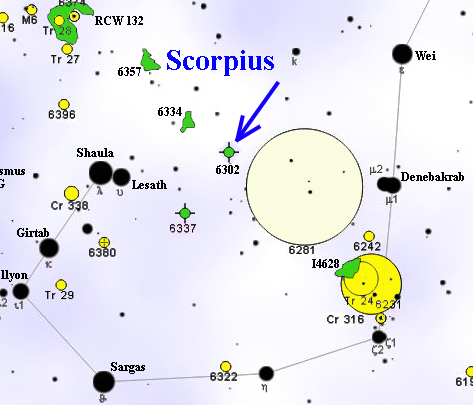