The Twin Jet Nebula is a bipolar planetary nebula located in the constellation Ophiuchus. It is also known as Minkowski 2-9 (M2-9), Minkowski’s Butterfly or the Wings of a Butterfly Nebula. The nebula lies at a distance of 2,100 light years from Earth and has an apparent magnitude of 14.7. It was named after Rudolph Minkowski, the German-American astronomer who discovered it in 1947.

The nebula is known for its peculiar form, with twin lobes of material emanating from the central progenitor star. The nebula’s appearance, with two jets discharged by the star creating the shape of the lobes, has earned it the name Twin Jet Nebula. The huge jets of gas are moving at speeds of more than 1 million km/h.

The central star is in fact a binary system composed of a white dwarf and a companion in a close orbit. Both stars have roughly the same mass as the Sun. The primary component is estimated to have a mass of 1.0 to 1.4 solar masses and the companion, between 0.6 and 1.0 solar masses.

The primary component, once a red giant, expelled most of its outer layers and is contracting into a white dwarf, a hot, exposed stellar core, that illuminates the ejected material. The star was probably similar to the Sun early in its life. The companion is suspected to be engulfed by the white dwarf’s expanding atmosphere and the interaction between the two is creating and shaping the surrounding nebula. 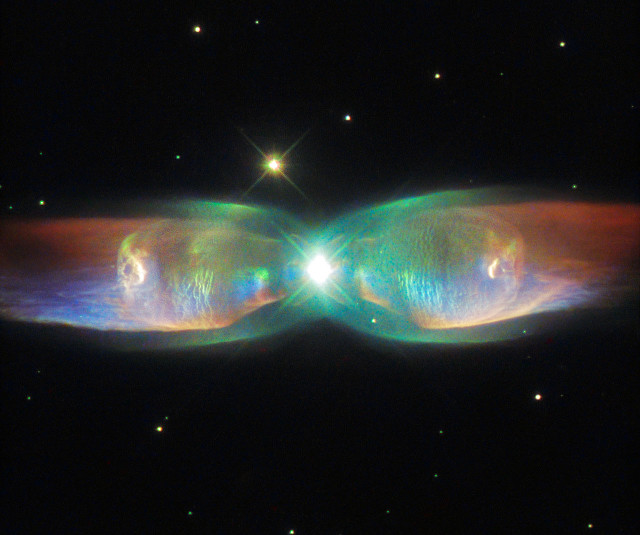 The Twin Jet Nebula, or PN M2-9, is a striking example of a bipolar planetary nebula. Bipolar planetary nebulae are formed when the central object is not a single star, but a binary system, Studies have shown that the nebula’s size increases with time, and measurements of this rate of increase suggest that the stellar outburst that formed the lobes occurred just 1200 years ago. Image: ESA/Hubble & NASA. Acknowledgement: Judy Schmidt

The shape of the nebula’s wings is believed to be caused by the movement of the central two stars. The gas expelled by the dying star creates two lobes of material instead of expanding into a sphere. The stars complete an orbit around each other every 100 years or so and the rotation allows the white dwarf to keep accumulating gas from the companion. 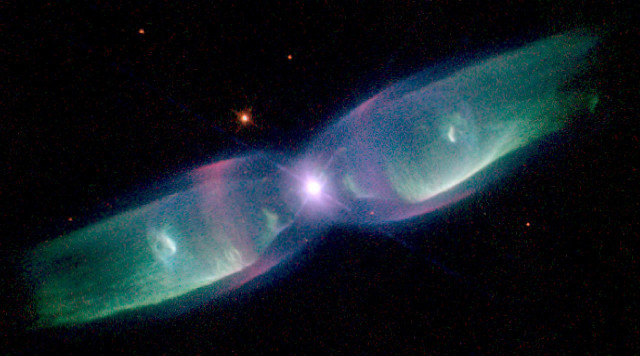 M2-9 is a striking example of a “butterfly” or a bipolar planetary nebula. Another more revealing name might be the “Twin Jet Nebula.” If the nebula is sliced across the star, each side of it appears much like a pair of exhausts from jet engines. Indeed, because of the nebula’s shape and the measured velocity of the gas, in excess of 200 miles per second, astronomers believe that the description as a super-super-sonic jet exhaust is quite apt. This is much the same process that takes place in a jet engine: The burning and expanding gases are deflected by the engine walls through a nozzle to form long, collimated jets of hot air at high speeds. M2-9 is 2,100 light-years away in the constellation Ophiucus. The observation was taken Aug. 2, 1997 by the Hubble telescope’s Wide Field and Planetary Camera 2. In this image, neutral oxygen is shown in red, once-ionized nitrogen in green, and twice-ionized oxygen in blue. Image: NASA, Bruce Balick University of Washingtom, Vincent Icke Leiden

A fast stellar wind is responsible for inflating the nebula’s wings. The wind blows out into the surrounding disk, expanding the wings perpendicular to the disk. Based on the rate of expansion of the wings, the nebula is estimated to be about 1,200 years old.

In August 2015, observations with the NASA/ESA Hubble Space Telescope revealed the remarkably complex structure of the Twin Jet Nebula, with a detailed view of its shells and knots of expanding gas.

The Twin Jet Nebula is sometimes called simply the Butterfly Nebula, but should not be confused with NGC 6302, a bipolar planetary nebula in Scorpius, more commonly known as the Butterfly Nebula, or any of the other nebulae sometimes referred to by that name: NGC 2346 in Monoceros, NGC 5189 (Spiral Planetary Nebula) in Musca, NGC 6881 in Cygnus, and IC 1318 (Gamma Cygni Nebula), also in Cygnus. 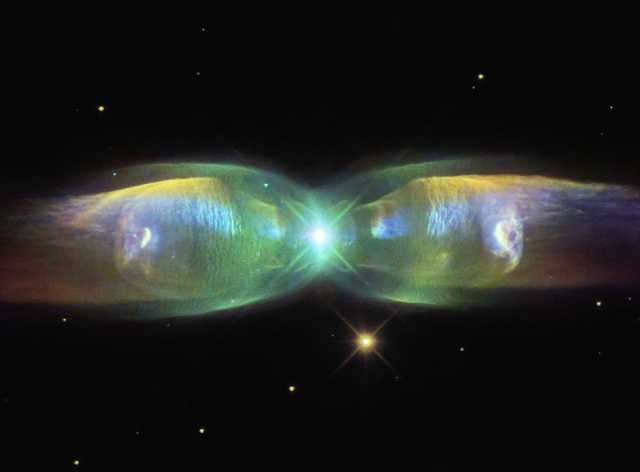 Hubble ESA: The wings of the Twin Jet Nebula

Zooming in on the Twin Jet Nebula

Panning across the Twin Jet Nebula