The Cat’s Paw Nebula, also known as the Bear Claw Nebula, is an emission nebula in Scorpius. The nebula is about 50 light years across and lies at an approximate distance of 5,500 light years from Earth. It is one of the nearest H II regions to the solar system. It has the designation NGC 6334 in the New General Catalogue.

The large glowing cloud earned the nickname Cat’s Paw because it looks like a gigantic pawprint of a cat. The nebula is a popular target of study as a nearby example of a vast, very active stellar nursery.

NGC 6334 is a large star forming region, covering an area in the night sky slightly larger than the full Moon. It is one of the most active stellar nurseries producing massive stars in the Milky Way Galaxy. The hot young stars embedded in the nebula are responsible for its glow. The stars are each roughly 10 times as massive as the Sun and were formed relatively recently, within the last few million years. 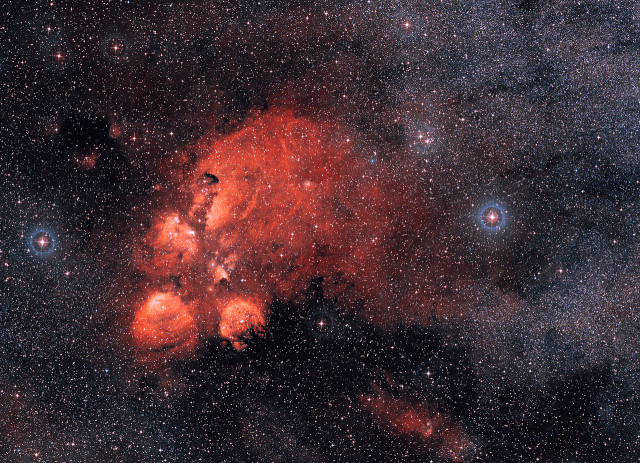 NGC 6334 may contain tens of thousands of stars, many of them concealed deep within the nebula’s dust. The nebula also contains a vast supply of material needed for star formation, roughly equal to a mass of 200,000 Suns .

A study conducted by researchers from the Harvard-Smithsonian Center for Astrophysics and released in 2013 suggests that the Cat’s Paw Nebula may be undergoing a stellar “baby boom,” a period of rapid star formation. 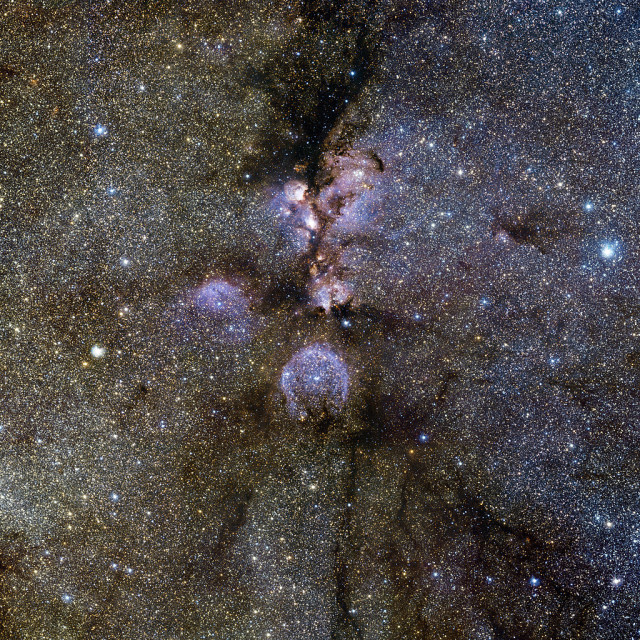 The region is producing new stars at a more rapid pace than the more famous Orion Nebula (Messier 42), making NGC 6334 one of the most prolific stellar nurseries known in the Milky Way.

The nebula is home to about 2,000 extremely young stars that are still surrounded by protoplanetary disks, rotating disks of dense gas and dust that surround newly formed stars. The majority of these stars are formed in clusters. 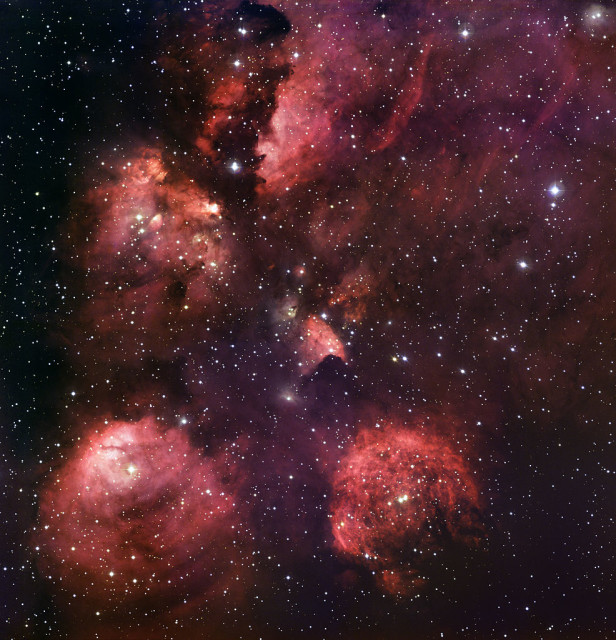 This new portrait of NGC 6334 was created from images taken with the Wide Field Imager instrument at the 2.2-metre MPG/ESO telescope at the La Silla Observatory in Chile, combining images taken through blue, green and red filters, as well as a special filter designed to let through the light of glowing hydrogen. NGC 6334 lies about 5500 light-years from Earth in the constellation of Scorpius. The whole gas cloud is about 50 light-years across. NGC 6334 is one of the most active nurseries of massive stars in our galaxy and has been extensively studied by astronomers. The nebula conceals freshly minted brilliant blue stars — each nearly ten times the mass of our Sun and born in the last few million years. The region is also home to many baby stars that are buried deep in the dust, making them difficult to study. In total, the Cat’s Paw Nebula could contain several tens of thousands of stars. The nebula appears red because its blue and green light are scattered and absorbed more efficiently by material between the nebula and Earth. The red light comes predominantly from hydrogen gas glowing under the intense glare of hot young stars. Image: ESO

The cause of the rapid star formation in NGC 6334 is still unknown. Scientists have ruled out two common causes of stellar baby booms: a nearby supernova explosion and galaxy collision. Neither of these explains the increased star forming activity in the nebula. The starburst period began relatively recently and will likely end within the next few million years.

The nebula’s distinctly red glow is the result of an abundance of ionised hydrogen atoms. The dust in NGC 6334 has an extremely low temperature, around -445 F (8 K or -265°C).

The Cat’s Paw Nebula was discovered by the British astronomer John Herschel on June 7, 1837. Herschel used one of the largest telescopes available at the time and observed the nebula from the Cape of Good Hope in South Africa.

NGC 6334 lies near the diffuse nebula NGC 6357, popularly known as the War and Peace Nebula, which also contains a number of young stars, as well as proto-stars embedded within dark disks of gas. 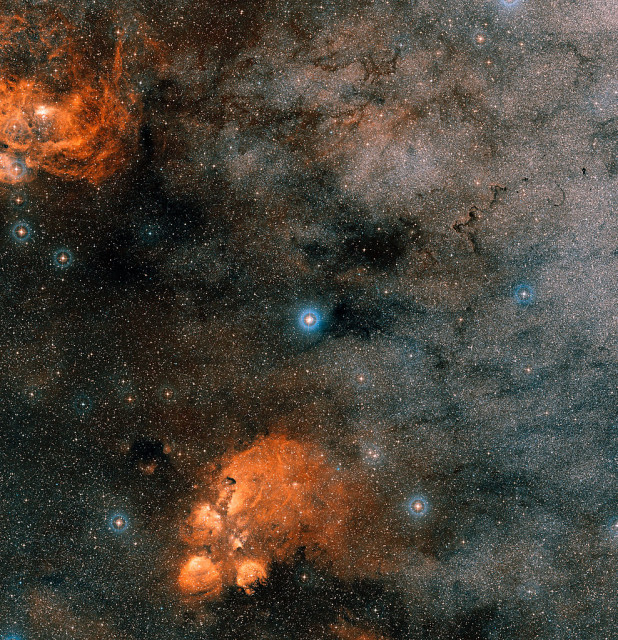 This picture shows the sky around multiple star Gliese 667. The bright star at the centre is Gliese 667 A and B, the two main components of the system, which cannot be separated in this image. Gliese 667C, the third component, is visible as a bright star, very close and just under A and B, still in the glare of these brighter stars. The very subtle wobbles of Gliese 667C, measured with high precision spectrographs including HARPS, revealed it is surrounded by a full planetary system, with up to seven planets. This picture also shows two regions of star formation, much further from Earth than Gliese 667. At the upper-left NGC 6357 is visible and towards the bottom of the picture NGC 6334 (The Cat’s Paw Nebula). Image: ESO

In the future, the Cat’s Paw Nebula will look a bit like multiple Pleiades star clusters, each containing up to several thousand stars.

However, as the nebula is more than 10 times farther away than the Pleiades (Messier 45) and obscured by a lot of dust, the sight won’t be nearly as impressive from Earth. 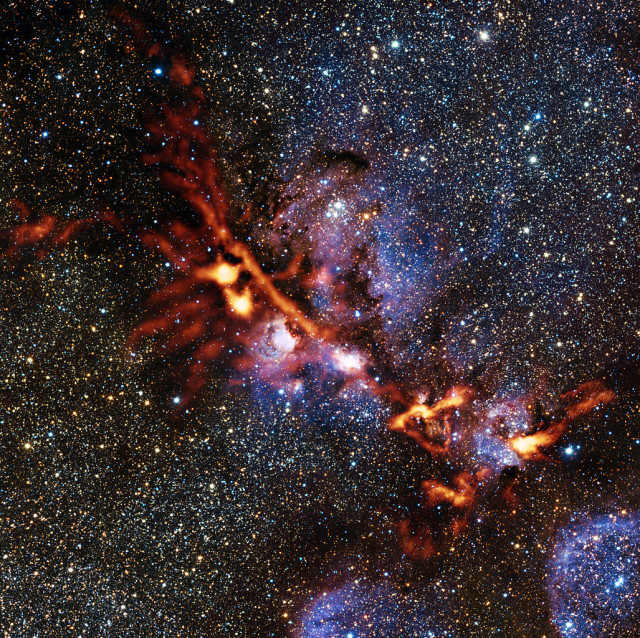 This image of the star formation region NGC 6334 is one of the first scientific images from the ArTeMiS instrument on APEX. The picture shows the glow detected at a wavelength of 0.35 millimetres coming from dense clouds of interstellar dust grains. The new observations from ArTeMiS show up in orange and have been superimposed on a view of the same region taken in near-infrared light by ESO’s VISTA telescope at Paranal. Image: ArTeMiS team/Ph. André, M. Hennemann, V. Revéret et al./ESO/J. Emerson/VISTA, 2013 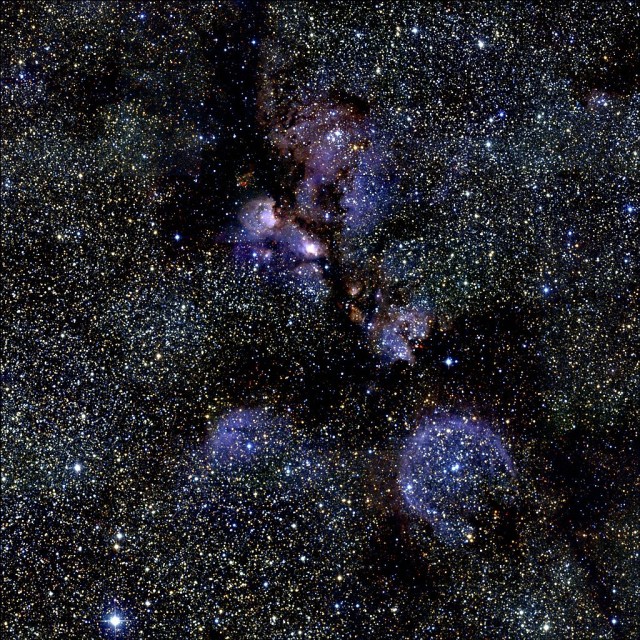 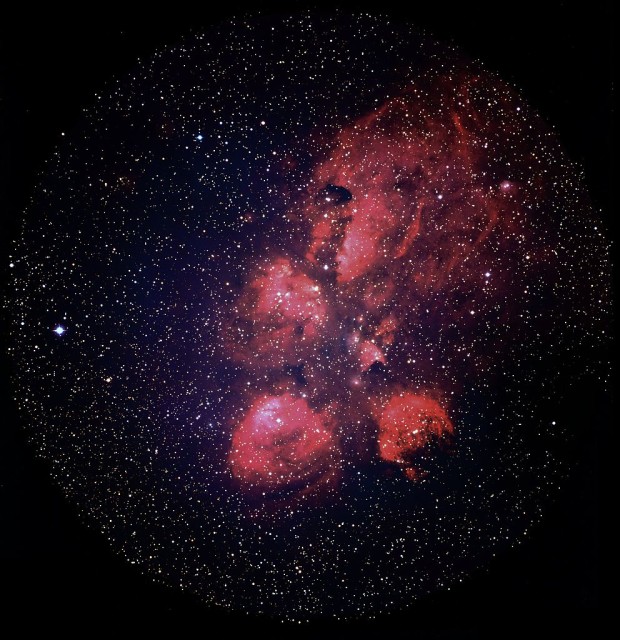 The distinctive-looking Cat’s Paw Nebula, also known as the Bear Claw Nebula and cataloged as NGC 6334, is located in the constellation Scorpius. ESO’s 3.6-meter Telescope at the La Silla observatory in Chile gathered the light for this image in 1986. Image: ESO