The Veil Nebula is a diffuse nebula located in the northern constellation Cygnus, the Swan. Also known as Witch’s Broom Nebula, Bridal Veil Nebula, Cirrus Nebula, or Filamentary Nebula, it constitutes the visible parts of the Cygnus Loop, a supernova remnant in Cygnus. It is located at an approximate distance of 1,470 light years from Earth.

Portion of the Veil Nebula as photographed by the Hubble Space Telescope. The Hubble image was created from HST data from proposals 5774 and 5779: J. Hester (Arizona State University) and J. Westphal (Caltech). Image: NASA, ESA, and the Hubble Heritage (STScI/AURA)-ESA/Hubble Collaboration

The Veil Nebula is a frequent object of study for astronomers because it is large, located relatively close to Earth, and makes a good example of a middle-aged supernova remnant. For amateur astronomers, the nebula makes one of the most spectacular objects in the northern sky.

Different regions of the Veil Nebula have different nicknames. The Western Veil Nebula is also known as the Witch’s Broom, while the Eastern Veil is sometimes called the Network Nebula.

The Veil Nebula lies a few degrees to the south of the star Epsilon Cygni, also known as Gienah. Gienah is one of the stars of the Northern Cross and marks the right wing of the celestial Swan.

The Western Veil Nebula, NGC 6960, is the easiest component to find as it lies behind the star 52 Cygni, which is bright enough to be seen without binoculars. The star is not physically associated with the supernova remnant.

The Eastern Veil Nebula is also relatively easy to find. NGC 6974 and NGC 6979 can be seen as knots along the nebula’s northern border, while Fleming’s Triangle is significantly fainter and harder to observe.

This image is a stunning close-up of the Veil Nebula – the shattered remains of a supernova that exploded some 5-10,000 years ago. The image provides a beautiful view of the delicate, wispy structure resulting from this cosmic explosion. Also known as Cygnus Loop, the Veil Nebula is located in the constellation of Cygnus, the Swan, and is about 1,500 light-years away from Earth. This small portion of the Veil Nebula is located in the larger segment seen in its western part (the top left corner of the large ground-based overview image). The entire structure spans about 3 degrees, corresponding to about 6 full moons. The image was taken with Hubble’s Wide Field and Planetary Camera 2 (WFPC2). The colour is produced by composite of three different images. The different colours indicate emission from different kinds of atoms excited by the shock: blue shows oxygen, green shows sulphur, and red shows hydrogen. Image: NASA, ESA, and the Hubble Heritage (STScI/AURA)-ESA/Hubble Collaboration. Acknowledgment: J. Hester (Arizona State University)

Even though the Veil Nebula is relatively bright with an apparent magnitude of 7.0, it stretches over a large area and its surface brightness is pretty low, which makes it difficult to see without an OIII filter. The filter isolates the wavelength of light from doubly ionized oxygen, allowing astronomers to see the nebula using any telescope.

While the nebula can be found using binoculars under very dark skies, the intricate lacework that it is known for can be seen in a 200 mm (8-inch) or larger telescope.

The wispy, intertwined structure of the nebula is a result of vast amounts of energy released as the debris from the supernova explosion moves at high speeds through the area, creating shock fronts. The debris moves at about 600,000 kilometres per hour and heats the surrounding gas to millions of degrees. As the material cools, it creates the coloured glows. 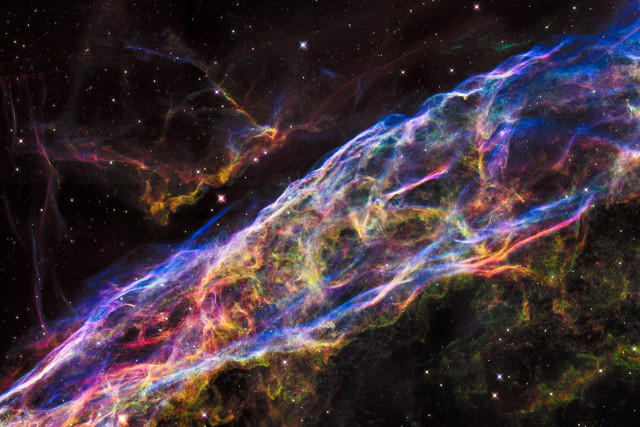 NASA’s Hubble Space Telescope has unveiled in stunning detail a small section of the expanding remains of a massive star that exploded about 8,000 years ago. Called the Veil Nebula, the debris is one of the best-known supernova remnants, deriving its name from its delicate, draped filamentary structures. The entire nebula is 110 light-years across, covering six full moons on the sky as seen from Earth, and resides about 2,100 light-years away in the constellation Cygnus, the Swan. This view is a mosaic of six Hubble pictures of a small area roughly two light-years across, covering only a tiny fraction of the nebula’s vast structure. This close-up look unveils wisps of gas, which are all that remain of what was once a star 20 times more massive than our sun. The fast-moving blast wave from the ancient explosion is plowing into a wall of cool, denser interstellar gas, emitting light. The nebula lies along the edge of a large bubble of low-density gas that was blown into space by the dying star prior to its self-detonation. Image: NASA/ESA/Hubble Heritage Team, 2015 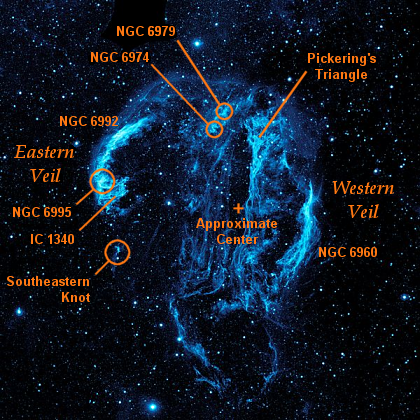 The Cygnus Loop is a large supernova remnant that originated in an explosion roughly 5,000 to 8,000 years ago, and has since expanded to cover a region about 3 degrees in diameter. This roughly equals six times the diameter of the full Moon.

At the time of the explosion, the supernova was likely as bright as a crescent Moon. The remnant has faded since and can now only be seen in a telescope.

The Cygnus Loop is a known source of soft X-rays. The X-ray source Cygnus X-5 coincides with the supernova remnant.

The Veil Nebula has several NGC designations because it is quite large. It consists of three main components: the Western Veil, the Eastern Veil, and Pickering’s Triangle. The names Veil Nebula, Filamentary Nebula, and Cirrus Nebula are generally used for the entire visible portion of the supernova remnant and sometimes even for the whole Cygnus Loop.

The Western Veil Nebula lies near the foreground star 52 Cygni. It is also known as Witch’s Broom Nebula, Filamentary Nebula, Finger of God Nebula, Lace-work Nebula, or Caldwell 34. It has the designation NGC 6960 in the New General Catalogue, which is sometimes used as an identifier for the entire nebula. 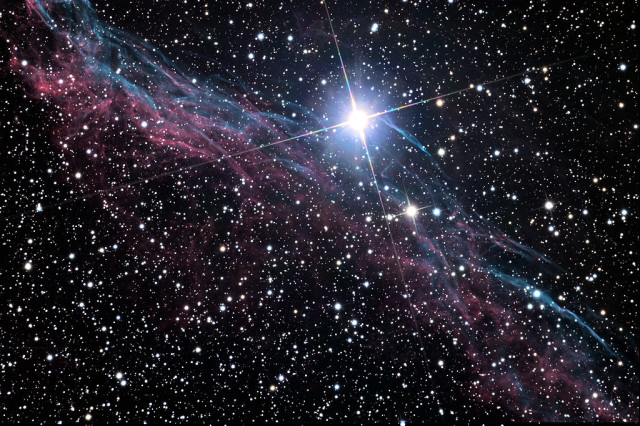 The Witch’s Broom is the western-most object in the Veil Nebula. It spans a region of about 35 light years.

The Eastern Veil Nebula is also known as Caldwell 33. 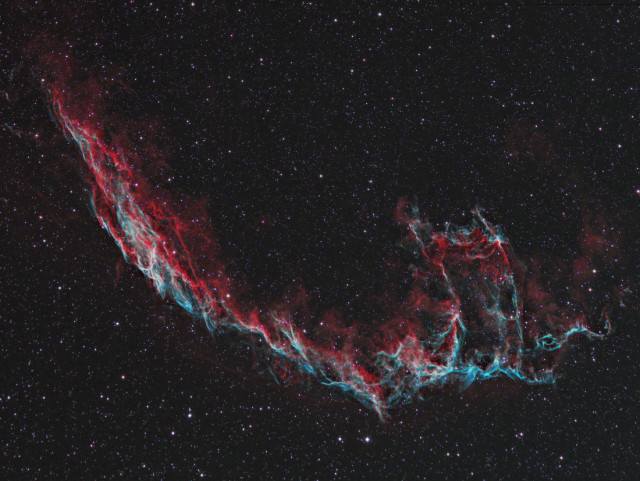 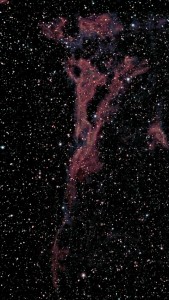 It is brightest along the northern side. It was originally named after Edward Charles Pickering, the director of the Harvard Observatory, where Williamina Fleming discovered the object.

The southeastern knot of the Cygnus Loop was likely produced as a result of a collision of the supernova’s blast wave and a nearly small isolated cloud. The knot is an X-ray source.

Pickering’s Triangle, a fainter portion of the nebula, was discovered by Williamina Fleming in 1904. It wasn’t assigned a NGC number because it was discovered after the New General Catalogue was published.

The distance to the Veil Nebula is uncertain, but current estimates based on the Far Ultraviolet Spectroscopic Explorer (FUSE) data support an approximate distance of 1,470 light years from Earth. 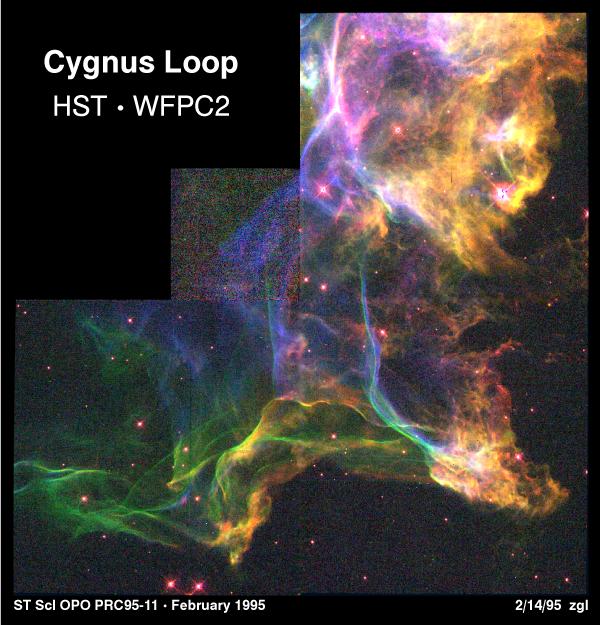 This image shows a small portion of a nebula called the “Cygnus Loop.” Covering a region on the sky six times the diameter of the full Moon, the Cygnus Loop is actually the expanding blastwave from a stellar cataclysm – a supernova explosion – which occurred about 15,000 years ago. In this image the supernova blast wave, which is moving from left to right across the field of view, has recently hit a cloud of denser than average interstellar gas. This collision drives shock waves into the cloud that heats interstellar gas, causing it to glow. Image: Jeff Hester (Arizona State University) and NASA

Until recently, the distance was estimated at about 2,500 light years. In 1999, William Blair compared the angular expansion of the nebula along the size of the bubble with direct measurements of the nebula’s radial expansion in our direction. He discovered that the size of the bubble was roughly 40 percent smaller than previously believed, which led to an estimated distance of 1,470 light years.

A more recent survey revealed that a star, designated KPD2055+311, that appeared in far-ultraviolet pictures of the nebula, was at a distance of 1,860 light years, which placed it behind the Cygnus Loop.

The Cygnus Loop has a radio source designation W78 and is also known as Sharpless 103.

The Veil Nebula is one of the brightest, largest X-ray sources in the sky. The analysis of its emissions indicate that it contains oxygen, hydrogen, and sulphur. 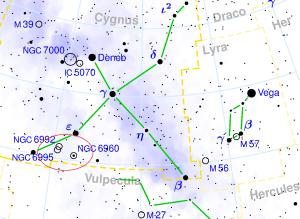 The Western Veil (also known as Caldwell 34), consisting of NGC 6960 (the “Witch’s Broom”) near the foreground star 52 Cygni. Image: Hewholooks at wikipedia.org 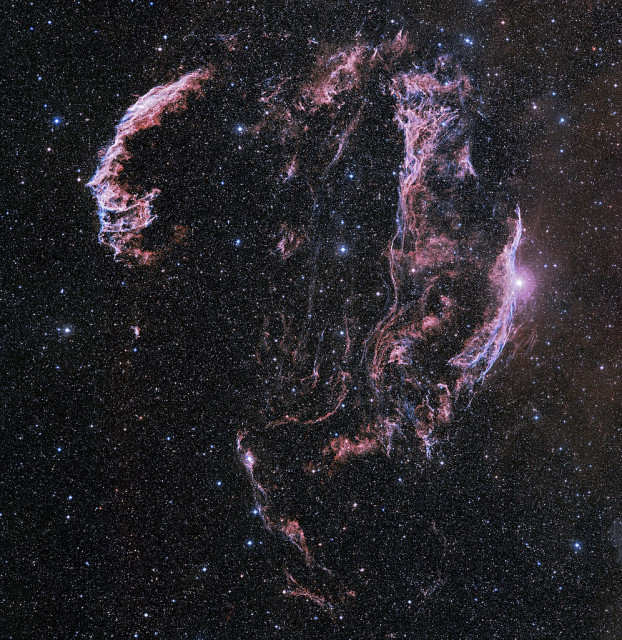 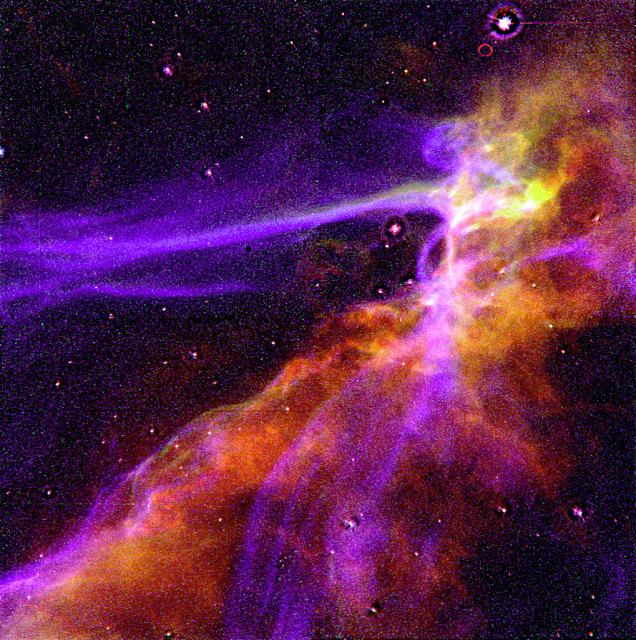 This is an image of a small portion of the Cygnus Loop supernova remnant, which marks the edge of a bubble-like, expanding blast wave from a colossal stellar explosion, occurring about 15,000 years ago. The HST image shows the structure behind the shock waves, allowing astronomers for the first time to directly compare the actual structure of the shock with theoretical model calculations. Besides supernova remnants, these shock models are important in understanding a wide range of astrophysical phenomena, from winds in newly-formed stars to cataclysmic stellar outbursts. The supernova blast is slamming into tenuous clouds of insterstellar gas. This collision heats and compresses the gas, causing it to glow. The shock thus acts as a searchlight revealing the structure of the interstellar medium. The detailed HST image shows the blast wave overrunning dense clumps of gas, which despite HST’s high resolution, cannot be resolved. This means that the clumps of gas must be small enough to fit inside our solar system, making them relatively small structures by interstellar standards. A bluish ribbon of light stretching left to right across the picture might be a knot of gas ejected by the supernova; this interstellar “bullet” traveling over three million miles per hour (5 million kilometres) is just catching up with the shock front, which has slowed down by ploughing into interstellar material. Image: NASA, J.J. Hester Arizona State University 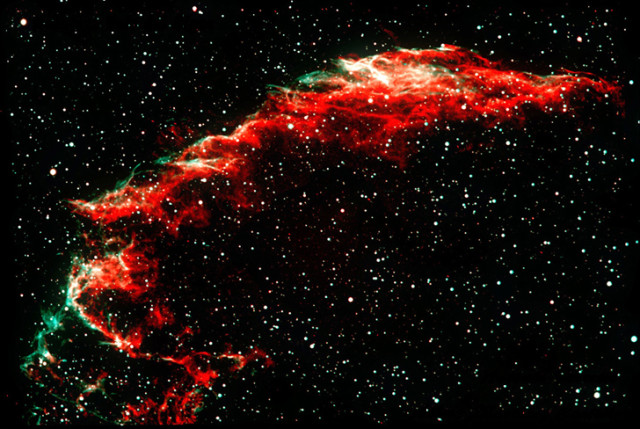 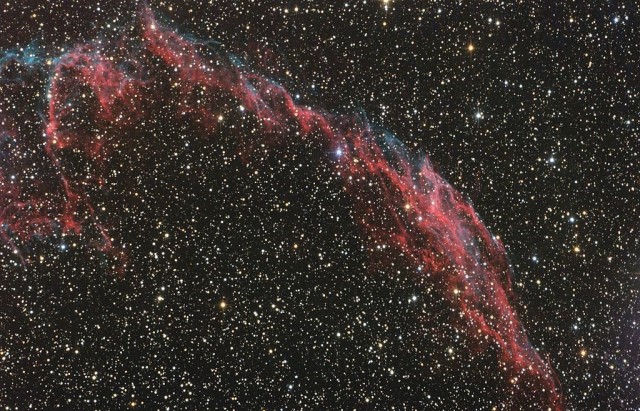 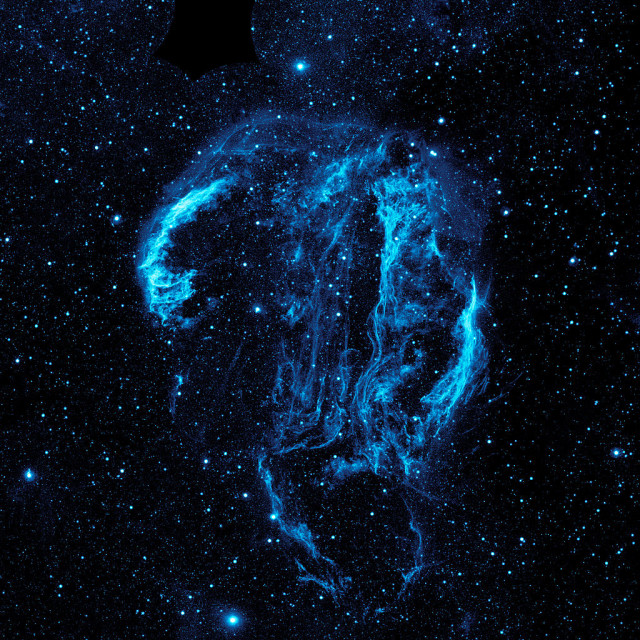 Wispy tendrils of hot dust and gas glow brightly in this ultraviolet image of the Cygnus Loop nebula, taken by NASA’s Galaxy Evolution Explorer. The nebula lies about 1,500 light-years away, and is a supernova remnant, left over from a massive stellar explosion that occurred between 5,000 to 8,000 years ago. The Cygnus Loop extends over three times the size of the full moon in the night sky, and is tucked next to one of the “swan’s wings” in the constellation of Cygnus. The filaments of gas and dust visible here in ultraviolet light were heated by the shockwave from the supernova, which is still spreading outward from the original explosion. The original supernova would have been bright enough to be seen clearly from Earth with the naked eye. Image: NASA/JPL-Caltech

Hubble Zooms in on Shrapnel from an Exploded Star

Moving filaments of the Veil Nebula

Panning across the Veil Nebula