The Soap Bubble Nebula is a planetary nebula located near the larger and better known Crescent Nebula (NGC 6888) in the constellation Cygnus. Notable for its spherical symmetry, the faint nebula looks like a transparent soap bubble set against the rich stars fields of the Northern Cross region. It is catalogued as PN G75.5+1.7. 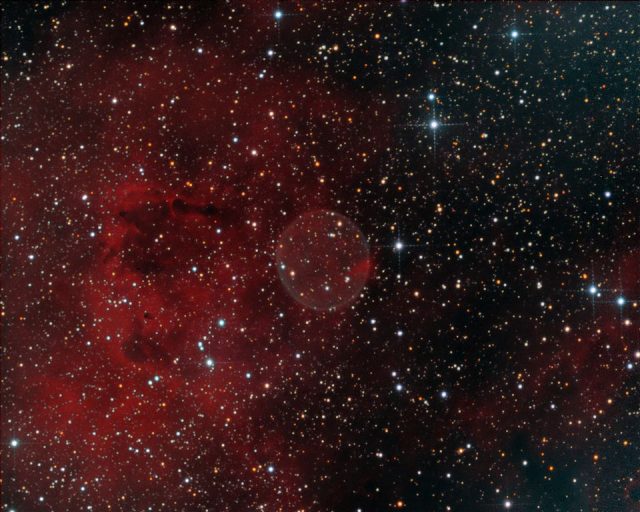 The nebula was discovered in July 2008 by amateur astronomer Dave Jurasevich using an Astro-Physics 160 mm refractor telescope. It is a very faint object occupying only 4′ 20” of apparent sky and it is embedded in a diffuse nebula, which is why it was not discovered until recently. The nebula’s estimated distance is 4,000 to 5,000 light years.

Planetary nebulae are formed when stars eject a glowing shell of material in the final stage of their lives. Most planetary nebulae are elliptical or bipolar in shape and only 20% of them are spherically symmetric. The planetary nebulae Abell 39 in the constellation Hercules and the Lemon Slice Nebula (IC 3568) in Camelopardalis are among the best known examples of spherical morphology. Spherical nebulae such as these and the Soap Bubble are believed to be produced by evolved stars similar to the Sun.