The Porpoise Galaxy (NGC 2936) is an irregular galaxy located in the constellation Hydra. It lies at a distance of 352 million light years from the Sun and has an apparent magnitude of 12.85.

Located in the region of the sky between the bright Regulus in Leo and Alphard in Hydra, NGC 2936 is currently in the process of interacting with the elliptical galaxy NGC 2937. As a result of the interaction, the galaxy’s shape has been severely distorted into one that resembles a porpoise or a penguin. 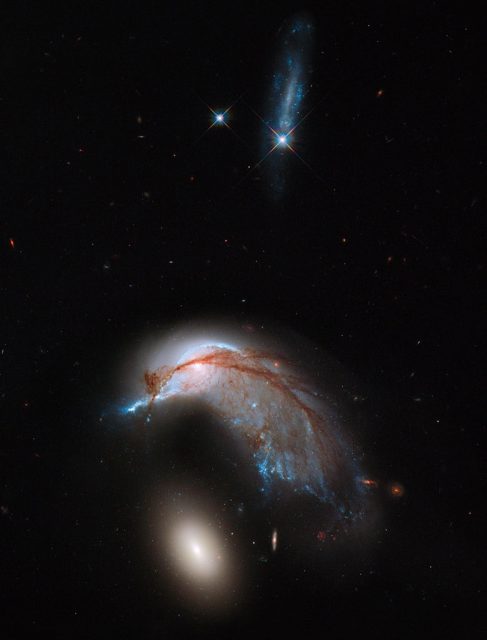 This image shows the two galaxies interacting. NGC 2936, once a standard spiral galaxy, and NGC 2937, a smaller elliptical, bear a striking resemblance to a penguin guarding its egg. This image is a combination of visible and infrared light, created from data gathered by the NASA/ESA Hubble Space Telescope Wide Field Planetary Camera 3 (WFC3). Image: NASA, ESA and the Hubble Heritage Team (STScI/AURA)

Due to the tidal interaction with the neighbouring galaxy, the dust and gas are being drawn out from the centre of NGC 2936 and, as they become compressed, they trigger the formation of new stars. The star-forming regions of NGC 2936 appear as bluish knots in the heavily distorted spiral arms that stretch in the direction of the elliptical galaxy. The reddish dust that used to be in the galaxy’s centre has mostly been expelled during the encounter, and what was once the galactic bulge now marks the eye of the porpoise.

Only a few hundred million years ago, NGC 2936 was likely a regular spiral galaxy. In another billion years, the pair will merge into a single larger galaxy. A study published in 2019 suggests that the first pericenter passage between the galaxies occurred only about 50 ± 25 million years ago.

The neighbour, NGC 2937, contains very little dust and gas and its stars are mostly old. While the orbits of its stars may be affected by the encounter with NGC 2936, the effect of the interaction is not apparent. 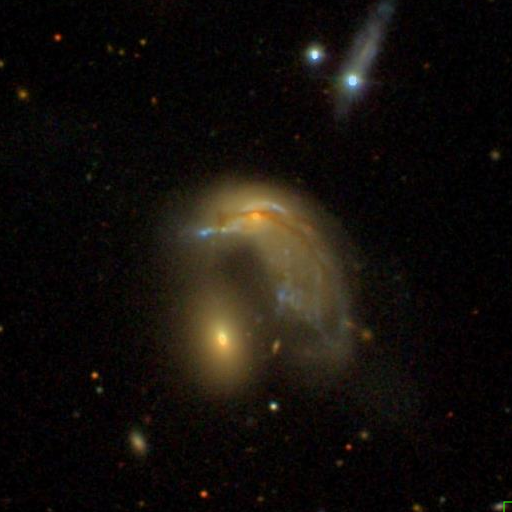 The interacting pair is catalogued as Arp 142 in Halton Arp’s Atlas of Peculiar Galaxies. Arp 142 is listed as a “galaxy triplet” and includes the blue galaxy appearing next to NGC 2936, catalogued as UGC 5130 or PGC 1237172. PGC 1237172 is either an edge-on spiral or an irregular galaxy. It does not lie at the same distance as the colliding pair and is not physically related to the two galaxies.