The Cone Nebula is a famous H II region located in the constellation Monoceros, the Unicorn. It lies at an approximate distance of 2,700 light years from Earth and is located in the Orion Arm of the Milky Way. The nebula is part of the larger star forming region around the Christmas Tree Cluster. The two objects share the designation NGC 2264 in the New General Catalogue.

The Cone Nebula has an apparent length of 10 arcminutes, corresponding to a spatial extension of about 7 light years. It is faint when observed visually, but makes a stunning sight in long exposure photographs.

The nebula forms the southern part of NGC 2264, while the Christmas Tree Cluster forms the northern.  The entire region of NGC 2264 occupies an area of 20 arcminutes and has a visual magnitude of 3.9. 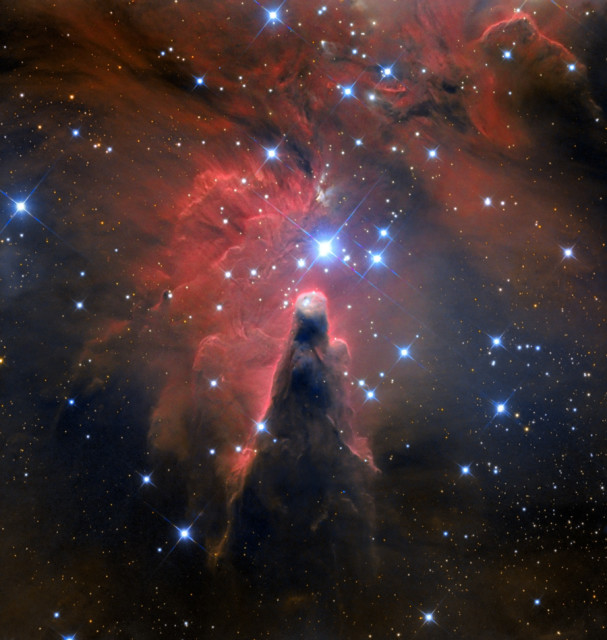 The Cone Nebula is relatively easy to find because it lies in a region that contains many bright stars. It is located in the northern part of Monoceros, north of the line drawn from Procyon in Canis Minor to Betelgeuse in Orion, and not far from the brighter Rosette Nebula. The Cone Nebula can be seen in 10-inch and larger telescopes under dark skies. 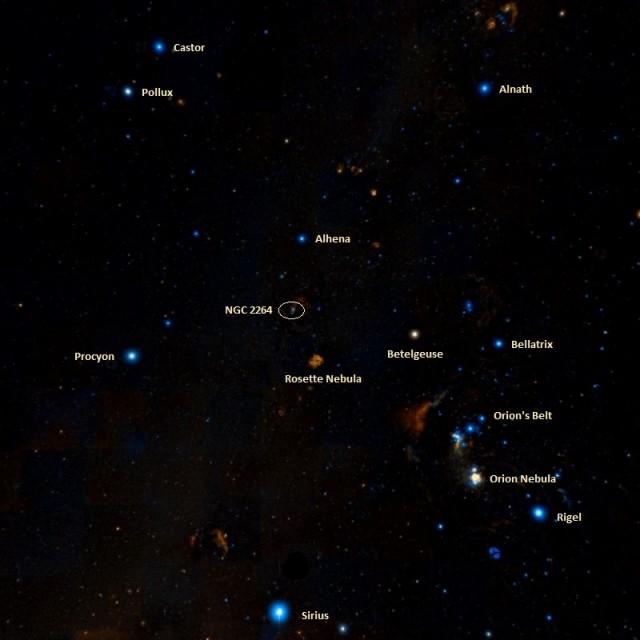 The giant pillar of gas and dust was named for its conical shape, which is a result of a dark nebula absorbing the light of an emission nebula that lies behind it. The faint emission nebula is illuminated by the star S Monocerotis, the brightest member of the NGC 2264 cluster. S Monocerotis (15 Monocerotis) is a massive variable star system that lies at the base of the Christmas Tree Cluster, believed to consist of up to eight components. 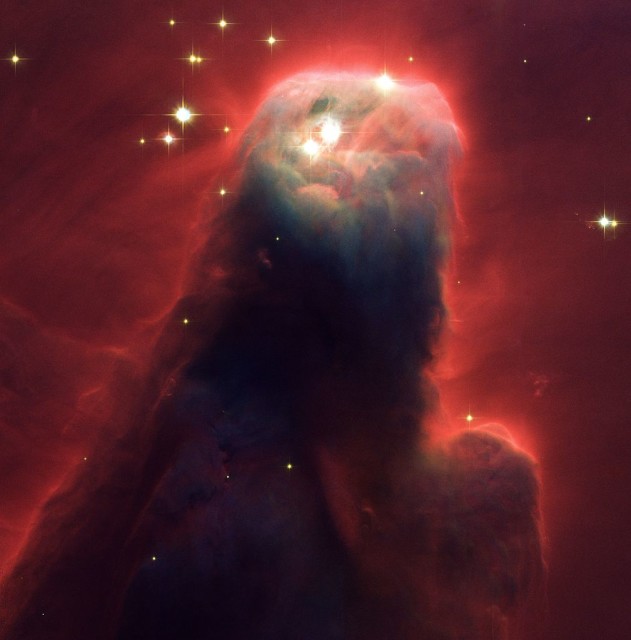 Resembling a nightmarish beast rearing its head from a crimson sea, this monstrous object is actually an innocuous pillar of gas and dust. Called the Cone Nebula (NGC 2264) — so named because, in ground-based images, it has a conical shape — this giant pillar resides in a turbulent star-forming region. This picture, taken by the newly installed Advanced Camera for Surveys (ACS) aboard NASA’s Hubble Space Telescope, shows the upper 2.5 light-years of the nebula, a height that equals 23 million roundtrips to the Moon. The entire nebula is 7 light-years long. The Cone Nebula resides 2,500 light-years away in the constellation Monoceros. Radiation from hot, young stars [located beyond the top of the image] has slowly eroded the nebula over millions of years. Ultraviolet light heats the edges of the dark cloud, releasing gas into the relatively empty region of surrounding space. There, additional ultraviolet radiation causes the hydrogen gas to glow, which produces the red halo of light seen around the pillar. A similar process occurs on a much smaller scale to gas surrounding a single star, forming the bow-shaped arc seen near the upper left side of the Cone. This arc, seen previously with the Hubble telescope, is 65 times larger than the diameter of our solar system. The blue-white light from surrounding stars is reflected by dust. Background stars can be seen peeking through the evaporating tendrils of gas, while the turbulent base is pockmarked with stars reddened by dust. Over time, only the densest regions of the Cone will be left. Inside these regions, stars and planets may form. Image: NASA, H. Ford (JHU), G. Illingworth (UCSC/LO), M.Clampin (STScI), G. Hartig (STScI), the ACS Science Team, and ESA. The ACS Science Team: H. Ford, G. Illingworth, M. Clampin, G. Hartig, T. Allen, K. Anderson, F. Bartko, N. Benitez, J. Blakeslee, R. Bouwens, T. Broadhurst, R. Brown, C. Burrows, D. Campbell, E. Cheng, N. Cross, P. Feldman, M. Franx, D. Golimowski, C. Gronwall, R. Kimble, J. Krist, M. Lesser, D. Magee, A. Martel, W. J. McCann, G. Meurer, G. Miley, M. Postman, P. Rosati, M. Sirianni, W. Sparks, P. Sullivan, H. Tran, Z. Tsvetanov, R. White, and R. Woodruff.

The Cone Nebula was likely formed by the wind from the massive star designated as NGC 2264 IRS. The radiation of the hot nearby stars illuminates and erodes the giant pillar of gas, while ultraviolet radiation is responsible for the pillar’s reddish glow.

The infrared source NGC 2264 IRS is embedded within the dust and gas of the nebula and cannot be seen by optical telescopes. Hubble images taken in infrared light have revealed that the massive young star is surrounded by six very young, pre-main sequence stars with a mass almost that of the Sun, all found within less than a tenth of a light year of NGC 2264 IRS. NGC 2264 IRS is also known as Allen’s Source, after the astronomer D.A. Allen, who pointed out in 1972 that the object is the likely source of the radiation pressure responsible for creating the shape of the Cone Nebula. 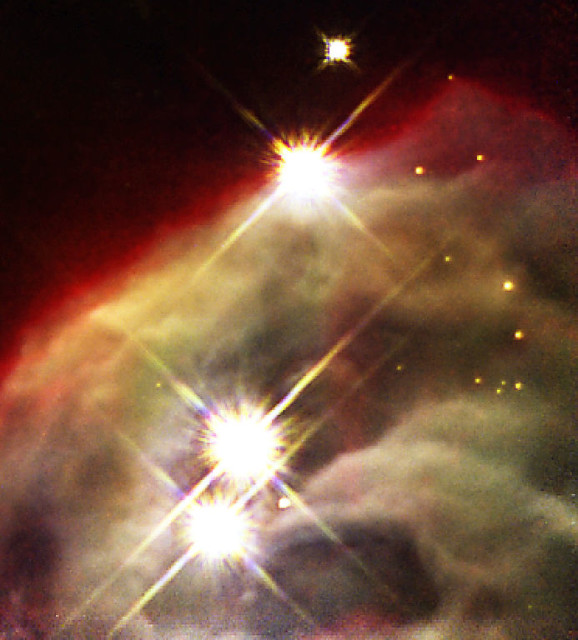 After astronauts repaired NICMOS – the Near Infrared Camera and Multi-Object Spectrometer – during the latest Hubble Space Telescope servicing mission, astronomers were quick to turn the sophisticated instrument on the photogenic stellar nursery known as the Cone Nebula. This remarkable NICMOS close-up of the Cone Nebula dramatically confirms that the Hubble’s infrared vision has been restored. Gas and dust clouds at the blunted tip of the cone-shaped star-forming region are seen here in false-color covering an area about half a light-year across. Toward the left hand side of the picture, the four bright stars with diffraction spikes are also present in visible light images and are in front of the Cone Nebula, itself 2,500 light-years away. But the fainter stars to their right are embedded in or behind the nebula’s obscuring dust clouds and are revealed only in this penetrating infrared view. Image: NICMOS Group (STScI, ESA), NICMOS Science Team (Univ. Arizona), NASA

The Cone Nebula resembles the better known Pillars of Creation, a star forming region made famous by the Hubble image in 1995, located in the Eagle Nebula (M16) in the constellation Serpens. Pillar structures like these, formed of cold gas, are common in large star forming regions and believed to be incubators for very young stars.

The Cone Nebula was discovered by the German-British astronomer William Herschel on December 26, 1785, almost two years after he had discovered the Christmas Tree Cluster. Herschel catalogued the nebula as H V.27. 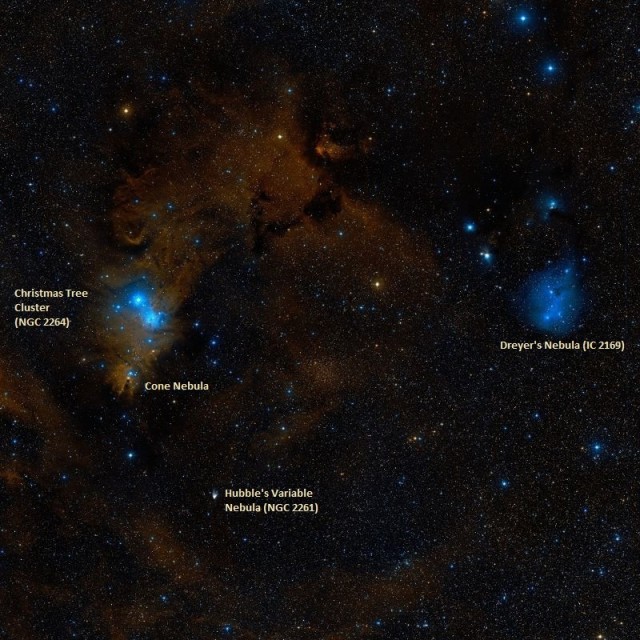 There are several notable objects located in the vicinity of the Cone Nebula. The reflection nebula IC 2169, also known as Dreyer’s Nebula, is detached from the Cone Nebula, but believed to be part of the same large molecular cloud. The nearby NGC 2261, or Hubble’s Variable Nebula, probably lies behind the Cone. It is a bipolar nebula about 3 years across, illuminated by the variable star R Monocerotis. Its name comes from the fact that, like the central star, the nebula varies in brightness. 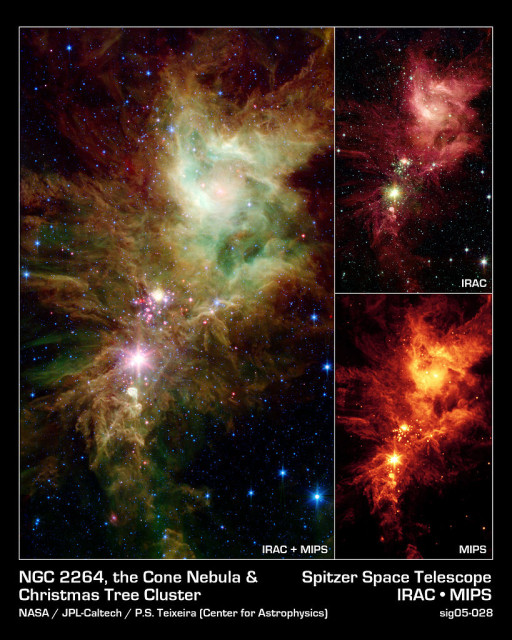 Newborn stars, hidden behind thick dust, are revealed in this image of a section of the Christmas Tree Cluster from NASA’s Spitzer Space Telescope, created in joint effort between Spitzer’s Infrared Array Camera (IRAC) and Multiband Imaging Photometer (MIPS) instruments. The newly revealed infant stars appear as pink and red specks toward the center of the combined IRAC-MIPS image (left panel). The stars appear to have formed in regularly spaced intervals along linear structures in a configuration that resembles the spokes of a wheel or the pattern of a snowflake. Hence, astronomers have nicknamed this the “Snowflake Cluster.”
Star-forming clouds like this one are dynamic and evolving structures. Since the stars trace the straight line pattern of spokes of a wheel, scientists believe that these are newborn stars, or “protostars.” At a mere 100,000 years old, these infant structures have yet to “crawl” away from their location of birth. Over time, the natural drifting motions of each star will break this order, and the snowflake design will be no more. While most of the visible-light stars that give the Christmas Tree Cluster its name and triangular shape do not shine brightly in Spitzer’s infrared eyes, all of the stars forming from this dusty cloud are considered part of the cluster.Like a dusty cosmic finger pointing up to the newborn clusters, Spitzer also illuminates the optically dark and dense Cone Nebula, the tip of which can be seen towards the bottom left corner of each image. Image: NASA/JPL-Caltech/P.S. Teixeira (Harvard-Smithsonian CfA)