The Rosette Nebula is an emission nebula, a large star forming region located in the constellation Monoceros, the Unicorn.

The nebula is a large cloud of gas and dust that lies near a large molecular cloud and is closely associated with the open cluster NGC 2244, whose stars were formed from the nebula’s matter in the last five million years.

The Rosette (or Rosetta) Nebula’s appearance in optical light resembles a rose flower or the rosette, the stylized flower design used in sculptural objects since ancient times, and the nebula was named after the design. The nebula has earned the nickname the Skull because it also closely resembles the human skull. 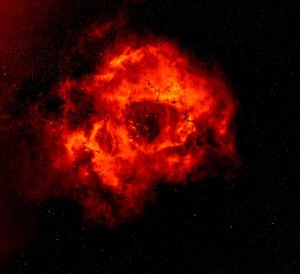 Rosette Nebula, image based on data obtained as part of the INT Photometric H-Alpha Survey of the Northern Galactic Plane, prepared by Nick Wright, University College London, on behalf of the IPHAS Collaboration

The open cluster NGC 2244 can be seen in binoculars, but to observe the nebula, one needs a telescope with a low magnification and very good viewing conditions, without light pollution. The nebula’s red colour cannot be seen, only recorded photographically.

The Rosette Nebula has an apparent magnitude of 9.0 and is approximately 5,200 light years distant from Earth.

It is about 65 light years in radius, significantly larger than the famous Orion Nebula (M42) in Orion, which is only 12 light in radius, but much closer to us (1,344 light years). The Rosette Nebula’s other designations are Caldwell 49, SH 2-275, and CTB 21.

The nebula is a region of intense star formation. The stellar winds from the young stars inside the nebula exert pressure on interstellar clouds and the compression leads to ongoing star forming activity in the nebula.

The Rosette Nebula contains very hot young stars in its central region. The gas surrounding these stars has a temperature of 6 million kelvins and as a result the stars emit intense amounts of X-ray radiation.

The Rosette Nebula and the cluster NGC 2244 are about 130 light years in diameter, which translates into more than a degree across, roughly five times the size of the full Moon.

The nebula’s estimated mass is about 10,000 solar masses, which makes the Rosette one of the more massive emission nebulae known.

The Rosette is lit by the young stars located within the nebulous region. The radiation from the stars causes the atoms in the nebula to emit radiation themselves, and as a result, the emission nebula is produced.

The Rosette Nebula was discovered piece by piece, as it is a difficult object to observe, even in larger telescopes. The English astronomer John Herschel found NGC 2239, the German Albert Marth discovered NGC 2238, and the American astronomer Lewis Swift was the first to observe NGC 2237 and NGC 2246.

NGC 2244 – This infrared image from NASA’s Spitzer Space Telescope shows the Rosette Nebula, a pretty star-forming region more than 5,000 light-years away in the constellation Monoceros. In optical light, the nebula looks like a rosebud, or the “rosette” adornments that date back to antiquity. But lurking inside this delicate cosmic rosebud are so-called planetary “danger zones” (see sphere illustrations). These zones surround super hot stars, called O-stars (blue stars inside spheres), which give off intense winds and radiation. Young, cooler stars that just happen to reside within one of these zones are in danger of having their dusty planet-forming materials stripped away. Image: NASA

NGC 2244 is an open star cluster located within the Rosette Nebula. It was discovered by the English astronomer John Flamsteed in 1690. He, however, could not see the nebula, which was not observed until much later.

The cluster has an apparent visual magnitude of 4.8 and is approximately 5,200 light years distant from Earth, at the same distance as the nebula. In good viewing conditions, the cluster can easily be seen even without binoculars.

NGC 2244 contains several extremely hot blue stars and the brightest stars in the cluster belong to the spectral class O4V, a rare class of super hot blue main sequence stars that are significantly hotter and more massive than the Sun.

The two brightest stars in NGC 2244 are 400,000/450,000 times more luminous than the Sun and roughly 50/60 times more massive. They emit large amounts of radiation and generate a strong stellar wind. As a result, the cooler stars that lie in the vicinity, within 1.6 light years (10 trillion miles), are in danger of having their potential planets destroyed and planet-forming dust and gas blown away.

The hot stars in the NGC 2244 cluster are also responsible for the central hole in the Rosette Nebula. The hole is a result of the stars’ radiation blasting away the gas. 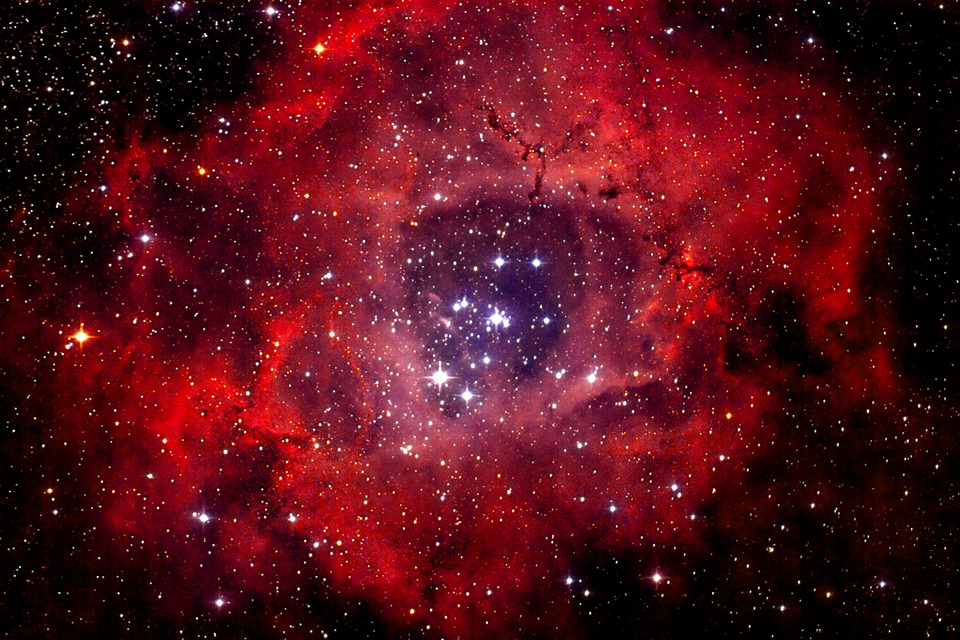 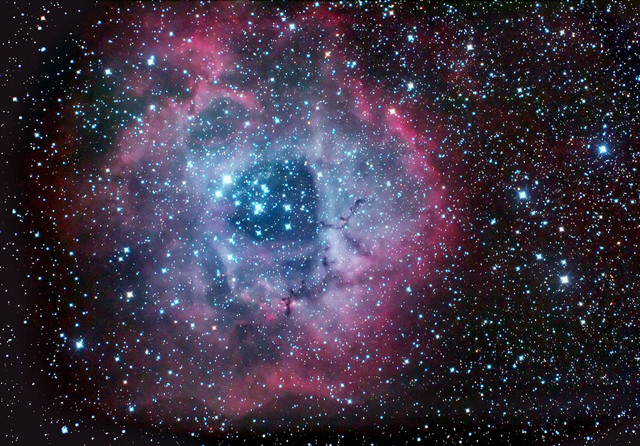 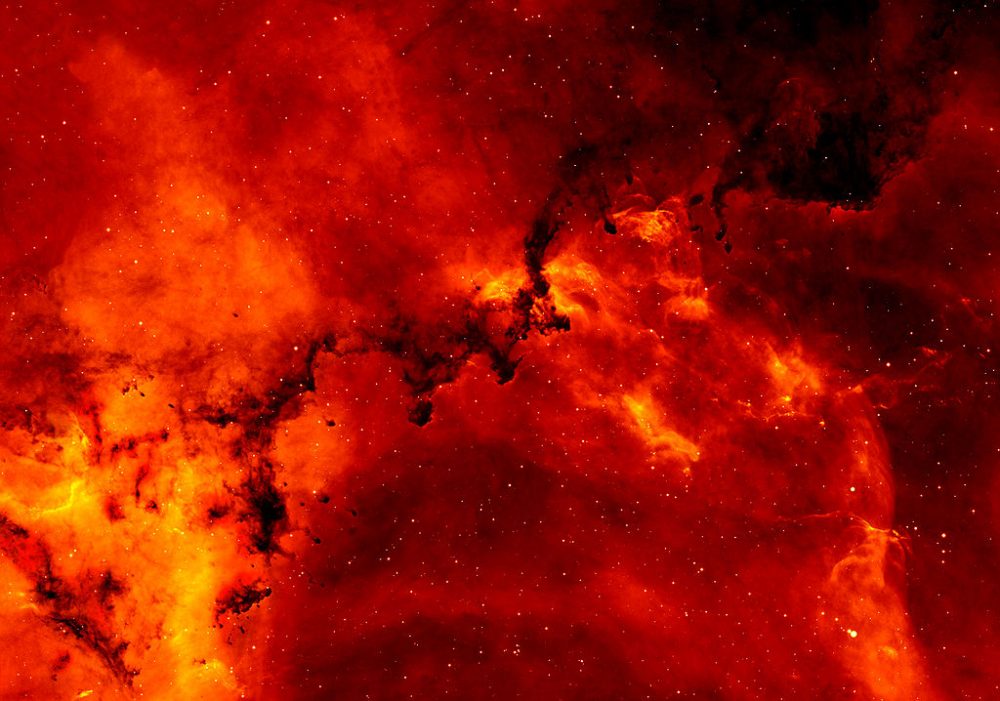 A close up view of the Rosette Nebula. The red color comes from hydrogen. Image based on data obtained as part of the INT Photometric H-Alpha Survey of the Northern Galactic Plane, prepared by Nick Wright, University College London, on behalf of the IPHAS Collaboration

This image from the Herschel Space Observatory shows most the cloud associated with the Rosette nebula, a stellar nursery about 5,000 light-years from Earth in the Monoceros, or Unicorn, constellation. Herschel collects the infrared light given out by dust. The bright smudges are dusty cocoons containing massive embryonic stars, which will grow up to 10 times the mass of our sun. The small spots near the center of the image are lower mass stellar embryos. The Rosette nebula itself, and its massive cluster of stars, is located to the right of the picture. This image is a three-color composite showing infrared wavelengths of 70 microns (blue), 160 microns (green), and 250 microns (red). It was made with observations from Herschel’s Photoconductor Array Camera and Spectrometer and the Spectral and Photometric Imaging Receiver instruments. Herschel is a European Space Agency cornerstone mission, with science instruments provided by consortia of European institutes and with important participation by NASA. NASA’s Herschel Project Office is based at NASA’s Jet Propulsion Laboratory. JPL contributed mission-enabling technology for two of Herschel’s three science instruments. The NASA Herschel Science Center, part of the Infrared Processing and Analysis Center at the California Institute of Technology in Pasadena, supports the United States astronomical community. Caltech manages JPL for NASA. Image: ESA and the PACS, SPIRE & HSC Consortia.