Praesepe, also known as Messier 44 (M44) or the Beehive Cluster, is a large, bright open star cluster located in the constellation Cancer.

It is the brightest deep sky object in the constellation. The cluster has the designation NGC 2632 in the New General Catalogue.

Messier 44 lies at a distance of about 577 light years from Earth. It is one of the nearest open star clusters to Earth. It contains more stars than the majority of other clusters that lie close to the solar system. Charles Messier included the object in his catalogue in 1769. The name Praesepe, pronounced [praɪˈsiːpɪ], comes from the Latin word meaning “manger” or “cradle.”

The Beehive Cluster contains about 1,000 stars. These are mostly young stars, with an approximate age of 600 million years. (For comparison, the Sun is 4.5 billion years old.) The bright central region of M44 has a diameter of about 22.8 light years, or 7 parsecs. 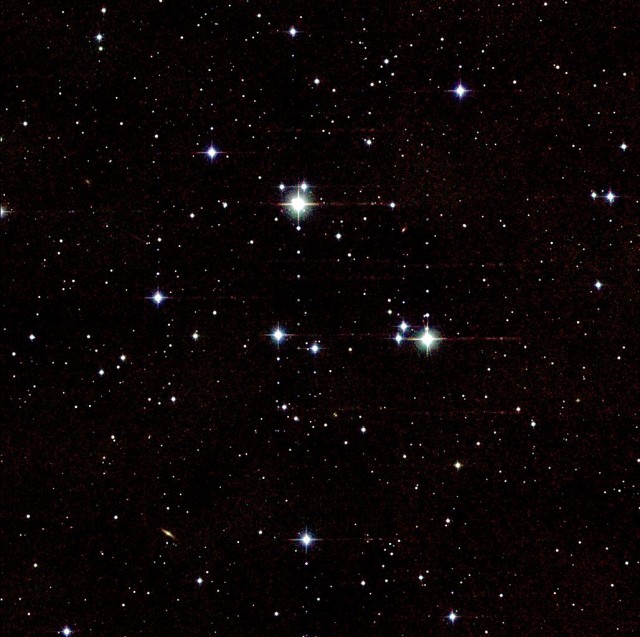 Praesepe: the open cluster Messier 44. Image: Two Micron All Sky Survey (2MASS), a joint project of the University of Massachusetts and the Infrared Processing and Analysis Center/California Institute of Technology, funded by the National Aeronautics and Space Administration and the National Science Foundation.

Messier 44 spans about 15 light years and covers an area corresponding to about three full moons, or 1.5 degrees in the sky. It is visible to the naked eye in good viewing conditions.

Praesepe is one of the brightest and largest objects of its kind found in the night sky, as well as one of the nearest.

Praesepe contains at least 1,000 stars which are gravitationally bound. The bright, massive stars are mostly concentrated in the central region and the fainter, less massive members are found in the cluster’s halo. The total mass of Messier 44 is estimated at 500 to 600 solar masses.

The brightest stars in the Beehive Cluster have an apparent magnitude of 6 to 6.5 and are blue-white in colour.

A recent survey of the cluster has revealed that 68 percent of its stars are M-class red dwarfs, around 2 percent are bright class A stars, and 30 percent are stars comparable to the Sun, belonging to spectral classes F, G and K. Praesepe also contains five giant stars. Four have the stellar classification K0 III and one, G0 III. Eleven white dwarfs, stars in the final stage of evolution, have been identified in the cluster. These stars originally belonged to the spectral class B.

The brightest star in Messier 44 is ε Cancri (Epsilon Cancri), a hot blue-white star belonging to the spectral class A, with an apparent magnitude of 6.3. 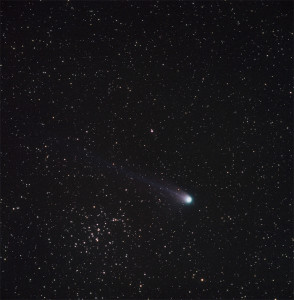 In 2004, a comet was observed in the direction of the Beehive Cluster. The Comet C/2001 Q4 NEAT, also known by its shorter names Comet Q4 and Comet NEAT, was not a regular visitor to the inner solar system. It was first discovered in 2002 and, on February 18, 2003, it was filmed being struck by a coronal mass ejection (CME), a solar eruption. In May 2004, the comet appeared to shoot through Messier 44 and then headed back to the outer solar system, where it will likely stay for the next 37,000 years.

Two planets were discovered orbiting Sun-like stars in M44 in September 2012. These were the first planets to be detected orbiting stars similar to our Sun found in a star cluster. The planets, designated Pr0201b and Pr0211b, are massive gas giants, or hot Jupiters, that orbit very close to their central stars, unlike Jupiter.

Praesepe lies in the direction of intergalactic space, away from the disc of the Milky Way. Most open clusters are found in near the galactic plane, within the galaxy’s spiral arms, and there are few of them that lie in the other direction. Other than the Beehive Cluster, the only open clusters found in this region are Messier 48 in Hydra constellation, Messier 67 in Cancer, and the Coma Berenices Star Cluster, or Melotte 111, located in Coma Berenices. M44 and M67 lie almost in the same line of sight, but M67 is about five times more distant from Earth.

The Beehive Cluster has been known since ancient times. The Greek astronomer Ptolemy described the object as “the nebulous mass in the breast of Cancer.” The philosopher Aratus of Soli called the cluster Achlus, meaning “little mist,” in his poem Phaenomena (260-270 B). In his Prognostica, Aratus described how the Greeks used Praesepe to forecast weather: “A murky manger with both stars [gamma and delta] shining unaltered is a sign of rain.” In other words, when rain clouds begin gathering in the sky, the two bright stars are still visible, but Praesepe is not.

The name Praesepe has been used since before Hipparchus’ time. Hipparchus included the object in the earliest known star catalogue around 129 BC. He called it Nephelion, meaning “little cloud.”

Ptolemy refers to the Beehive Cluster as one of seven “nebulae” in his Almagest (130 AD). Only four of these objects turned out to really be nebulae. 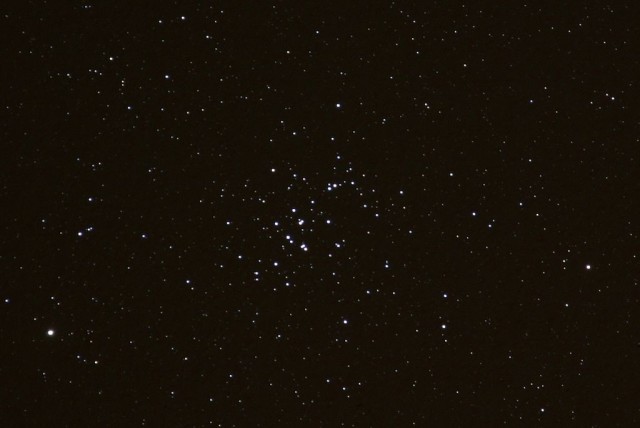 The Greeks knew the cluster as Phatne, which was translated into Latin as Praesepe. Both the Greeks and Romans saw the object as a “nebula” representing a manger with “Asselli” (donkeys) eating from it. The donkeys were marked by the stars Gamma Cancri, Asellus Borealis (the Northern Donkey) and Delta Cancri, Asellus Australis (the Southern Donkey). In mythology, these were the donkeys on which Dionysus and Silenius rode into battle when the Olympian gods were at war with the Titans. In the myth, the Olympians won the battle because the Titans were frightened by the donkeys’ braying. To commemorate the victory, the donkeys were placed in the sky along with Phatne.

The object later also got the name the Beehive Cluster, but this name is of uncertain origin.

M44 was also one of the first deep sky objects that Galileo observed with his telescope, in 1609. He was able to resolve about 40 stars, and reported, “the nebula called Praesepe, which is not one star only, but a mass of more than 40 small stars.”

The ancient Chinese skywatchers saw Praesepe as a demon or ghost riding in a carriage and compared it to a “cloud of pollen blown from a willow catkins.” The cluster was located in the Ghost (Gui Xiu), the 23rd lunar mansion of old Chinese astrology. The Chinese also knew M44 as Jishi qi oe Tseih She Ke, which means “the exhalation of piled-up corpses,” or simply as Jishi, “piled-up corpses.”

Charles Messier added Praesepe to his catalogue on March 4, 1769, after precisely measuring the cluster’s position in the sky. The inclusion of the cluster has been noted as curious because Messier mostly included objects that were fainter and more easily confused with comets. Praesepe, the Pleiades cluster in Taurus, and the Orion Nebula (Messier 42) in Orion are not likely to be confused for different kinds of objects as they are all quite easy to observe. It is possible that Messier simply wanted to have a more comprehensive catalogue of deep sky objects and added some well-known objects to the list.

Praesepe shares a number of similarities with the Hyades, the famous open star cluster in Taurus constellation. These include age and proper motion, which indicates that the two clusters may share a similar origin and may have been formed in the same molecular cloud. Both the Beehive Cluster and the Hyades contain white dwarfs and red giants, stars that are in the later stages of their life cycle, along with class A, F, G, K, and M-class main sequence stars.

In January 1996, the Beehive Cluster was selected to be the State Astronomical Symbol for Utah, the “Beehive State.” The beehive appears on the state’s flag and seal.

Recent observations of Messier 44 indicate that it may be two separate star clusters colliding with each other. Teams of astronomers at at Leicester University and Queen’s University Belfast noticed that the cluster had two distinct sub-clusters, with stars in one much older than those in the other. With an estimated age of 800 million years, the distribution of the stars in the cluster should have smoothed out by now. Analysis of the motion of stars also led the scientists to the conclusion that the cluster will fly apart in only 10 million years. The astronomers think that a collision between two clusters would provide the best explanation for this, and that the energy released by the collision is causing both sub-clusters to break up. 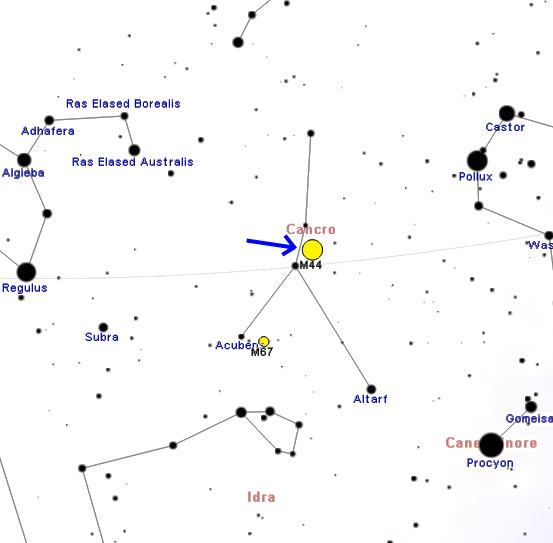 The M44 cluster is surrounded by an irregular rectangle formed by Asellus Australis or Delta Cancri (apparent magnitude of 3.9), Asellus Borealis or Gamma Cancri (4.7), Eta Cancri (5.3) and Theta Cancri (5.3). The two brighter stars can easily be seen without binoculars, but the other two are more difficult to spot.

With an apparent magnitude of 3.7, Messier 44 is brighter than these stars and can be seen without binoculars, but is best observed from areas with little to no light pollution. The cluster is very easy to see in small binoculars. In good conditions, it appears as a large patch of nebulosity to the naked eye, but no stars can be resolved without binoculars. The cluster is a superb target for binoculars and small telescopes, with a number of blue-white stars appearing in pairs of two and three, arranged in triangles and semi-circles, and at least four orange stars visible in a 3-inch telescope. In larger instruments, the cluster appears loose and some of its appeal is lost.

The best time of year to observe the Beehive Cluster is in the evening from February to May, when Cancer is high in the sky in northern latitudes.