The Hyades are a star cluster located in Taurus constellation and the nearest open cluster of stars to the solar system. Also catalogued as Collinder 50 or Melotte 25, the cluster has an apparent magnitude of 0.5 and lies at a distance of 153 light years, or 47 parsecs, from Earth.

The brightest stars in the Hyades cluster form a V shape that marks the head of the celestial bull. The cluster lies along the same line of sight as Aldebaran, the brightest star in Taurus, but the bright giant is not a member of the cluster and lies much closer to Earth. 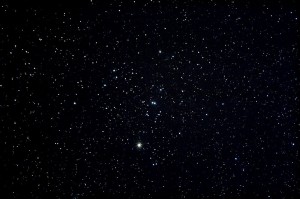 The Hyades are among the best studied clusters in the sky due to their brightness and proximity. The cluster contains hundreds of stars, a group slightly spherical in shape, that share a common origin, age, chemical composition, and motion through space.

The cluster is believed to be about 625 million years old. The dense core region has a diameter of 17.6 light years (2.7 parsecs) and the cluster itself has a tidal radius of 65 light years (10 parsecs). About a third of the stars in the Hyades cluster lie outside this area and are found in the cluster’s halo. These stars are confirmed members of the cluster, but are believed to be escaping from its tidal influence.

The Hyades are receding from us at 43 km/s. The cluster has a similar proper motion, age and metallicity as other groups of stars in the Sun’s neighbourhood. The Beehive Cluster, also known as Praesepe or Messier 44, is one of these stellar groups.

Praesepe is an open cluster located in the constellation Cancer and one of the more populated nearby clusters. It lies at an approximate distance of 577 light years from Earth. The trajectories of the Hyades and Praesepe clusters can be traced back to the same region, which suggests that the two share a common origin. The Hyades Stream (or moving group) is another  group of stars that shares a similar trajectory.

The Hyades cluster was catalogued by the Italian astronomer Giovanni Batista Hodierna in 1654 and by the British astronomer Philibert Jacques Melotte in 1915. However, the cluster has been known to different cultures since antiquity. Unlike Praesepe and the Pleiades, which are more distant, the Hyades cluster was not included in Charles Messier’s 1781 catalogue of deep sky objects. 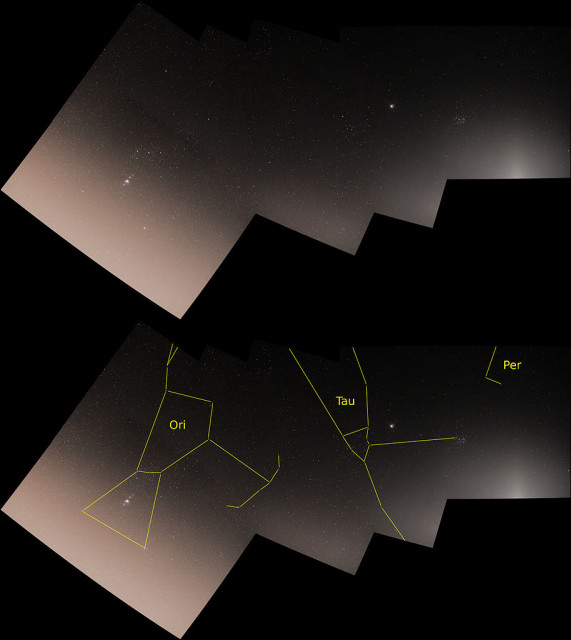 The Hyades are easy to find in the sky because of their distinctive V shape and proximity to Aldebaran, the bright star that anchors the celestial V.

Aldebaran can be located by following the line of the three stars that form Orion’s Belt westward. It is the first bright star that appears along this line.

Aldebaran is not related to the Hyades cluster, but appears as the brightest star in that direction and makes it easy to spot the V shape, formed by the cluster’s brightest members.

Of the cluster’s several hundred stars, about 15 are visible to the naked eye in good viewing conditions. Binoculars and small telescopes will reveal several dozen members. The best time of year to observe the Hyades from northern latitudes is in winter and spring.

The Hyades cluster has very few stars at both extremes of mass and its main sequence turn-off is about 2.3 solar masses. This indicates that the heavier stars in the cluster have evolved into giants, subgiants and white dwarfs. 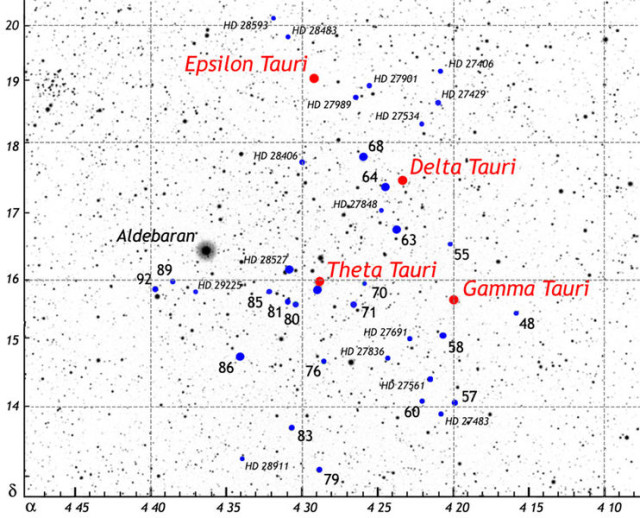 As most open clusters dissolve before they reach a billion years in age, the Hyades are expected to lose members and mass over the next few hundred million years until they are reduced to about a dozen star systems, which will eventually dissipate, too.

The five brightest stars in the Hyades cluster are Zeta-1 Tauri, Gamma Tauri, Delta-1 Tauri, Epsilon Tauri and Theta Tauri. Four of these stars – all but Zeta-1 Tauri – form the Bull’s head, an asterism that marks the head of Taurus, the Bull.

Gamma Tauri, also known as Hyadum I (the First Hyad), is a giant star belonging to the spectral class G8 or K8. It has a visual magnitude of 3.65 and lies about 2.5 parsecs from the cluster’s centre and approximately 154 light years from Earth. The star’s estimated age is in the range from 430 to 530 million years.

Delta-1 Tauri, or Hyadum II (the Second Hyad) is a triple star system with an apparent magnitude of 3.77, located 153 light years from Earth. It is also known as Eudora, which is the name of one of the Hyades sisters in Greek mythology.  The primary star in the system is an orange giant 74 times more luminous than the Sun and 11.6 times larger. 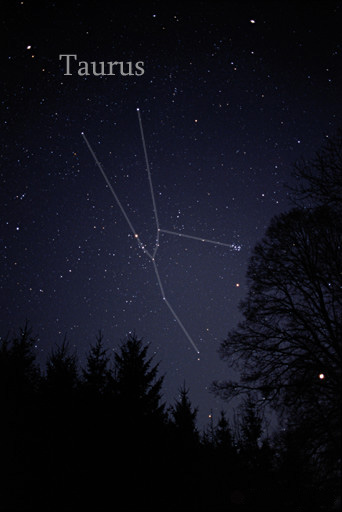 Epsilon Tauri, another orange giant, has the traditional name Ain, meaning the “Bull’s Eye,” and is the first star in any open cluster with a gas giant exoplanet candidate in its orbit, discovered in 2007. The star is also known as Oculus Borealis (Northern Eye).

Zeta Tauri is a binary system with an apparent magnitude of 3.0, located approximately 440 light years from Earth. The components in the system are orbiting too close to each other to be resolved with a telescope. The primary star has a mass more than 11 times that of the Sun and a stellar classification of B2 IIIpe, which means that it is a giant star showing emission lines in its spectrum, indicating a rotating circumstellar disk of gas. The nature of the companion is uncertain, but the star has about 94 percent of the Sun’s mass.

In Greek mythology, the Hyades were the five daughters of Atlas, the Titan who held up the celestial spheres, and Aethra, one of the Oceanids. They were half-sisters to the Hesperides and the Pleiades. The name Hyades means “the rainy ones.” 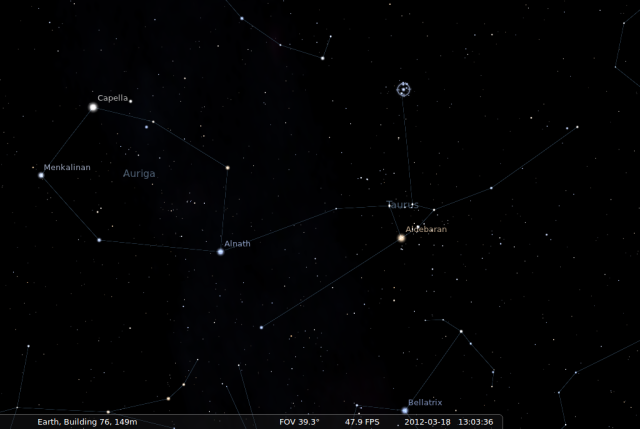 In the myth, the five nymphs were transformed into a star cluster after the death of their brother, Hyas, who was killed in a hunting accident. The sisters are said to be forever crying for Hyas. The cluster was later associated with rain. In England, it was known as the April Rainers. The Greeks believed that the cluster’s heliacal rising and setting marked the rainy seasons.

The number of sisters varies from three to 15, depending on the source, and their names are also variable and include Aesyle, Ambrosia, Cleeia, Coronis, Eudora, Pedile, Phaeote, Phyto and Polyxo.

The Hyades appear in many classical works, including those of Ovid, Pliny, Horace, Hyginus, Hesiod and Homer. In the Iliad, the cluster is represented on Achilles’ shield, along with the nearby Pleiades cluster and the constellations Orion and Ursa Major.