Algol, Beta Persei, is a bright multiple star located in Perseus. It is the second brightest star in the constellation, after Mirfak, Alpha Persei. The star is also known as Gorgona, Gorgonea Prima, Demon Star and El Ghoul. It lies at an approximate distance of 90 light years from Earth and has an apparent magnitude that varies between 2.12 and 3.4.

The name Algol comes from the Arabic phrase “raʾs al-ghūl,” meaning the “head of the ghoul” or “head of the demon.”  In Perseus, the star represents the head of the Gorgon Medusa, the mythical monster so horrific in appearance that merely looking at her would turn people to stone.

Algol is one of the best known variable stars in the sky and a prototype for a class of eclipsing variable stars known as Algol variables. It is a triple star system composed of Beta Persei Aa1, a B-class main sequence star, Beta Persei Aa2, an orange subgiant, and Beta Persei Ab, a dimmer A-class star. Beta Persei Aa1 and Aa2 form a binary pair. They are very close to each other (separated by only 0.06 astronomical units on average, or about 1/17 of the distance between the Earth and the Sun) and they revolve quite quickly. As they orbit each other, the stars pass in front of each other, causing eclipses.

Algol (β Persei) is a triple-star system (Algol A, B, and C) in the constellation Perseus, in which the large and bright primary Algol A is regularly eclipsed by the dimmer Algol B every 2.87 days. The eclipsing binary pair is separated by only 0.062 astronomical units (AU) from each other, so close in fact that Algol A is slowly consuming the less massive Algol B by continually stripping off Algol B’s outer layers. This animation was assembled from 55 images of the CHARA interferometer in the near-infrared H-band, sorted according to orbital phase. Because some phases are poorly covered, B jumps at some points along its path. The phase of each image is indicated at the lower left. The images vary in quality, but the best have a resolution of 0.5 milliarcseconds, or approximately 200 times better than the Hubble Space Telescope. (A milliarcsecond is about the size of a quarter atop the Eiffel Tower as seen from New York City.) Tidal distortions of Algol B giving it an elongated appearance are readily apparent. Tidal distortions also result in “gravity darkening” effects, whereby in a significant number of images of Algol B, the edge or “limb” of the image is actually brighter than the center. Image: Dr. Fabien Baron, Dept. of Astronomy, University of Michigan, Ann Arbor, MI 48109-1090

Algol’s brightness is usually at magnitude 2.1, with 10-hour long eclipses occurring every 2.867328 days (2 days, 20 hours and 49 minutes), when the fainter Beta Persei Aa2 passes in front of Beta Persei Aa1 and the system’s magnitude drops to 3.4. When the brighter component passes in front of the fainter one, a secondary eclipse occurs, but it cannot be detected visually, only photoelectrically. A third component, much fainter than the other two stars, was also detected in the system. It revolves around the main binary pair every 1.85 years.

Interpolation of the orbit of Aa2 around Aa1 with focus on Aa1.
Photos taken with the CHARA interferometer in the near-infrared H-band. Animation done on Mathematica by Simon Tyran (Yukterez, Vienna, 2.2.2016). Phases sorted by Stigmatella Aurantiaca.

A similar mechanism is at play in other types of eclipsing binary stars. What distinguishes Algol variables from, e.g. Beta Lyrae and W Ursae Majoris variables, is that Algol-type stars have a spherical or slightly ellipsoidal shape. Their components are not so close together as to cause deformations in shape, which is the case with the other two types.

Algol’s eclipses can be observed without a telescope. The star’s brightness can sometimes be seen falling and rising on the same night. Two nearby stars, Epsilon Persei (mag. 2.88) and Almach (mag 2.1) can be used for reference when watching the progress of the eclipses.

Observations of Algol led to the Algol paradox, which lay in the disparity between the mass and evolutionary stage of the two components of the eclipsing binary system.  Initially, the star system seemed to evolve in a manner that defied established beliefs about stellar evolution.

The studies of Algol challenged the theory that stars’ rate of evolution depends on their mass, meaning that, the greater the mass, the sooner the star will evolve off the main sequence. This does not appear to be happening with Algol.  Even though both components in the binary system formed at approximately the same time, the primary, more massive star in the system is still on the main sequence, while the less massive secondary component has evolved into a subgiant.

The Algol system as it appeared on 12 August 2009. This is not an artistic representation, but rather is a true two-dimensional image with 1/2 milli-arcsecond resolution in the near-infrared H-band, reconstructed from data of the CHARA interferometer. The elongated appearance of Algol B and the round appearance of Algol A are real. The form of Algol C, however, is an artifact. Image: Dr Fabien Baron, Dept. of Astronomy, University of Michigan, Ann Arbor, MI 48109-1090

The paradox is explained with mass transfer, a phenomenon that is not uncommon in close binary stars. The more evolved secondary component was not always the less massive one, but the flow of material between the stars disturbed the normal evolution process and the originally more massive star (in this case the subgiant) lost much of its mass to the companion (the main sequence star).

The 19th century French astronomer Édouard Roche was the first to explain the mechanics of accretion that occurs in close binary systems. Each star has a teardrop-shaped surrounding region, now called the Roche lobe, which contains orbiting material that is gravitationally bound to the star. The apex of the region points in the direction of the companion star. The Roche lobe represents the maximum a star can reach before it starts transferring material to the companion. When a star exceeds its Roche lobe, the material outside the lobe falls off into the companion star’s Roche lobe. Over time, the more massive and evolved star sheds much of its material, which is accreted by the companion, which then gradually becomes more massive.

Algol was one of the first non-nova variable stars ever discovered. The star has been known since ancient times. The oldest written record of its discovery – an Ancient Egyptian Calendar of Lucky and Unlucky Days – is about 3,200 years old.

The star has been associated with demons, violence and death across different cultures: ghouls in the Arabic world, the Gorgon in Greek mythology, and Rōsh ha Sāṭān (Satan’s Head) in Hebrew folklore. The star’s Latin name in the 16th century was Caput Larvae, meaning “the Spectre’s Head.”  Medieval astrologers considered Algol one of the unluckiest stars. It was one of the 15 Behenian stars, believed to be a source of astrological power and used in various rituals. 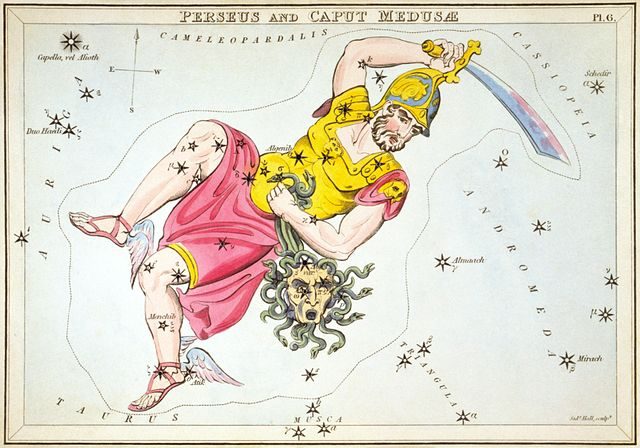 Perseus and Caput Medusæ, plate 6 in Urania’s Mirror, a set of celestial cards accompanied by A familiar treatise on astronomy … by Jehoshaphat Aspin. London. Astronomical chart showing Perseus holding bloody sword and the severed head of Medusa forming the constellation.

Algol currently lies at a distance of about 90 light years, but it was once much closer to the solar system. About 7.3 million years ago, it came within 9.8 light years of the Sun and shone at magnitude of about -2.5, which is much brighter than Sirius is today. (Sirius has an apparent magnitude of -1.46.) Algol’s proximity and mass may have caused an increase – albeit a small one – in the number of comets coming into the inner regions of the solar system.

Algol is relatively easy to find because it is located in the same area of the sky as Cassiopeia and the Great Square of Pegasus, between Cassiopeia’s W and the Pleiades. The bright stars of Cassiopeia can be used to star-hop to Mirfak, the brightest star in Perseus and the central star of the Alpha Persei Cluster, and then to Algol.

Mirfak lies along the imaginary line extended from Gamma to Delta Cassiopeiae, and forms a triangle with Algol and the bright Almach, Gamma Andromedae. Almach is the third star in the chain that leads from Alpheratz and the Great Square of Pegasus to Perseus. Mirach, the middle star in the chain, is used to find the Andromeda Galaxy (M31) and Triangulum Galaxy (M33). Other famous deep sky objects in this region include the California Nebula (NGC 1499) and the Heart and Soul nebulae (IC 1805 and IC 1848).

Algol is the best known variable star of its type, but there are countless other Algol variables known. In 2003, the General Catalogue of Variable Stars listed more than 3,500, which was 9% of all known variables.

Algol’s variability was first correctly explained by the English amateur astronomer John Goodricke in 1782, when he was only 18 years of age. After observing the star to determine the period of its light variations, he suggested that Algol was what we now know as an eclipsing binary, i.e. that it is periodically eclipsed by a dimmer companion of almost the same size as itself. Goodricke also discovered the periodic variation of Delta Cephei, the prototype for the Cepheid variable stars.