The Sombrero Galaxy, also known as Messier 104 (M104), is a famous unbarred spiral galaxy located in the southern skies. The galaxy lies at a distance of 29.3 million light years from Earth in the direction of the constellation Virgo. Its designation in the New General Catalogue is NGC 4594.

The Sombrero Galaxy is known for its appearance, similar to that of a Mexican hat, with a bright white core surrounded by thick lanes of dust and a halo of globular clusters and stars. The galaxy appears almost exactly edge-on when observed from Earth. 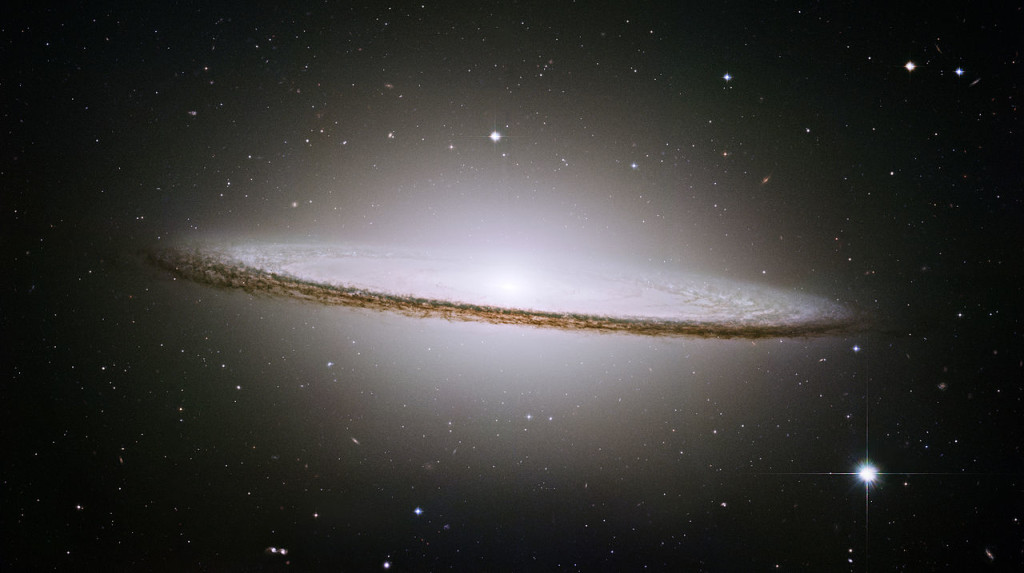 Sombrero Galaxy (Messier 104) – The galaxy’s hallmark is a brilliant white, bulbous core encircled by the thick dust lanes comprising the spiral structure of the galaxy. As seen from Earth, the galaxy is tilted nearly edge-on. We view it from just six degrees north of its equatorial plane. This brilliant galaxy was named the Sombrero because of its resemblance to the broad rim and high-topped Mexican hat. At a relatively bright magnitude of +8, M104 is just beyond the limit of naked-eye visibility and is easily seen through small telescopes. The galaxy is 50,000 light-years across and is located 28 million light-years from Earth. Hubble easily resolves M104’s rich system of globular clusters, estimated to be nearly 2,000 in number — 10 times as many as orbit our Milky Way galaxy. The ages of the clusters are similar to the clusters in the Milky Way, ranging from 10-13 billion years old. Embedded in the bright core of M104 is a smaller disk, which is tilted relative to the large disk. X-ray emission suggests that there is material falling into the compact core, where a 1-billion-solar-mass black hole resides. Image: NASA/ESA and The Hubble Heritage Team (STScI/AURA)

Messier 104 has an exceptionally large and prominent central bulge, which contains billions of very old stars that are responsible for the glow of the galaxy’s central region. The dust lanes contain a number of younger, brighter stars.

M104 is believed to contain a large black hole at its centre. The central region is quite bright across the electromagnetic spectrum. With an apparent visual magnitude of 8.98, the galaxy can’t be seen without binoculars, but it can easily be found in smaller telescopes.

The Sombrero Galaxy can be seen in 7×35 binoculars or a 4-inch telescope. The galaxy’s central bulge can be made out in a medium-sized telescope, and the dust lane is visible in larger telescopes, starting from 10-inch and 12-inch telescopes. To distinguish the galaxy’s bulge from the disk, one needs at least an 8-inch telescope.

Images from NASA’s Spitzer Space Telescope have revealed that Messier 104 has a significantly larger and more massive halo surrounding it than previously believed, which suggests that it might really be a giant elliptical galaxy.

In 2012, infrared images from Spitzer indicated that the Sombrero Galaxy is really two galaxies in one: a large elliptical galaxy with a thin disk galaxy embedded within.

The galaxy’s halo, seen glowing in visible light images, was revealed to be the right mass and size for a large elliptical galaxy. The discovery raised questions over the galaxy’s formation because what would usually be the most likely scenario – the giant elliptical galaxy swallowing the smaller spiral galaxy – does not make sense here because the smaller galaxy’s disk would most likely not have survived the collision.

Another theory suggests that a cloud of dust was drawn in by the gravity of the elliptical galaxy, and formed a spinning disk around the galaxy’s centre.

The Sombrero Galaxy is believed to be similar to Centaurus A, another elliptical galaxy with an embedded disk inside it, located in Centaurus constellation.

The Sombrero Galaxy was discovered by the French astronomer Pierre Méchain on May 11, 1781. Charles Messier did not include the galaxy in his original catalogue, but it was one of the six objects he noted that were later added to the list of Messier objects.

Messier 104 was added to the Messier Catalogue in 1921 by the French astronomer and author Camille Flammarion. He discovered Messier’s notes about the galaxy, which was identified with NGC 4594 in the New General Catalogue, and suggested that the object be included on the list of Messier objects.

The galaxy was independently discovered by the German-British astronomer William Herschel in 1784, who noted the “dark stratum,” or dust lane, in the galaxy’s disk.

The dust lane in M104 is composed mainly of dust and hydrogen gas. It is the main site of star formation within the galaxy, and contains most of the galaxy’s cold molecular gas.

The galaxy has a mass of approximately 800 billion suns. It contains almost 2,000 globular clusters, which is 10 times as many as those orbiting the Milky Way. The clusters are believed to be between 10 and 13 billion years old, roughly the same age as those orbiting our galaxy.

Messier 104 is moving away from us at the speed of more than 1,000 kilometres per second. The galaxy’s recession speed was first measured in 1912. At the time, it was the largest redshift ever measured and one of the first indicators that the Universe was expanding.

The galaxy’s nucleus is classified as a low ionization nuclear emission region (LINER), and an unlikely site for any significant star forming activity.

The Sombrero Galaxy is believed to belong to a group of galaxies that include NGC 4504, NGC 4487, NGC 4802, UGCA 289, and possibly several other galaxies.

The supermassive black hole at the centre of Messier 104 was discovered by a team led by John Kormendy in the 1990s. They used information obtained from the Hubble Space Telescope and the Canada France Hawaii Telescope to demonstrate that the stars near the galaxy’s centre could not maintain their speed of revolution unless the centre contained a mass equal to that of a billion suns.

The Sombrero Galaxy is located in Virgo constellation, at the southern edge of the Virgo Cluster, approximately 29.3 million light years from Earth. It is about 50,000-60,000 light years across, which makes it slightly smaller than the Milky Way Galaxy.

The galaxy can be found 11.5 degrees to the west of the bright star Spica and 5.5 degrees to the northeast of Eta Corvi in Corvus constellation. It lies near the border between Virgo and Corvus. 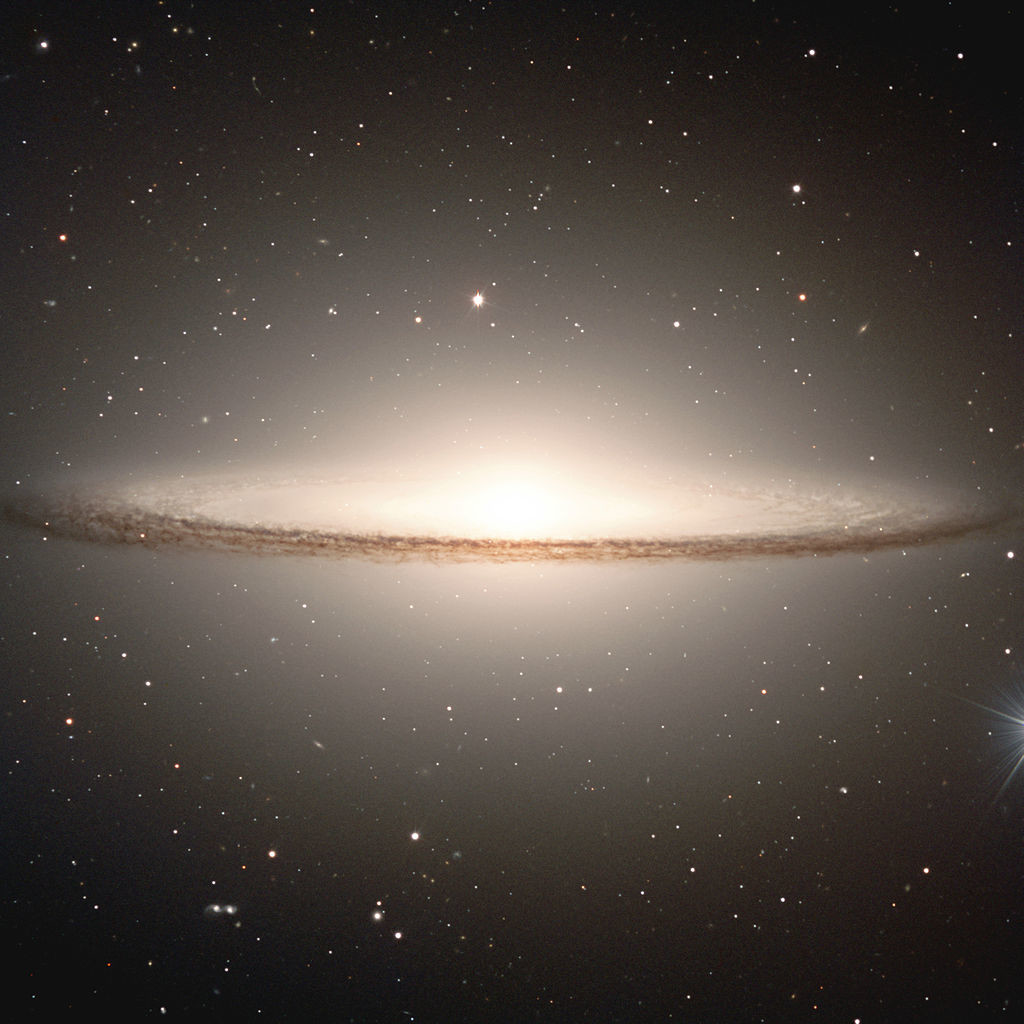 Image of the famous early-type spiral galaxy Messier 104, widely known as the “Sombrero” (the Mexican hat) because of its particular shape. The “Sombrero” is located in the constellation Virgo (The Virgin), at a distance of about 50 million light-years. Image: ESO 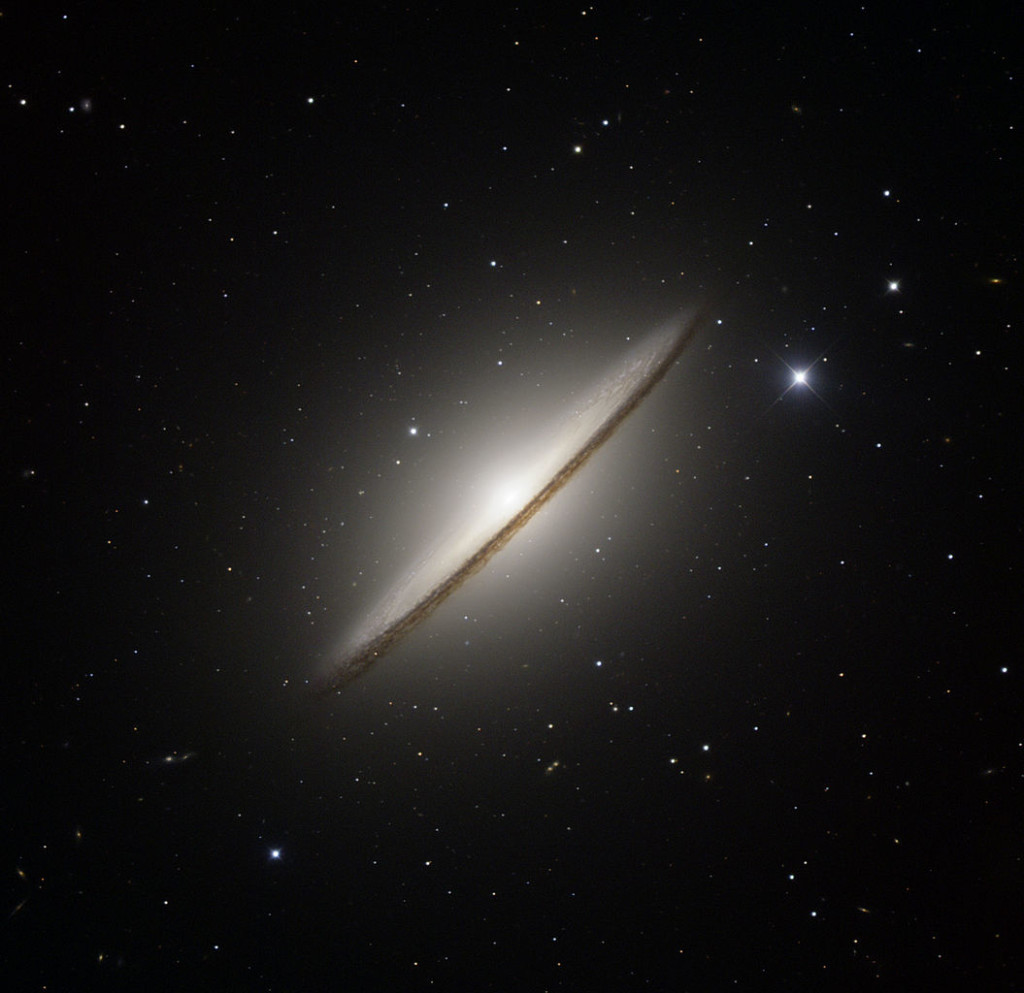 One of most famous spiral galaxies is Messier 104, widely known as the “Sombrero” (the Mexican hat) because of its particular shape. It is located towards the constellation Virgo (the ‘virgin’), at a distance of about 30 million light-years and is the 104th object in the famous catalogue of deep-sky objects by French astronomer Charles Messier (1730 – 1817). This luminous and massive galaxy has a total mass of about 800 billion suns, and is notable for its dominant nuclear bulge, composed mainly of mature stars, and its nearly edge-on disc composed of stars, gas, and dust. The complexity of this dust is apparent directly in front of the bright nucleus, but is also evident in the dark absorbing lanes throughout the disc. A large number of small, diffuse objects can be seen as a swarm in the halo of Messier 104. Most of these are globular clusters, similar to those found in our own Milky Way, but Messier 104 has a much larger number of them. This galaxy also appears to host a supermassive black hole of about 1 billion solar masses, one of the most massive black holes measured in any nearby galaxy, and 250 times larger than the black hole in the Milky Way. Despite having such a massive black hole at its centre, the galaxy is rather quiet, implying that the black hole is on a very stringent diet. This image is based on data acquired with the 1.5 m Danish telescope at the ESO La Silla Observatory in Chile, through three filters (B: 120 s, V: 100 s, R: 100 s). Image: ESO/IDA/Danish 1.5 m/R. Gendler and J.-E. Ovaldsen 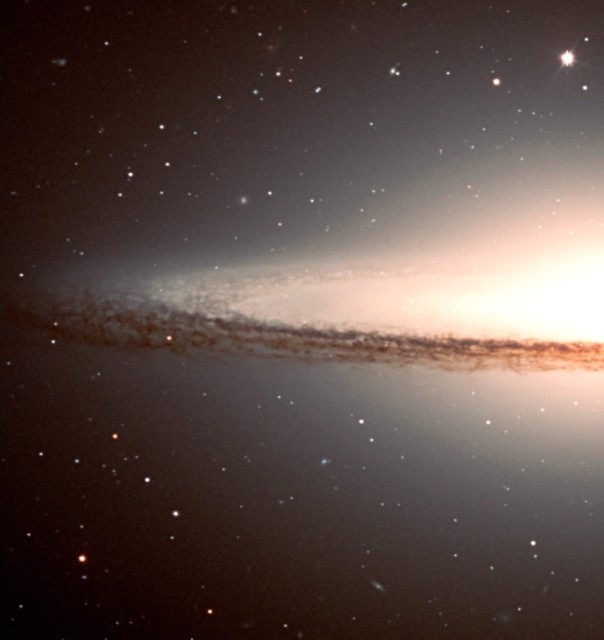 This is the eastern area of the Sombrero Galaxy, with the pronounced dust bands and many background galaxies. Image: ESO 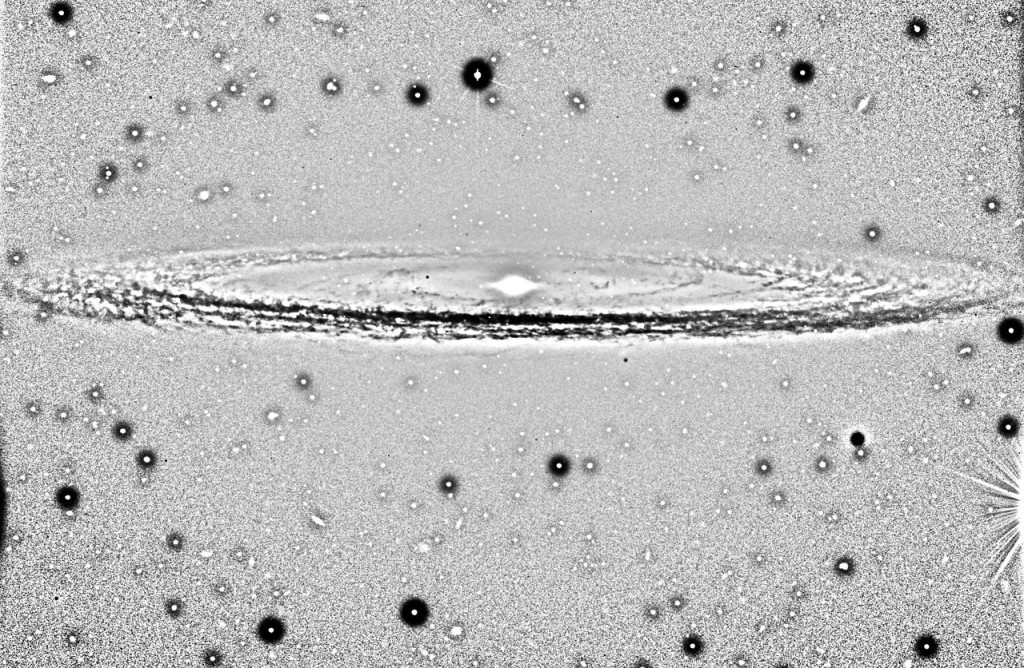 It is possible to follow the spiral structure of the Sombrero Galaxy almost all the way round. The dark areas around the stars and galaxies in the field are artefacts of the image processing. This galaxy is notable for its dominant nuclear bulge, composed primarily of mature stars, and its nearly edge-on disk composed of stars, gas, and intricately structured dust. The complexity of this dust, and the high resolution of this image, is most apparent directly in front of the bright nucleus, but is also very evident as dark absorbing lanes throughout the disk. A significant fraction of the galaxy disk is even visible on the far side of the source, despite its massive bulge. Technical information : The image has been processed to show the numerous dust bands in the central plane. It was made by dividing the V-band image by itself smoothed with a 2D gaussian profile (sigma: 10 pix); this removes the uniform areas and enhances the high spatial frequency features, e.g. the dust bands. Image processing by Mark Neeser (Kapteyn Institute, Groningen) and Richard Hook (ST/ECF, Garching, Germany). Image: ESO/P. Barthel 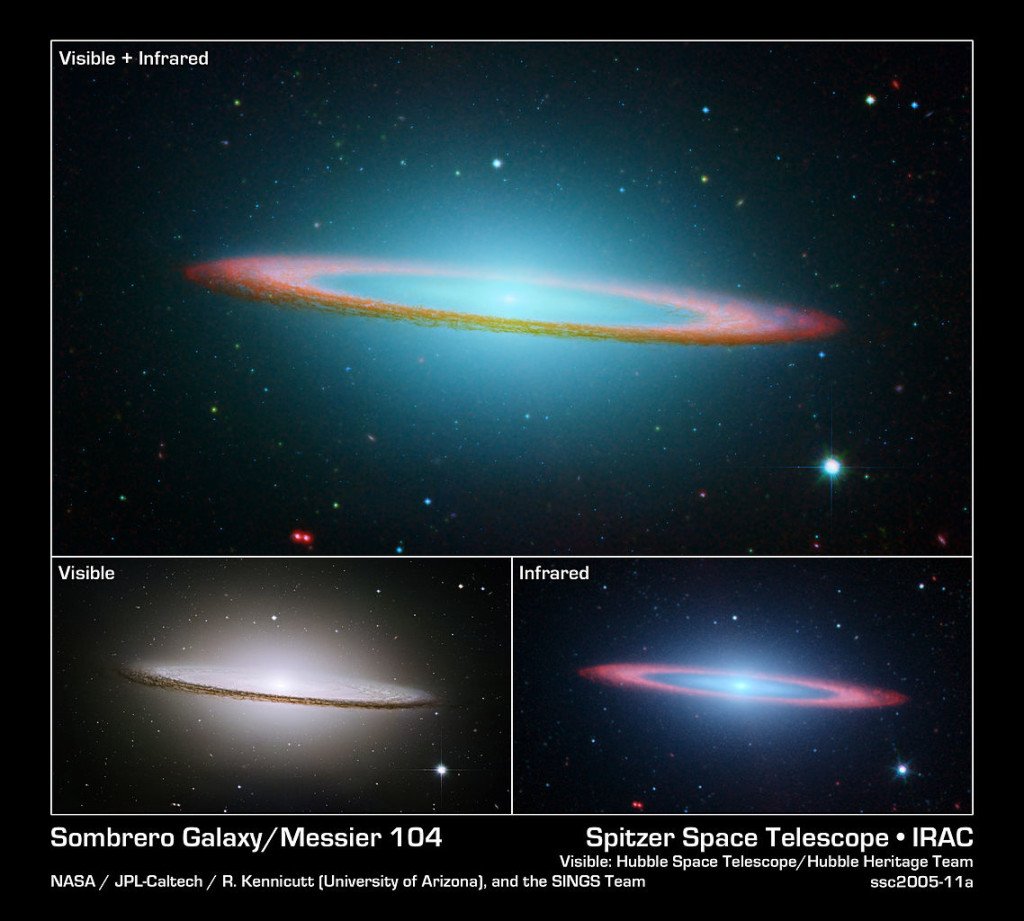 NASA’s Spitzer and Hubble Space Telescopes joined forces to create this striking composite image of one of the most popular sights in the universe. Messier 104 is commonly known as the Sombrero galaxy because in visible light, it resembles the broad-brimmed Mexican hat. However, in Spitzer’s striking infrared view, the galaxy looks more like a “bull’s eye.” In Hubble’s visible light image (lower left panel), only the near rim of dust can be clearly seen in silhouette. Recent observations using Spitzer’s infrared array camera (lower right panel) uncovered the bright, smooth ring of dust circling the galaxy, seen in red. Spitzer’s infrared view of the starlight, piercing through the obscuring dust, is easily seen, along with the bulge of stars and an otherwise hidden disk of stars within the dust ring. Spitzer’s full view shows the disk is warped, which is often the result of a gravitational encounter with another galaxy, and clumpy areas spotted in the far edges of the ring indicate young star-forming regions. The Sombrero galaxy is located some 28 million light-years away. Viewed from Earth, it is just six degrees south of its equatorial plane. Spitzer detected infrared emission not only from the ring, but from the center of the galaxy too, where there is a huge black hole, believed to be a billion times more massive than our Sun. The Spitzer picture is composed of four images taken at 3.6 (blue), 4.5 (green), 5.8 (orange), and 8.0 (red) microns. The contribution from starlight (measured at 3.6 microns) has been subtracted from the 5.8 and 8-micron images to enhance the visibility of the dust features. The Hubble Heritage Team took these observations in May-June 2003 with the space telescope’s Advanced Camera for Surveys. Images were taken in three filters (red, green, and blue) to yield a natural-color image. The team took six pictures of the galaxy and then stitched them together to create the final composite image. This magnificent galaxy has a diameter that is nearly one-fifth the diameter of the full Moon. Infrared image: NASA/JPL-Caltech/R. Kennicutt (University of Arizona) and the SINGS Team