Like the nearby Arches Cluster, it cannot be observed visually because it is obscured by dust clouds, but must be studied in infrared, radio and X-ray wavelengths. The cluster is located 12 arc minutes to the northwest of Sagittarius A*. 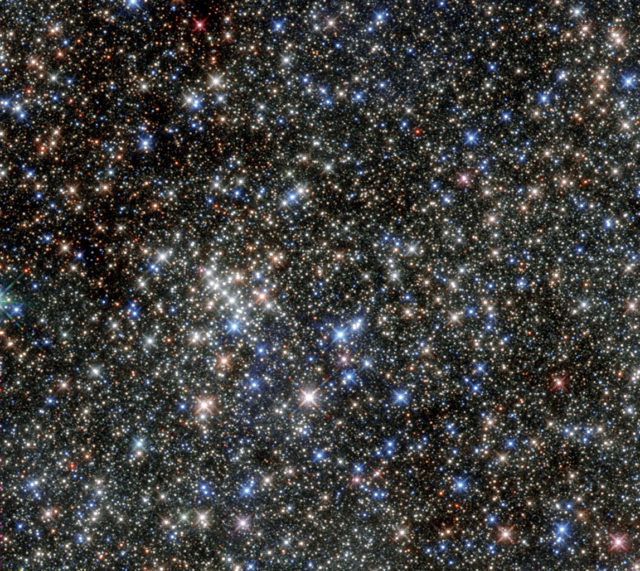 The Quintuplet Cluster hosts two extremely rare luminous blue variable stars: the Pistol Star and the lesser known V4650 Sgr. If you were to draw a line horizontally through the centre of this image from left to right, you could see the Pistol Star hovering just above the line about one third of the way along it. The Pistol Star is one of the most luminous known stars in the Milky Way and takes its name from the shape of the Pistol Nebula that it illuminates, but which is not visible in this infrared image. The exact age and future of the Pistol Star are uncertain, but it is expected to end in a supernova or even a hypernova in one to three million years. The cluster also contains a number of red supergiants. These stars are among the largest in the galaxy and are burning their fuel at an incredible speed, meaning they will have a very short lifetime. Their presence suggests an average cluster age of nearly four million years. At the moment these stars are on the verge of exploding as supernovae. During their spectacular deaths they will release vast amounts of energy which, in turn, will heat the material — dust and gas — between the other stars. This observation shows the Quintuplet Cluster in the infrared and demonstrates the leap in Hubble’s performance since its 1999 image of same object. Image: ESA/Hubble & NASA, 2015

The Quintuplet Cluster was named for the five prominent infrared sources that it contains. The cluster was first detected in 1983 as a pair of infrared sources, which were designated GCS-3 and GCS-4 (Galactic Centre Source 3 and 4). GCS-3 was later resolved into four separate sources that, together with GCS-4, formed a quintuplet. The cluster itself was discovered in 1990, when infrared observations allowed researchers to see it through the obscuring dust near the Galactic centre. The objects were believed to be hot, luminous young stars. The first five stars discovered, still believed to be protostars, were labelled Q1, Q2, Q3, Q4 and Q9. The stars Q5 and Q6 were later identified as members of the same cluster.

Observations in 1994 indicated that the stars were more evolved than originally believed. Researchers discovered broad helium emission lines in the stars’ spectra. Two of the stars were classified as Wolf-Rayet stars, one as a luminous blue variable (which was thought to be one of the most luminous stars in the Milky Way at the time), and several were identified as red supergiants. The supergiants are some of the largest stars in the Milky Way and are expected to go through their supply of fuel quickly and have a very short lifetime.

The Galactic core is obscured in visible light by intervening dust clouds, but infra-red light penetrates the dust. NICMOS shows a large number of these massive stars distributed throughout the region. A new finding is that astronomers now see that the massive stars are not confined to one of the three known clusters of massive stars in the Galactic Centre, known as the Central cluster, the Arches cluster, and the Quintuplet cluster. These three clusters are easily seen as tight concentrations of bright, massive stars in the NICMOS image. The distributed stars may have formed in isolation, or they may have originated in clusters that have been disrupted by strong gravitational tidal forces. The winds and radiation from these stars form the complex structures seen in the core, and in some cases, they may be triggering new generations of stars. Image – Hubble: NASA, ESA, and Q.D. Wang (University of Massachusetts, Amherst); Spitzer: NASA, Jet Propulsion Laboratory, and S. Stolovy (Spitzer Science Center/Caltech)

A study of almost 600 stars in the cluster conducted in 1999 revealed that the Quintuplet had another luminous blue variable, as well as more Wolf-Rayet stars than any other cluster discovered to date.

The Quintuplet Cluster is less dense than the Arches Cluster and contains fewer extremely massive and luminous stars. It is also slightly older than its neighbour, as indicated by the number of red supergiants in the cluster. The Quintuplet has an estimated age of 4 million years.

The Quintuplet Cluster is home to several luminous blue variables (LBV), including the famous Pistol Star and the less well-known V4650 Sagittarii (qF362). These stars are expected to end their lives in supernova explosions within the next 3 million years. They are among the most luminous stars known. 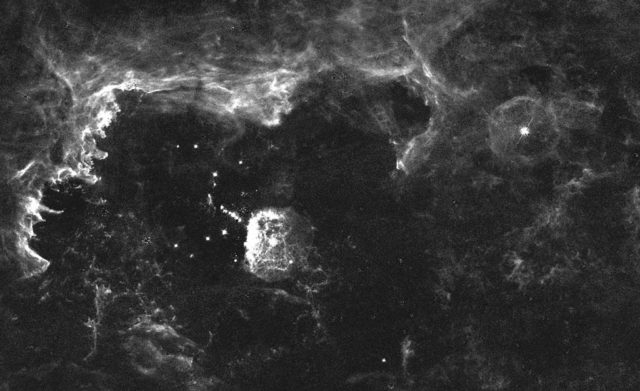 Hubble Space Telescope image of the Quintuplet Cluster region. The Pistol Star is seen in the middle, surrounded by its ejection nebula. The luminous blue variable (LBV) star G0.120−0.048 is at the upper right, surrounded by a spherical nebula, believed to have been ejected by that star. LBV qF362 to the left of the Pistol Star also seems to be surrounded by a low-level nebular emission. Image: NASA/ESA, Hubble 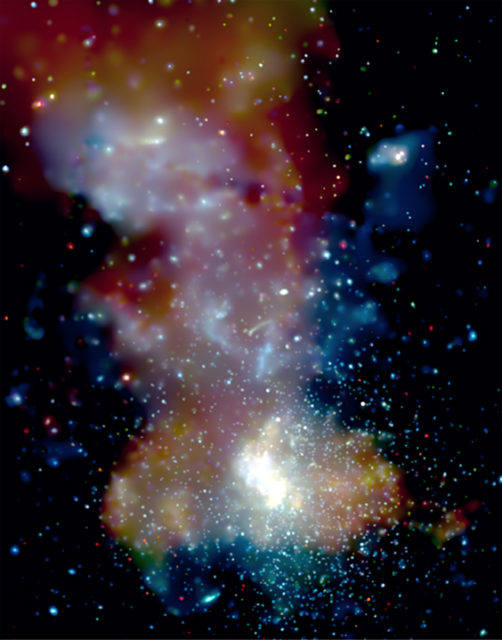 The clusters, Arches (upper right), Quintuplet (upper center), and the GC cluster (bottom center), contain massive stars that appear as very bright, point-like X-ray sources when winds from their surfaces collide with those from an orbiting companion. Vast amounts of energy are also released when these stars explode as supernovas, heating the surrounding material. Stellar corpses in this image also emit X-rays as either neutron stars or black holes in binary systems. Collisions between the clusters themselves and cooler molecular clouds of gas contribute to the diffuse X-rays seen in this image. Image: Chandra X-ray Observatory. NASA/CXC/UMass Amherst/Q.D.Wang et al. Smithsonian Institution @ Flickr Commons

The Quintuplet Cluster is associated with the Sickle Nebula, an H II region that resembles the Pillars of Creation in Messier 16 (Eagle Nebula).

Named for its arc-like appearance, the Sickle Nebula contains fingers of ionized gas that are illuminated by the extremely hot stars in the cluster. The fingers are shaped by the strong stellar winds and radiation from the massive stars.

The Quintuplet Cluster is believed to be physically associated with the Galactic centre because the stars and other objects, including the Pistol Nebula, have large radial velocities, likely as a result of orbiting so close to the Milky Way centre.

The cluster will be torn apart by the gravitational tidal forces in the galaxy’s core in a few million years. 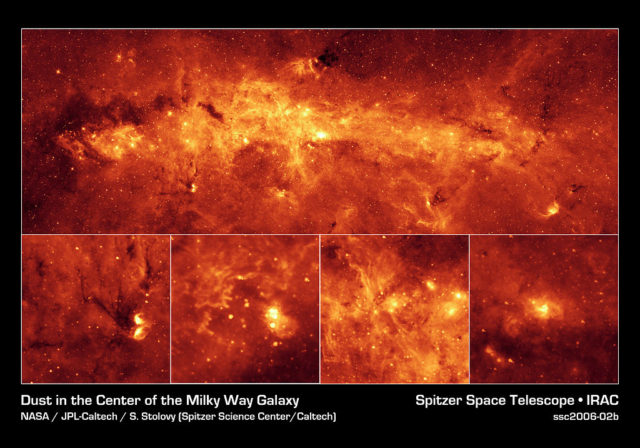 The VISTA infrared view of the region of the Galactic Center is scanned in fine detail in this pan. The huge numbers of stars in the image are clearly seen in close-up. We start in a dense star-cloud, pass over a small knot of nebulosity buried deep in the dust and then close in on the centre of the Milky Way itself and two brilliant clusters, the Arches Cluster and the Quintuplet Cluster.