Proxima Centauri, also known as Alpha Centauri C, is the closest star to Earth. It is located in the constellation Centaurus.

The star lies at a distance of only 4.243 light years from Earth. The name Proxima means “next to” or “nearest to” in Latin. Proxima’s distance to the second and third closest stars to the Sun, Alpha Centauri A and Alpha Centauri B, is 0.237 ± 0.011 light years.

Proxima Centauri is very likely the third component of the Alpha Centauri system, but the star’s orbital period may be more than 500,000 years.

Proxima Centauri is a red dwarf, too faint to be seen with the naked eye. It has an apparent magnitude of 11.05. It was discovered by the Scottish astronomer Robert Innes in 1915.

The star is classified as a flare star, which means that it is a variable star that randomly undergoes sudden increases in brightness as a result of magnetic activity. The star’s flare activity produces X-ray emission similar to the Sun’s.

Proxima Centauri has a mass only about an eighth of the Sun’s and a diameter a seventh that of the Sun.

The star produces energy at a relatively low rate and will likely stay on the main sequence for another four trillion years, which is about 300 times the age of the universe (13.8 billion years). 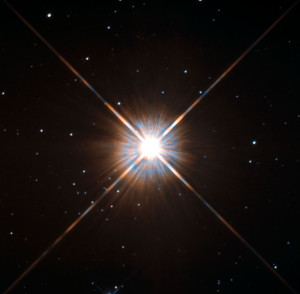 Shining brightly in this Hubble image is our closest stellar neighbour: Proxima Centauri.
Proxima Centauri lies in the constellation of Centaurus (The Centaur), just over four light-years from Earth. Although it looks bright through the eye of Hubble, as you might expect from the nearest star to the Solar System, Proxima Centauri is not visible to the naked eye. Its average luminosity is very low, and it is quite small compared to other stars, at only about an eighth of the mass of the Sun. However, on occasion, its brightness increases. Proxima is what is known as a “flare star”, meaning that convection processes within the star’s body make it prone to random and dramatic changes in brightness. The convection processes not only trigger brilliant bursts of starlight but, combined with other factors, mean that Proxima Centauri is in for a very long life. Astronomers predict that this star will remain middle-aged — or a “main sequence” star in astronomical terms — for another four trillion years, some 300 times the age of the current Universe. These observations were taken using Hubble’s Wide Field and Planetary Camera 2 (WFPC2). Proxima Centauri is actually part of a triple star system — its two companions, Alpha Centauri A and B, lie out of frame. Although by cosmic standards it is a close neighbour, Proxima Centauri remains a point-like object even using Hubble’s eagle-eyed vision, hinting at the vast scale of the Universe around us. Image: ESA/Hubble & NASA

Proxima will likely eventually become smaller and hotter, and eventually change in colour from red to blue. Its luminosity will likely increase at this point, reaching 2.5 percent of the Sun’s luminosity. Once it exhausts is supply of hydrogen fuel, Proxima will evolve into a white dwarf.

Proxima Centauri can only be seen south of latitude 27°N. With an apparent magnitude of 11.05, it is is much too faint to be seen with the naked eye. It is in fact so faint that it would appear as a fifth magnitude star when observed from Alpha Centauri A or B.

To view the star, one needs a telescope with an aperture of at least 3.1 inches (8 cm) and excellent viewing conditions, with no light pollution and the star high up in the sky. The star’s name is pronounced /ˈprɒksɪmə sɛnˈtɔriː/.

Proxima Centauri has been the closest star to the Sun for the last 32,000 years and will continue to the the nearest star for approximately 33,000 years. At that point, Ross 248 (HH Andromedae), a small red dwarf star located in Andromeda constellation, will take over. Ross 248 is currently only the 10th closest star to Earth.

For observers in northern latitudes, the nearest visible star to the Sun is Barnard’s Star, a red dwarf located in the constellation Ophiuchus. To view it, one also needs a telescope because it is too faint to be seen with the naked eye.

The closest naked eye star is Sirius in Canis Major, at a distance of 8.6 light years. Sirius is only the fifth nearest star system to Earth, after Alpha Centauri, Barnard’s Star (5.9 light years), Wolf 359 in Leo (7.8 light years), and Lalande 21185 in Ursa Major (8.3 light years). 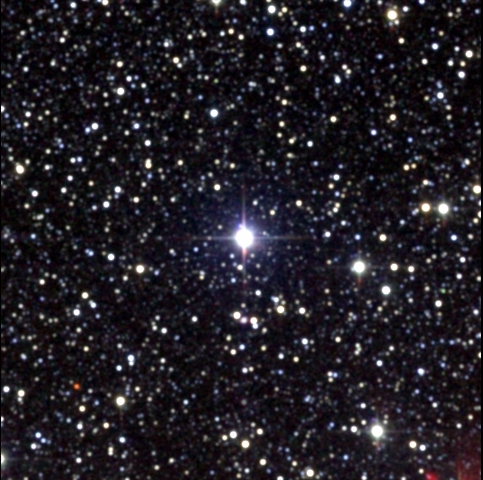 Proxima Centauri, the closest star to Earth other than the Sun, as seen by 2MASS. Atlas Image mosaic obtained as part of the Two Micron All Sky Survey (2MASS), a joint project of the University of Massachusetts and the Infrared Processing and Analysis Center/California Institute of Technology, funded by the National Aeronautics and Space Administration and the National Science Foundation.

To illustrate what this means from our perspective: the Voyager 1 spacecraft is currently travelling away from Earth at a speed of 17.3 kilometres (38.1 miles) per second, much faster than bullet speed. If it were to travel to Proxima Centauri, it would take more than 73,000 years for it to get there. If the spacecraft could travel at the speed of light, it would still take 4.22 years for it to arrive.

The distance to Proxima Centauri was calculated using the parallax method. Astronomers measured the star’s position with respect to other, more distant stars behind it, and then measured it again six months later when the Earth was on the other side of its orbit. As the star is so close to Earth, a measureable parallax can be seen: the star’s position relative to the background stars shifts. It is a very small shift, less than an arcsecond, but a measurable one.

Even though Proxima Centauri is the closest known star to Earth, there may still be undetected sub-stellar brown dwarfs lying closer.

The search for possible planets orbiting Proxima Centauri has ruled out any super-Earths, supermassive planets, and brown dwarfs in the star’s habitable zone. Being a flare star, Proxima Centauri may not be able to support life at all, as any planets in its habitable zone would be eroded by the star’s flare outbursts. Any smaller objects in its orbit may be detected with the proposed James Webb Space Telescope, the successor to Hubble and Spitzer, to be launched in October 2018.

Alpha and Proxima Centauri were among the “Tier 1” targets for NASA’s cancelled Space Interferometry Mission (SIM), which would likely have been able to detect planets with three Earth masses orbiting within 2 astronomical units of the stars.

Proxima Centauri was discovered by Robert Innes, the Director of the Union Observatory in Johannesburg, South Africa, in 1915. He discovered a star that shared a common proper motion with Alpha Centauri and suggested that it be named Proxima Centaurus. The name was later changed to the genitive Centauri. 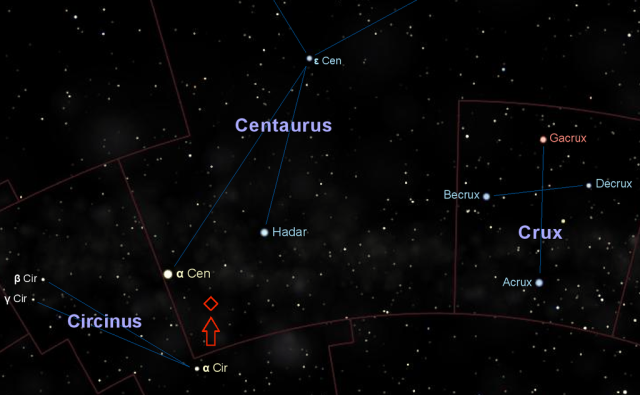 In 1917, the Dutch astronomer Joan Voûte used Proxima Centauri’s trigonometric parallax measurements and discovered that the star was roughly at the same distance from the Sun as the Alpha Centauri binary system. At the time, Proxima Centauri was the lowest-luminosity star known.

In 1928, the American astronomer Harold L. Alden used a similar method and determined that Proxima Centauri was closer, with a parallax of 0.783 ± 0.005″.

In 1951, American astronomer Harlow Shapley discovered that Proxima Centauri was a flare star. Comparing it to past photographic records revealed that it had a significant increase in magnitude, about 8 percent. This made Proxima the most active flare star known at the time. The star’s proximity allowed astronomers to make detailed observations of its flare activity. Most X-ray observatories have studied the star’s emissions of flares over the years.

Proxima Centauri has the stellar classification M5.5, which means that it is a late red dwarf, falling to the low-mass extreme of class M stars. Because of its low mass, the star’s interior is convective, which causes the helium ash produced by the thermonuclear fusion of hydrogen to circulate throughout the star rather than accumulate at its core. 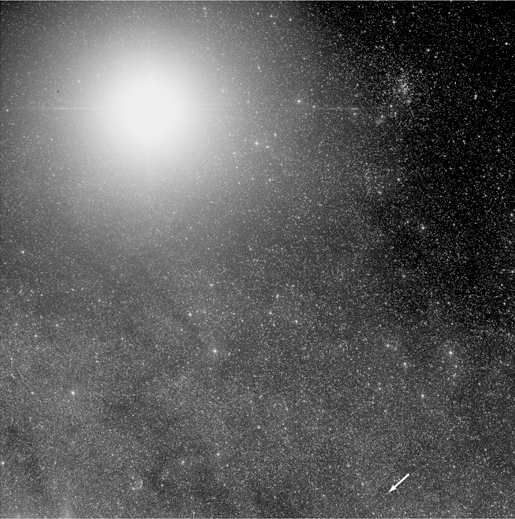 The stellar flares that briefly increase Proxima’s luminosity can be as large as the star and reach temperatures as high as 27 million K, high enough to emit X-rays. The star’s quiescent X-luminosity is about the same as that of the Sun, which is a significantly larger star.

Proxima Centauri has a luminosity only 0.17 percent that of the Sun and a diameter about a seventh of the Sun’s or 1.5 times that of Jupiter.

Proxima Centauri’s distance from the Milky Way’s centre varies from 8.3 to 9.5 kpc.

If the Sun were observed from Proxima Centauri, it would appear as a bright star located in the constellation Cassiopeia. The Sun’s apparent magnitude at this distance would be 0.4.

Proxima Centauri has been suspected to be a companion to the Alpha Centauri AB binary system since discovery, and is also sometimes called Alpha Centauri C. The three stars are the nearest stellar neighbours to the Sun.

The distance from Proxima to Alpha Centauri is just 0.21 light years, or 15,000 astronomical units. If Proxima is orbiting the Alpha Centauri system, it has an orbital period of 500,000 years or more. The odds that it is just a case of chance alignment are about one in a million, and Proxima most likely is gravitationally bound to the other two stars.

A triple star system like this one forms when a low-mass star like Proxima Centauri is dynamically captured by a more massive binary system within the stars’ embedded cluster before the cluster disperses.

Alpha and Proxima Centauri share a common proper motion with a triple star, two binary stars and six single stars, which means that they may form a moving group of stars with a common point of origin. If Proxima is not bound to the binary system, a stellar association like a moving group would explain its relative proximity to Alpha Centauri.

Alpha Centauri can easily be found in the sky from southern latitudes, as it is the brighter of the two stars that point to the Southern Cross asterism in the constellation Crux. The binary system can be resolved in a good small telescope.

Proxima Centauri, however, doesn’t even lie in the same field. It is located about two degrees to the south and one needs at least a large amateur telescope and good observing conditions to see it.