The Monkey Head Nebula is an emission nebula located in the constellation Orion, the Hunter. The nebula is an H II region, a large cloud of ionised gas in which new stars are being formed. The low-density cloud is a site of intense star formation.

The Monkey Head Nebula lies about 6,400 light years from Earth. It is associated with the open cluster NGC 2175. It has the designation NGC 2174 in the New General Catalogue.

The Monkey Head Nebula is located in the same region of the sky as the famous Orion Nebula, one of the brightest diffuse nebulae in the night sky. The Orion Nebula (Messier 42) was the first known H II region.

As the name suggests, it also lies in Orion constellation. However, while M42 lies in Orion’s Sword, the Monkey Head can be found above Betelgeuse, near Orion’s head.

To celebrate its 24th year in orbit, the NASA/ESA Hubble Space Telescope has released this beautiful new image of part of NGC 2174, also known as the Monkey Head Nebula. NGC 2174 lies about 6400 light-years away in the constellation of Orion (The Hunter). Hubble previously viewed this part of the sky back in 2011 — the colourful region is filled with young stars embedded within bright wisps of cosmic gas and dust. This portion of the Monkey Head Nebula was imaged in the infrared using Hubble’s Wide Field Camera 3. Image: NASA, ESA, and the Hubble Heritage Team (STScI/AURA)

NGC 2174 covers an area larger than the full Moon and can be seen in binoculars. However, one needs a larger telescope to make out any of the details.

The stellar nursery contains many young stars that are embedded within the surrounding dust and gas. These stars emit intense ultraviolet radiation which ionises the hydrogen gas, making the nebula glow.

The light and winds from the newly formed stars are dispersing the clouds in which the stars were formed. The nebula surrounds several loose clusters of young stars and will evaporate and disappear into the surrounding space within the next few million years.

The Monkey Head Nebula is located near the head of Orion, in the direction of Gemini constellation. It lies roughly a third of the distance from the bright star Alhena, Gamma Geminorum, to Elnath, Beta Tauri.

NGC 2175 is embedded in a diffuse nebula, designated Sh 2-252 in the Sharpless catalogue. 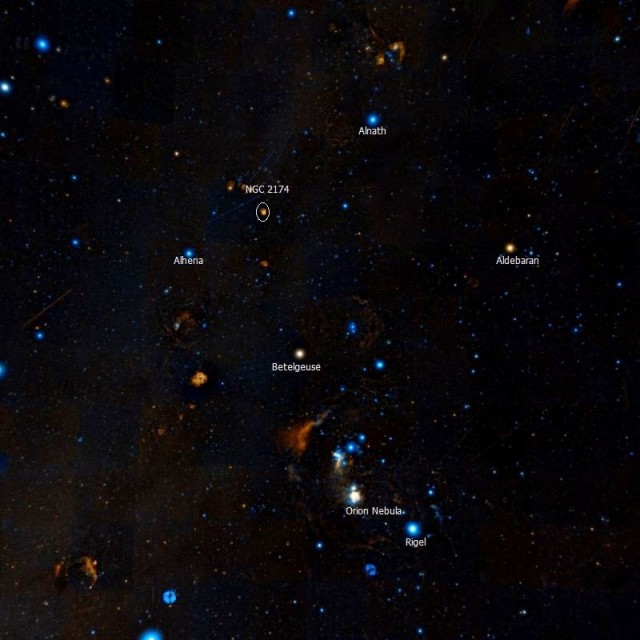 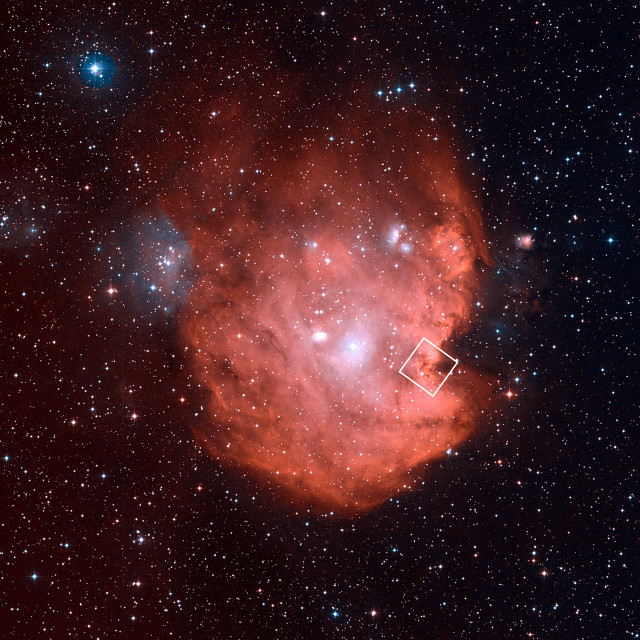 This image, a composite of red and blue exposures from the Digitized Sky Survey 2, shows the region of sky surrounding NGC 2174, more popularly known as the Monkey Head Nebula. To celebrate its 24th year observing Hubble revisited the Monkey Head Nebula and a brand new image was released of one of its breathtaking pillars. The small square near the centre of this image is where the pillar can be found. Image: NASA, ESA, Digitized Sky Survey (DSS), STScI/AURA, Palomar/Caltech 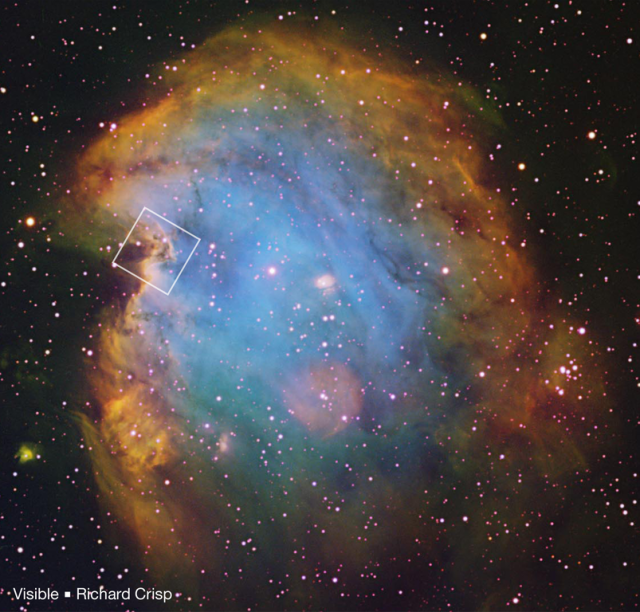 Location of the Hubble IR Detail in NGC 2174 Location of the Hubble IR Detail in NGC 2174 Click to Enlarge This image shows the region of NGC 2174, taken in infrared and released for Hubble’s 24th birthday, in its wider context. On the left is a ground based image taken by an amateur astrophotographer of the star-forming nebula in visible light, with an outline showing the area of the detailed Hubble image. On the right is a small detail of a star-forming column in the nebula, made by Hubble’s WFC3 infrared camera. Credit: NASA and ESA Acknowledgment: NASA, ESA, and the Hubble Heritage Team (STScI/AURA), and R. Crisp 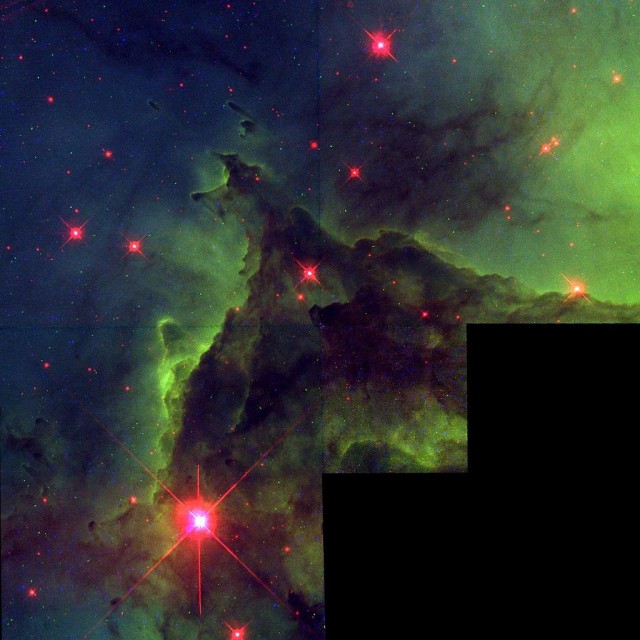 The NASA/ESA Hubble Space Telescope has imaged a violent stellar nursery called NGC 2174, in which stars are born in a first-come-first-served feeding frenzy for survival. The problem is that star formation is a very inefficient process; most of the ingredients to make stars are wasted as the cloud of gas and dust, or nebula, gradually disperses. In NGC 2174, the rate at which the nebula disperses is further speeded up by the presence of hot young stars, which create high velocity winds that blow the gas outwards. These fiery youngsters also bombard the surrounding gas with intense radiation, making it glow brightly, creating the brilliant scene captured here. The nebula is mostly composed of hydrogen gas, which is ionised by the ultraviolet radiation emitted by the hot stars, leading to the nebula’s alternative title as an HII region. This picture shows only part of the nebula, where dark dust clouds are strikingly silhouetted against the glowing gas. NGC 2174 lies about 6400 light-years away in the constellation of Orion (The Hunter). It is not part of the much more familiar Orion Nebula, which lies much closer to us. Despite its prime position in a very familiar constellation this nebula is faint and had to wait until 1877 for its discovery by the French astronomer Jean Marie Edouard Stephan using an 80 cm reflecting telescope at the Observatoire de Marseille. This picture was created from images from the Wide Field Planetary Camera 2 on Hubble. Images through four different filters were combined to make the view shown here. Images through a filter isolating the glow from ionised oxygen (F502N) were coloured blue and images through a filter showing glowing hydrogen (F656N) are green. Glowing ionised sulphur (F673N) and the view through a near-infrared filter (F814W) are both coloured red. The total exposure times per filter were 2600 s, 2600 s, 2600 s and 1000 s respectively and the field of view is about 1.8 arcminutes across. Image: ESA/Hubble & NASA