The Jewel Box Cluster, also known as the Kappa Crucis Cluster, is an open star cluster located in the southern constellation Crux.

The cluster has an apparent magnitude of 4.2 and lies at an approximate distance of 6,440 light years from Earth. It has the designation NGC 4755 in the New General Catalogue. The Jewel Box Cluster can easily be seen without binoculars and appears as a fuzzy star to the naked eye.

It is one of the finest objects in the southern sky, covering an area of 10 arc minutes, and best seen in binoculars and telescopes. Large binoculars and small telescopes easily resolve the pyramid shape formed by the cluster’s brightest stars.

This image is a “close-up” view from the NASA/ESA Hubble Space Telescope of NGC 4755, or the Jewel Box Cluster. Several very bright, pale blue super-giant stars (eg. κ Crucis on the left, HD 111934 on the lower right and HIP 62913 in the middle right), a solitary ruby-red super-giant (HIP 62918 – upper right) and a variety of other brilliantly coloured stars are visible in the image, as well as many much fainter ones, often with intriguing colours. The huge variety in brightness exists because the brighter stars are 15 to 20 times the mass of the Sun, while the dim points are less than half the mass of the Sun. This is the first image of an open galactic cluster with imaging extending from the far ultraviolet to the near-infra-red. Image: NASA/ESA and Jesús Maíz Apellániz (Instituto de Astrofísica de Andalucía, Spain), 2009

The Jewel Box is easy to find as it is located just a degree to the southeast of Beta Crucis (Mimosa), one of the bright stars that form the Southern Cross.

The cluster lies just outside the cross and is easily recognized for its A-shaped asterism, formed by its four bright stars, which are sometimes known as the “traffic lights“ because of their varying colours.

The Kappa Crucis Cluster is visible from southern latitudes throughout the year. It can’t be seen by northern observers, except for those living in tropical latitudes, who can briefly catch it near the southern horizon during the winter and spring.

The Jewel Box Cluster is one of the youngest known open clusters, with an estimated age of 14 million years. It is about 20 light years across and contains just over 100 stars. The brightest ones are supergiants. One of the cluster’s central stars is a red supergiant and stands in contrast to the nearby luminous, massive blue stars. These young, short-lived stars will likely explode as supernovae in the next few million years. While most sources cite the cluster’s age as 10 or more million years, some estimate it at only 7.1 million years.

The FORS1 instrument on the ESO Very Large Telescope (VLT) at ESO’s Paranal Observatory was used to take this exquisitely sharp close up view of the colourful Jewel Box Cluster, NGC 4755. The telescope’s huge mirror allowed very short exposure times: just 2.6 seconds through a blue filter (B), 1.3 seconds through a yellow/green filter (V) and 1.3 seconds through a red filter (R). Image: ESO/Y. Beletsky

The distance of the Jewel Box is estimated at 6,440 light years, but difficult to determine with certainty because some of the cluster’s light is blocked by the Coalsack Nebula. The Coalsack is the most prominent dark nebula in the sky, covering an area of about 7 by 5 degrees between the Southern Cross stars Acrux and Becrux. The nebula is about 60 to 70 light years across and lies at a distance of about 600 light years from Earth.

The Kappa Crucis Cluster was originally assigned the Bayer designation Kappa Crucis because it appeared as a star to Johann Bayer, the German astronomer who introduced the stellar designation system in 1603, in his star atlas Uranometria. Today, the name Kappa Crucis refers to one of the stars in the cluster, a blue supergiant (spectral class B3Ia) with a visual magnitude of 5.98 and an absolute magnitude of -6.0. The star is also catalogued as HD 111973, HIP 62931 and HR 4890. 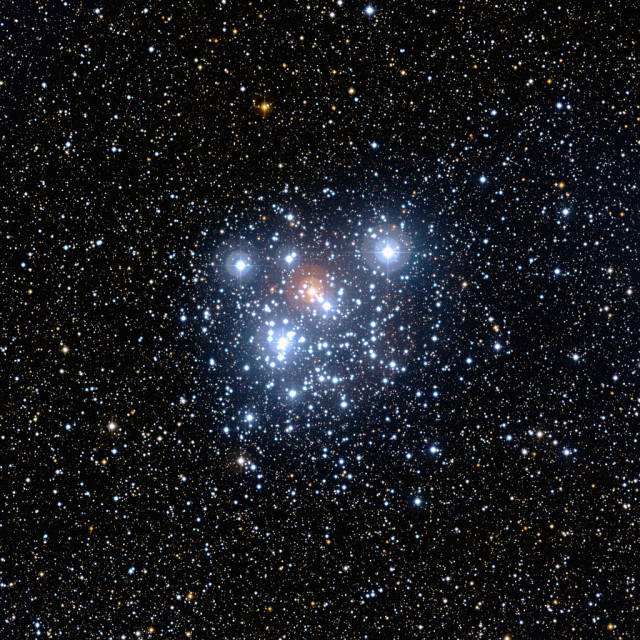 This image of the well-known NGC 4755 cluster or Jewel Box was taken with the Wide Field Imager (WFI) on the MPG/ESO 2.2-metre telescope at ESO’s La Silla Observatory. It highlights the cluster and its rich surroundings in all their multicoloured glory. Image: ESO

The Jewel Box Cluster was discovered by the French astronomer Nicolas Louis de Lacaille from the Cape of Good Hope in South Africa on March 25, 1752. Lacaille was the first to realize that the hazy star known as Kappa Crucis was in fact a “nebulous cluster.”

The cluster was named the Jewel Box by the English astronomer John Herschel, who described it as a “casket of variously coloured precious stones,” noting that, “this cluster, though neither a large nor a rich one, is yet an extremely brilliant and beautiful object when viewed through an instrument of sufficient aperture to show distinctly the very different colour of its constituent stars, which give it the effect of a superb piece of fancy jewellery.” Herschel also determined the positions of 100 stars in the cluster in the period from 1834 to 1838. This is why the cluster is sometimes also known as Herschel’s Jewel Box.

This composite image serves as a still “zoom-in”, showing the rich star field in which NGC 4755 nestles and then moving in to the detailed Hubble image of the Kappa Crucis Cluster, or Jewel Box, itself. The range of images begins with a very wide-field view of the sky surrounding NGC 4755. The images then progressively “zoom in” to reveal a “close-up” of the Jewel Box, featuring several very bright, pale blue super-giant stars, a solitary ruby-red super-giant and a variety of other brilliantly coloured stars. Image: ESO, NASA/ESA, Digitized Sky Survey 2 and Jesús Maíz Apellániz (Instituto de Astrofísica de Andalucía, Spain) 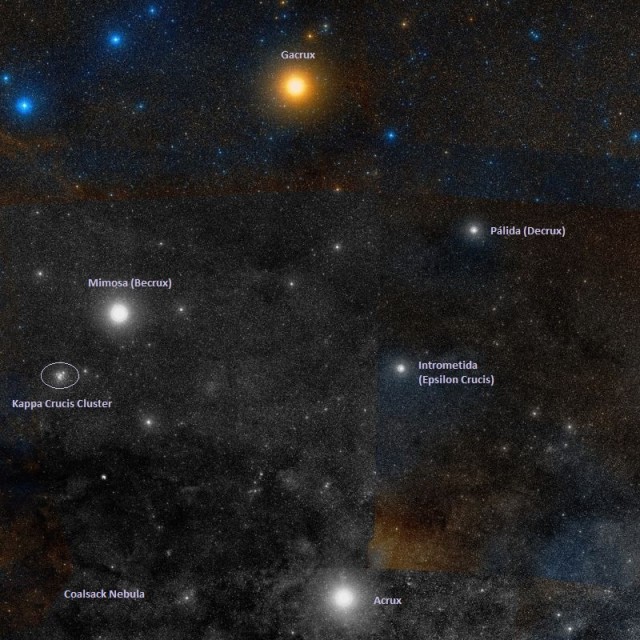 Hubble: Panning across the Jewel Box