The Jellyfish Nebula (IC 443, Sharpless 248) is a supernova remnant located in the constellation Gemini. It lies at an approximate distance of 5,000 light years from Earth and has an apparent magnitude of 12. The nebula can be found between the stars Mu and Eta Geminorum, at the foot of one of the celestial Twins.

The Jellyfish Nebula is a remnant of a supernova that occurred in the Milky Way between 3,000 and 30,000 years ago. The supernova event produced the nebula and the neutron star CXOU J061705.3+222127. The presence of the neutron star and the nebula’s location in a star forming region indicate that the remnant was created by a Type II supernova, one triggered by a rapid collapse and violent explosion of a star with a mass at least 8 times that of the Sun. The neutron star is moving away from the site at about 800,000 km/h. 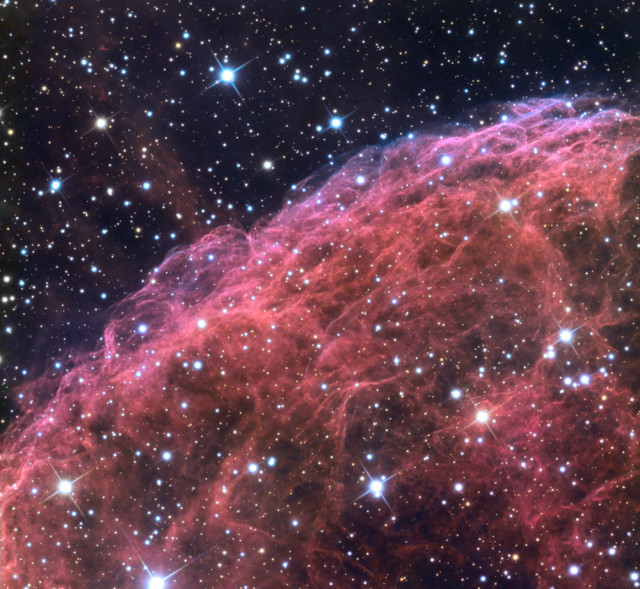 The nebula occupies an area of 50 arcminutes, appearing larger than the full Moon. It has a spatial diameter of about 70 light years, or 20 parsecs.

IC 443 is interacting with the surrounding molecular clouds and is one of the most studied supernova remnants in the sky. The remnant has evolved in the complex environment of the molecular cloud in which the progenitor star was still embedded when it ended its life. The interaction with the cloud has affected the nebula’s morphology. In the southeastern portion of the nebula, the molecular cloud is very dense and clumpy, and the nebula’s gas appears ring-like, while the northeastern part of the nebula is interacting with a wall of neutral hydrogen, a considerably less dense environment that allows the shock to travel at a much higher velocity. The nebula’s expansion to the west is exaggerated, while the expansion to the east is experiencing a compression effect.

In optical and radio wavelengths, the nebula appears shell-like and is composed of two sub-shells with different radii, emissions and centres. The larger northeastern shell was likely created by a shock wave travelling at about 100 km/s. It consists of complex filaments that are emitting light from iron, neon, silicon and oxygen atoms and dust particles, which are heated by the blast from the supernova event. The smaller southern shell, which was probably created by a shock wave moving at about 30 km/s, is composed of denser clumps that emit light mainly from hydrogen gas and hot dust. 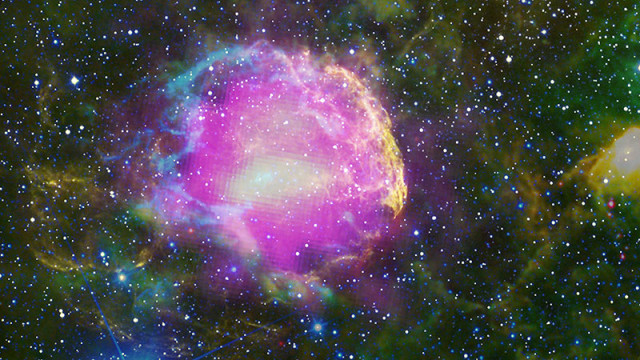 There is a third shell which is larger but, even though it was once believed to be part of the Jellyfish Nebula, it is now known to be older, with an estimated age of about 100,000 years. The larger shell is part of a different supernova remnant, designated as G189.6+3.3.

X-ray images reveal the nebula as centrally peaked, with a barely visible soft X-ray shell. In both optical and X-ray wavelengths, nebula’s emission is heavily absorbed by a huge molecular cloud located in the foreground. The cloud crosses the entire nebula from northwest to southeast. 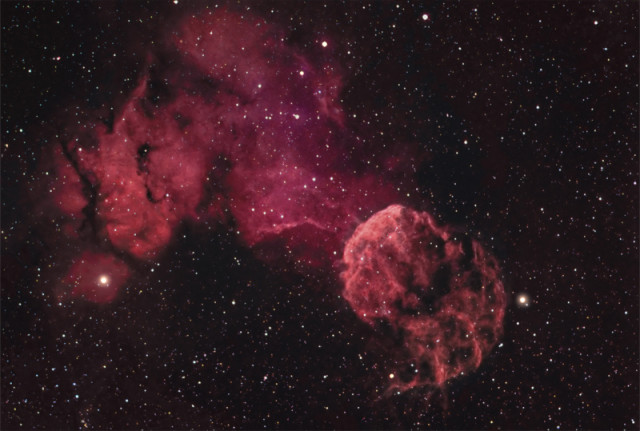 Observations with the Chandra X-ray Observatory and XMM-Newton have revealed a plerion nebula near the southern edge of the supernova remnant. A plerion, or pulsar wind nebula, is a nebula powered by the wind of a pulsar, a highly magnetized, rotating neutron star that emits electromagnetic radiation. Pulsar winds consist of charged particles that are accelerated to relativistic speed by the rapidly rotating, extremely strong magnetic field of the spinning pulsar.  The Crab Nebula (Messier 1) is a prototype of this class of nebulae. 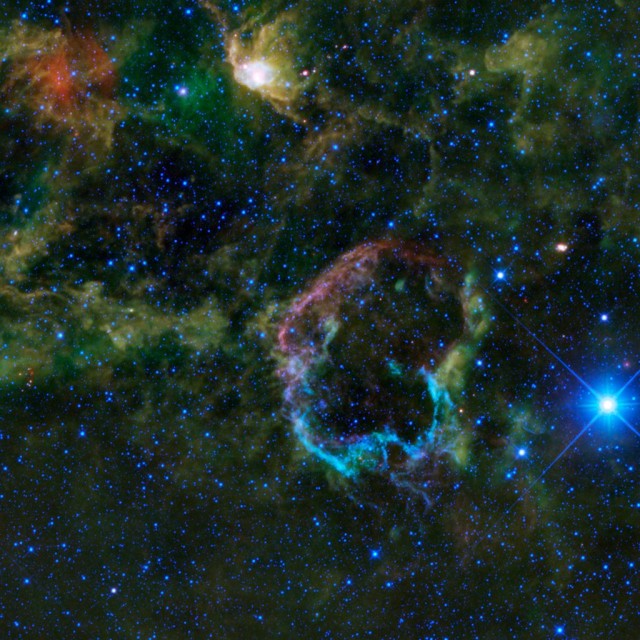 This oddly colourful nebula is the supernova remnant IC 443. IC 443 is the remains of a star that went supernova somewhere between 5,000 and 10,000 years ago. The blast from the supernova sent out shock waves that travelled through space, sweeping up and heating the surrounding gas and dust in the interstellar medium, and creating the supernova remnant seen in this image. What is unusual about the IC 443 is that its shell-like form has two halves that have different radii, structures and emissions. The larger north-eastern shell, seen here as the violet-coloured semi-circle on the top left of the supernova remnant, is composed of sheet-like filaments that are emitting light from iron, neon, silicon and oxygen gas atoms and dust particles heated by the blast from the supernova. The smaller southern shell, seen here in a bright cyan colour on the bottom half of the image, is constructed of denser clumps and knots primarily emitting light from hydrogen gas and heated dust. These clumps are part of a molecular cloud which can be seen in this image as the greenish cloud cutting across IC 443 from the north-west to south-east. The colour differences seen in this image represent different wavelengths of infrared emission. The differences in colour are also the result of differences in the energies of the shock waves hitting the interstellar medium. The north-eastern shell was probably created by a fast shock wave (100 kilometres per second), whereas the southern shell was probably created by a slow shock wave (30 kilometres per second). Image: NASA/JPL-Caltech/WISE Team 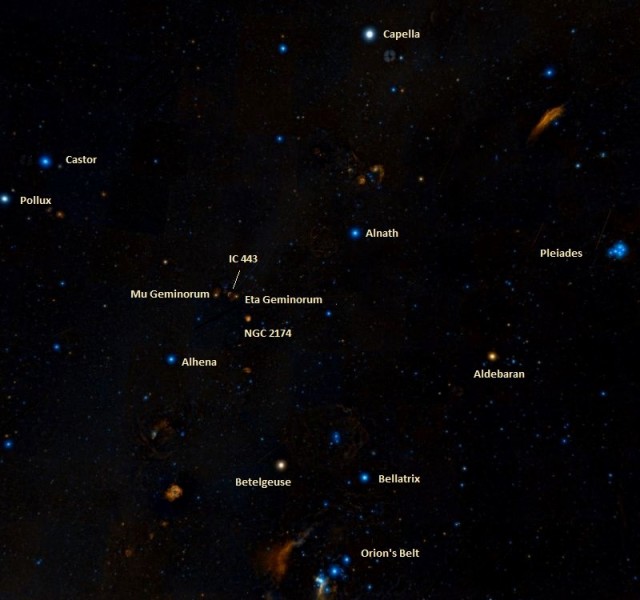