The Horsehead Nebula is a famous diffuse dark nebula found in the Orion Molecular Cloud Complex in the constellation Orion.

It is a dark cloud composed of dust and gas where star formation is taking place. The nebula is also known as Barnard 33, and is located in the emission nebula IC 434. The Horsehead Nebula is approximately 1,500 light years distant from Earth.

The Horsehead Nebula is one of the most easily identifiable nebulae in the sky as its shape resembles that of a horse’s head and neck when observed from Earth. The swirling clouds of gas and dark dust are lit by a pinkish glow of hydrogen gas located behind the nebula and ionized by the nearby bright star Sigma Orionis. Sigma Orionis, which is in fact a five-star system, illuminates the entire region. 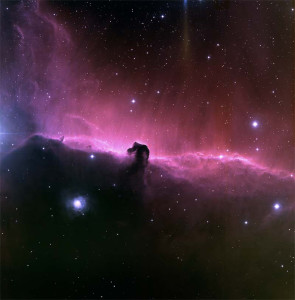 The brighter star visible in this area of the sky in images is Zeta Orionis, but it is located in the foreground and not related to the Horsehead Nebula.

The nebula formed from a collapse of an interstellar cloud of material and appears dark mainly because of the thick dust in the neighbouring area, with the bright spots at the base marking hidden protostars, newly formed or forming young stars.

The Horsehead can only be seen because its obscuring dust is silhouetted against the brighter nebula IC 434. The nebulous region that forms the horse’s head is just part of a larger dust cloud.

The nebula is really an extremely dense cloud projecting in front of the ionized hydrogen gas. This is revealed by the fact that lower side of the horse’s neck is particularly dark and casts a shadow to the east.

The glowing hydrogen gas marks the edge of the dark cloud that forms the nebula, which is evident in the notable change in the density of visible stars on either side of the cloud. The brighter region at the top left edge of the Horsehead is a young star still hidden in the gas and dust in which it was formed.

The jutting pillar that forms the Horsehead has a high density of helium and hydrogen, which makes it hard to erode. While the gas clouds that surrounded the nebula have already dissipated, it will be another five million years before the pillar dissipates too.

The Horsehead Nebula is one of the best known and most photographed stellar nurseries in the night sky. It can contain more than a hundred known gases, both organic and inorganic, and also complex, large organic molecules of dust.

The nebula was first recorded on a photographic plate in 1888 by the Scottish astronomer Williamina Fleming at the Harvard College Observatory.

In April 2013, the Hubble Space Telescope photographed the nebula in astounding detail, revealing two new stars located in the top ridge. NASA explained in a release that one of these stars is emitting “harsh ultraviolet glare” which is slowly stripping away the cloud. “Gas clouds surrounding the Horsehead already have dissipated, but the tip of the jutting pillar contains a slightly higher density of hydrogen and helium, laced with dust,” said NASA. “This casts a shadow that protects material behind it from being stripped away by intense stellar radiation evaporating the hydrogen cloud, and a pillar structure forms.” 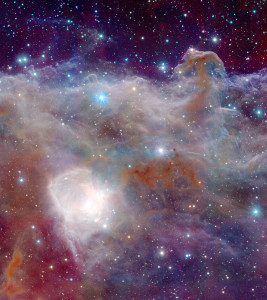 The wide-field VISTA view includes the glow of the reflection nebula NGC 2023, just below centre, and the ghostly outline of the Horsehead Nebula (Barnard 33) towards the lower right. Image: ESO/J. Emerson/VISTA

The Orion Molecular Cloud Complex, which contains the Horsehead Nebula, is also home to the famous Orion Nebula (Messier 42), the Flame Nebula (NGC 2024), and Barnard’s Loop.

As one of the nearest regions where massive stars are formed, the cloud complex is also most easily photographed, making these some of the most recognizable objects in the sky.

The Horsehead Nebula can be found just to the south of Alnitak, Zeta Orionis, the easternmost star of Orion’s Belt. It is 2-3 light years across and a challenging object to find with a small telescope.

The nebula appears shadowy in optical light, but transparent at infrared wavelengths, revealing the Milky Way and galaxies in the background. 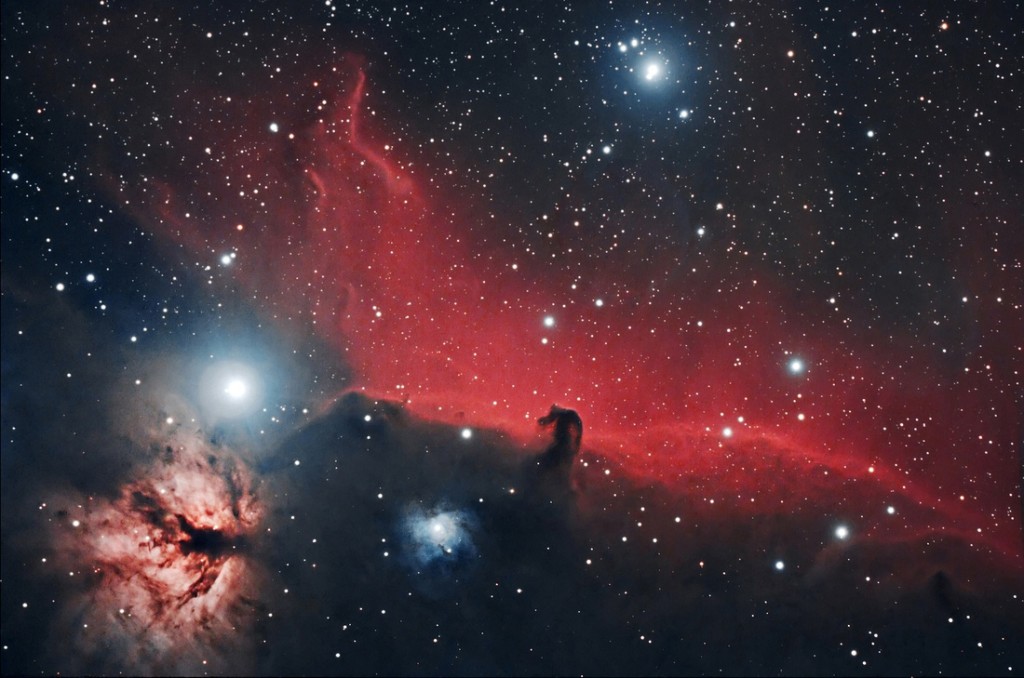 Region of the Horsehead Nebula south of star Alnitak in Orion, image: Hewholooks at wikipedia.org 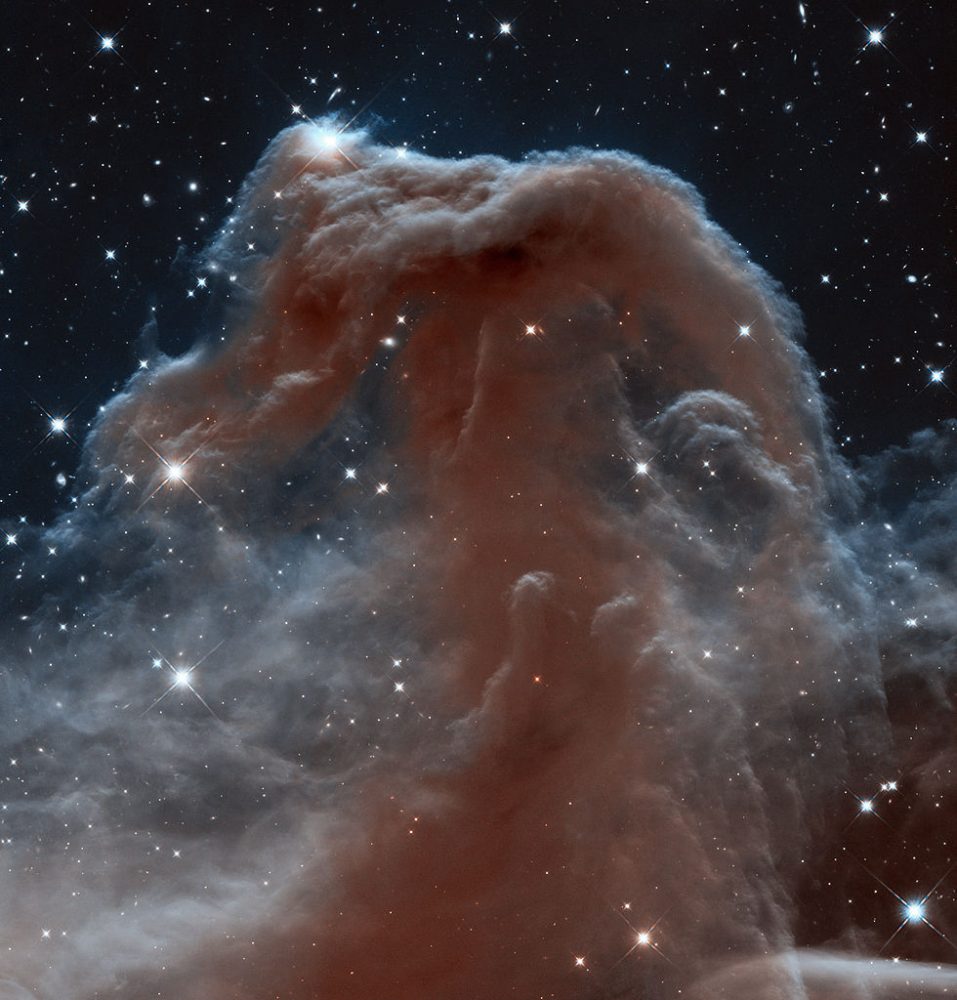 Astronomers have used NASA’s Hubble Space Telescope to photograph the iconic Horsehead Nebula in a new, infrared light to mark the 23rd anniversary of the famous observatory’s launch aboard the space shuttle Discovery on April 24, 1990. Looking like an apparition rising from whitecaps of interstellar foam, the iconic Horsehead Nebula has graced astronomy books ever since its discovery more than a century ago. The nebula is a favorite target for amateur and professional astronomers. It is shadowy in optical light. It appears transparent and ethereal when seen at infrared wavelengths. The rich tapestry of the Horsehead Nebula pops out against the backdrop of Milky Way stars and distant galaxies that easily are visible in infrared light. Hubble has been producing ground-breaking science for two decades. During that time, it has benefited from a slew of upgrades from space shuttle missions, including the 2009 addition of a new imaging workhorse, the high-resolution Wide Field Camera 3 that took the new portrait of the Horsehead. Image: NASA/ESA/Hubble Heritage Team 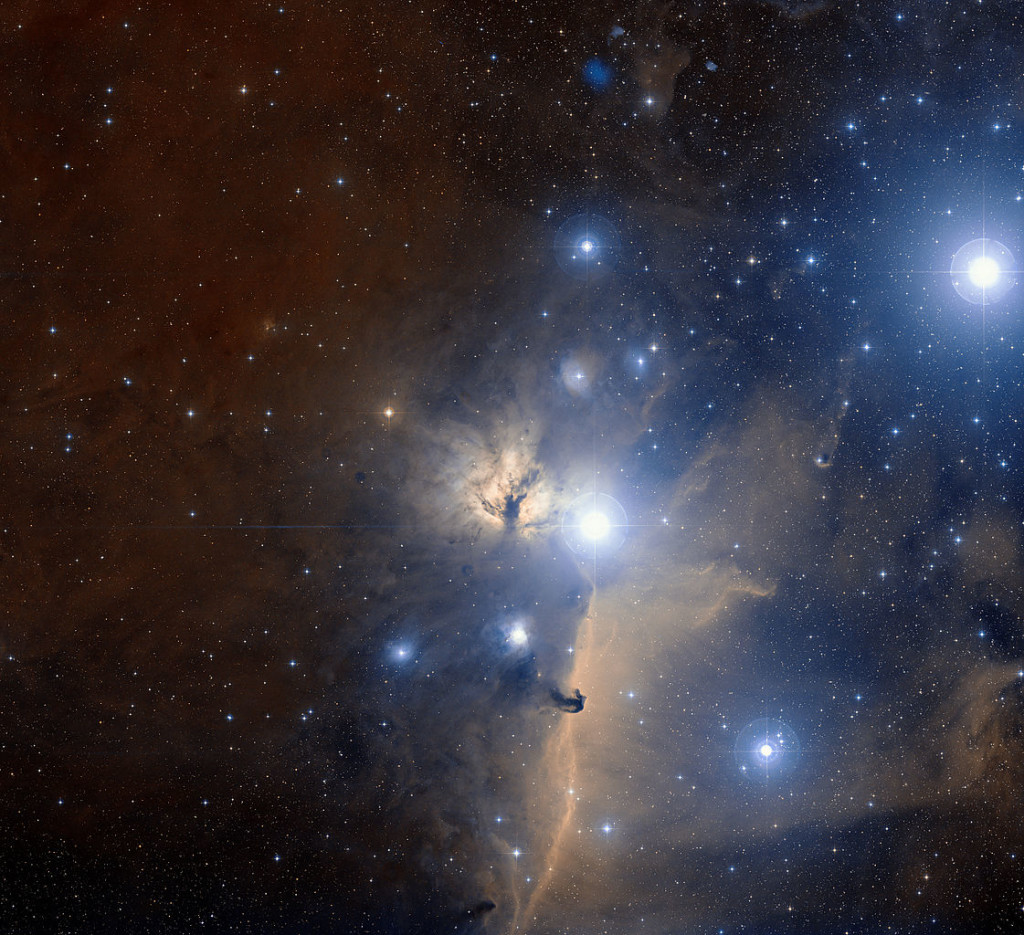 This spectacular visible light wide-field view of part of the famous belt of the great celestial hunter Orion shows the region of the sky around the Flame Nebula. The whole image is filled with glowing gas clouds illuminated by hot blue young stars. It was created from photographs in red and blue light forming part of the Digitized Sky Survey 2. The field of view is approximately three degrees. Image: ESO and Digitized Sky Survey 2 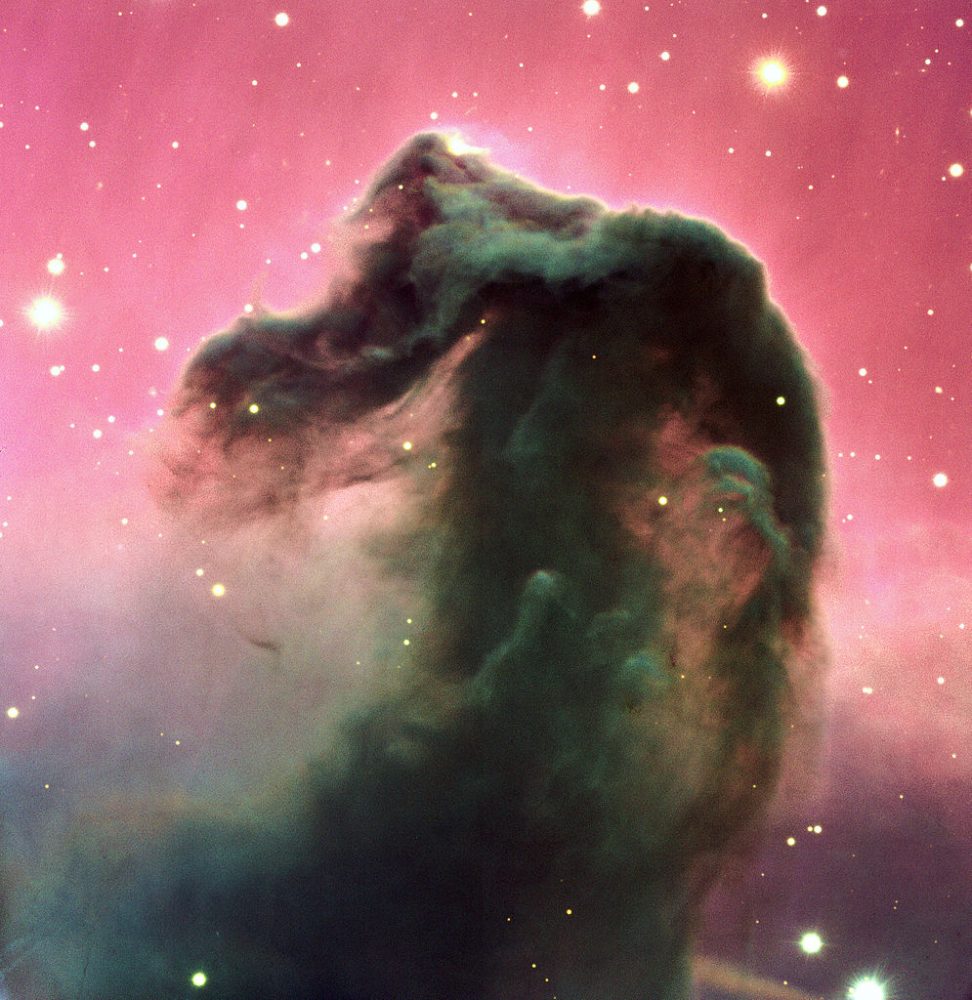 A reproduction of a composite colour image of the Horsehead Nebula and its immediate surroundings. It is based on three exposures in the visual part of the spectrum with the FORS2 multi-mode instrument at the 8.2-m KUEYEN telescope at Paranal. It was produced from three images, obtained on February 1, 2000, with the FORS2 multi-mode instrument at the 8.2-m KUEYEN Unit Telescope and extracted from the VLT Science Archive Facility . The frames were obtained in the B-band (600 sec exposure; wavelength 429 nm; FWHM 88 nm; here rendered as blue), V-band (300 sec; 554 nm; 112 nm; green) and R-band (120 sec; 655 nm; 165 nm; red). The original pixel size is 0.2 arcsec. The photo shows the full field recorded in all three colours, approximately 6.5 x 6.7 arcmin 2 . The seeing was about 0.75 arcsec. Image: ESO