The Elephant’s Trunk Nebula is a dense region of dust and gas found within the considerably larger star forming region IC 1396 in Cepheus constellation. Designated IC 1396A, the elongated globule of dust and gas was named the Elephant’s Trunk because it resembles an elephant’s head and trunk at visible wavelengths, appearing as a dark patch with a bright winding rim. It is located at a distance of 2,400 light years from Earth. 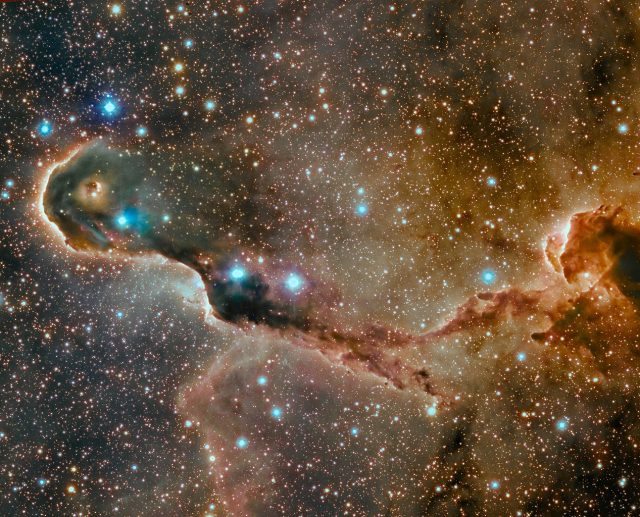 The large and relatively faint emission nebula IC 1396 is more than 100 light years across. The star responsible for its glow is the blue multiple star system HD 206267. The Elephant’s Trunk itself stretches over a region of 20 light years. The dark globule is eroded by the radiation pressure from the central star that illuminates the nebula. 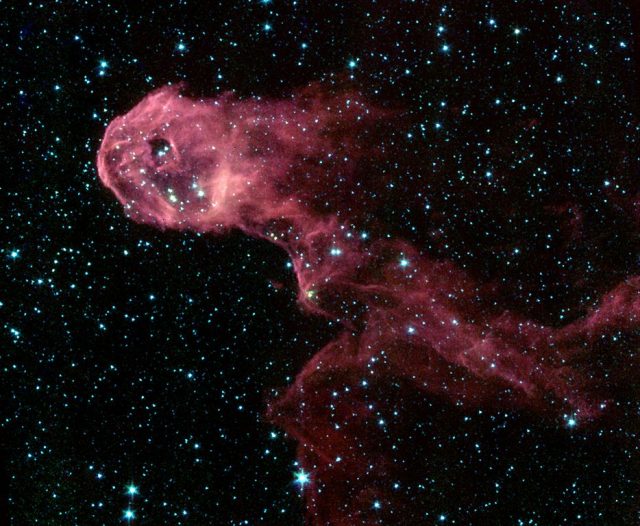 This NASA Spitzer Space Telescope image reveals a glowing stellar nursery embedded within the Elephant’s Trunk Nebula, an elongated dark globule within the emission nebula IC 1396 in the constellation of Cepheus. Located at a distance of 2,450 light-years, the globule is a condensation of dense gas that is barely surviving the strong ionizing radiation from a nearby massive star. The globule is being compressed by the surrounding ionized gas. The Spitzer Space Telescope pierces through the obscuration to reveal the birth of new protostars, or embryonic stars, and previously unseen young stars. The infrared image was obtained by Spitzer’s infrared array camera and is a four-color composite of invisible light, showing emissions from wavelengths of 3.6 microns (blue), 4.5 microns (green), 5.8 microns (orange) and 8.0 microns (red). The filamentary appearance of the globule results from the sculpting effects of competing physical processes. The winds from a massive star, located to the left of the image, produce a dense circular rim comprising the ‘head’ of the globule and a swept-back tail of gas. A pair of young stars (LkHa 349 and LkHa 349c) that formed from the dense gas has cleared a spherical cavity within the globule head. While one of these stars is significantly fainter than the other in visible-light images, they are of comparable brightness in the infrared Spitzer image. This implies the presence of a thick and dusty disc around LkHa 349c. Such circumstellar discs are the precursors of planetary systems. They are much thicker in the early stages of stellar formation when the placental planet-forming material (gas and dust) is still present. Credit: NASA/JPL-Caltech/W. Reach (SSC/Caltech)

The Elephant’s Trunk Nebula is a region of star formation, with more than 250 young stars identified within and around it. Several of these stars are very young, less than 100,000 years old. There are two stars with an estimated age of a couple of million years, found in a small cavity in the head of the Elephant’s Trunk. The newly born protostars were formed as a result of the pressure created by the high compression caused by the radiation of the massive central star and the winds from the young stars within the nebula. The radiation and stellar winds of the central star are eroding some of the nebula’s dust and gas while also compressing some of the material into clumps from which new stars are formed. 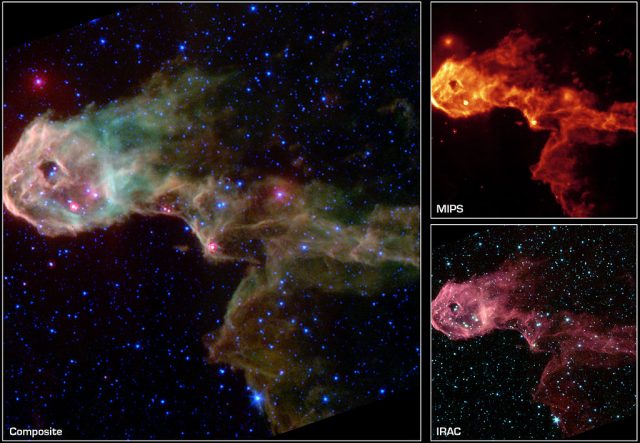 NASA’s Spitzer Space Telescope has captured a glowing stellar nursery within a dark globule that is opaque at visible light. These new images pierce through the obscuration to reveal the birth of new protostars, or embryonic stars, and young stars never before seen. Within the globule, a half dozen newly discovered protostars are easily discernible as the bright red-tinted objects, mostly along the southern rim of the globule. These were previously undetected at visible wavelengths due to obscuration by the thick cloud (‘globule body’) and by dust surrounding the newly forming stars. The newborn stars form in the dense gas because of compression by the wind and radiation from a nearby massive star (located outside the field of view to the left). The winds from this unseen star are also responsible for producing the spectacular filamentary appearance of the globule itself, which resembles that of a flying dragon. Image: NASA/JPL-Caltech/W. Reach (SSC/Caltech)

Many of the newly formed stars are embedded in regions of thick dust and gas and cannot be seen in visible light. They can, however, be detected in infrared wavelengths, including the very young stars that have only begun to shine. The glowing circumstellar disks of material that surround these stars make the stars bright in infrared images.  The disks are considerably thicker when the stars are still very young and they are very prominent in infrared light.

IC 1396 contains a number of globules similar to the Elephant’s Trunk, differing in size and shape. These appear as black silhouettes positioned against the nebula’s bright clouds of gas. 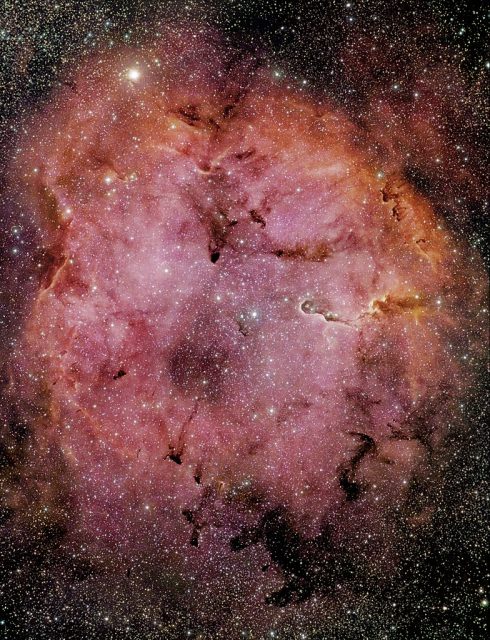 The brightest star visible in the region is Mu Cephei, also known as Herschel’s Garnet Star. The luminous red supergiant or hypergiant appears at the nebula’s edge and lies at a distance of 2,840 light years from Earth. It is one of the largest known stars, as well as one of the reddest stars in the sky. It has a radius 1,260 to 1,650 times that of the Sun. If it were placed within our solar system, it would reach between the orbits of Jupiter and Saturn. 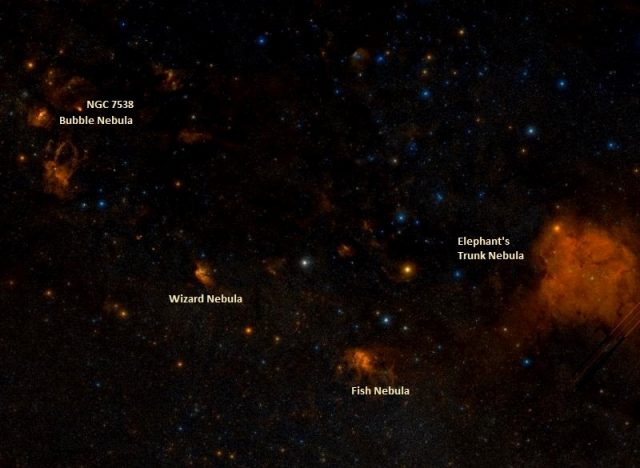