The Crystal Ball Nebula (NGC 1514) is a planetary nebula located in the constellation Taurus, near the border with Perseus. It has an apparent magnitude of 9.43 and lies at an approximate distance of 2,200 light years (700 parsecs) from Earth. It occupies an area of 2.2 arc minutes. 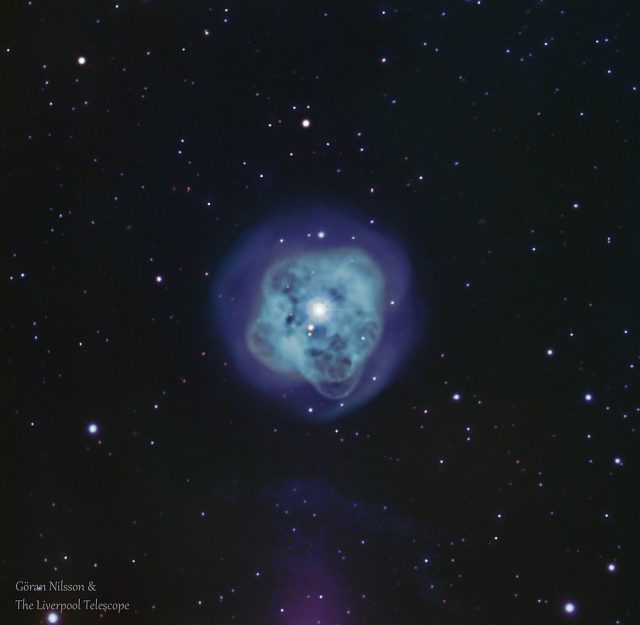 Planetary nebulae are formed when a dying star expels its outer layers of material. They are illuminated by the ultraviolet light from their central star (or stars if it is a binary system), which makes them glow in various colours. They keep expanding away from the star and ultimately disperse into the surrounding space. The estimated expansion rate of NGC 1514 is 25 km/s.

Astronomers have proposed that the nebula surrounds a binary star in a close orbit with a period of 4 to 9 days. The larger primary component in the system is believed to be the source of the expanding gas. A study published in 2003 suggests that the initial mass of the progenitor star was 4.5 solar masses and that the nebula is a product of a common envelope, which forms in close interacting binary systems if there is mass transfer from the primary to the secondary star.

The nebula’s rings, which cannot be seen in visible light, were only discovered in the last decade by the WISE science team at NASA’s Jet Propulsion Laboratory in California, who observed the nebula in infrared light. They believe that the structure of NGC 1514 is similar to other nebulae with an hourglass shape, including the Engraved Hourglass Nebula (MyCn 18) in the constellation Musca, whose rings can be detected at visible wavelengths. 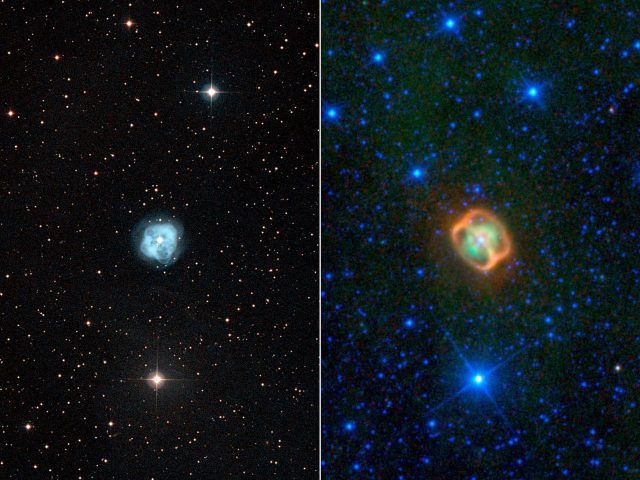 This image composite shows two views of a puffy, dying star, or planetary nebula, known as NGC 1514. The view on the left is from a ground-based, visible-light telescope; the view on the right shows the object in infrared light, as seen by NASA’s Wide-field Infrared Survey Explorer, or WISE. The object is actually a pair of stars — one star is a dying giant somewhat heavier and hotter than our sun, and the other was an even larger star that has now contracted into a dense body called a white dwarf. As the giant star ages, it sheds some its outer layers of material to form a large bubble around the two stars. Jets of material from the white dwarf are thought to have smashed into this bubble wall. The areas where the jets hit the cavity walls appear as orange rings in the WISE image. This is because dust in the rings is being heated and glows with infrared light that WISE detects. The green cloud seen in the WISE view is an inner shell of previously shed material. In the visible image, this shell is seen in bright, light blues. An outer shell can also be seen in the visible image in more translucent shades of blue. This outer shell is too faint to be seen by WISE. Image: NASA/JPL-Caltech/UCLA/Digitized Sky Survey/STScI

The Crystal Ball Nebula was discovered in November 1790 by William Herschel, the astronomer who had previously coined the term “planetary nebulae” to describe similar deep sky objects with circular shapes resembling those of planets. Before the discovery of NGC 1514, Herschel had believed that nebulae were really densely grouped stars too distant to be resolved in a telescope. NGC 1514 made him rethink his beliefs. He described the nebula as a “most singular phaenomenon,” noting that “the nebulosity about the star is not of a starry nature.”

The Crystal Ball Nebula lies on the border of Taurus and Perseus. The closest bright star in the area is Zeta Persei, a blue supergiant with a visual magnitude of 2.86. Psi Tauri (ψ Tauri) appears somewhat closer to the nebula, but with a magnitude of 5.22, it is not visible from light-polluted areas.