Comet Catalina (C/2013 US10) is a comet from the Oort Cloud currently making its first and only visit to the inner solar system. The comet was first discovered on October 31, 2013 by the Catalina Sky Survey using a 27-inch Schmidt-Cassegrain telescope. At the time of discovery, it had an apparent magnitude of 19. Since September 2015, it has been around magnitude 6.

Comet Catalina has a chaotic orbit and, before coming into the planetary region, it had an orbital period of several million years. Once it leaves this region as it makes its last orbit around the Sun, C/2013 US10 will be on an ejection trajectory and disappear from the solar system forever. The comet’s journey could continue for billions of years unless it collides with another object.

The comet has two tails pointing in different directions, one made of dust and the other of gas. It has been visible from northern latitudes since late November and will reach its peak magnitude in mid-January. At magnitude 6, C/2013 US10 is just beyond naked eye visibility, but can be seen with binoculars. The comet’s tails can be seen in images with a few seconds of exposure.

On January 1, 2016, the comet was visible near the bright star Arcturus in Boötes constellation and is now slowly moving in the direction of Alkaid in Ursa Major. It will make its closest approach to Earth on January 17, when it comes within 108 million kilometres, or 67 million miles (0.72 AU), and be visible near the bright stars of the Big Dipper. The comet will still be around magnitude 6 and start appearing earlier in the hours before dawn. To see the trajectory of the comet, visit Sky and Telescope. 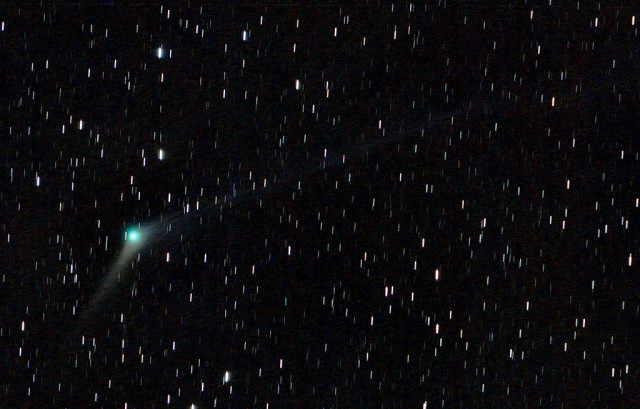 Comet Catalina is between 4 and 20 km in diameter. When it makes its closest approach to Earth, it will still be at a greater distance than the Moon (384,000 km), so there is no danger of collision.

The comet’s home, the Oort Cloud, is a thick cloud of icy asteroids, comets, proto-planets and debris that surrounds the solar system. It may extend for between 5,000 and 100,000 astronomical units. It was also home to the comets C/2012 S1, also known as ISON, and C/2013 A1 Siding Spring. The first of these was destroyed when it came too close to the Sun and the second made a close approach to Mars and will return to the inner solar system in about 740,000 years.