Antares, also known as Alpha Scorpii or Cor Scorpii, is the brightest star in Scorpius and the 15th brightest star in the night sky. Antares is a class M red supergiant marking the heart of the celestial scorpion. It lies at a distance of 550 light years from Earth.

The star is often confused for Mars, the red planet, by observers because it lies within the zodiac, which contains the apparent path of the Sun and planets of the solar system, and the two sometimes appear in the same area of the sky.

Antares was named for its resemblance to Mars, as they both appear reddish in colour. The comparison may have originated with early Mesopotamian astronomers.

The name Antares, or Ant-Ares, is derived from the Greek Άντάρης, which means “like Mars,” “rival of Mars” or “anti-Mars”, with Ares being the Greek equivalent to Mars, the Roman god of war. Mars appears much brighter than Antares for a few months every couple of years, but normally it is either much fainter or about as bright as the star. Mars passes near Antares every couple of years, which may have been interpreted by ancient observers as taunting.

A different theory suggests that Antares was named after the Arab warrior-hero Antar (Antarah ibn Shaddad), celebrated in the the Golden Mu’allaqat. Antar was a son of an African slave woman and an Arab sheikh. He was a slave himself until his father called him to battle and he proved himself to be the bravest warrior in Arabia.

Antares is an evolved star nearing the end of its life. It has the stellar classification M1.5Iab-b. The star will soon run out of fuel to burn, collapse, and explode as a brilliant supernova. This could happen today or a million years from now. The supernova event will leave behind either a tiny neutron star or a black hole. The event will be a spectacular sight from Earth. It may even be bright enough to cast shadows in the night for a few weeks. 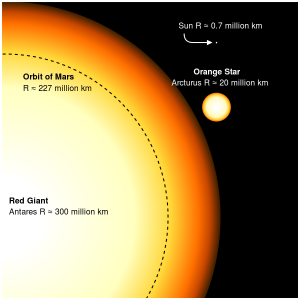 Comparison between the red supergiant Antares and the Sun, shown as the tiny dot toward the upper right. The black circle is the size of the orbit of Mars. Arcturus is also included in the picture for size comparison. Image: Sakurambo at en.wikipedia.org

The radius of Antares is about 883 times that of the Sun. Placed in the centre of our solar system, Antares would engulf the orbit of Mars and its outer surface would lie between the orbits of Mars and Jupiter. Antares is a relatively cool star, and it is not its temperature, but its enormous size and relative proximity to Earth that make it appear so bright.

Alpha Scorpii is circumpolar south of latitude 67°S. It never sets below the horizon for observers in the southernmost latitudes. The star can be seen from most of the northern hemisphere, or from any location south of 63°N, for at least a short period of time every year.

Antares is often compared to Betelgeuse, another famous red supergiant, located in the constellation Orion, which lies on the opposite side of the sky. Antares is somewhat larger, but not quite as bright as Betelgeuse. Mars passes near Betelgeuse every couple of years, too, but never gets as close to the star as it does to Antares, and is not associated with it in different tales and myths.

In mythology, Orion was stung by a scorpion for being too boastful and the two were placed on opposite sides of the sky, so that they are never seen at the same time. Orion still appears to be fleeing from the scorpion.

Antares is a binary star system consisting of an enormous red supergiant and a smaller but hotter companion. Antares A, the primary component in the system, has a radius in excess of 3 astronomical units, or three times the Earth’s average distance from the Sun. Unlike low-mass stars like our Sun, which stay on the main sequence for several billion years, stars as massive as Antares go through their fuel supply very quickly and, as a result, they reach the end of their life cycle within only a few million years. With an estimated age of 12 million years, Antares is nearing the end of its life and is expected to explode as a supernova within the next million years. 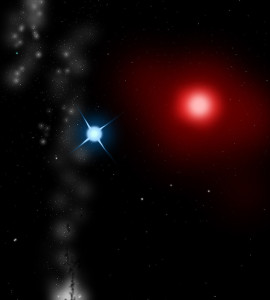 Antares A; an LC type variable red giant star, and Antares B, a class B2.5V blue main sequence star, make up a binary star system in the Scorpius constellation. Antares B is four solar radii, making it an average sized star, however Antares A is 800 solar radii, and were it placed in the center of our solar system, its corona would reach Jupiter. Note: this is NOT a size-comparison image, Antares B is far smaller than A. Image: Sephirohq at wikipedia.org

The companion, Antares B, is a bluish-white fifth magnitude star that lies only about 3 arcseconds away from Antares A and is hidden in the light of the larger star. It has been polluted by matter thrown off by Antares A. The two stars are separated by around 550 astronomical units and have an orbital period of about 2,500 years.

Antares B belongs to the spectral class B2.5 and has a visual magnitude of 5.5, which means that it is 370 times dimmer than Antares A. This, however, doesn’t mean that it is not luminous. Antares B has a luminosity roughly 170 times that of the Sun.

Antares B was at an angular separation of 3.3 arcseconds from Antares A in 1854. By 1990, the separation changed to 2.86 arcseconds, which equals a projected separation of around 529 astronomical units.

The companion star is buried within the stellar wind of Antares A and can appear green as a result of contrast with the large red star or as a result of mixing of the light when the two stars are seen too close together to be completely resolved. The mass of Antares B puts the star below the supernova limit. It will likely end its life as a massive white dwarf.

Antares B was discovered by the Austrian astronomer Johann Tobias Bürg on April 13, 1819, during one such lunar occultation. Some thought it was only the light of Antares A seen through the Moon’s atmosphere (theorized to exist at the time), and the companion’s existence was not confirmed until 1846.

Antares is sometimes listed as the 16th brightest star in the sky, depending on how the two brighter stars in the Capella multiple star system are counted. Each of the two bright components of the Capella system (located in Auriga) is brighter than Antares, but as they belong to the same system and appear as a single star to the naked eye, they are sometimes counted as one. 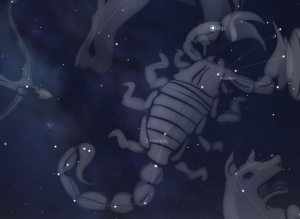 Antares is classified as a type LC slow irregular variable star. Its brightness can vary by several tenths of a magnitude, from +0.88 to +1.16, over a period of years. The star has an average visual magnitude of 1.09.

Antares is rapidly losing mass as a result of a strong wind.

The star’s visual luminosity is roughly 10,000 times that of the Sun. However, as Antares radiates a lot of its energy in the infrared part of the spectrum, the star’s bolometric luminosity is considerably greater, about 65,000 times that of the Sun. Antares has a relatively cool surface, about 3,400 K, and radiates a significant amount of energy in the invisible infrared.

Antares is part of a group of stars known as the “Royal Stars of Persia” together with Aldebaran in Taurus, Fomalhaut in Piscis Austrinus, and Regulus in Leo constellation.

Every year around November 30, Antares comes near the Sun. The date may vary from year to year, but it generally falls between November 30 and December 2. For about two or three weeks on either side of the conjunction, Antares can’t be seen in the night sky. The period of the star’s invisibility is longer in northern latitudes because the star lies significantly to the south of the celestial equator.

Alpha Scorpii is the most evolved star in the Scorpius-Centaurus Association, a nearby OB association, a group of stars that share a common proper motion through space. Antares is the brightest and most massive member of the group. It belongs to the Upper Scorpius subgroup of the larger association. The Scorpius-Centaurus Association contains thousands of stellar members with a mean age of 11 million years, located at a distance of about 470 light years, or 145 parsecs. 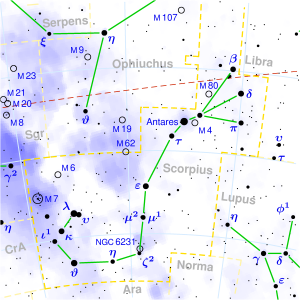 Antares is moving through the Milky Way Galaxy at a speed of 20.7 km/s relative to our Sun. The star’s projected galactic orbit takes it between 20,400 and 23,900 light years from the Milky Way’s centre.

Antares has been known by many names across different cultures. In Persia, the star was known as Satevis, one of the “royal stars.” In Mesopotamia, the names associated with the star include Dar Lugal (“the King”), Masu Sar (“the Hero and the King”), Kakkab Bir (“the Vermilion Star”), Urbat, Bilu-sha-ziri (“the Lord of the Seed”), and Kak-shisa (“the Creator of Prosperity”).

The ancient Chinese called Antares the Fire Star. Scorpius constellation was not associated with a scorpion figure by the Chinese, but was a major part of a celestial figure known as the Dragon of the East or the Azure Dragon. The dragon was not seen as a destructive figure, but represented the wisdom and majesty of the power of nature.

Antares was called Rehua by the Māori people of New Zealand, who saw the red supergiant as the chief of all the stars. Rehua is the father of Puanga, represented by Rigel in Orion, a star used in the calculation of the Māori calendar.

Many of the star’s names are associated with the scorpion. To the Egyptians, Antares represented the scorpio goddess Selkit (Serket), and also served as the symbol of Isis in different ceremonies. The ancient Greek name for the star, Καρδιά Σκορπιού (Kardia Skorpiū), meaning “the heart of the scorpion,” was translated into Arabic as Qalb al-Άqrab, and Arabs knew the star as Calbalakrab. The name was also translated into Latin as Cor Scorpii, one of the names still used for the star.

Babylonian astronomers listed Antares as GABA GIR.TAB in MUL.APIN. The name means “the breast of the scorpion.”